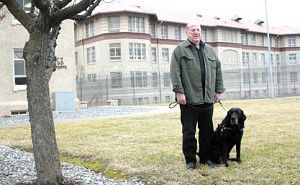 Doug Jerome is the first U.S. Episcopalian priest ordained solely for ministry inside prisons. He teaches inside the Eastern Oregon Correctional Institution. 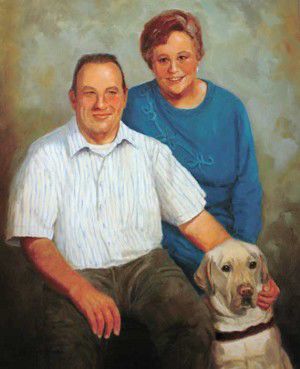 Doug Jerome is the first U.S. Episcopalian priest ordained solely for ministry inside prisons. He teaches inside the Eastern Oregon Correctional Institution.

Doug Jerome still has trouble being blind. He occasionally bumps into posts, stumbles over his grandchildren's toys and misidentifies voices.

He occasionally sits on his cat, Sweet Pea, who likes to curl up in his favorite chair.

However, though he's still not the perfect blind man, he's carved out a new and vigorous life for himself since darkness descended upon him 15 years ago. Jerome, 69, who once conducted energy audits as a small business owner, now is an Episcopalian priest who calls the Eastern Oregon Correctional Institution his church.

Previously, Jerome attended church only sporadically. It took blindness, he said, to make him see the light.

Blindness is relatively new for Jerome and came in 1993 as the result of a heart attack.

Jerome had just arrived home after hunting. He wandered into the backyard and started splitting wood for his stove. Suddenly, he felt funny.

"My chest felt like I'd just taken a deep breath in 20-degree weather," he said.

He carefully put his tools away, then collapsed by the front door, where his wife Phyllis found him. Soon, an emergency room doctor was telling Phyllis that her husband might not make it. Medics laid him on a gurney and loaded him in a helicopter bound for a Portland hospital.

The doctors did angioplasty to widen a coronary artery. Things went awry, however, Jerome said, when the artery didn't seal and he bled internally for about four hours.

His body, from his belly to his toes, turned black from the internal blood seepage and affected his eyes. When he awoke, he saw only the dimmest light.

"His eyes were open," said his wife, Phyllis, "but there was no recognition in them."

His last clear vision had come as the helicopter lifted off in Pendleton.

Thousands of Doug Jerome's pocket crosses have traveled to military personnel in Iraq, Afghanistan and other parts of the world.

Photo by by Kathy Aney

"I looked out the tail end of the chopper and saw Phyllis standing with a priest," Jerome said.

Home in Pendleton, Jerome said he sat in a living room chair, depressed, for about a month.

"I went through all five stages of grief," he said.

When he got to the anger stage, he looked heavenward.

"I was especially mad at God," Jerome said.

Finally, family members prodded him to leave the recliner and get on with life. A mobility specialist helped him learn to navigate Pendleton with a cane. One day, despite his cane, he walked into a power pole headfirst. He decided to get a guide dog.

He traveled to San Rafael, Calif., to Guide Dogs for the Blind and trained for a month with his first dog, Brogan, a yellow lab.

"Brogan and I bonded immediately," Jerome said. "He wouldn't leave my side."

Together, he and Brogan learned the town. Brogan died at age 13 and Jerome now has a new sidekick, Taz, a black lab.

Jerome's initial anger at God disappeared. Inside Jerome, sparks of spirituality grew to flame. He started attending church regularly again and gradually evolved into a man of deep faith.

"Now, I have my dog on my left hand and God on my right," Jerome said.

Early in his blindness, Jerome visited an EOCI program called Pathfinders and talked to inmates about dealing with hardship. He found himself caring deeply about the men.

"The steel doors slammed shut - that spooked me a little," he said. "I walked into a room with 25 guys and walked out with a new outlook."

Jerome found he had a heart for these men who had lost their way. Eventually, the Episcopal Church granted Jerome's application to become a priest, the first U.S. priest ordained solely to minister inside prisons, Jerome said. Murderers, rapists, arsonists, embezzlers, kidnappers, robbers - these were his parishioners now.

Each week, Jerome guides a discussion group called Education for Ministry. A dozen inmates, dressed in varying shades of blue, discuss theology as Taz snoozes nearby on the cool tile floor. On Christmas and Easter mornings, Jerome and his wife lead prison worship services. He has baptized seven inmates this year already.

The inmates seem to connect with Jerome.

"He's not a con, but he's familiar with hardship," said John Wills, a member of Jerome's discussion group. "He's able to cross the boundaries."

"I see Doug as a symbol of hope and inspiration," said inmate David Hill.

Jerome, they say, is able to bring out the good person living inside each of them.

At this year's Relay for Life event at the prison track, Jerome walked with inmates, stopping only to badger participants in a prison baseball game.

Jerome and a team of others visit local care facilities on Sundays to give communion and scripture readings. One Sunday a month, Jerome preaches at St. John's Episcopal Church in Hermiston.

Jerome still finds time to nurture his love of nature. A lifelong hunter, Jerome doesn't let a little thing like blindness get in his way of hunting deer and elk. His son Jim mounted a pistol scope on his rifle so either he or Jerome's son-in-law Cody Pursel can sit behind him and give him verbal commands.

"The deer have to want to commit suicide," Jerome maintains.

He has shot five elk and 15 deer since becoming blind. He also serves on the board of the Oregon Hunter Association of the Columbia Basin.

About eight years ago, Jerome found another passion. He sands and polishes wooden crosses cut out by friends and sends them around the world, mostly to military personnel. He's sent 5,000 crosses to the Middle East alone.

Most of the pocket crosses are made of juniper, though some are of other woods, such as mahogany. His dog wears one made of black walnut.

A waitress as Miss Patti's, Barb Bertels, has connections with the Obama campaign and sent to two to Joe Biden with a letter about Jerome. Bertels suggested Biden and Obama slip the crosses into their pockets for the inauguration, but no word came back on whether the crosses made it to the swearing in ceremony.

Bertels is effusive about Jerome.

"He's one of the most interesting people you'll ever come across," she said. "One person can make a world of difference - he's one of those people."