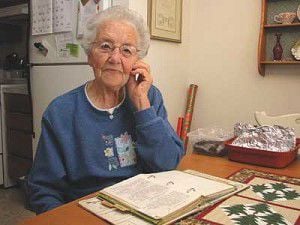 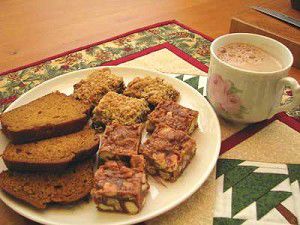 PILOT ROCK - Barbara Rugg graduated from Pilot Rock High School in 1932, but she was cooking long before that.

"My mother believed in my working in the summer," Barbara said, sitting at the table in her apartment in Birch Creek Manor, surrounded by a collection of heirloom china. "I worked for families that had hay crews, and often the whole responsibility of feeding them was turned over to me. Either you learned or they starved."

Barbara attended Eastern Oregon in La Grande and then taught at a one-room school on Stewart Creek, where she had the two Matthews brothers and the two Porter brothers as students. She boarded nearby with the Rugg family, and after two years of teaching married their son.

All those years of cooking for the haying crews paid off as she prepared meals for her own growing family. Barbara has three children, eight grandchildren and, at last count, 10 great-grandchildren. She expects two of the youngest generation at Christmas dinner this year.

In 1994 Barbara left the big house on Stewart Creek to her son Tom and his family and retired to Birch Creek Manor. Life didn't get any quieter, though. Barbara goes to town regularly, and reads each week with students at Pilot Rock Elementary School. This has been a particularly memorable year, with her son Tom taking her up in his light plane and a ride in a hot air balloon in September.

A few weeks before Christmas Barbara was busy making cookies and candies to give as thank-you and friendship gifts. She likes to arrange them on plates and deliver them early, before people get a rush of Christmas treats.

"Desserts were probably my favorite when I started cooking," she said. "My mother always said a meal isn't done until I've had something sweet at the end of it. I think I inherited that."

This year she made matrimonial bars, pumpkin bread, and a confection she calls Dorothy Stockman's candies.

"I always enjoy making rolled cookies, but they're more work, and now I have great-grandchildren whose grandmother makes those. So I tried to think of something we could share that would be different," Barbara said.

Barbara likes to serve her own hot cocoa blend with the Christmas cookies and candy. She got the recipe a couple of years ago from her friend Anita Hutchinson. The recipe doesn't cost any less than hot cocoa from the grocery store, but it's quite a bit richer.

"It almost has the feel and texture of marshmallows melted into it, even though it doesn't have any," Barbara said.

She poured hot cocoa into two cups that once belonged to her father's mother, Amanda Etter, and remembered a story from her childhood.

"I would stand on a chair by the wood cook stove and wash these cups in an old tin pan of soapy water," Barbara said. "When we were married my grandmother said I'd enjoyed washing them so much that she gave them to me."

Barbara Rugg says Dorothy Stockman paid for a copy of this recipe from a famous place in Chicago, then handed it out to her friends. This year Barbara couldn't find the Brazil nuts, but the candy tasted fine without them.

1/2 pound each of walnuts, almonds, filberts and Brazil nuts, chopped

Place the ground dates, cream and sugar in a large, heavy pot. Cook to between a soft and hard ball stage, 233 degrees on a candy thermometer, stirring continuously. When done, stir in the nuts and pour into a greased cookie sheet or 9-by-13-inch baking pan. Cut into squares when partially cooled.

Barbara Rugg got this recipe from her friend Jan Bensel. "It's easy to make and freezes well," Barbara said.

Mix together the pumpkin, sugar and oil, then add the beaten eggs.

Sift together the flour, baking soda, clove, cinnamon and salt and add to the pumpkin mixture. Stir in the chopped walnuts and raisins, if desired. Pour into prepared pans, filling about 2/3 full, and bake for one hour for the large pans, or 25 to 30 minutes for the small pans.

Also called date bars. "This is an easy one," Barbara Rugg said. "I took some to my beautician in Pendleton, and the tears came into her eyes. She said her mother, who is no longer living, had always made these cookies."

Prepare the date filling by mixing the chopped dates with the 1/4 cup sugar and the water in a saucepan. Simmer over low heat, stirring constantly, until thickened. Cool. Preheat oven to 400 degrees

For the crust, mix the shortening and sugar. Stir together the brown sugar, flour, baking soda and salt and add to the shortening mixture. Add the rolled oats and stir until blended. Press half the mixture into a 9-by-13-inch greased baking pan.

Bake for 25 to 30 minutes. Cut into bars and remove from pan while still warm.

Mix thoroughly and store in an airtight container. To make one cup hot cocoa, add 1/4 cup mix to one cup warmed milk.