Pastors stood together on the alter during the lenten services held last week at the Episcopal Church of the Redeemer. Keith Wise, far left, a pastor retired from United Methodist, Sandy Kimbrow, Pastor of the United Methodist, middle, stand beside Ron McCallum, and Rev. Roger A. Harwerth. <BR><I>Staff Photo by Brenna E. Chapman</i> 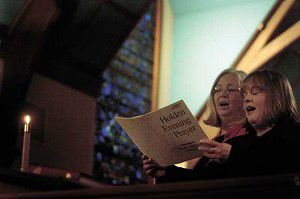 Pastors stood together on the alter during the lenten services held last week at the Episcopal Church of the Redeemer. Keith Wise, far left, a pastor retired from United Methodist, Sandy Kimbrow, Pastor of the United Methodist, middle, stand beside Ron McCallum, and Rev. Roger A. Harwerth. <BR><I>Staff Photo by Brenna E. Chapman</i>

Lent isn't just about giving things up. It's also about taking things on.

Pastor Sandra Kimbrow of Pendleton's First United Methodist Church said in her church, it's mostly about taking on personal responsibilities.

Pastor Frank Moss of the Episcopal Church of the Redeemer said the same for his congregation. And it always has to do with strengthening one's religion or a relationship with God, he added.

Some of the key happenings in Pendleton during Lent are the Lenten lunches at the First United Methodist Church and the evening suppers and services which rotate between the Methodist church, the Episcopal Church of the Redeemer, the First Presbyterian Church and the Peace Lutheran Church.

Many people at the lunch and dinner this week said it's a bit like a yearly reunion, to meet up with people from different churches they may not see on a regular basis.

"Lent is not supposed to be fun, but we all look forward to getting together," said Peace Lutheran member Kay MacKenzie, chuckling.

"It's part of our faith," said Dale Wilkins, who attended the dinner with his wife, Judy. They are members of the united Methodist church. "It's one of the great things we do ecumenically in the community."

Many people attending the service Wednesday night said they enjoy the musical portion, with songs by Marty Haugen, which has been part of the evening service for the past 15 years. Kimbrow said some of the newer pastors once tried to change it to shake things up a bit with the service, but the people wouldn't have it.

"We love the music," said Marj Hoagland, a member of the Presbyterian church. "It's so beautiful. Everybody participates in the singing."

Wednesday marks the fourth week of Lent, a 40-day season to prepare for Easter. It lasts from Ash Wednesday, which fell on Feb. 25 this year, to Good Friday which is April 10. Easter follows on Sunday, April 12. Sundays in Lent are not part of the 40 days.

Lent represents the 40 days Jesus spent in the desert and endured temptations from the devil. He also fasted for the forty days.

Often just before Lent, on Fat Tuesday, people have big dinners or feasts. Betty Udy, a member of the United Methodist church said it was to clean out pantries in preparation for Lent.

Udy is taking part in Lent by volunteering at the lunches at her church and reading a book on the Rules of Benediction. Each day she reads a few rules and contemplates them as part of her religious studies.

MacKenzie, who said she looks forward to Lent, is reading "The Jesus I Never Knew," by Phillip Yancey. She said someone recommended the book and she found it in her church's library.

"It's just a different perspective on Jesus and the culture at that time," she said.

Jim and Juliane Sawyer, also members of the United Methodist Church, said they are taking on a 24-hour fast once a week, usually from noon Sunday to noon Monday.

"It's a good discipline," Jim said. "You tend to lose a little weight."

For Catholics, choosing to give something up is a way to celebrate Lent.

"Lent is more a time of coming back to God," said Vincent Travino, a member of Our Lady of Angels Catholic Church in Hermiston. "That's why we sacrifice, to bring us back to God and keep in focus with him."

Catholics typically fast on Fridays, he said, or eat smaller meals during Lent. They attend the special services on Ash Wednesday and Good Friday. On Ash Wednesday, for example, Our Lady of Angels held four masses, the last two nearly filling the church to its capacity of more than 700.

Catholics give something up, usually something that keeps them away from God.

When he first came to the church, around 12 years ago, Travino said he chose alcohol.

"Now that would be too easy for me," he said with a chuckle.

This year, it's red meat.

"I try to find something in my life that would make me sacrifice," he said. "You don't think about these things until you give them up. ... I'm a hamburger guy, so giving up red meat is hard."

Typically, what a person does for Lent is a private matter, Travino said. Pastors at the Pendleton churches said the same.

"It's supposed to be a sacrifice no one should know," Travino said. "The scripture tells us not to tell."

He told his wife, she wouldn't think he didn't like her cooking. But other times it's more difficult, he said, like if he's at a dinner party and can eat only side dishes.

"It brings us back to who we're serving," Travino said, "not what we're doing."

CDC warns new Covid-19 variants could accelerate spread in US