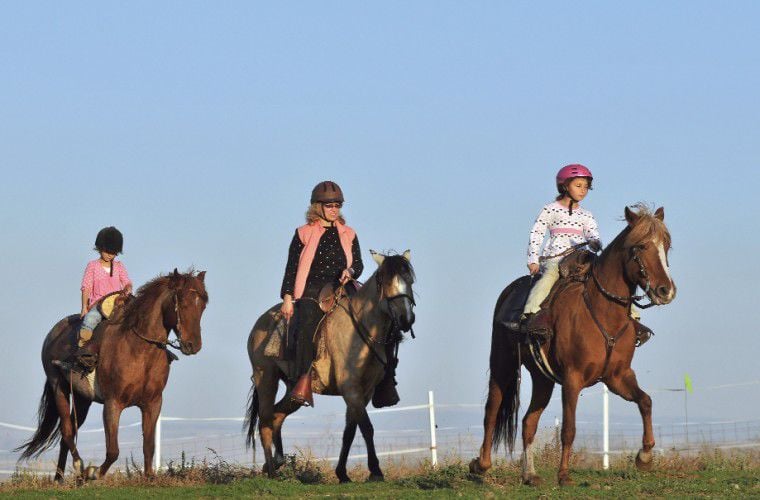 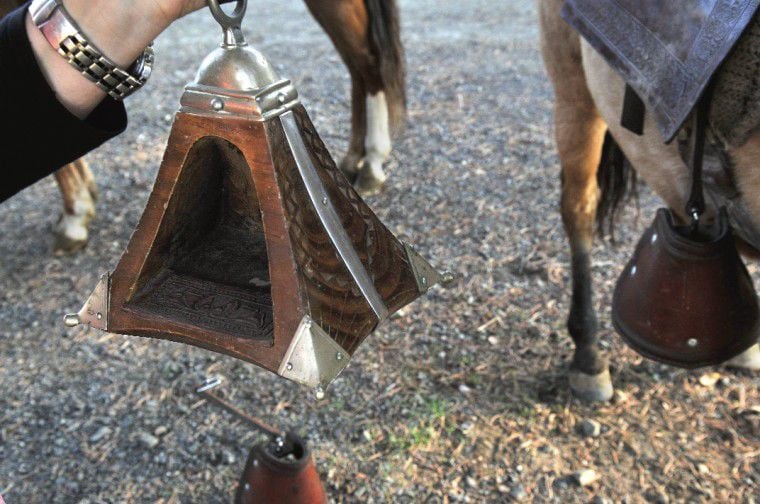 Juliet Markham holds a traditional Peruvian stirrup while saddling horses for riding Wednesday at her ranch outside of Pendleton. 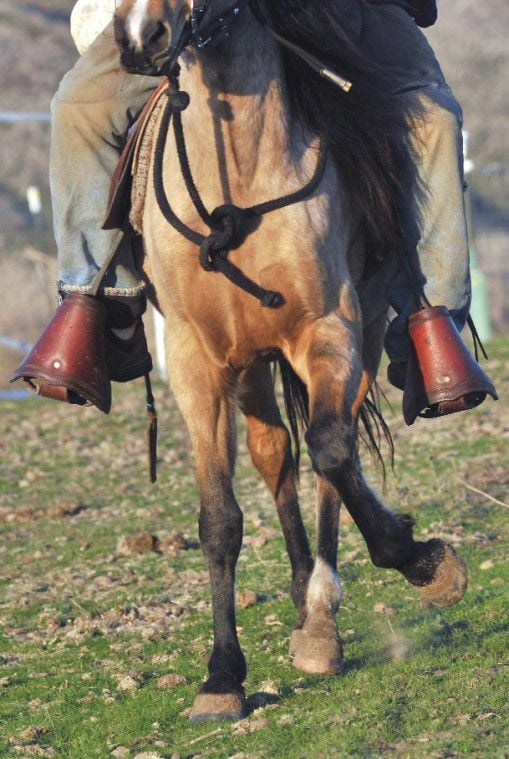 A unique trait of the Peruvian horse gait is called termino — an outward swinging leg action similar to a swimmer’s arm motion during the butterfly stroke. 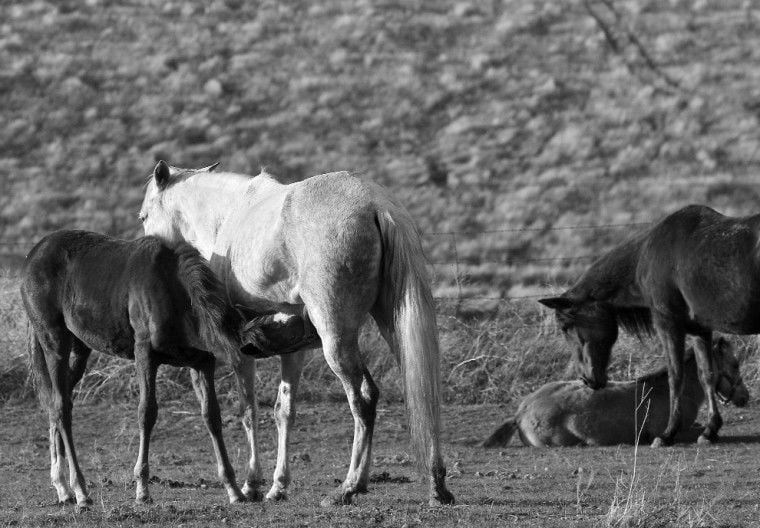 A pair of Peruvian mares tend to their foals on the ranch owned by Cesareo Texidor and Juliet Markham on Thursday outside of Pendleton.

Juliet Markham holds a traditional Peruvian stirrup while saddling horses for riding Wednesday at her ranch outside of Pendleton.

A unique trait of the Peruvian horse gait is called termino — an outward swinging leg action similar to a swimmer’s arm motion during the butterfly stroke.

A pair of Peruvian mares tend to their foals on the ranch owned by Cesareo Texidor and Juliet Markham on Thursday outside of Pendleton.

If you look southwest from the Wildhorse Creek Peruvian Horse Ranch, across gently rolling hills and a deep valley, the lights of Pendleton begin to flicker softly in the distance as the sun fades. The picturesque ranch, outside of Adams on Highway 11, is owned by Juliet Markham and her husband, Cesareo Texidor, and specializes in Peruvian paso llano horses. The horses get their name from their unique four-beat, lateral gait  which makes them the smoothest riding horses available, Texidor said.

These are top of the line horses, he said, with a New?York?City accent still easily recognizeable. We want to be the guys (with Peruvians) in Pendleton. Everyone has quarter horses.

Why the Peruvian paso?

When Texidor and Markham moved to Pendleton with their two young girls five years ago, Markham wanted to start riding horses again.

They were thinking of going with paso finos, a cousin of the paso llano that Texidor was familiar with from his youth, which he first experienced when he traveled from his native Harlem to Puerto Rico for summer vacations.

We tried riding them and didnt really care for how they worked, Markham said. We tried Martino (a paso llano) and another gelding and ended up buying them.?Were real pleased. Theyre very gentle and mannerly on the ground.

And when you get on a paso llano?

Theyre real spirited, she said. It feels like youre on a fire-breathing dragon.

That spirit  called brio  is one of the defining characteristics of a paso llano and one of the qualities that led Markham and Texidor to eventually grow their stable to 11 horses.

Texidor and Markham have Lynn Omohundro to thank for their introduction into the world of Peruvian paso llanos.

Omohundro is the owner of Rafter Z Peruvians, a ranch in Sommerville that sprawls across 400 acres. Although he only started working with paso llanos in 2000, Omohundro has been around horses his entire life.

Before I started riding them Id been beaten up by a variety of things, Omohundro said. (On paso llanos) I could start riding again.

Omohundro said that because the paso llanos are so smooth, they make good horses for children and older riders. And, he said, the joy they can deliver is palpable.

Its call the Peruvian grin, when you ride these horses, he said with a chuckle. Ive never seen anyone be on one for five minutes that didnt get it.

Its that same grin that Texidor and Markham got five years ago. Now, their daughter, Noelle, is a junior reserve champion in Canada, while Texidors reign as the Canadian High?Point novice just ended.

Canadians have wonderful horses in British?Columbia and Alberta,?Texidor said. Its easy for us to go up there for competitions.

Things are busy up at Wildhorse Creek Ranch these days.?Texidor has planted 1,500 malbec grapevines on the property and has plans to plant a grove of marcona almond trees soon.

Another big change will be an indoor arena that should help when 4-H kids come out to the ranch to ride the paso llanos.

The ranch has three horses that it could sell, and just bred two of its mares to Canadian laureado breeding stallions.?The term laureado is used when a stallion wins three major competions, after which it is retired.

One of the stallions is the 2008 Canadian national laureado breeding stallion Coqueton, who Texidor calls the  Brad Pitt of paso llanos. When those babies are born sometime next summer,?Texidor said they will not be for sale. Instead, theyll be the foundation for the ranchs future.

I grew up in the slums of New York City, so this is great,?Texidor said, taking in the stunning view. We dont plan on leaving.

Best movies that have premiered during COVID-19