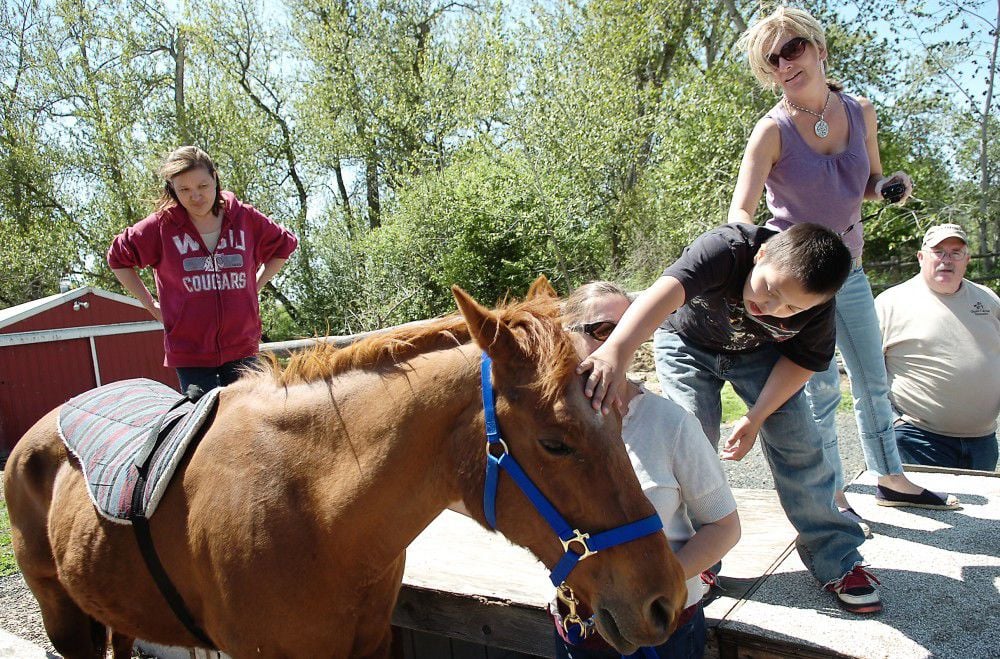 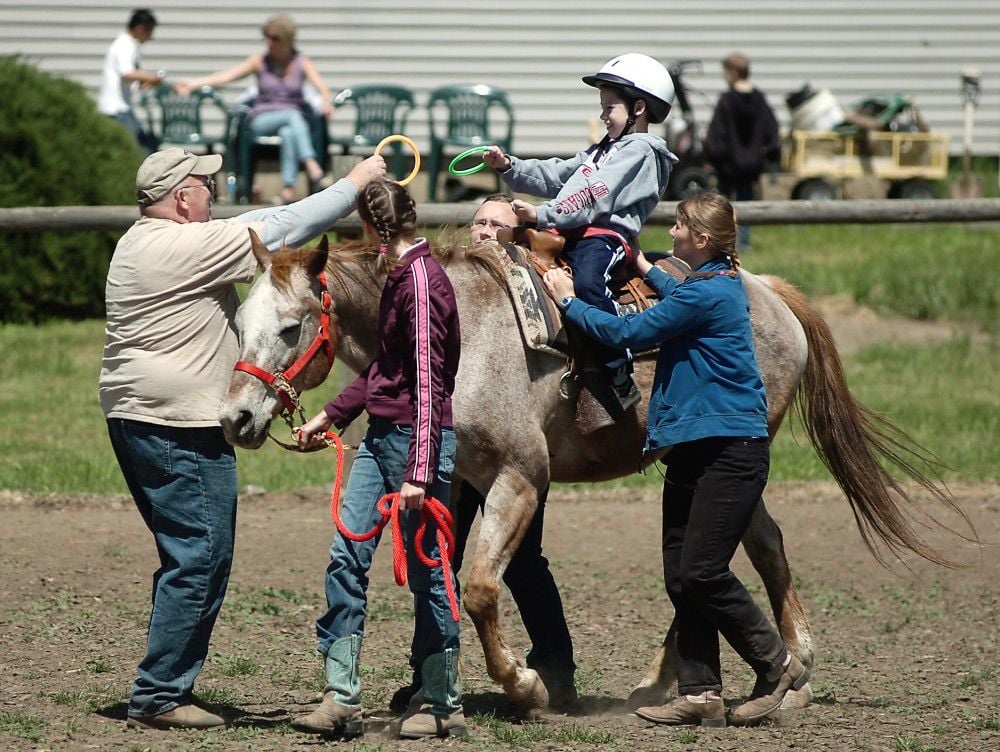 <p>Gary Adams holds out a ring for Wyatt Reed to grab during Reed's therapy session at Dream Catcher Theraputics in Mission.</p> 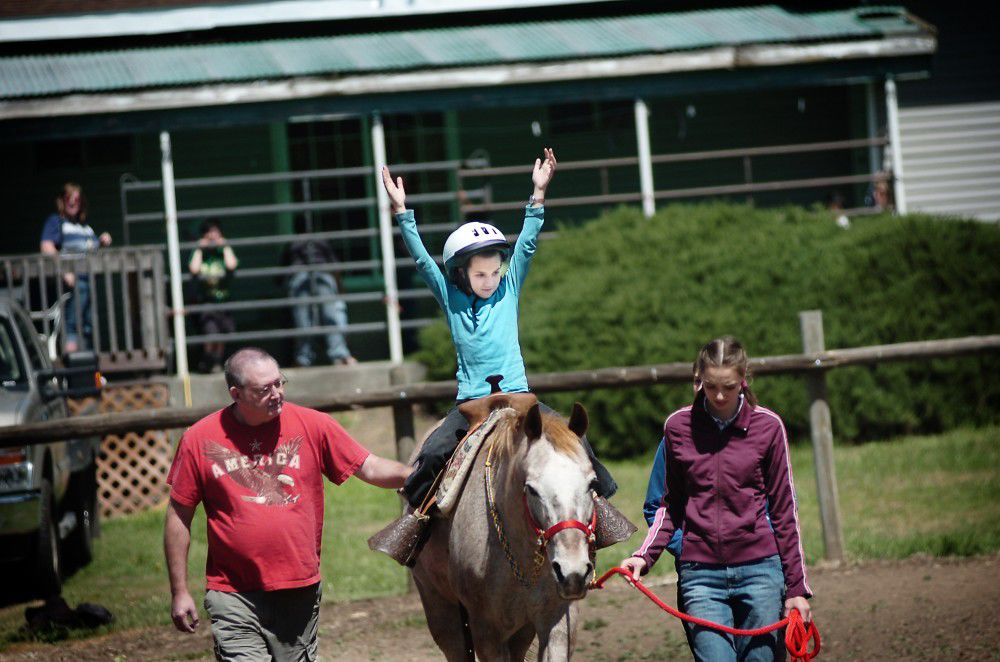 <p>Shania McLean holds up her arms in a confidence building exercise as she rides Wednesday at Dream Catcher Theraputics in Mission.</p> 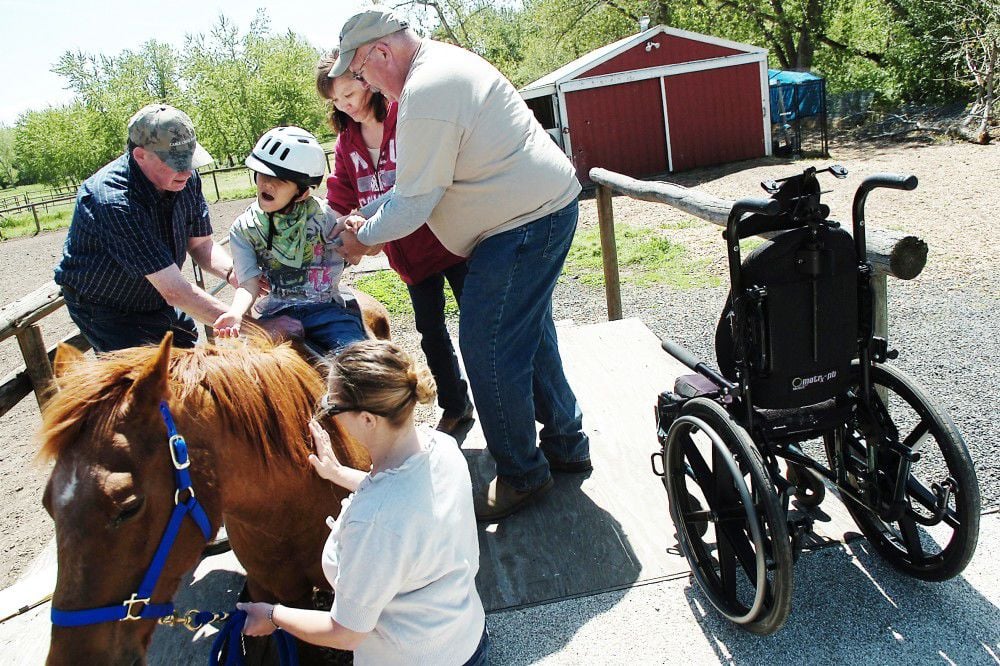 <p>Wacody Pond is helped out of his wheelchair on to Zimmy during a riding session at Dream Catcher Theraputics in Mission.</p> 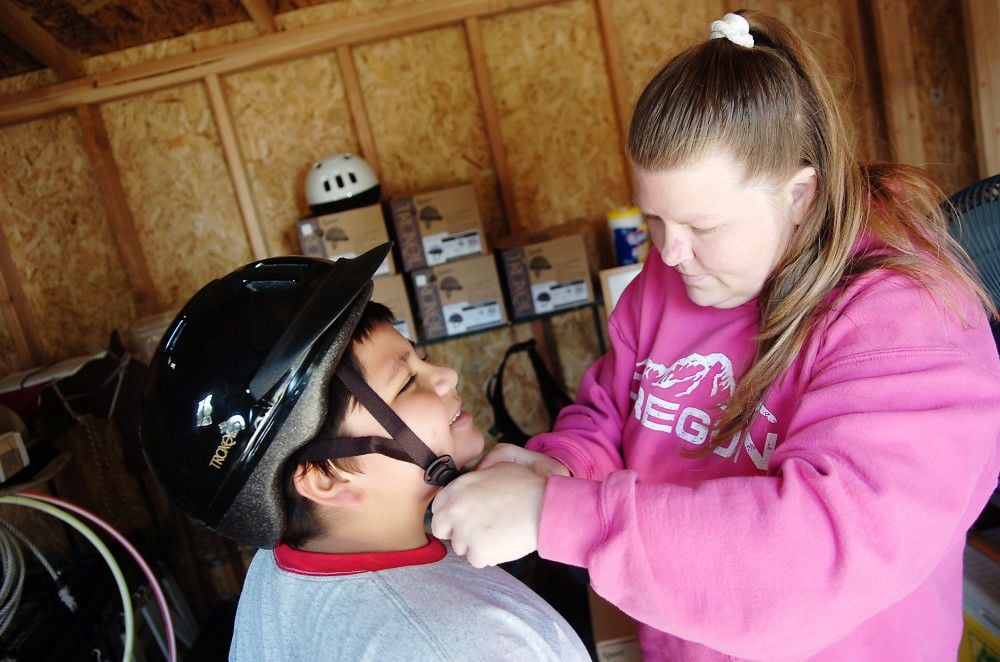 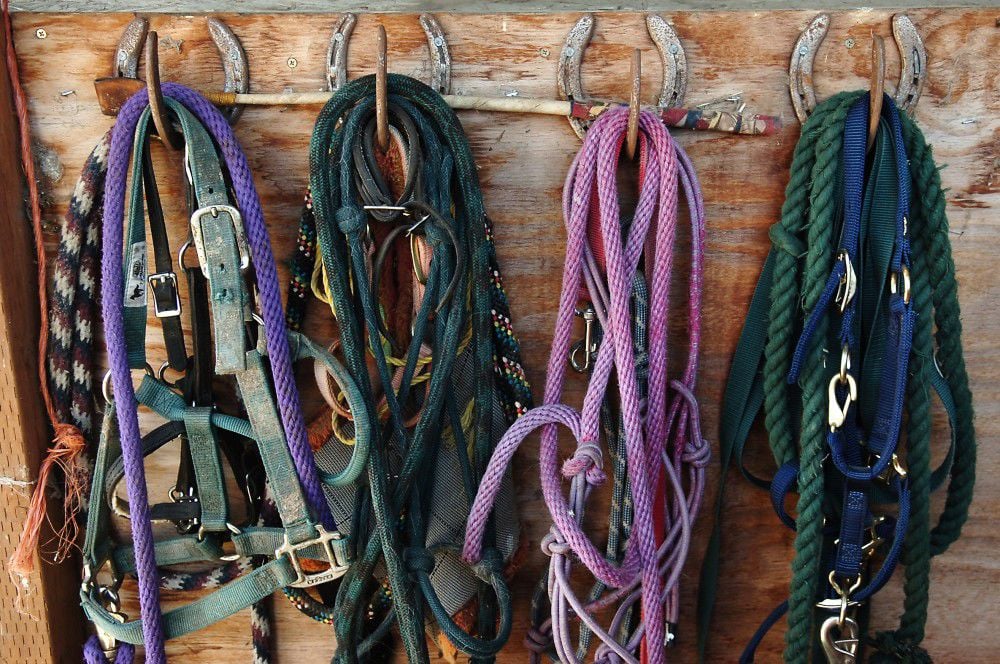 <p>Halters and bridles hang on horseshoe hooks in a barn at DreamCatcher Theraputics in Mission.</p> 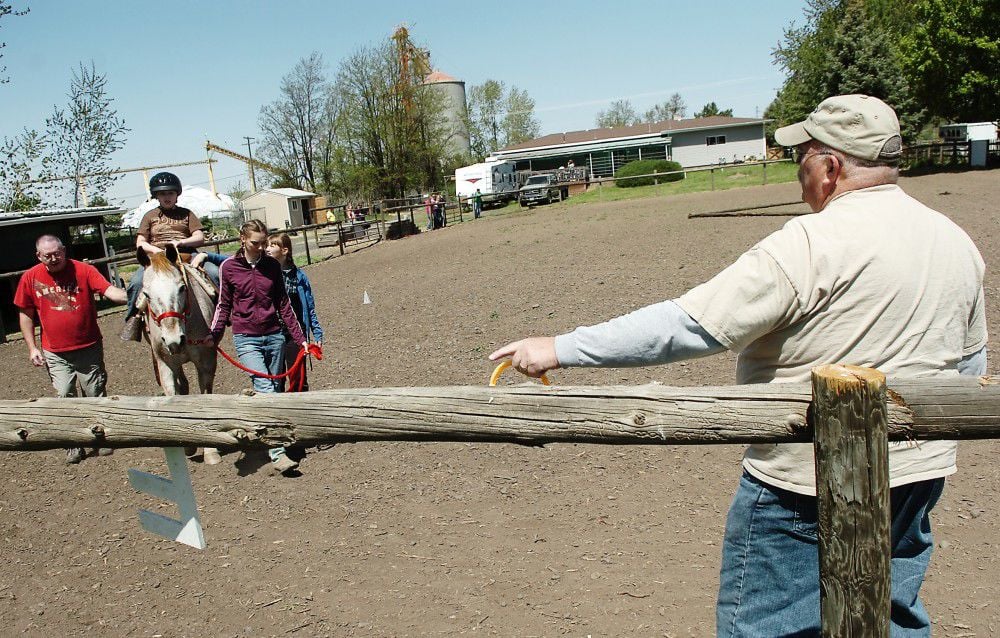 <p>Gary Adams tells Ebin Clark to ride towards the letter "E" during a therapy session at Dream Catcher Theraputics in Mission.</p>

<p>Gary Adams holds out a ring for Wyatt Reed to grab during Reed's therapy session at Dream Catcher Theraputics in Mission.</p>

<p>Shania McLean holds up her arms in a confidence building exercise as she rides Wednesday at Dream Catcher Theraputics in Mission.</p>

<p>Wacody Pond is helped out of his wheelchair on to Zimmy during a riding session at Dream Catcher Theraputics in Mission.</p>

<p>Halters and bridles hang on horseshoe hooks in a barn at DreamCatcher Theraputics in Mission.</p>

<p>Gary Adams tells Ebin Clark to ride towards the letter "E" during a therapy session at Dream Catcher Theraputics in Mission.</p>

Some therapists have four legs and an affinity for oats. Every Wednesday, 14 special needs students from Sherwood Heights Elementary School, Pendleton, experience the healing power of horses. Dream Catcher Therapeutics, 46688 Mission Road, donated 10 free therapeutic riding sessions for each student, all of whom have disabilities such as autism or Down syndrome.

This week, second-grader Wyatt Reed sat confidently in the saddle on a quarter horse named Zimmy. A smiled blazed on his face as two volunteers walked alongside and another led the horse around an outdoor riding arena. It wasnt always so easy. Wyatt had to conquer his fear before finding the joy.

A month ago, on their first visit, Wyatt and most of his classmates eyed the horses with apprehension. Wyatt ventured closer, several yards away, but balked at touching Zimmy or Cisco, a 10-year-old Appaloosa. Two students flatly refused to stray off a porch to even stand near the animals.

The second session, Wyatt reached out his hand and petted a horse. A week later, he screwed up his courage, walked up the wooden stairs on the loading station and climbed aboard. A dazzling smile dawned as he rode.

Gary Adams, who runs the center, watched from the center of the arena. Adams, known by the kids as Grandpa Cowboy, wiped some tears. Some of the volunteers joined in.

The emotions came to the surface, Adams said. He had the biggest smile on his face.

They have made wonderful gains, Terjeson said. I have seen much improvement not only with their communication skills, but also with their coping and independence. Its amazing what wonders horses can teach us.

Each child, she said, has individualized goals for each session. At first, they might only be expected to touch the horse, but the ultimate goal is for them to be able to ride.

Two of the children have yet to make contact with a horse, but inch closer each session.

On Wednesday, fourth-grader Gabe Vigil was challenged to speak clearly.

What do you say to make the horse move, Gabe? asked Grandpa Cowboy.

Heather Travis, the teacher since Terjeson left on maternity leave, checked off Gabes achievement on a chart and rewarded him with glowing praise. Gabes soft blue eyes radiated joy through his glasses as he traveled around the arena, laughing at a miniature donkey in a neighboring pasture that stuck his nose through the rails and brayed.

The high-energy Adams cheerfully pushed the riders toward their limits, instructing them to raise your arms like a jet plane, or hang rubber rings on wooden letters hanging on the rail fence.

Adams and his wife, Rebecca, started the center after noticing improvement in their wheelchair-bound son Lage, now 19, after several therapeutic riding sessions in Hermiston.

At first, he wasnt able to sit up by himself, Adams said. He developed enough muscle tone to sit up in the saddle and helped with coordination and verbal skills. He was more stable and he loved the horse  thats all he talked about.

When the owner decided to move to Seattle, the couple eventually started their own non-profit riding center. Though Adams said he sees breakthrough after breakthrough, he doesnt pretend to know why horses spur such gains.

Its something to do with the calmness of the animals, he said. Theres a bond that develops between them.

Sometimes improvement comes quickly. Adams nodded toward third-grader Wakody Pond, who smiled as volunteers helped him out of his wheelchair. The boys feet misbehaved, getting tangled up and dancing out in all directions. After Wakody rode for 20 minutes, Adams instructed him to walk. Though the boy still needed support, he moved with more control.

The way a horse moves, it mimics the human gait, she said.

Travis isnt sure of the reason for improvement, just knows the children continue to make gains each week. She smiled at third-grader Ebin Clark as he dismounted.

Thank you. Cisco, Ebin told the horse, then turned to high-five his three volunteers.

Adams said he is able to offer the sessions free because of grants from the Wildhorse Foundation, Juan Young Trust and the Good Shepherd Foundation. An Altrusa grant to the school and a Sees Candy fundraiser paid for busing, which costs about $100 each session.

Diane Knutz, of Hermiston, donated Zimmy and Cisco to the center in 2011. Adams encouraged anyone interested in volunteering to call 541-276-2636.