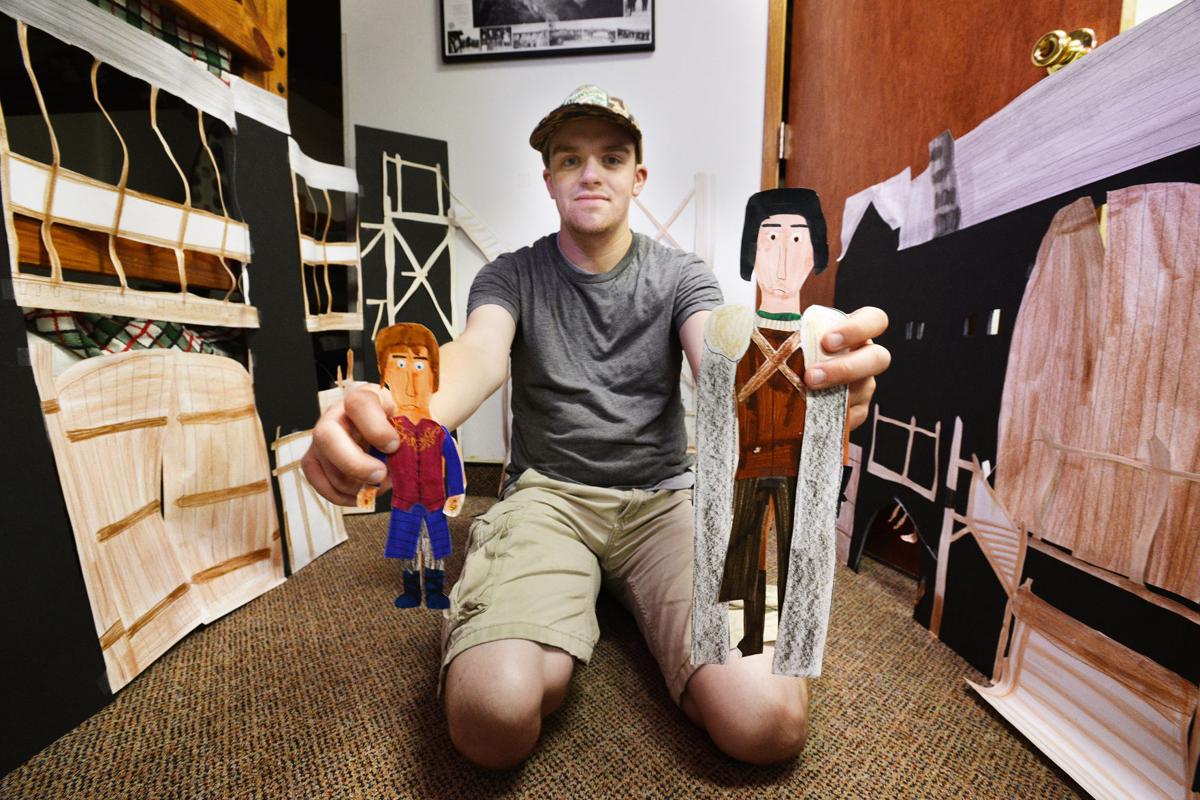 Amateur film maker Nelson Summerfield holds out two of his paper dolls he created in the likeness of Game of Thrones characters Tyrion Lannister and Jon Snow while sitting in his Castle Black set at his home in Pendleton. Summerfield shoots recreations of movies and TV shows with paper dolls and sets of his own design. 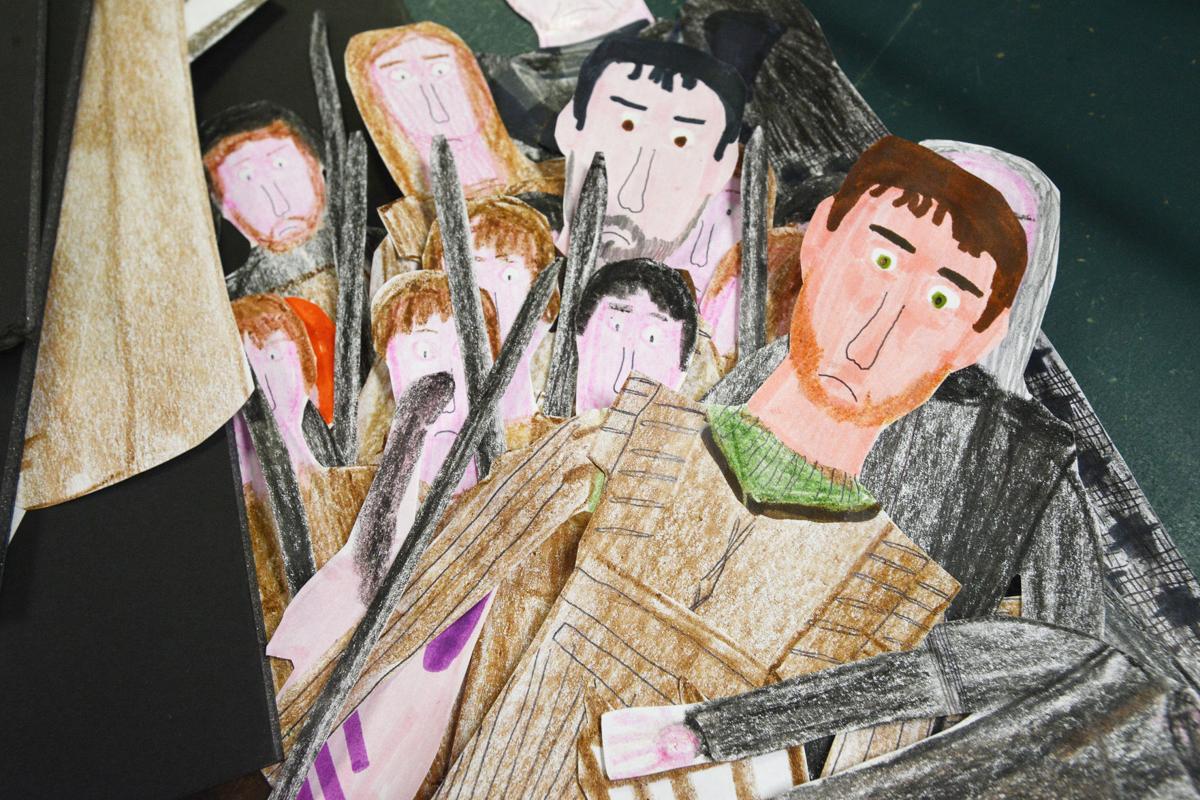 Amateur film maker Nelson Summerfield holds out two of his paper dolls he created in the likeness of Game of Thrones characters Tyrion Lannister and Jon Snow while sitting in his Castle Black set at his home in Pendleton. Summerfield shoots recreations of movies and TV shows with paper dolls and sets of his own design.

While more than 10 million viewers are tuning in each Sunday this summer for the latest episode of the current season of “Game of Thrones,” one Pendleton man is meticulously at work remaking the entire first season. He has no cast of actors, nor a director of photography, nor an editor, nor a key grip; it is a one-man production that functions as a tribute to his favorite pieces of cinema, usually series that revolve around high fantasy or superheros.

Nelson Summerfield recreates entire films in his home using paper dolls as his actors and a camcorder to capture them. Nelson performs the voice acting for every character he films against similar homemade paper sets. Once he has captured all the footage necessary, Nelson edits his video content in Windows Movie Maker, where he will also mix in sound effects and music from the original film soundtrack. Once finished his video is uploaded on his YouTube channel to join his pantheon of remakes. The entire process for each production usually takes between 2-3 months.

Nelson, now 24, has been producing his remakes since he was 15 when he received a Canon camcorder for his birthday. Prior to having video equipment Nelson would reenact his favorite movies with whatever toys he had available. The first movie he fully recreated with a camera was the graphic novel adaptation “300.” Prior to “300” he had made a version of the first installment of the “Lord of the Rings” trilogy though, he hadn’t fully figured out the record function on his camcorder so it was just a dry run.

As with any film production, Nelson’s projects start with a script or, in most cases, transcribing one.

“I usually watch the movie, pause it, and write the script off the subtitles but in the case of something I know so well like ‘Star Wars’ or ‘Lord of The Rings’ they have art books with the scripts so I bought those,” said Summerfield.

Summerfield will take some poetic license with his recreations. In his version of “The Incredible Hulk” he used actors Jennifer Connelly and Sam Elliott reprising their respective roles of Betty Ross and Thunderbolt Ross from the preceding Hulk film by Ang Lee in lieu of Liv Tyler and William Hurt. In the case of “Game of Thrones” he plans to tamp down some of the gratuitous sex and violence that the series is notorious for unless it is absolutely vital to the storyline.

Though innocent and good intentions they may be, some of Summerfield’s remakes run afoul of intellectual property rights. His rendition of “The Empire Strikes Back” was taken down from YouTube presumably due to the original John Williams soundtrack being detected in his video. It is still unclear to Nelson as to why it was taken down in the first place and why it inexplicably resurfaced a year later but he said “it’s back up and I’m not questioning it.”

As of late, Nelson’s unique work has garnered him recognition both locally and beyond. In 2014 the Pendleton Center for the Arts hosted a show of his dolls of characters from the Marvel Universe. The show coincided with a free public screening of his version of “Young Frankenstein” at Prodigal Son Brewery’s theater. Last year he was featured in an interview on Vice Media’s website, exposing his work to a worldwide audience. His version of “The Avengers” was linked through the Vice interview and remains his most viewed piece of material online to date.

“Game of Thrones” is Summerfield’s first attempt at a television series. To him there isn’t much difference between recreating a movie versus a series. The benefit of a working on a series is that he can jump around chronologically and produce episodes out of order.

Although he doesn’t expect the first season of “Game of Thrones” to go up online until this fall, Summerfield is already looking ahead to future projects. The sci-fi horror classic “Alien” is among his top priorities, but even more so a favorite film from his childhood.

“One I’d really want is ‘Willy Wonka and The Chocolate Factory,’” says Summerfield. “As a kid I liked only animated movies but that was one of my few exceptions. I’d want to pay respects to that and of course Gene Wilder.”

James Dean Kindle is the East Oregonian’s entertainment columnist, the executive director of the Oregon East Symphony and a Pendleton musician. Contact him at jamesdeankindle@gmail.com.