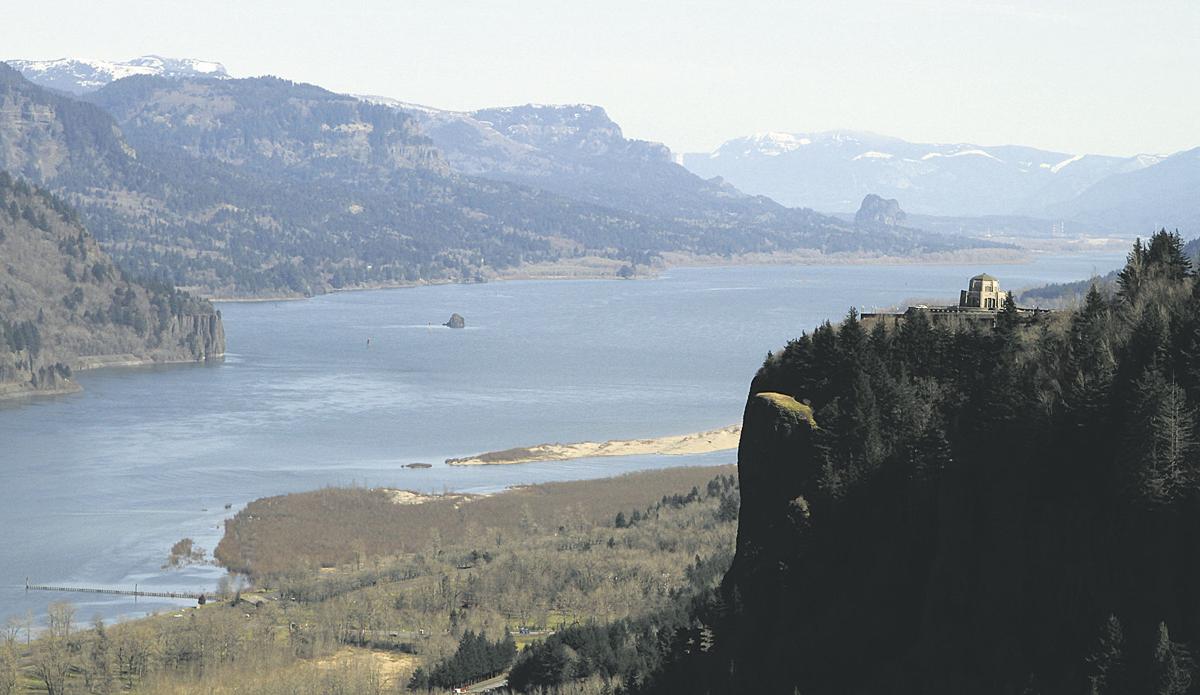 The Columbia River flows past the Vista House atop Crown Point at right near Corbett. Completed in 1918, the structure was meant to offer travelers along the newly built Columbia River Highway a safe spot to park and take in the breathtaking view of the river below. 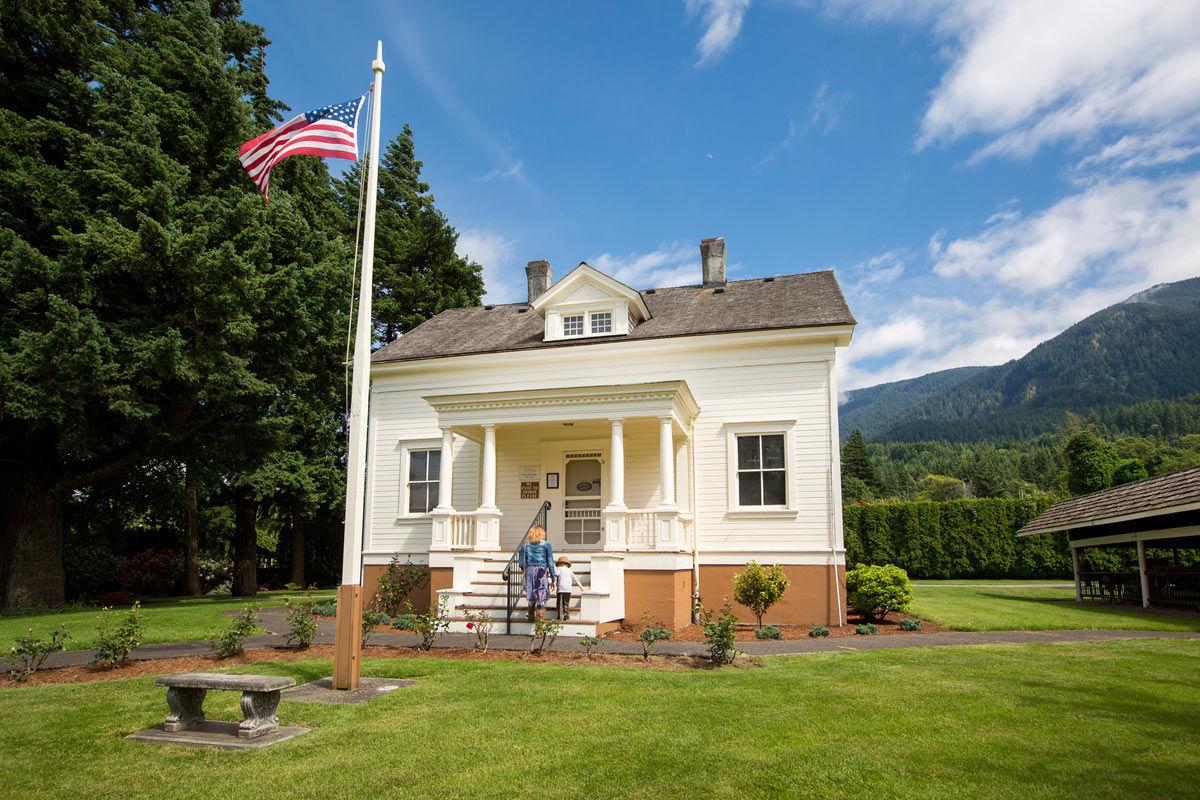 Visitors can tour the Cascade Locks Historical Museum at Cascade Locks’ Marine Park. The first steam engine locomotive in the Pacific Northwest, the Oregon Pony, is on display at the park. 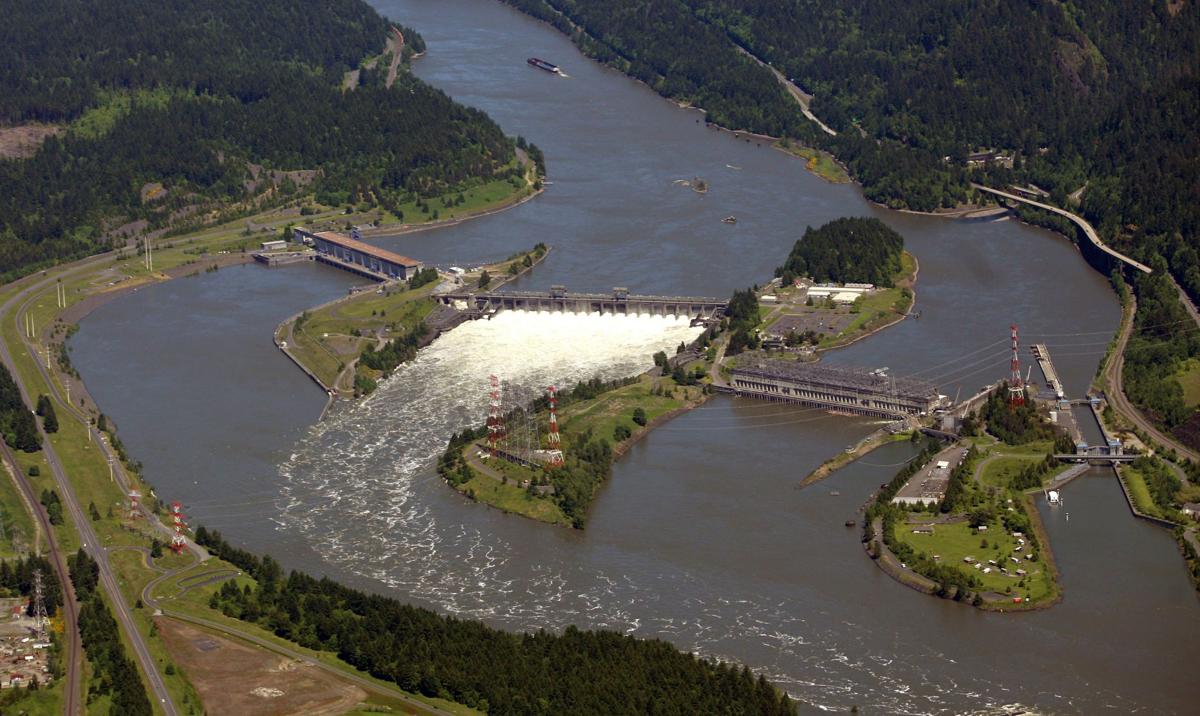 The Columbia River flows past the Vista House atop Crown Point at right near Corbett. Completed in 1918, the structure was meant to offer travelers along the newly built Columbia River Highway a safe spot to park and take in the breathtaking view of the river below.

Visitors can tour the Cascade Locks Historical Museum at Cascade Locks’ Marine Park. The first steam engine locomotive in the Pacific Northwest, the Oregon Pony, is on display at the park.

HOOD RIVER — Listening to Woody Guthrie while driving on a section of the Historic Columbia River Highway, it’s striking to realize his lyrics often praise change and progress.

One of those songs is “Roll on Columbia,” which touts the importance of the Columbia River.

While the song was essentially part of a commercial for the Bonneville Power Association and dam as well as other hydroelectric projects along the Columbia, Guthrie uses his endearing twang to explain the reasons for the lights in the Pacific Northwest: “Your power is turning our darkness to dawn,” he sang.

Harnessing the river in the 1930s changed the course of the future in Oregon and beyond.

The Columbia River Gorge National Scenic Area has recently seen another big change, albeit a tragic one.

The area is recovering from the devastating Eagle Creek Fire of 2017. A young hiker started it by lighting fireworks in the forested area of the Eagle Creek Trail.

The fire burned more than 48,000 acres of lush Douglas fir forests on the Oregon side of the Columbia, causing westbound Interstate 84 to be closed for 10 days. Eastbound lanes were closed for 19. The Union Pacific Railway was halted for three days, and the river itself, a modern major shipping lane, was closed for two days.

Two years later, the area is still scarred from the blaze, and some trails are slowly reopening to the public. The Wahclella Falls Trail in August is the most recent to open.

Even with the charred trees giving contrast to the green of the forest, the Gorge is full of beauty, mesmerizing waterfalls, ample hiking opportunities and historical places.

Crowns of the Gorge

Yes, you can make it to the Columbia River Gorge and back while visiting all these places in a day. It’s a long day, but it’s worth the extra miles on the odometer.

Or pick and choose the various points along the river about two hours from Pendleton.

The Columbia River Gorge is a bit of a dichotomy. The west end is home to the towering hillsides and a jaw-dropping amount of timber lining both sides of the river. The east end is drier, arid, with rolling hills and far fewer people on the trails.

For the sake of simplicity I’ll focus on the more popular western end anchored by Vista House to the west and Hood River to the east.

The picturesque Vista House is perched atop Crown Point overlooking the Columbia River. Completed in 1918, the structure was meant to offer travelers along the newly built Columbia River Highway a safe spot to park and take in the breathtaking view of the river below.

Today, the building is a testament to art deco design and the bygone era of jalopies making the steep climb up the hill.

Run by Friends of Vista House, a volunteer organization, the house is open to visitors during regular hours 9 a.m. to 6 p.m. daily, weather depending. Call or check its Facebook page for details.

For a great view of the building itself, make the short trip west to the Portland Women’s Forum State Scenic Viewpoint.

Staying on the now Historic Columbia River Highway may be considerably slower than taking I-84 east, but it is much more fun.

The highway was hailed as the “King of Roads” when it was fully completed in 1922. It was the first major paved road in the Pacific Northwest, according to the Oregon Encyclopedia.

When the freeway was created in the 1950s, parts of the old highway were abandoned or destroyed in the name of progress. A few sections of the now historical road are open to motor vehicles, with others closed off for pedestrian and bike traffic only. The road still twists through the trees, hugging the hillsides. The current road spans approximately 75 miles.

By opting for this route instead of I-84, drivers can stop at several waterfalls between Vista House and Ainsworth State Park, a few of which are just off the road, including Latourell, Horsetail, Shepperd’s Dell, Bridal Veil, Wahkeena and, of course, Multnomah falls.

Bridal Veil Falls is considerably smaller than its famous neighbor but no less specular. The fall is a double-tiered style fall, cascading over the hillside before hitting a rock shelf and pouring into a pool below. A short trail leads down to the falls and a small viewing deck.

Multnomah is busy, especially on weekends. The U.S. Forest Service website lists it as “the most visited natural recreation site in the Pacific Northwest.” As soon as you see the falls, it really is no wonder as to why.

The 611-foot waterfall plummets 542 feet to the upper falls then again 69 feet at the lower.

At the base of the falls is the equally idyllic Multnomah Falls Lodge. Built in 1925 from rocks found only in the Gorge, it hosts a cafe, restaurant, gift shop and a small interpretive center manned by representatives from the Forest Service.

Lighting the way of change

Traveling along I-84 brings travelers to the Bonneville Dam, the first federal lock and dam on the Columbia and one of the large Pacific Northwest hydroelectric projects in the 1930s.

Construction of the dam was completed in 1938 by the U.S. Army Corps of Engineers with a second powerhouse built in 1981 and a larger lock made in 1993.

Today, Bonneville includes a visitor center, where the public can view the powerhouses and fish ladder and learn more about the dam and the energy that provides power to approximately 900,000 homes.

On Sept. 9, it was reported that there was a crack in the concrete of the dam, causing the Bonneville Power Administration to drain the surrounding water and close the visitor center and recreation areas. The navigation lock reopened at the end of September.

The Bonneville Fish Hatchery, home to Herman the Sturgeon, a 10-foot-long, 500-pound sturgeon over 45 years old, is still open despite the cracked dam, according to the hatchery’s website. The facility opened in 1909. It was remodeled and expanded in 1957 and 1974.

Herman can be best seen at the Sturgeon Viewing Center, a small open-air building with large plexiglass windows that look into the water where Herman and other white sturgeon swim around.

Further upriver lies the town of Cascade Locks and the site of the former treacherous Cascade Rapids that forced the region’s Oregon Trail travelers to use the Barlow Toll Road through the mountains or risk life and property on the river.

In 1864, however, another choice of travel came in the form of the first steam locomotive in the Pacific Northwest, the Oregon Pony.

The small steam engine provided portage around the rapids and along the Columbia from Idaho to Portland.

The engine is on display at Cascade Locks’ Marine Park near the Cascade Locks Historical Museum, housed in an enclosed windowed building, preserving the antique and allowing visitors to catch a peek.

For safer boat travel, passage along the rapids became possible in 1896 when the locks were completed.

Today, the locks are submerged, and the rapids eradicated by the construction of Bonneville Dam downstream.

The concrete retaining walls of the former lock still sit wedged between the Oregon bank and Thunder Island, a small strip of land with trees and grassy picnic and event areas.

This narrow channel of the Columbia is home to the Bridge of the Gods, one of the most iconic bridges spanning the Oregon/Washington border. The modern bridge gets its name from the Native American legend of the land bridge that once straddled the river after a massive landslide sometime between 1425 and 1450 caused tons of debris to slide from the Washington hills and mountains into the river.

The Columbia eventually found its way through the landmass, collapsing the natural bridge and forming the Cascade Rapids in its absence.

Today’s bridge is made of steel and was built in 1926. It is a part of the Pacific Crest Trail and the only bridge for 86 miles that allows for pedestrian crossing.

At Cascade Locks there are still a handful of Native American fishing platforms in the old lock way and along the shoreline, though nowhere near as many as before the dams were constructed. This is also one of the few locations where you can purchase fresh Native-caught salmon and sturgeon.

Traveling further east on I-84 lends oneself to views of the lofty and towering cliffs carved out by the choppy waters of the Columbia River.

The river, however, was not alone in carving out the basalt cliffs and mountains on both sides of the river. Between 18,000 and 15,000 years ago, during the last ice age, the massive Missoula Floods raced down this river canyon, etching out the land.

These floods occurred several times every couple hundred years when Glacial Lake Missoula, located in Western Montana, would periodically drain when its ice dam would fail, sending millions of cubic feet of water per second coursing over Eastern Washington, scouring the banks of the Columbia River Gorge and the Willamette Valley before entering the Pacific Ocean. It is because of these floods that we have the impressive number of waterfalls throughout the Gorge and, in part, why the soil in the Hood River Valley area is so prime for orchards and grapes.

At the base of Mount Hood, and 20 miles east of Cascade Locks, the quaint town of Hood River boasts its Fruit Loop, a map of 28 orchards, farm stands, vineyards and fruit companies that loop around the town. A few of these orchards offer U-pick opportunities, depending on what’s in season.

Walking through one of these harvest-your-own farms armed with a galvanized bucket feels like a world frozen in time with families and couples dispersed among the Galas, Honeycrisp, Golden Supremes and Tokyo Rose apple trees that line the long avenues.

Through the wind and the incoming rain of early September, it was again a feeling of that bygone era when picking fruit directly from a tree or stopping in a country store for a fresh-made pie, preserves and apple dumplings — that era of change brought about by an influx of settlement, technological advancement and the drive to explore the pristine and drastic beauty of the Columbia River Gorge.

Transported to a different time along the Columbia with Woody Guthrie’s words crackling over Spotify: “These mighty men labored by day and by night, matching their strength ’gainst the river’s wild flight, through rapids and falls, they won the hard fight. So roll on, Columbia, roll on.”

Movie sequels that were better than the original

Vaccinations for some first responders to stop due to low supply