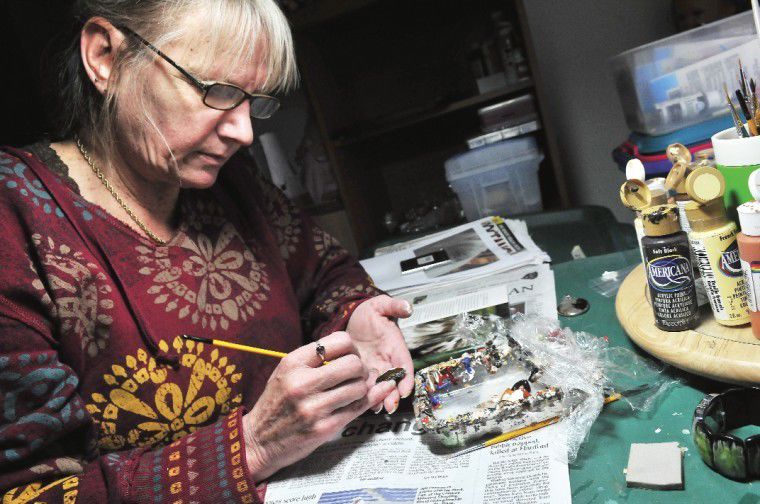 Teresa Long paints a portrait of a dog onto a piece of jewelry that she will sell on eBay at her home studio in Hermiston. Dog lovers from all over the world have commisioned Long to paint pooches on items ranging for jewelry to handbags. 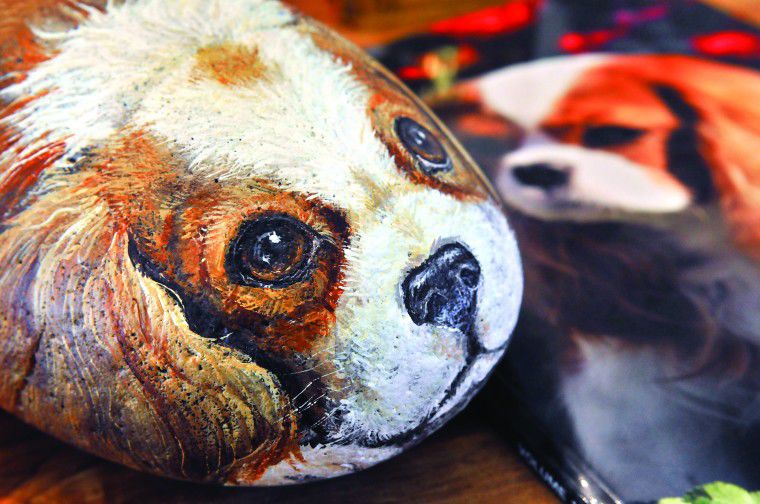 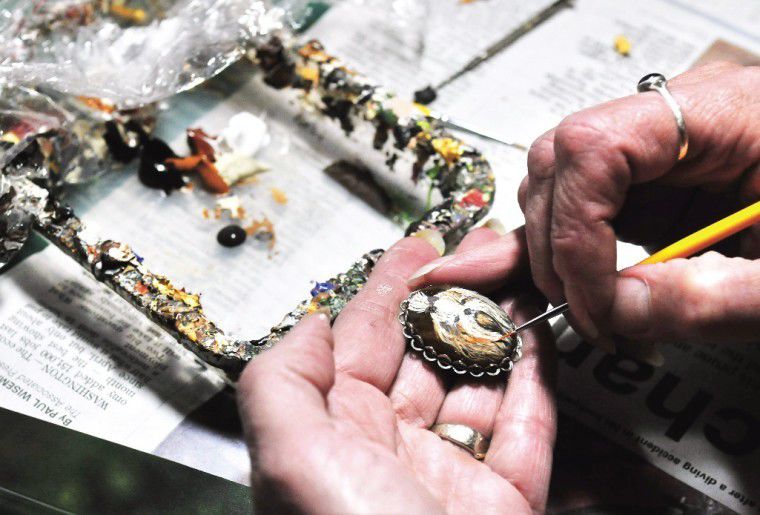 Teresa Long of Hermiston paints some details on a piece of jewelry she is working on Monday at her home in Hermiston. 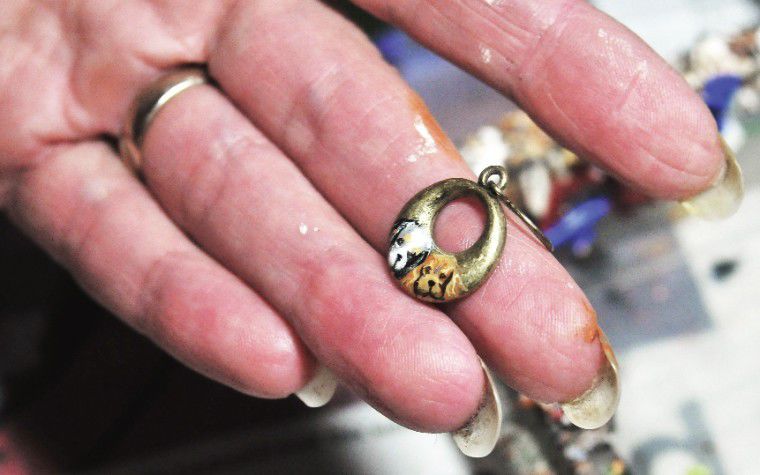 Teresa Long holds one of her smaller pieces.

Teresa Long paints a portrait of a dog onto a piece of jewelry that she will sell on eBay at her home studio in Hermiston. Dog lovers from all over the world have commisioned Long to paint pooches on items ranging for jewelry to handbags.

Teresa Long of Hermiston paints some details on a piece of jewelry she is working on Monday at her home in Hermiston.

Teresa Long holds one of her smaller pieces.

With tiny brushes and a rock-steady hand, Hermiston resident Teresa Long has made a career of painting mans best friend.

A retired hairdresser, Long has always been creative, even when a single mom of three girls. She used to make crafts for Christmas bazaars, but her hobbies were always just that  a fun way to spend time.

I actually thought I would die behind the chair, said Long, a stylist for 28 years. I never dreamed of doing something like this.

But now Long sells her painted items on eBay, specializing in upscale dog breeds such as the Cavalier King Charles and Russian Wolfhound (Borzoi). Her hand-painted trophies have appeared at the National Dog Show in Philadelphia, the Westminster Kennel Club Dog Show in New York City and the Scruffts dog show in the United Kingdom.

Breeders from all over the world commission Long to paint jewelry, purses, knick -knacks, even furniture. Some fans collect her Christmas ornaments every year. The quarterly Royal Spaniels recently offered a leather photo album, decorated with three doe-eyed puppies, as a contest trophy.

Anything paintable, I paint on it, Long said.

Long didnt suddenly wake up one day and start painting spaniels for cash. She began with rocks, an idea she picked up from a book. But after painting her first rock, a resting baby deer, she threw the book away and started doing her own thing.?Her rock animals grew smaller. She sewed them tiny beds, named them and made each a certificate of rock pedigree.

Long sold them out of her home and at bazaars, where they flew off her table. She listed a few on eBay and the results, she said, surprised her.

I just kind of fell into it, she said. It just took off.

Luckily, Longs new career happened at the right time. She was ready to stop doing hair, she said, and her family needed her at home. She can now work and care for her 94-year-old mother, Margaret Thorpe, and her 2-year-old granddaughter, Natelie. Things happen for a reason, she said.

Im really fortunate that Ive been able to make money with something I like doing, she said. and you get to meet so many neat people.

Long has been in business for about six years and sold at least 7,000 items  shes lost track of exactly how many. Shes perfected her technique for several breeds and improved her methods. At first, for example, she bought leather purses to paint. Now, clients send purses, or other items, with pictures of their pets. One California woman sends jewelry on a regular basis.

Long has also learned to say no.

I have to be careful when I take orders, because they would swamp me, she said.

Long knows what the money makers are, but shes always on the lookout for new ideas. She recently printed an art shot of a horse  a closeup of its eye  off the internet as a project idea.

I have to recharge myself by doing something different and a little bit off-the-wall, she said.

From Wuhan to the White House: A timeline of COVID-19’s spread

'This is like my new job': Inside the struggle to get a Covid-19 vaccine