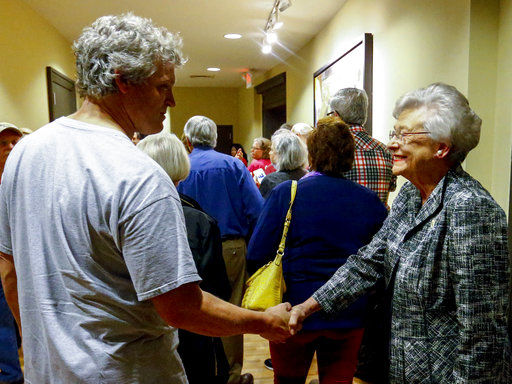 Alabama Governor Kay Ivey shakes hands with other voters as she waits in line to cast her vote at Huntingdon College Tuesday, Nov. 6, 2018, in Montgomery, Ala. (AP Photo/Butch Dill) 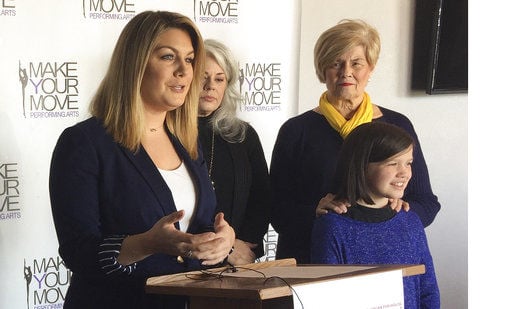 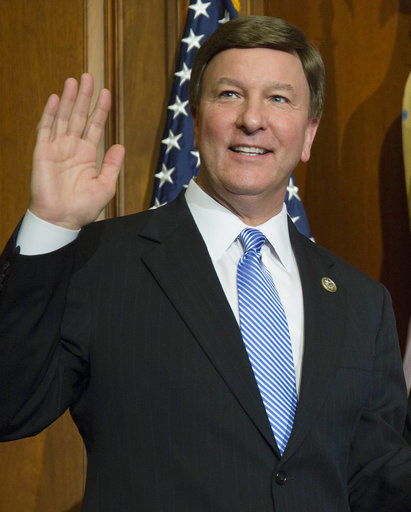 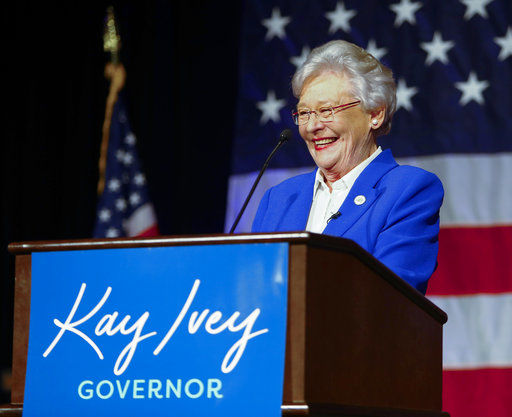 FILE - In this June 5, 2018, file photo, Alabama Gov. Kay Ivey speaks to supporters at her watch party after winning the Republican nomination for governor at a hotel in Montgomery, Ala. Ivey, who took office after the state’s former governor resigned amid a sex scandal, is trying to win her first full term against 45-year-old Walt Maddox, the Democratic mayor of Tuscaloosa. (AP Photo/Butch Dill, File) 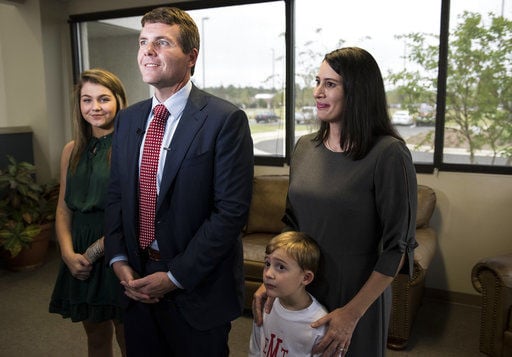 Alabama Governor Kay Ivey shakes hands with other voters as she waits in line to cast her vote at Huntingdon College Tuesday, Nov. 6, 2018, in Montgomery, Ala. (AP Photo/Butch Dill)

FILE - In this June 5, 2018, file photo, Alabama Gov. Kay Ivey speaks to supporters at her watch party after winning the Republican nomination for governor at a hotel in Montgomery, Ala. Ivey, who took office after the state’s former governor resigned amid a sex scandal, is trying to win her first full term against 45-year-old Walt Maddox, the Democratic mayor of Tuscaloosa. (AP Photo/Butch Dill, File)

BIRMINGHAM, Ala. (AP)  The Latest on Election Day in Alabama (all times local):

Brooks defeated Democratic challenger Peter Joffrion by casting himself as a firm conservative who supports President Donald Trump. Brooks touted the strong economy and shoring up the border, and he portrayed Democrats as a socialist threat to the nation.

Joffrion is a former city attorney in Huntsville. He hoped to gain support partly through the Democratic Party's larger-than-usual slate of candidates in Alabama, and he talked up issues including health care and a living wage for workers.

Joffrion raised more money than Brooks' three previous challengers, but the Republican still outdistanced the challenger in both fundraising and campaign spending.

Ivey took over as governor 19 months ago when her predecessor, Robert Bentley, resigned in the fallout of an alleged relationship with a top aide.

In her bid for office, Ivey emphasized the state's record low unemployment rate and strong economy and campaigned on establishing a state lottery to fund education.

Ivey was criticized during the campaign for refusing to debate Maddox or her GOP primary challengers.

Republican incumbent Robert Aderholt of Haleyville has won a 12th term in Congress representing the 4th District of north Alabama.

Aderholt turned back a challenge from Democrat Lee Auman, a camp manager from Union Grove.

The 53-year-old Aderholt tied himself closely to President Donald Trump, advocating for White House proposals including the construction of a wall along the U.S.-Mexico border. He's a member of the powerful Appropriations Committee and chairs a subcommittee on agriculture.

Auman is 25 and was making his first run for public office. He campaigned on addressing the opioid crisis, reducing health care costs, improving education, supporting unions, and other issues.

Auman's campaign website says he managed an Episcopal church camp in rural north Alabama before leaving to run for Congress.

Palmer was elected in his first run for political office in 2014 after running a conservative advocacy organization, the Alabama Policy Institute, for more than two decades. He advocated increasing religious freedom, decreasing environmental regulation, and working with President Donald Trump to strengthen the military.

Kline is the founder of Free The Hops, an organization that paved the way for the state's growing craft beer industry by advocating for legislators to revise Prohibition-era laws.

Rogers turned back a challenge by Hagan for the District 3 seat on Tuesday in what was the most closely watched of Alabama's congressional races.

The 60-year-old incumbent from Saks campaigned on maintaining a healthy economy and reducing federal regulations, two themes that resonate with conservative voters who back President Donald Trump. He also talked about supporting the military, tax cuts and replacing the health care law signed by former President Barack Obama.

The 29-year-old Hagan is from Opelika and was crowned Miss America in 2013. She advocated improvements to programs including education, and she charged that Rogers had lost touch with voters.

Polls are open in Alabama despite overnight storms that forced some schools and offices to push back their start times.

With only scattered damage and power outages reported statewide, weather forecasters say conditions should improve for voters to be out during the day Tuesday.

Polls are open from 7 a.m. until 7 p.m. statewide, and some polling places had voters in line when they opened.

Secretary of State John Merrill says precincts are supposed to open on time even if located in schools where officials delayed classes Tuesday because of the weather.

Republicans have a clear edge in the midterm elections in deeply conservative Alabama, from the governor's office on down. The question is whether Democrats can translate newfound energy into even one win in a statewide or congressional race.

But starting with the race between GOP Gov. Kay Ivey and Democratic challenger Walt Maddox, state Democrats are more optimistic than in recent years, partly because they managed to elect Doug Jones as U.S. Senator last year. Opposition to President Donald Trump  who is hugely popular among Alabama Republicans  helped bring out new Democratic candidates.

Here are some of the top races and issues to watch in Alabama on Election Day:

The race to be Alabama's attorney general features an odd dynamic  the challenger may have better name recognition than the incumbent.

Republican Attorney General Steve Marshall, an appointee who previously served as a county prosecutor in north Alabama, is being opposed by Democrat Joseph Siegelman, the son one of the best-known names in state politics, former Gov. Don Siegelman.

Marshall, 53, took over in February 2017 after Luther Strange was appointed to the U.S. Senate. He endured personal tragedy earlier this year when his wife Bridgette took her own life in June just weeks before the Republican runoff.

Siegelman, 30, is a Birmingham attorney who was making his first bid for public office. While many voters might recognize his name because of his father, they also might attach some unwanted baggage to it. Don Siegelman, Alabama's last Democratic governor, served time in federal prison after being convicted in a bribery conspiracy.

Alabama hasn't even had a lieutenant governor since April 2017, when Kay Ivey was elevated from the position to become governor following Robert Bentley's resignation. That's about to change.

Republican state Rep. Will Ainsworth and Democrat Will Boyd are vying to become lieutenant governor. The main job of the office is to preside over the state Senate.

Ainsworth was first elected to the Alabama House four years ago. The North Alabama resident billed himself as Christian conservative who will set a higher ethical standard at a Statehouse tainted by repeated scandals in recent years.

Boyd is a minister from Florence. He has made several unsuccessful bids for public office, including last year when he sought the Democratic nomination for the seat now held by Jones.

Six contested congressional seats are on the ballot, highlighted by the race for the District 3 office that represents much of eastern Alabama.

Republican Rep. Mike Rogers of Saks is being challenged by Democrat and former Miss America Mallory Hagan of Opelika as he seeks a ninth term in the solidly GOP district.

While Hagan has portrayed Rogers as being out of touch with voters after years in Washington, Rogers has cast himself as a solid conservative who supports the president on issues including border security and strengthening the military.

In other races, GOP Rep. Bradley Byrne of Fairhope is opposed by Democrat Robert Kennedy Jr. of Mobile in District 1, and Republican Rep. Martha Roby of Montgomery is being challenged by Democrat Tabitha Isner in District 2 of southeastern Alabama.

The ballot includes two contested races for Alabama Supreme Court, including the top position on the nine-member panel.

Parker was elected to the Supreme Court in 2004. His campaign appealed to social conservatives and emphasized his hope of one day overturning U.S. Supreme Court decisions such as the one that legalized abortion.

In the other Supreme Court race, Birmingham attorney Jay Mitchell and Jasper attorney Donna Wesson Smalley are both seeking the Place 4 position on the state's highest court.

Constitutional amendments about the hot-button topics of abortion and religion could help drive turnout on Tuesday.

Voters will decide whether to add anti-abortion language to Alabama's 1901 constitution specifying that the state recognizes the "rights of unborn children." The measure does not impact abortion access unless Roe v. Wade, the U.S. Supreme Court decision that legalized abortion, is reversed.

The statewide ballot also includes a constitutional amendment regarding the display of the Ten Commandments in public schools and government buildings. The proposal would allow for the display the Old Testament laws in a way that "complies with constitutional requirements" such as being intermingled with historical documents.

Both issues could help bring GOP voters to the polls given the numbers of Christian conservatives who vote Republican in the state.

For AP's complete coverage of the U.S. midterm elections: http://apne.ws/APPolitics

Experts warn of Covid-19 risks ahead of holiday weekend