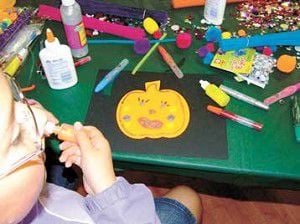 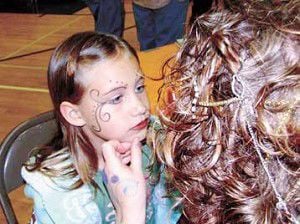 Photo contributed by Marilynn Colcord<br> A child sits for some elaborate face painting during Harris Junior Academy's Fall Festival last Saturday evening. The annual fundraiser brought in about $1,100 for cafeteria tables and tools in the school's new industrial arts building.

Photo contributed by Marilynn Colcord<br> A child sits for some elaborate face painting during Harris Junior Academy's Fall Festival last Saturday evening. The annual fundraiser brought in about $1,100 for cafeteria tables and tools in the school's new industrial arts building.

Harris Junior Academy in Pendleton brought in a little more than $1,100 during its 2008 Fall Festival last Saturday evening. The Harris Junior Academy Home & School Committee sponsored the event and will use the money for cafeteria tables and tools for the new industrial arts building.

The festival featured games and entertainment on an affordable scale. Adults as well as children found themselves taken to jail for such offenses as smiling at someone, laughing too loudly and having a good time. Luckily, several people were able to make bail using game tickets, committee leader Marilynn Colcord said.

Along with the jail, children this year were able to race goldfish. Colcord said the new event proved to be a huge success, and participants even got to take home goldfish at the end of the evening.

Volunteers handed out stuffed frogs of all manner to anyone able to throw a plastic frog onto the lily pad, and the highlight of the evening was a Thomas the Train Bouncy House for those about 4 years old and younger.

And a costume contest yielded first place winners in three divisions, and father-son team, Mark and Adam Colcord, gave the best time in the log sawing contest at 25 seconds.

"All in all, the Festival was a smashing success," Colcord said, adding a "thank you" to the festival's volunteers and attendees.