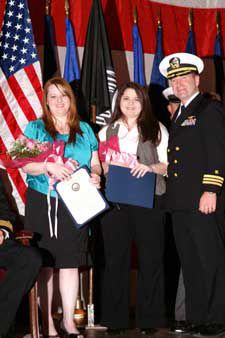 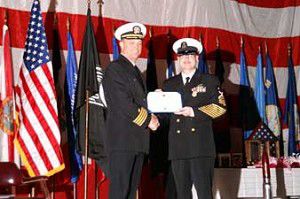 On Friday, February 6, the VFA-137 Kestrels, of Naval Air Station (NAS) Lemoore, paid homage to their former Maintenance Master Chief Petty Officer, Aviation Structural Mechanic Master Chief (Structures)(AW)Sean P. Degan, of Pendleton, Oregon, and his family with a retirement ceremony that focused on the sacrifice he and his family made during an illustrious career. Master Chief Degan could honestly say he was once among the group of Sailors undecided on a career in the Navy, but then again, he joined up over 29 years ago.

Sacrifice was definitely the theme of Master Chief Degan's day of reflection and rejoicing. He enlisted in the Navy as an Airman Recruit in 1979. As one would expect, he made numerous transfers, but the Degan pace could buckle the most ardent travel enthusiast. He made a total of seven coast-to-coast moves. In that respect, Master Chief Degan was always on the Navy's cutting edge, participating in and overseeing relocations, platform transitions, and the outright creation of multiple squadrons. In measuring the sum of Master Chief Degan's accomplishments one would be hard pressed to find a more exemplary Navy sailor.

The many present had the honor to reflect on Master Chief Degan's career, but Commander, Carrier Air Wing TWO (CVW-2) Captain Alton Ross brought that reflection to life. Captain Ross served as the guest speaker at the retirement ceremony and emphasized what a career like Master Chief Degan's actually represented. "Master Chief Degan has accomplished things and ascended to a level that leaves us in awe," commented Captain Ross, "and we are truly going to miss his dedication." Captain Ross presented Master Chief Degan with a Meritorious Service Medal for his most recent successes on a seven and a half month combat deployment, and in recognition of nearly 30 years of service to his country.

Master Chief Degan thanked Captain Ross for his kind words, but wanted to reserve his deepest appreciation for those that commonly go unrecognized. Master Chief Degan made sure his loved ones were not overlooked, bringing his wife Theressa Degan and daughters Rosanna Brown and Nikki Degan on stage. Master Chief Degan wanted to ensure any acknowledgement he received paled in comparison to that given to those three women who remained his constant in a career of fluctuation.

Master Chief Degan's career was defined through new beginnings and closings, challenges and triumphs, and overall by unquestionably stellar service on shore and at sea. It is fitting that the ceremony concluded with the career Sailor ceremoniously "going ashore." In keeping with tradition, Master Chief Degan requested to go ashore for the last time and was granted permission by Kestrel's Commanding Officer, Commander David Kindley. Master Chief Degan then walked through the "Sideboys" procession, manned by Kestrel Senior Chiefs and Chiefs, as the boatswain's pipe blew. The Kestrels seemed to expect this would be the last time they saw their Master Chief go ashore, but in driving home his point of who deserved the real honor, he returned to escort Theressa down the same line. In the end, the day turned out to be as much for Master Chief Degan as for Theressa, Rosanna, and Nikki, just how the model sailor wanted it.