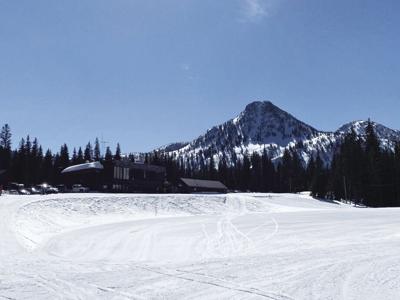 NORTH POWDER — With skiers and snowboarders carving turns in fresh powder, feathery white clouds glittering in their wake, it was almost possible to forget there’s a pandemic going on.

But though symbols of the viral scourge were evident this season at Anthony Lakes Mountain Resort, the ski area bucked trends that affected other types of businesses by welcoming more visitors than the previous year, rather than fewer, said Anthony Lakes Marketing Director Chelsea Judy.

She didn’t have specific numbers.

“We went into it without any expectations, but I would say it was definitely a successful season,” Judy said on Wednesday, March 31. “People were grateful to be able to ski through a pandemic.”

The ski area in the Elkhorn Mountains, about 19 miles west of North Powder, concluded a most unusual season on Sunday, April 4.

Among the more notable differences this winter is that the ski area’s lodge, except restrooms, was closed.

Visitors were still able to buy burgers and other food and beverages, and the “ski-thru” window proved popular, Judy said.

Food and beverages were also available on weekends from Creston’s Yurt at the top of the chairlift.

Kcia Fletcher of Baker City, who skied about once a week this season at Anthony Lakes with her husband, Neil, and their sons, Ethan, Dawson and Oliver, said the ski area did “a great job” with outdoor seating.

Another change prompted by the pandemic is that skiers and boarders weren’t required to ride in trios on the chairlift.

Although relatives and friends could ride together if they chose, Judy said most often there were two people per chair, and in some cases only one as a skier or boarder chose to ride alone.

This inevitably led to longer lines, and longer waits, at the bottom of the mountain than are typical for Anthony Lakes, Judy said.

Still and all, she estimated the average wait was from 7-10 minutes, with around 15 minutes on busier days.

Fletcher said the lines were noticeable — but largely because waiting to get on the chairlift has previously been a rarity.

“We’ve been really spoiled at Anthony Lakes,” she said. “It wasn’t that bad.”

Fletcher said lines were longer on weekends and on Thursdays following a heavy snowfall, when conditions were optimal.

She said “nearly everyone” complied with the requirement, and that many appreciated the resort’s effort to reduce the risk of spreading COVID-19.

In any case, face coverings are often a welcome accessory at 8,000 feet during winter.

“So many people do ski with a face covering as it is,” Judy said.

But none of the changes provoked by the pandemic seemed to significantly curb visitors’ enthusiasm to get out in the cold, clean air, she said.

“People just want to get outside and do what they love to do,” Judy said.

In preparing last summer and fall for what was clearly going to be an unusual season, Anthony Lakes staff anticipated the potential to need to limit daily visitor numbers to ensure social distancing.

But that concept was based on the idea that the lodge would be open, albeit with limited occupancy.

But in November, just before the resort opened thanks to a series of early snowstorms, Oregon Gov. Kate Brown, in response to a rising number of COVID-19 cases statewide, imposed more stringent restrictions on restaurants, including the lodge.

General manager Peter Johnson announced that the lodge would be closed, except for restrooms. The lodge is in Union County, where indoor dining was either prohibited, or limited to 25% of capacity, for much of the ski season.

Social distancing is obviously much easier on the slopes than in the confined space of the lodge.

And although Anthony Lakes officials, prior to the season, noted that it might have to limit daily visitors, and that season pass holders would have the first priority, such limitations turned out not to be necessary, Judy said.

“We did not turn anyone away,” she said. “Everyone who wanted to ski got to ski, which is what we’re all about.”

Because visitors were encouraged to use their vehicles as a sort of base camp — a place to eat, for instance — the resort didn’t require people to park close together to maximize use of the lot space, as in previous winters, she said.

That meant parking space was tighter than usual. However, Judy said the new sign along the highway at the base of the mountain, warning visitors that the parking lot was nearing or at capacity, was used just a few times.

Fletcher said she and her family had to adjust to the lodge being closed — for instance, using their vehicle as a place to warm up instead.

She said she also spent more time cross-country skiing this winter than in the past, in part because it’s strenuous exercise and thus a good way to get warm.

With the lodge closed, Anthony Lakes’ revenue from food and drinks dropped.

But Judy said the other options, including the ski-thru window at the Starbottle Saloon, proved more popular than she expected, and the revenue dip was “slight.”

The resort also was able to open its retail shop, with limited occupancy, during March, she said.

That said, Judy said resort officials are eager to return to a normal operation next winter.

“The lodge is an awesome amenity, and we’re looking forward to getting that back in action,” she said.