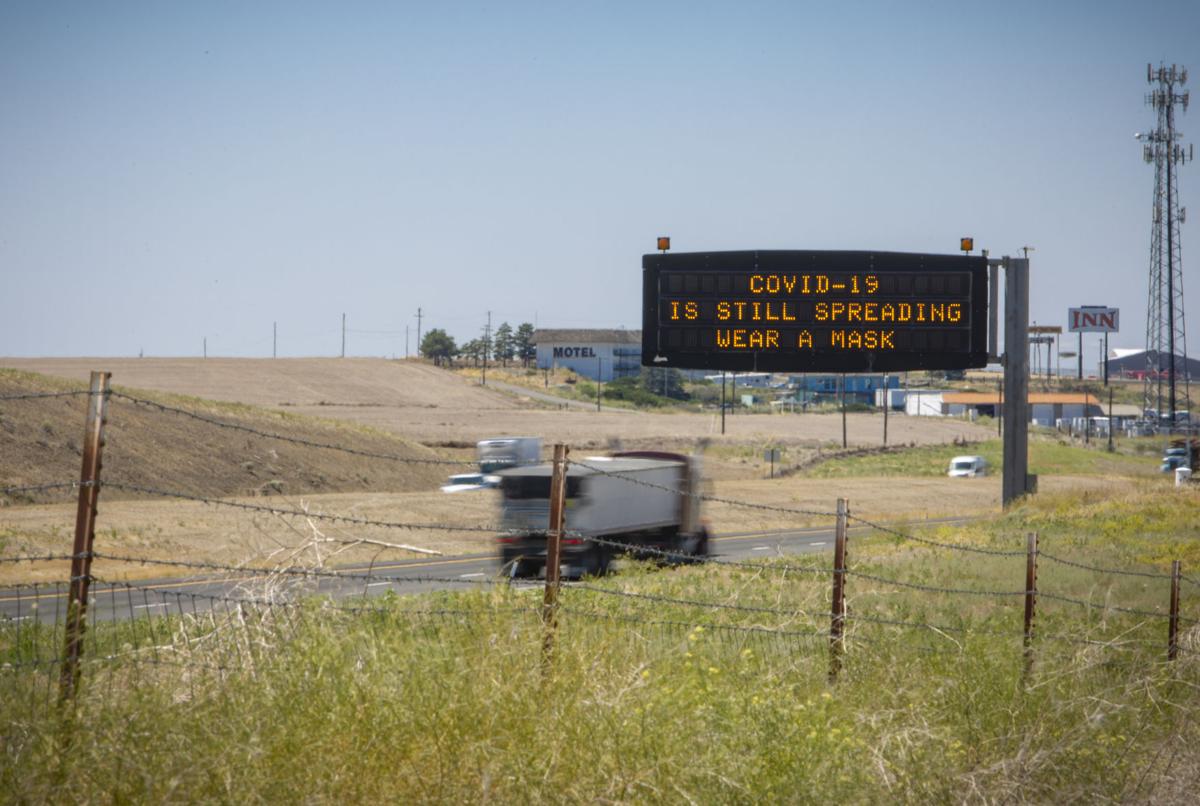 A highway sign over Interstate 84 outside of Pendleton advises drivers to wear a mask on Wednesday, July 8, 2020. 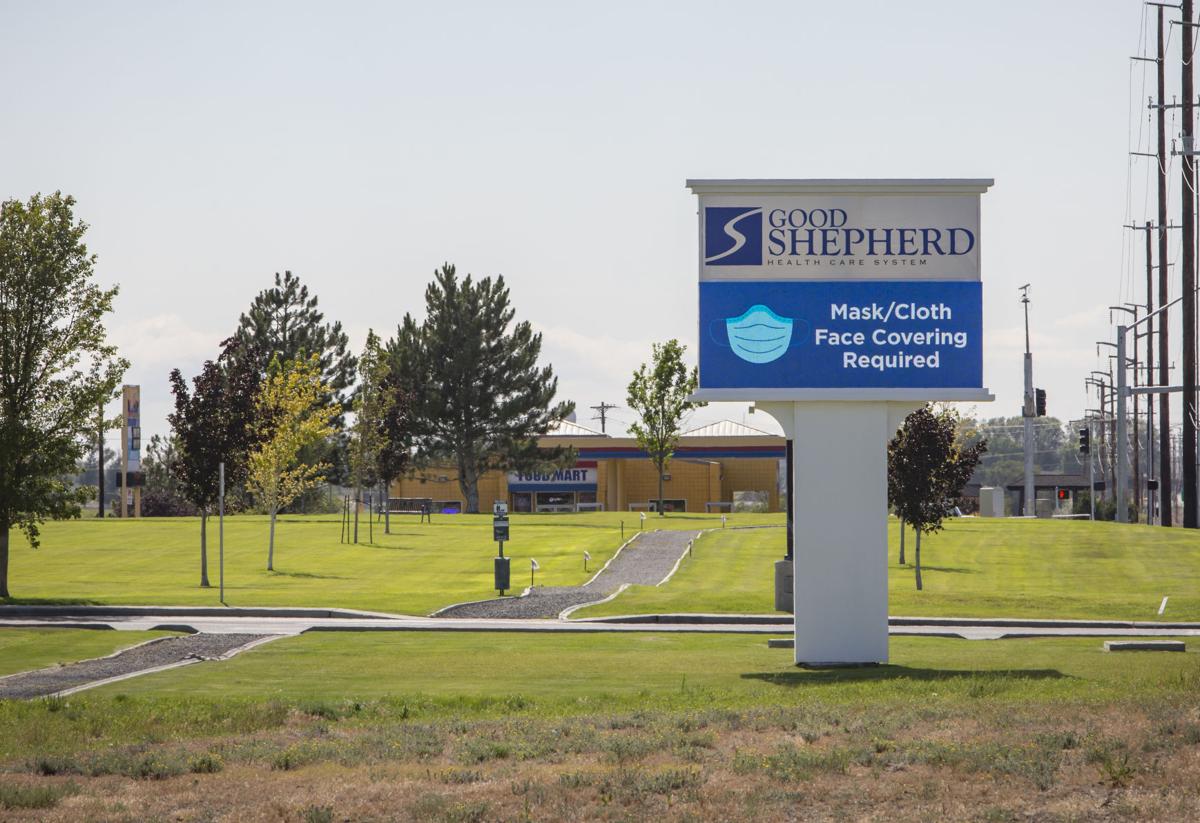 A sign at the Good Shepherd Health Care System campus in Hermiston advises that masks or face coverings are required on Tuesday, July 7, 2020.

A highway sign over Interstate 84 outside of Pendleton advises drivers to wear a mask on Wednesday, July 8, 2020.

A sign at the Good Shepherd Health Care System campus in Hermiston advises that masks or face coverings are required on Tuesday, July 7, 2020.

“Our concern is the lack of correlation between the rise in confirmed cases and a shutdown of restaurants, retail businesses, and reductions in numbers for things, such as church services,” Umatilla County Commissioner George Murdock stated in a message to local public officials on Tuesday, July 7. “Clearly, we want to flatten the curve and stop leading the state, but we need to find solutions that match the problem.”

As of Wednesday, July 8, Umatilla County has reported 882 cases of COVID-19 and seven deaths. By state metrics, Umatilla County is second and third, respectively, among the state’s 36 counties for cases per 10,000 and the rate of tests that are positive.

Umatilla County Commissioner John Shafer said along with reversing previous reopenings of businesses for the eight counties on Brown’s watch list, the state has floated ideas of mandating face coverings indoors and outdoors and restricting gatherings to smaller numbers in response to the sharp increase of cases.

Alisha Southwick, deputy director of Umatilla County Public Health, said the surge of cases continues to be linked to instances of people with mild symptoms going to work and exposing co-workers and other households to the virus.

“There’s a huge tension there of: You need to work to make income and support your family,” Southwick said. “And then there’s also the tension when you’re deciding whether or not to go to work that a lot of the time it’s mild symptoms, so you’re not worried about getting really ill potentially and the need for income is what takes precedence.”

Murdock has emphasized that the virus is particularly impacting local agricultural workers, many of whom are Hispanic and or migrant workers who wouldn’t necessarily be protected by reverting to previous shutdowns without addressing the current gap in protections for workers in those industries.

In an attempt to combat the spread, the Oregon Health Authority has provided remote assistance since last week for contact tracing investigations, Southwick said, and the county health department is adding six more staff members, three of whom are bilingual, to conduct investigations on confirmed cases as quickly as possible.

Umatilla County has also pledged at least half of its $2.3 million allotment in reimbursements from the federal coronavirus relief package to local business relief and officials have estimated that up to $3 million could be available throughout the county. A workgroup consisting of representatives from each community in the county is developing a grant application and dispersal method for that assistance, but officials have acknowledged that funding will only go so far for some local businesses.

Funding from the federal coronavirus relief package is also only eligible for specific uses by the county and can’t simply be funneled to individual residents in need of assistance.

But without local or state resources in place to offer financial protections, education and personal accountability only go so far to reduce the spread of the virus when residents most at risk are unable to stay home from work if that means losing the income they rely on to survive.

“If we are genuinely seeking a solution that works for them, it would be to provide a temporary safety net that enables them to stay away from work when they are ill in order to protect themselves and those with whom they work,” Murdock stated in the message. “Then we can look deeper at additional supports that would make a difference in the long term.”

There are also currently 12 Umatilla County residents with the virus who are hospitalized. While Murdock expressed concern about hospital capacity throughout the region as a result of recent case spikes, local hospitals are trying to rise and meet the challenge.

Emily Smith, marketing director for St. Anthony Hospital, said in an email that the hospital is not at capacity and is currently experiencing “typical patient volumes.”

Caitlin Cozad, communications director for Good Shepherd Health Care System in Hermiston, said in an email that Good Shepherd Medical Center had not yet had to open up its dedicated COVID-19 unit, which has 12 beds. Instead, the hospital has been treating patients in its Critical Care Unit, which has seven beds with four overflow beds in the Medical/Surgical Unit.

She said the hospital constructed temporary walls to set up the COVID-19 unit, and the beds there are similar to the inpatient beds in the Medical/Surgical Unit.

Cozad said there wasn’t a concern “at this time” about the hospital overflowing its capacity, and as for any difficulties transferring patients to other hospitals, “It has largely depended on the patient’s needs and changes day-to-day.”

Though the county’s hospital capacity is holding up at the moment, Murdock stressed the county is in need of the state and its resources to help craft a solution that addresses the unique challenges it’s facing in rural Eastern Oregon.

“We need the state to deploy resources out into the field for medical purposes, and we also need the state to develop a program that works with employers to provide benefits to people who can’t afford to stay home if they’re sick,” Murdock said. “The county isn’t going to be able to solve the problem. It needs to be a collective effort.”

And while they acknowledged wearing masks, washing hands, abiding by social distancing and other preventative measures that individuals are able to take won’t completely solve the local issues that have led to the recent surge, Murdock and Southwick said those steps are still a piece of the solution.

“Wearing masks isn’t the whole answer, but it’s one answer and I think we need to focus on every possible answer,” Murdock said. “Wearing masks is a small price to pay for trying to stem the tide.”

On July 8, the Good Shepherd Health Care System announced it was holding a free drive-through COVID-19 testing clinic on Monday, July 13 from 7-11 a.m. in the parking lot of the Columbia Professional Plaza, 1050 W. Elm St. in Hermiston (enter on the Elm Street side).

The event is limited to 160 slots on a first-come, first-served basis. Pre-registration is open on Thursday, July 9 and Friday, July 10 from 8 a.m. to 5 p.m. by calling 541-667-3459. Results are expected to take between two and seven days and can be checked online at www.gshealth.org/myhealth.