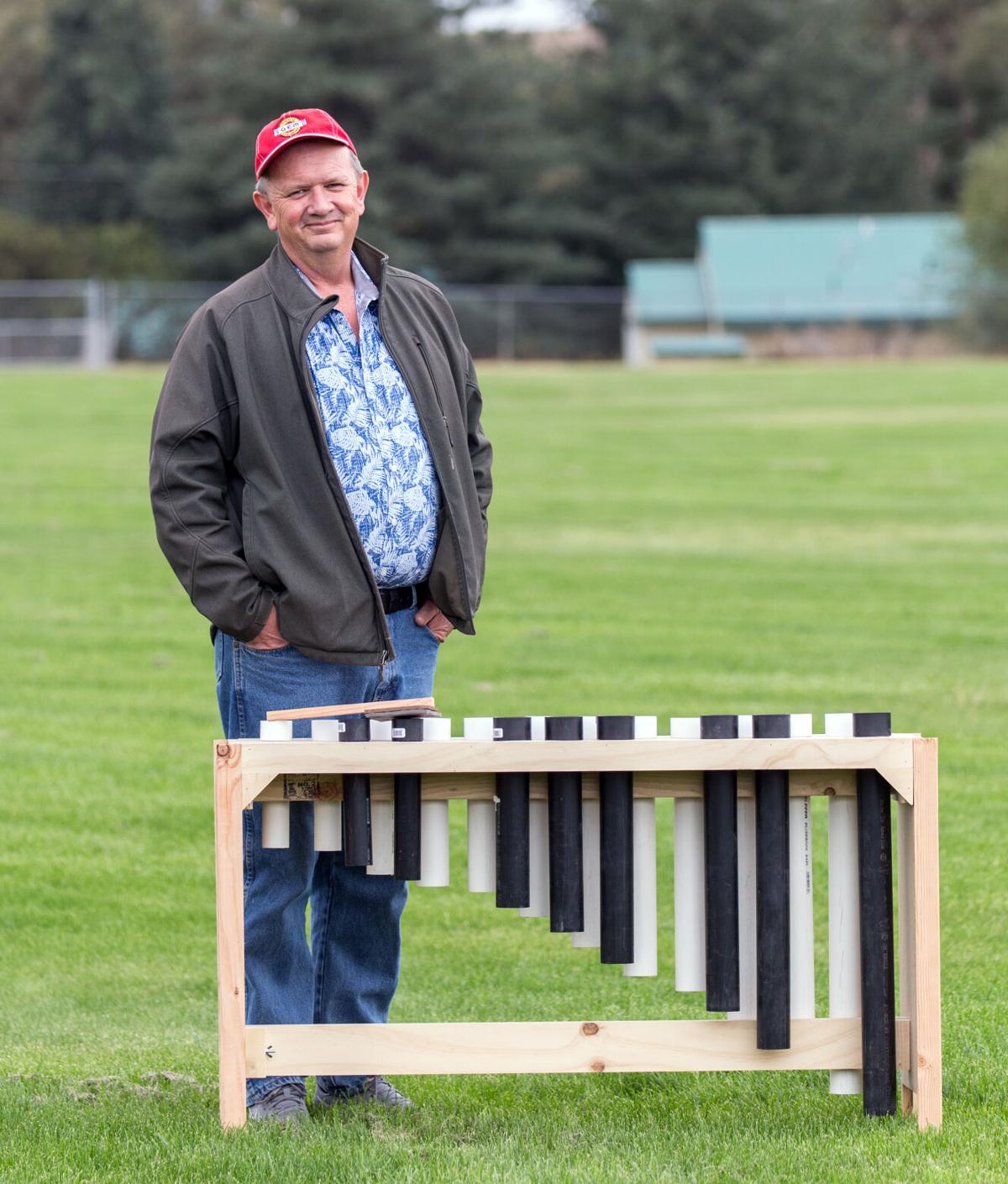 Weston-McEwen High School band director Rob McIntyre poses with an instrument he created and mass produced for his high school and middle school bands. McIntyre refers to both instruments and musicians as Pandemic Players. 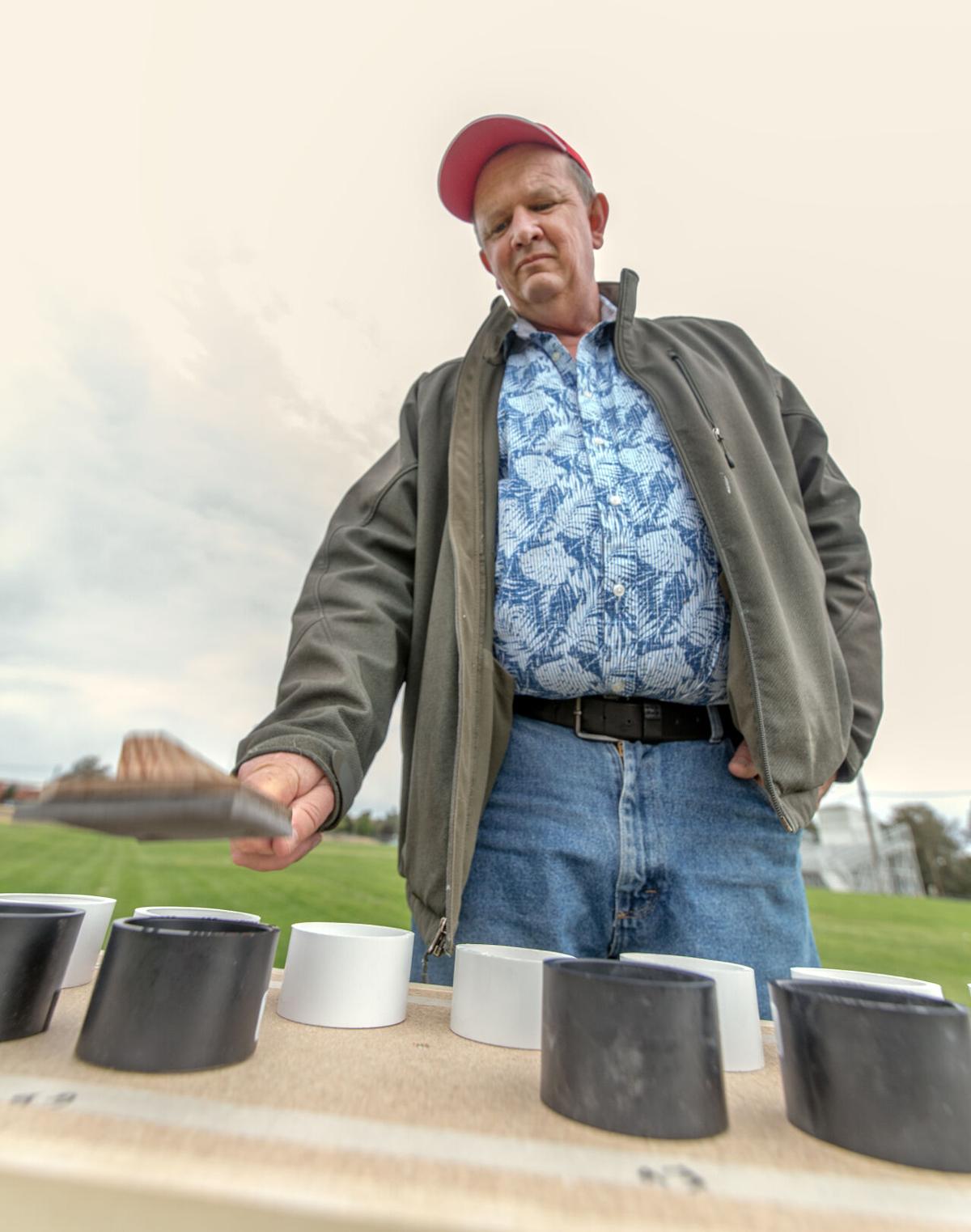 Weston-McEwen High School band director Rob McIntyre poses with an instrument he created and mass produced for his high school and middle school bands. McIntyre refers to both instruments and musicians as Pandemic Players.

Even if the pandemic waned enough so that students could return to Athena schools in the fall, social distancing wouldn’t allow his musicians to sit in the band room together.

“The thing that’s different about music is that if you’re blowing into an instrument, distancing is not 6 feet, it’s more like 12 feet,” McIntyre said. “It might as well be 50 feet — you’re not going to have a room big enough to put the kids in.”

So last spring, McIntyre’s notoriously inventive brain went into problem-solving mode. He created his own instrument — one that doesn’t require breath — and temporarily renamed his high school and middle school bands the “Pandemic Players.” Over the summer, he and others built 80 of the unique tuned percussion instruments and distributed them to students willing to play them.

The instrument consists mainly of PVC pipes, particleboard and glue.

McIntyre, known as “Mr. Mac,” took inspiration from a performance company known as the Blue Man Group. The Blue Man performers, a trio of nonverbal and comedic musicians sporting blue skin, play a variety of percussion instruments, including one marimba-like instrument that uses different lengths of PVC pipes. The musicians use flat mallets to force air into the pipes to create hollow thunks of sound. The longer the pipe, the lower the note.

McIntyre thought he could build something similar for his students.

“I needed to create an instrument that doesn’t involve blowing air, that brings distance standards back to 6 feet, that can be mass produced and isn’t terribly expensive,” he said. “I didn’t want it to be electronic. I wanted it to be mechanical so kids could look at it and say, ‘How does this work?’”

McIntyre got advice from Lake Oswego musician Kent Jenkins, who plays a PVC pipe instrument similar to the one McIntyre wanted to build.

The band instructor built his prototype for about $45. To finance the 80 instruments, community members and businesses paid for materials that included irrigation and plumbing pipe and wood, along with masonite and sheets of rubber for the mallets. The instrument can be broken down for transport.

McIntyre spent some time getting the tuning and pitch right. After building the first deck with plywood, he realized the wood wasn’t stiff enough, allowing the tubes to bounce in the frames. He replaced it with inexpensive particleboard that had less resin in it and therefore less deflection.

McIntyre’s small team started building the instruments in late July, about the time Oregon Gov. Kate Brown announced metrics about when school districts could return to in-person instruction. In order to resume school, Umatilla County would have to have 10 or fewer cases per 100,000 (or about eight cases) over seven days for three weeks straight. That week, the county reported 343 cases. It would be a while before McIntyre’s band students would gather in person to make music.

The instruments came together fairly quickly. Athena School Board member Preston Winn volunteered to cut all the pipes, which amounted to 1,600 cuts and about 3,000 feet of plastic. McIntyre built the frames. Student Seth Lynde and his dad, Erik, cut holes in the decks. McIntyre’s children, Alex and Hannah, glued couplers to the tops of the pipes to create a snug fit that would prevent the pipes from falling through.

On Aug. 29, about 10 people gathered to assemble the instruments. The frames sat in a line that spanned a complete city block. Amy Rogers, mother of two of McIntyre’s musicians, installed many of the 1,600 pipes.

“I really wanted to support the effort in any way I could — and Rob specifically — because he dreamed up this crazy idea for the students, and then dared to actually follow through with the hard work to make it a reality,” she said. “Each student has their own instrument, and Mr. Mac suggested that the students paint and customize theirs if they want. It has given students a little bit of happy at a time when they really need it.”

McIntyre said his student musicians are feeling some loss, especially his bagpipers and horn players who are likely stalled out for the entire school year.

“The first thing they had to do was accept they can’t blow their horns,” he said. “A few of them have had a hard time.”

But most embraced the idea of the Pandemic Players, which is also the name of the instrument itself.

“The reaction for the most part is that this is a cool thing,” McIntyre said.

“I just think it’s really awesome that Mr. Mac has gone above and beyond to make sure that we have music this year,” Elsa said.

“It’s different than our band instruments,” said Lyla, “but it’s fun to try and learn something new.”