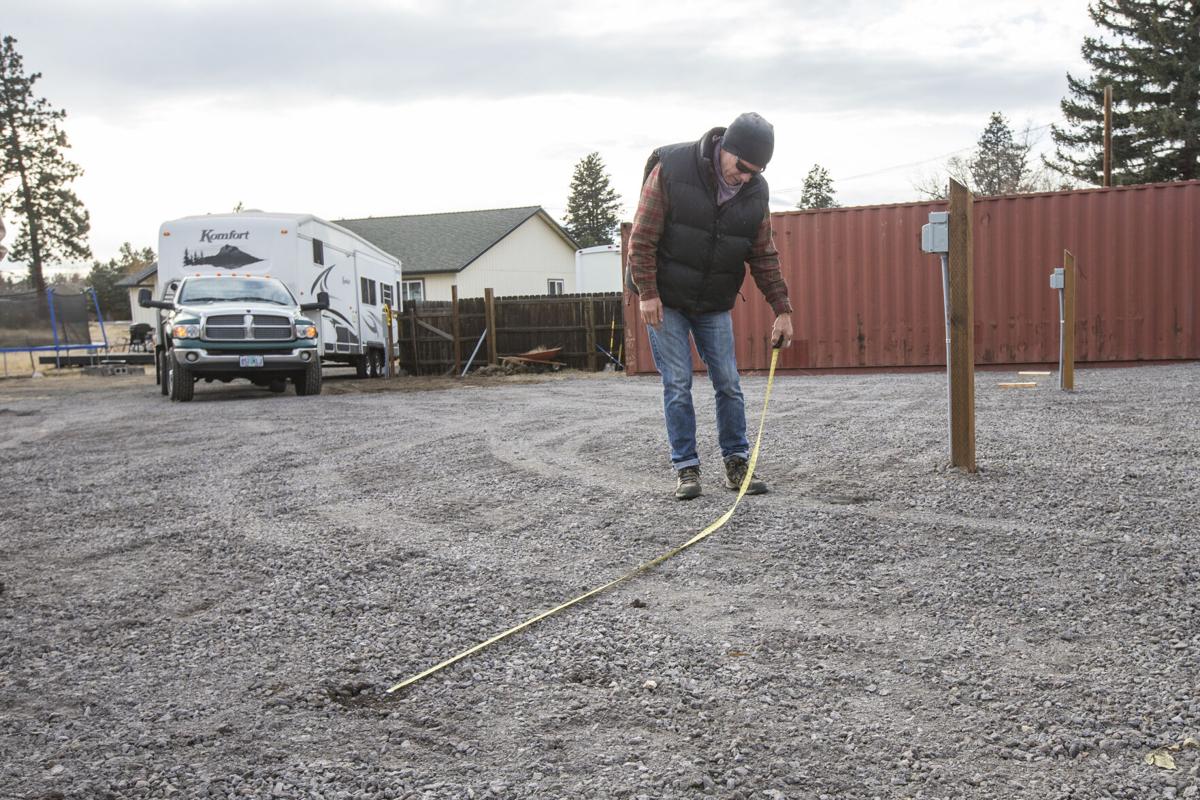 Alan Sawyers, who works with DAWNS House, measures where to park a RV while working on setting up the transitional housing site in Bend on Nov. 12, 2020. 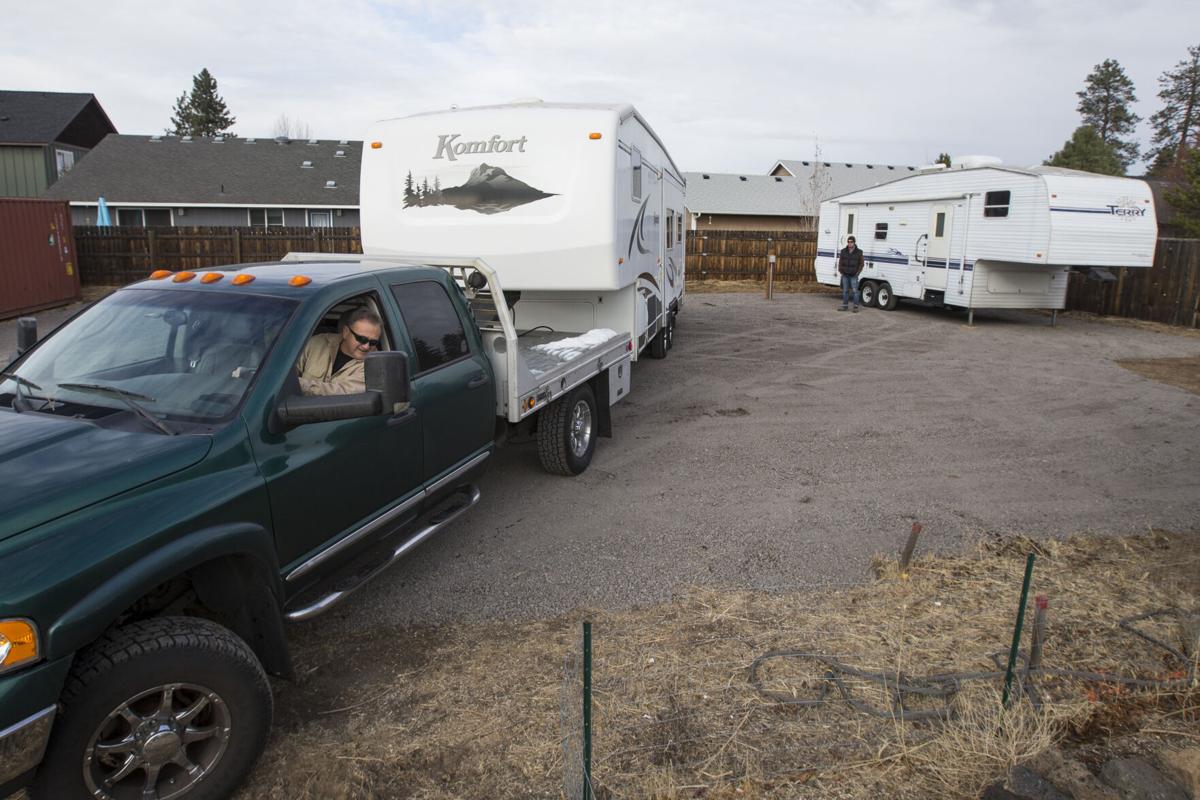 Rich Redwine, of La Pine, delivers a trailer to DAWNS House, located on Dean Swift Road in Bend on Nov. 12, 2020. 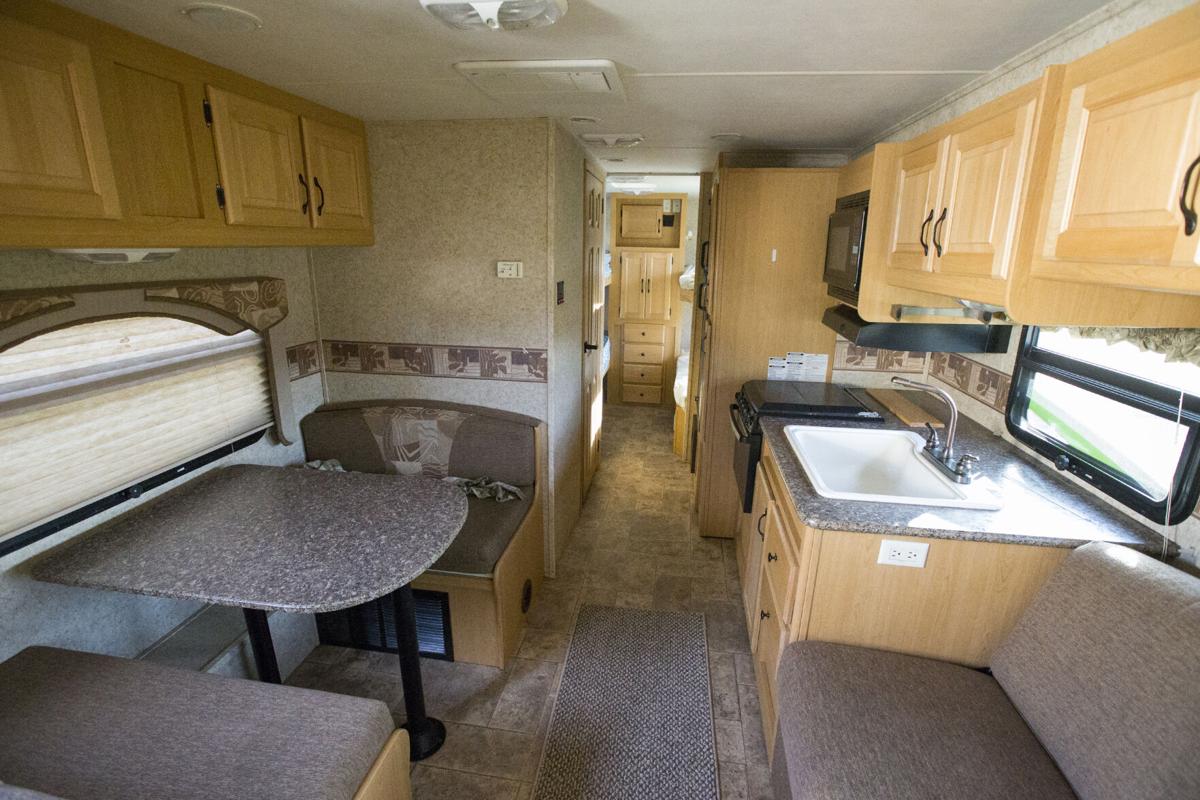 The interior of a trailer that will be available for a homeless family to live in at DAWNS House.

Alan Sawyers, who works with DAWNS House, measures where to park a RV while working on setting up the transitional housing site in Bend on Nov. 12, 2020.

Rich Redwine, of La Pine, delivers a trailer to DAWNS House, located on Dean Swift Road in Bend on Nov. 12, 2020.

The interior of a trailer that will be available for a homeless family to live in at DAWNS House.

BEND — This winter, four families who otherwise would have likely spent the winter living in their cars or on the streets will now have a home.

These families will have a place to go thanks to a new alternative housing RV Program started by DAWNS House, a Bend nonprofit organization that offers transitional housing for women suffering from addiction.

The project, which launched Wednesday, Nov. 18, went from inspiration to reality in less than 60 days, said Dawn Holland, the executive director of DAWNS House. The program is the first of its kind in Bend, thanks to the city’s COVID-19 emergency declaration, which allowed it to move forward.

“I feel like the universe kind of orchestrated this whole thing,” Holland said.

The inspiration for the RV program began as far back as last summer, when Holland and her daughter traveled around in their own RV.

“I thought, ‘Wow, someone could really use this as a home,’” Holland said.

But that idea turned into action after Holland attended a meeting about Bend’s cold weather shelter and heard about the number of families that have been displaced because of COVID-19-related hardship.

“The need is so immense,” Holland said.

For years, the property next to DAWNS House off Dean Swift Road has sat vacant. So one day Holland asked the owner of the land, who also owned the land where DAWNS House sits, if she could rent the lot and put RVs on it for housing. The owner said yes.

Then she heard that there was funding available through the coronavirus relief act, which is federal money that was diverted to local communities for COVID-19 relief, to pay for the project. She received $48,000 from United Way, which helps the city distribute the funding, and was able to buy five used RVs: four for families and one for an on-site supervisor to manage the program.

In less than three weeks, Holland and her team turned an empty lot into a gravel lot with access to electricity for four new homes.

The housing is free to help people save money and get back on their feet, but limited to three months, Holland said. Though families don’t have to identify as addicts, because her other properties are drug- and alcohol-free, families who move into the RVs also must agree to be sober.

“It’s a drop in the bucket. The need is so great,” Holland said. “But for those four families, it will mean a lot.”

Holland’s passion to help people comes from the fact that she received help herself to get to where she is today.

“I’m a woman with addiction and alcoholism, and I came from sober living,” Holland said. “After dozens of detox days and treatment centers, it was the only thing that worked for me.”

She struggled with addiction for years until someone told her to contact a Bend bed-and-breakfast that was transformed into a women’s transitional home called Country in the City Women’s Housing, according to past reporting in The Bulletin.

She eventually earned a degree from Central Oregon Community College in business and restaurant management. But when she heard the transitional home she lived in was closing, she decided to open DAWNS House in May 2015. To date, Holland said she has helped 600 women.

Before COVID-19, a project like this wouldn’t have been possible in the city of Bend.

Holland is the first to formally apply for and take advantage of a provision in the city’s emergency COVID-19 declaration that allows for temporary camping on private property, said Susanna Julber, a senior project and policy manager at the city.

“Traditionally, camping wouldn’t be allowed on private property in the city,” Julber said.

But as the number of displaced people grew because of the pandemic and economic fallout that followed, more churches and other organizations became interested in wanting to let people live legally in their parking lots.

“These are not ideal situations for anybody … but many people don’t have options,” Julber said.

The emergency order will remain in place until the state moves into Phase 3 of reopening — essentially meaning, until there is a COVID-19 vaccine. Until then, the city will review applications to make sure organizations have sanitation and safety plans, but will not review temporary housing sites like Holland’s for things like building code.

“We don’t want this to be too onerous,” Julber said.

Holland said she would like to continue this housing program long term, but whether she will be able to do that once the emergency order expires remains unclear. Julber said there are currently conversations happening at the city about allowing different kinds of housing options in the future, though nothing is set in stone.

Holland said it feels good to be able to say “yes” for once when she gets emails from people she knows looking to house someone, but said the endeavor is also new and scary.

She wants the pilot to work so others will be inspired to do something similar, she said.

In normal times, for example, Holland could ask for donations to help get more household items into the RVs for families. But with COVID-19, her nonprofit isn’t taking donations, so she is hoping an online auction will help raise money to buy these items.

She hopes to partner with other organizations to help with ongoing operations costs, as well. The coronavirus relief act money has been spent, meaning right now the nonprofit is relying on its own coffers to pay for the program.

Regardless of the challenges, Holland said she believes it was important to do something.

“I just really feel that if people are capable in any way, shape or form they have the ability to drastically change a person’s life,” Holland said.