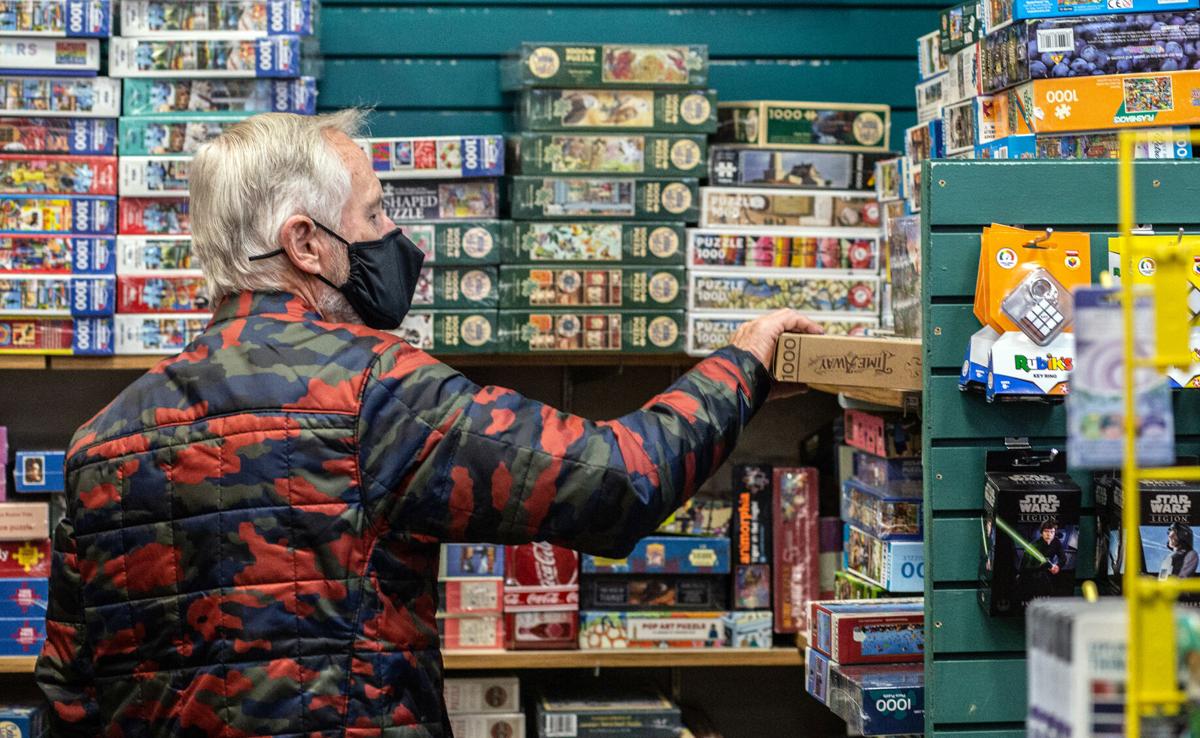 A customer at Walla Walla Book & Game in Washington browses in the puzzle section on Tuesday, Dec. 8, 2020. The popularity of board games has shot up during the pandemic. Sales of both classic and contemporary tabletop games are soaring. 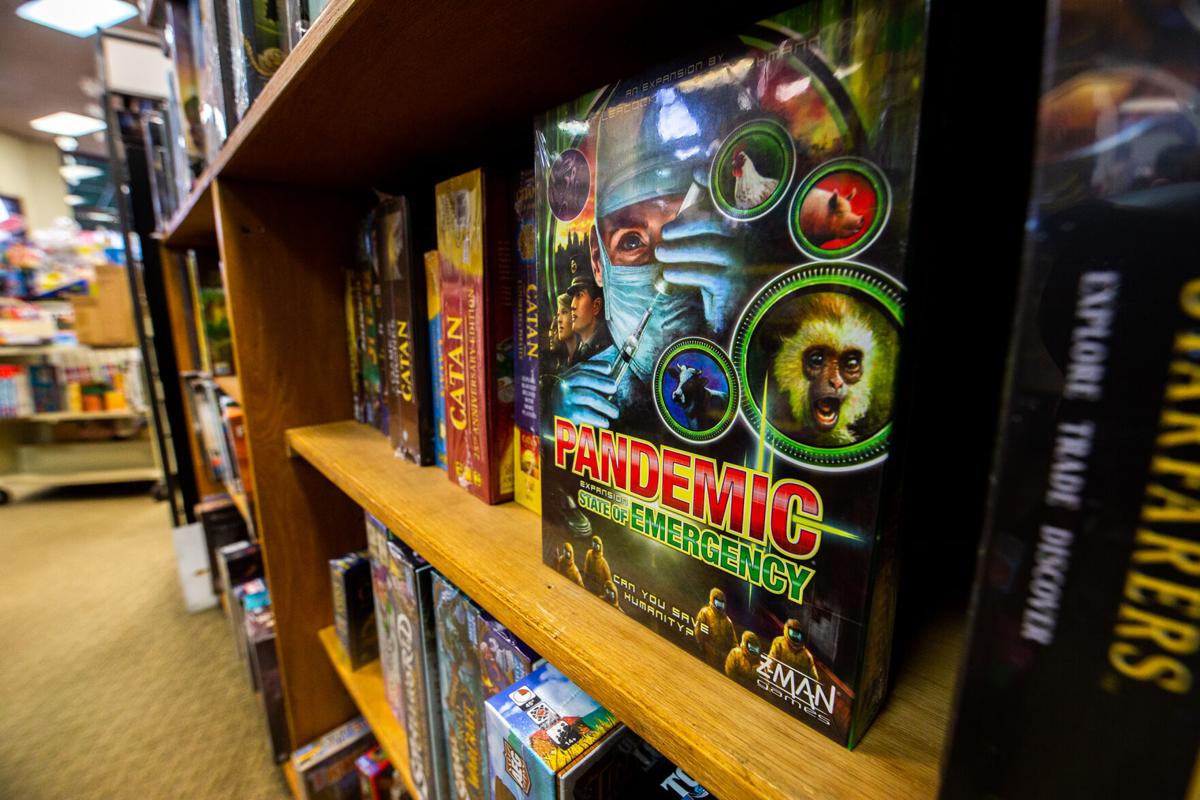 Julie Aichele, a game and puzzle buyer at the Walla Walla Book & Game in Washington, said customers’ demand for games has spiked. 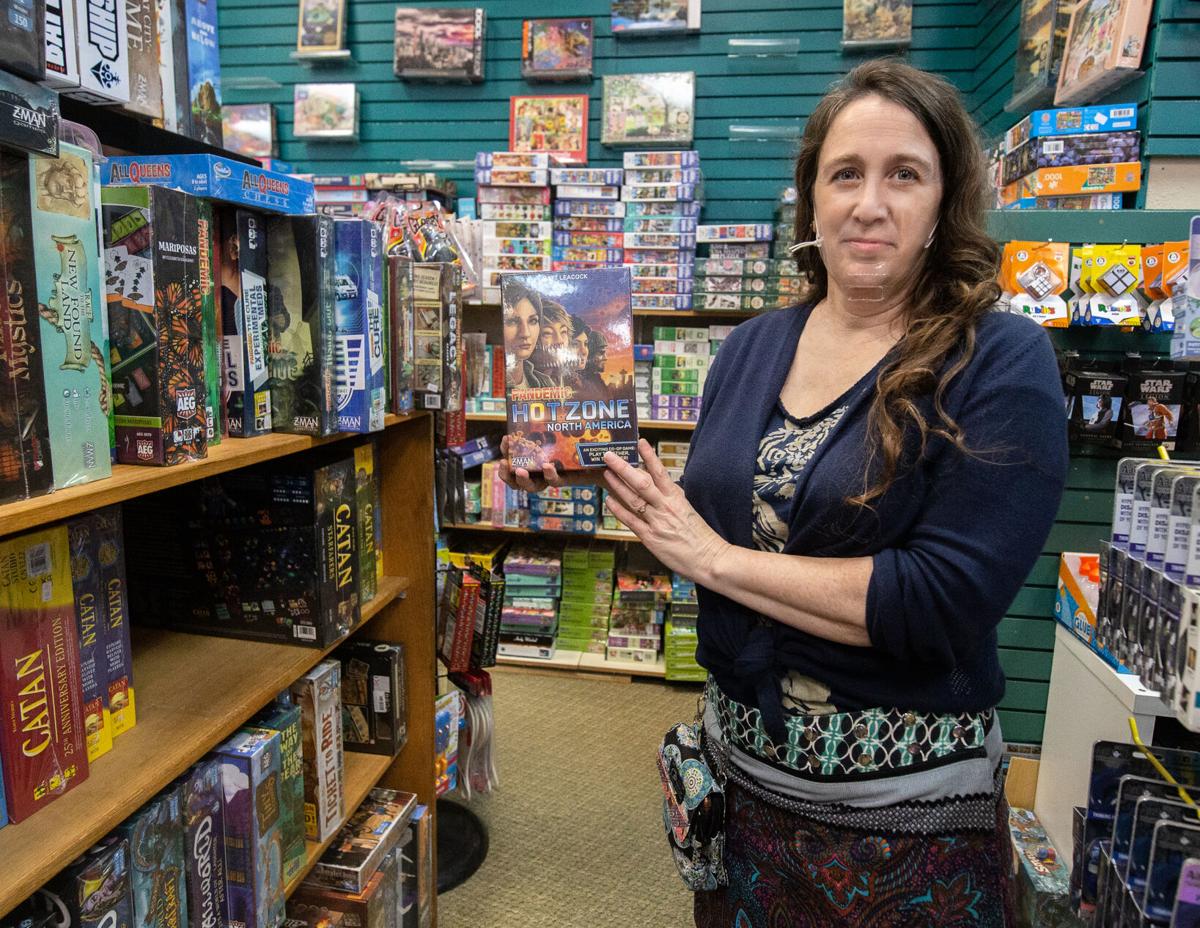 Julie Aichele, game buyer at Walla Walla Book & Game in Washington, holds up one of the hot-selling board games of the last few months, Pandemic: Hot Zone North America.

A customer at Walla Walla Book & Game in Washington browses in the puzzle section on Tuesday, Dec. 8, 2020. The popularity of board games has shot up during the pandemic. Sales of both classic and contemporary tabletop games are soaring.

Julie Aichele, a game and puzzle buyer at the Walla Walla Book & Game in Washington, said customers’ demand for games has spiked.

Julie Aichele, game buyer at Walla Walla Book & Game in Washington, holds up one of the hot-selling board games of the last few months, Pandemic: Hot Zone North America.

The popularity of board games has shot up during the pandemic. Sales of both classic and contemporary tabletop games are soaring. Turns out people are hunkering down at home and playing games as a way to fend off boredom and avoid the depressing news cycle. It’s harder to dwell on a deadly virus if you are engaged in a lively game of Yahtzee, Scattergories or Taboo.

“We’ve seen a surge in sales for games across the board,” Aichele said. “A lot of family games are doing really well. All those classics we all grew up with have seen an uptick.”

The store’s cashiers ring up sales of a long list of other games too: Ticket to Ride, CodeNames, Catan, Betrayal at House on the Hill, 7 Wonders, Azul and even the aptly named Pandemic.

In the latter game, players can save humanity in 45 minutes or less. Or not. Players, as medics, researchers or scientists, frantically traverse the world to treat outbreaks and find cures. If they succeed, humanity survives. If not, the worst comes to pass.

At the Walla Walla store, games and puzzles sold briskly even during a state-mandated shutdown. The store continued to fill call-in orders that were picked up curbside.

The games and puzzles flew off the shelf more quickly than anticipated.

“I usually do a big order once a year from my various distributors,” Aichele said. “In April, we had to restock.”

By that time, suppliers had run short. The game Wingspan, for instance, wasn’t to be had.

Sales of chess sets shot up too, but that may owe less to the pandemic and more to the series “The Queen’s Gambit,” which premiered in mid-October on Netflix.

At the Pendleton Walmart, game and puzzle sales are outpacing last year’s. Store manager Shawna Nulf marveled at the popularity of a game called Pendleton-Opoly, which plays like the traditional game of Monopoly but uses local landmarks, such as the Rainbow Cafe, Hamley’s Steakhouse & Saloon and Hal’s Hamburgers.

“We can’t keep it in stock,” Nulf said. “People are calling daily to see if it is in. We sold two shipments. There are over 300 (games) coming in next week.”

She theorizes that families are looking for ways to stay sane during isolation.

“With COVID, people are staying home,” she said. “They are trying to find ways to entertain their family.”

“People are getting laid off of work,” Brown said. “There’s nothing to do at home. The stuff we sell really cures that boredom.”

Addison Schulberg, of Pendleton, isn’t off work, but spends more of his off hours at home. He and girlfriend Zoe Holmes spend hours playing a card game called Anomia with Schulberg’s parents, Carol Hanks and Ken Schulberg. He said his huge collection of board games will likely get more attention as the pandemic wears on.

“I’ve been playing a lot more Scrabble,” he said. “That has definitely increased since COVID began. Never had time before.”

Game lover Karl Davis once got his fix with a board game group that met weekly at the Pendleton Center for the Arts. When COVID-19 struck, they continued to play virtually on a platform called Tabletop Simulator.

“We actually started playing board games online since we couldn’t play in person,” Davis said.

In addition, he plays at home with his wife, Nina Blasser, and another couple in their COVID bubble. Among others, they playful Azul and Scythe, a competitive Risk-like board game. He and Blasser play solo games while sitting at their dining room table. She likes a farming simulation game called Agricola. Davis is partial to Arkham Horror.

Aichele said she finds time for game playing as well. She tries out many of them before ordering for the store. Her faves include Ticket to Ride, Carcassonne, Catan and Munchkin. Her husband prefers strategy games, such as Axis and Allies or Risk.

With winter weather keeping people inside and people working from home, she figures the obsession with board games and puzzles will continue for a while.

“People are home,” she said. “Families are coming together again. What better than to do a puzzle or a game?”