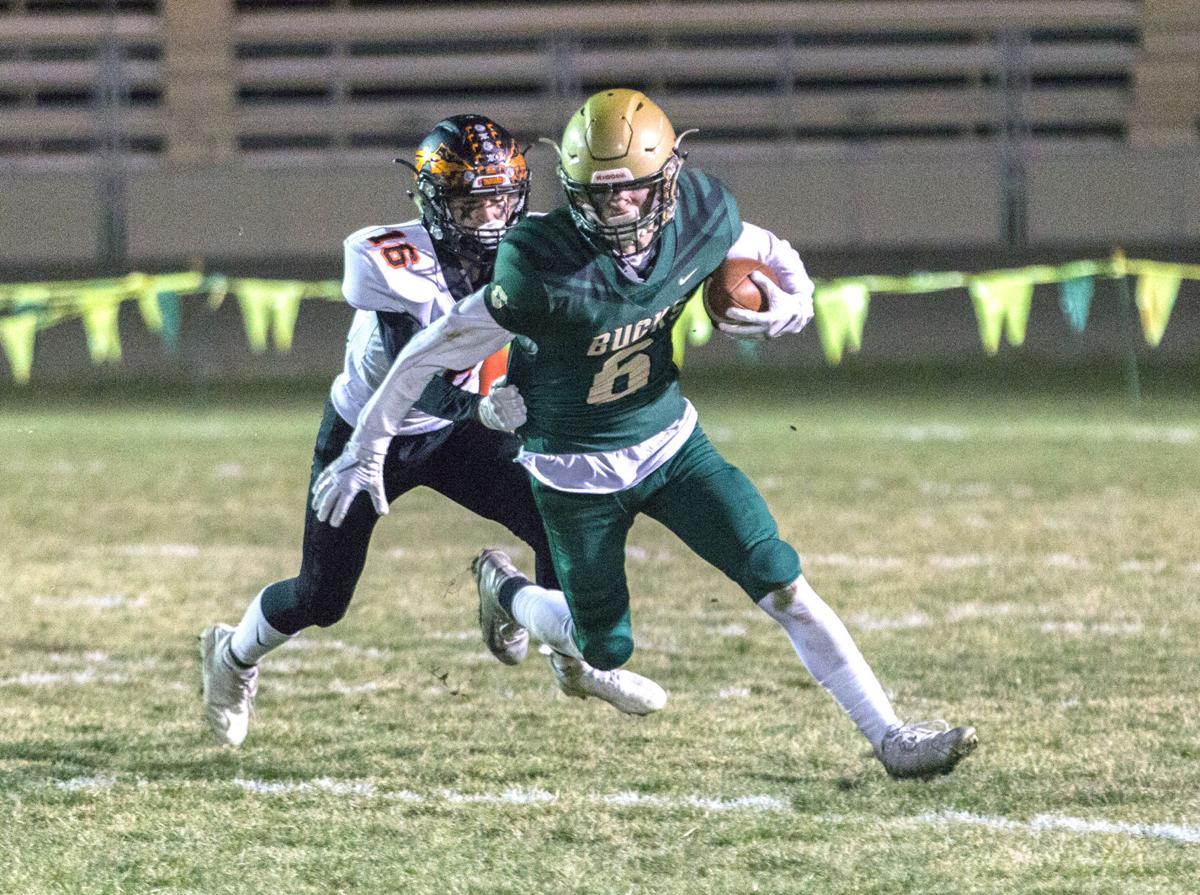 Pendleton’s Ty Patrick (6) attempts to evade Scappoose defender Thomas Greiner during a 2019 state playoff game at the Round-Up Arena. Gov. Kate Brown said on Wednesday, Feb. 10, that high school football will be allowed to resume after being postponed in fall 2020. 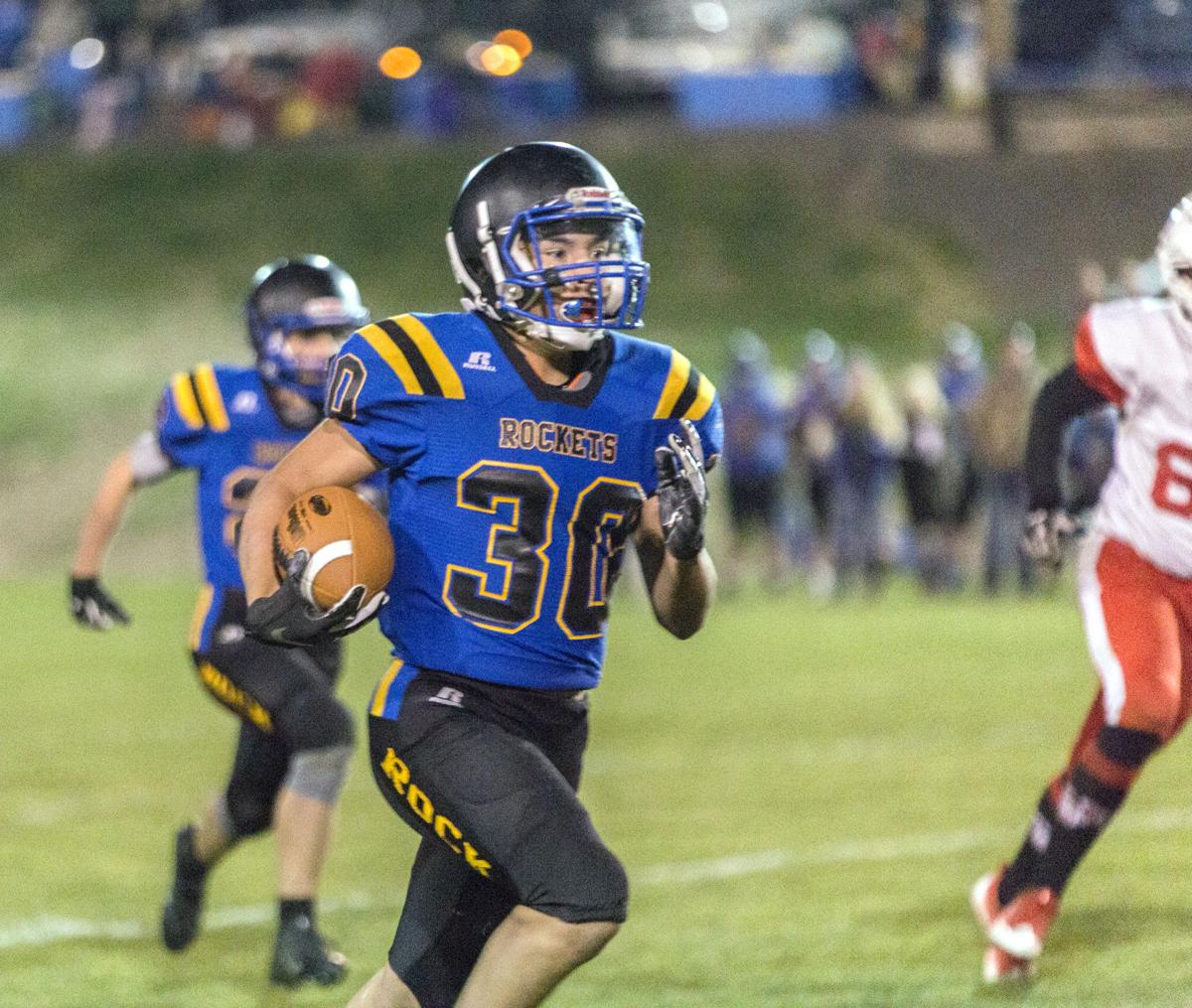 Former Pilot Rock/Nixyaawii running back Tyasin Burns races downfield for a touchdown during a 2019 game against Union. When the pandemic-impacted season begins on March 1, Burns will be suiting up for Pendleton.

Pendleton’s Ty Patrick (6) attempts to evade Scappoose defender Thomas Greiner during a 2019 state playoff game at the Round-Up Arena. Gov. Kate Brown said on Wednesday, Feb. 10, that high school football will be allowed to resume after being postponed in fall 2020.

Former Pilot Rock/Nixyaawii running back Tyasin Burns races downfield for a touchdown during a 2019 game against Union. When the pandemic-impacted season begins on March 1, Burns will be suiting up for Pendleton.

PENDLETON — Pendleton High School football coach Erik Davis is excited to see running back Tyasin Burns work his magic at the 5A level.

After Gov. Kate Brown eased restrictions on Wednesday, Feb. 10, on outdoor contact sports, Davis may get his wish.

A news release from the governor’s office said the Oregon Health Authority will revise its guidance for outdoor contact sports, easing restrictions for schools that have returned to at least limited in-person learning.

“The door is open, which is exciting,” Pendleton Athletic Director Mike Somnis said. “We have been hoping for this.”

Football teams that began noncontact practices on Monday, Feb. 8, will be able to hold contact practices next week and start the season as scheduled on March 1, provided they meet the academic requirements and follow health and safety protocols.

Schools in high-risk counties, like Umatilla, must offer on-site responsive testing for symptomatic individuals and close contacts, contact information for contact tracing, a waiver identifying health and safety risks, and a commitment to isolation and quarantine if exposed to COVID-19, according to a news release from Brown’s office.

Burns, who played for Pilot Rock last year, goes to school at Nixyaawii, which does not have a football program.

In January, the Oregon School Activities Association’s Football Ad Hoc Advisory Committee denied the schools’ ability to continue to co-op unless they moved up to the 2A level.

In Burns, the Bucks are getting the Special District 3 West Player of the Year. During the regular season, Burns ran for 2,382 yards and 17 touchdowns. He also had 821 receiving yards with six touchdowns. Defensively, he had 59 solo tackles, 37 assists, three interceptions and four quarterback sacks.

Pendleton’s first game is scheduled for March 5 at Parkrose.

The Bucks’ cross-country team already has been rolling up the miles. Its season begins on March 3 with a home dual meet.

“Just to be able to get back out and practice again has been great for the coaches and kids,” Bucks cross-country coach Ben Bradley said. “We have had 17 to 22 kids out every day. It’s that group that keeps showing up and going wherever and doing whatever.”

The Bucks will host three meets in March — the 3rd, the 17th and 31st — and they are hoping to use the Pendleton Adventure Trails by the airport.

“We need to contact Pendleton Parks and Rec to see if they would allow that,” Bradley said.

The Pendleton girls soccer team is scheduled to open its season on March 2 with a nonleague road game against Hermiston.

“I have definitely noticed a change in the players,” said first-year coach Kiana Rickman. “They seem so thankful to be there. We have been without sports for almost a year. They feel lucky to have practices, and now games. We have been super good about masks and social distancing.”

The Bucks are led by returning all-Intermountain Conference goalie Lindsey Pasena-Littlesky. The team has just two seniors, a handful of juniors, and a large group of underclassmen.

Indoor sports, including volleyball, basketball and wrestling, continue to be prohibited in all counties.