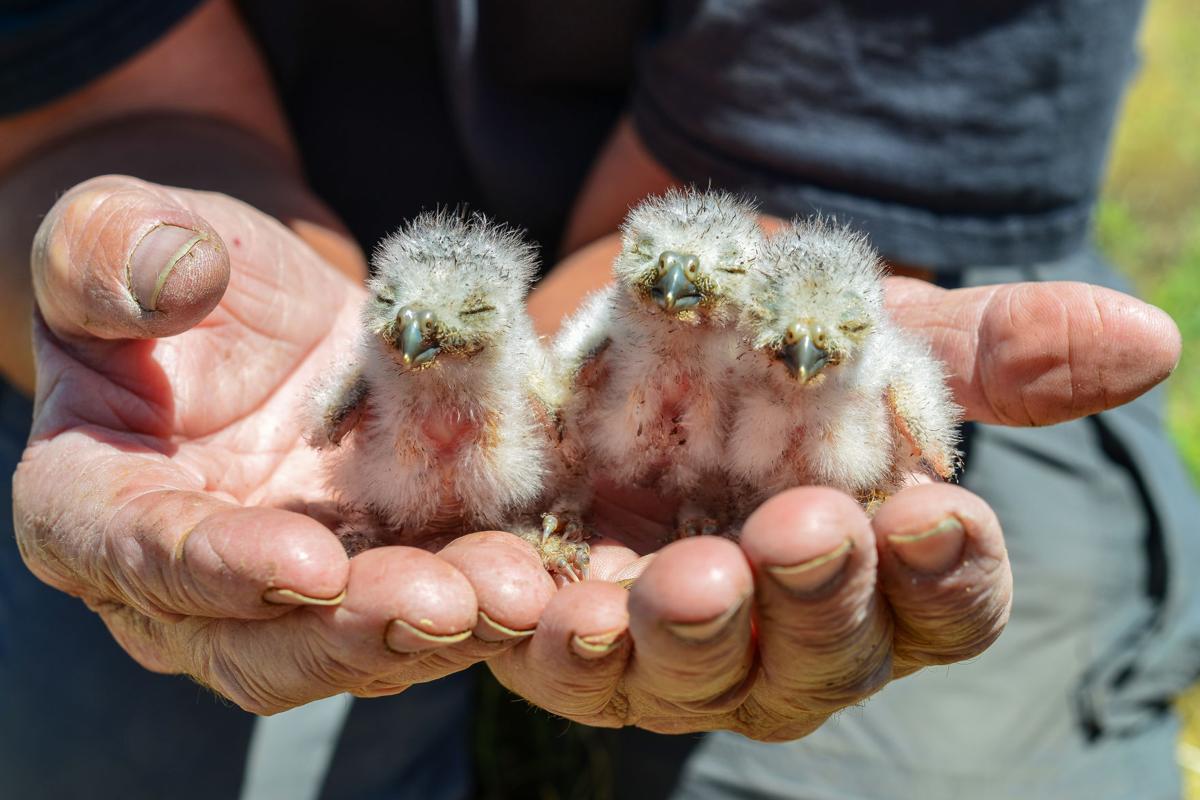 David Johnson, director of the Global Owl Project, holds a trio of 6-day-old owlets in June 2019. 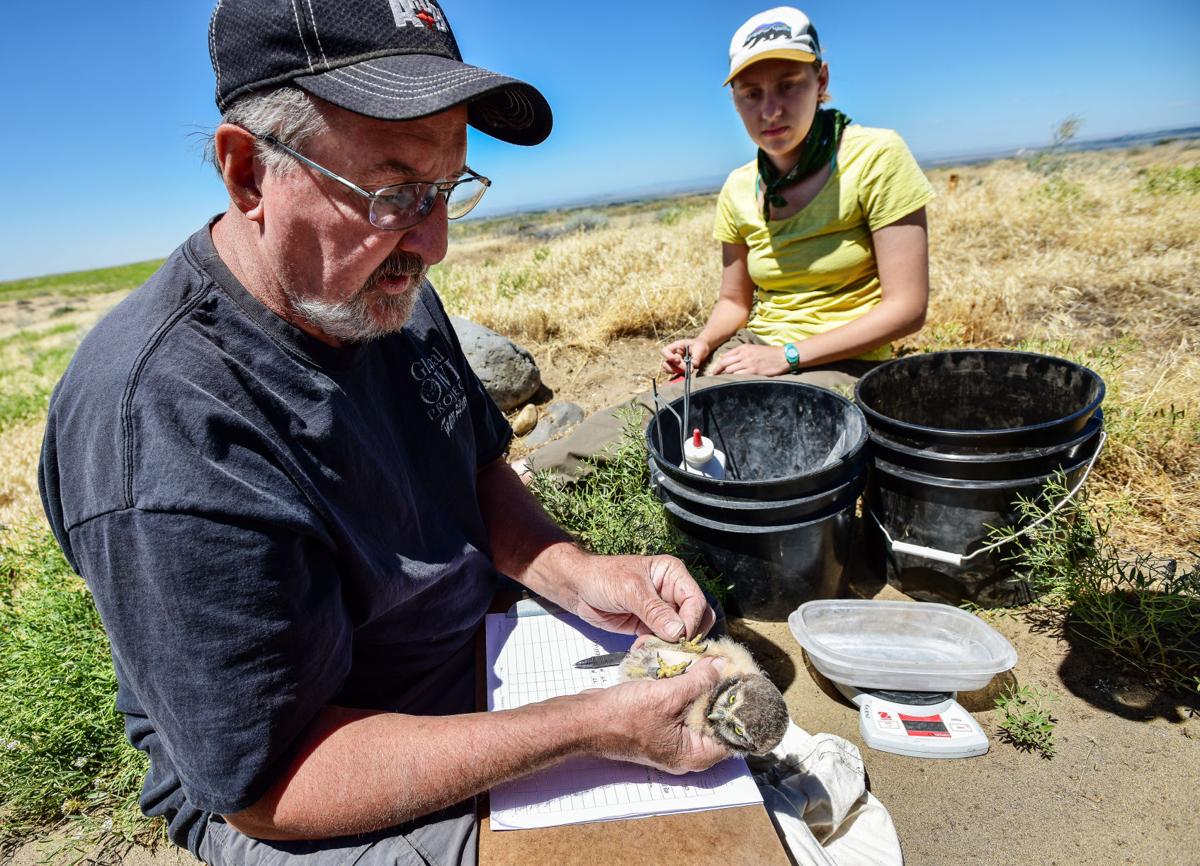 David Johnson, director of the Global Owl Project, checks on the health of a juvenile burrowing owl as his intern, Anya Nelson, looks on while banding the birds on the former Umatilla Chemical Depot outside of Hermiston in June 2019. 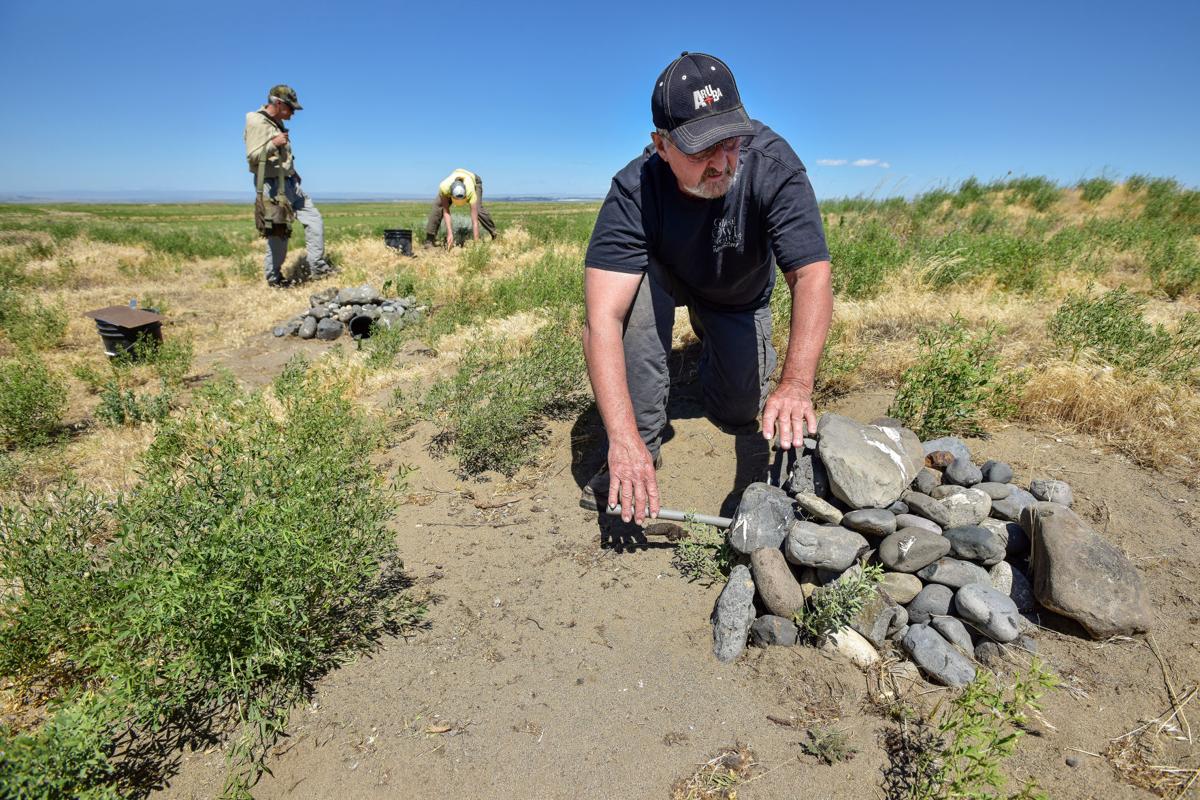 David Johnson, director of the Global Owl Project, holds a trio of 6-day-old owlets in June 2019.

David Johnson, director of the Global Owl Project, checks on the health of a juvenile burrowing owl as his intern, Anya Nelson, looks on while banding the birds on the former Umatilla Chemical Depot outside of Hermiston in June 2019.

UMATILLA COUNTY — For 11 years, David H. Johnson, director of the Global Owl Project, has gotten to know the burrowing owls of the Umatilla Chemical Depot.

He knows which owls will put up a fight and which will hold still while he handles them. He knows how many eggs they laid this year. He knows their children and their grandchildren.

After he returns for one more spring at the depot next year, however, his 12-year project to revive the depot’s previously declining burrowing owl population will come to an end.

“After that, I have resigned myself to letting go,” he said. “It will be hard because it has been a joyful thing.”

The project to create artificial burrows for the owls has done more than multiply the depot’s owl population by many times over. It has also led to new scientific discoveries about the species as a whole, from their mating habits to their migration patterns.

“I certainly have a lot to write up,” Johnson said.

The reason the depot’s owl population needs artificial burrows started with pronghorns, the antelope-like animals that used to roam the land back when it was an active Army depot.

Fenced in on all sides, the herd because dangerously inbred, causing a genetically weak population that began to dwindle. Johnson said people at the depot thought the reason was that there were too many coyotes preying on the pronghorns, however, and so they trapped the coyotes to send away and, in the process, also removed the depot’s badgers.

That was a problem for the burrowing owls, who do not dig their own burrows but rather borrow abandoned ones dug by other creatures — in this case, by badgers. Once there were no more badgers, their old holes began to crumble and disappear. By the time the depot’s environmental manager called Johnson in, there were only two or three nesting pairs left.

“It became a rescue mission,” he said.

Johnson began devising artificial burrows to lure the owls back. The first year of the project, there were nine pairs trying out the burrows. Then 21 the next year. Then 65. This year Johnson banded 177 new young owls who hatched on the depot this spring.

“That’s double the reproduction of last year,” he said. “It’s a really great year for the owls.”

Over time, Johnson and the helpers he brought in each spring perfected the artificial nests by building different options for the owls and observing which they chose. He found they didn’t like ones made with white plastic barrels, for example, but preferred blue or black.

To make the current nests, Johnson cuts in half blue 55-gallon plastic barrels donated by the Tree Top plant in Prosser, Washington, and buries them in the ground. Mesh underneath keeps the gophers out, sand provides a soft bed for the nest and a contraption using two buckets on the top provides a way for Johnson to check on the nests after they are buried 10 feet away from each nest the entrance of a 6-inch corrugated plastic pipe beckons, cave-like, from a pile of stones.

Once a nesting pair claims a burrow, the males bring the females soft items to line the inside of the nest, but they also decorate the outside of the burrow with corn cobs and other items they find.

“It says that this site is taken, and it’s taken by a tough guy, so don’t even think about it,” Johnson said.

Small tweaks to the burrows over time have helped more of the species survive. Johnson previously tested out 4-inch pipe for the tunnels down to the nests, but found fewer young survived in those nests because when a coyote attacked they would have to escape down the tunnel in single file, giving the predator enough time to pick off the last one.

During the winter, the birds abandon the nests. Johnson found the females fly south to California to fatten up in preparation for the weight they will lose while caring for their young, while the males fly up to Central Washington so that they can be close enough to compete for a prime burrow the next spring before the females return and pick the male they think will be the best provider.

He said if a male turns out to not be a good provider, his mate might sneak over to another burrow to get food from a male who is a better hunter while he is out.

“Their secret lives are complex and fascinating,” he said.

Each spring, when Johnson traps the owls, he checks on those he has placed bands on in the past and bands new owls, including babies and owls who have moved in from other territories. Sometimes, he finds the new birds had already been banded by other projects in Pasco or Yakima, Washington.

The nesting females and their babies are easier to capture, but Johnson had to find a clever way to trap the males after trying to lure them in with food bait didn’t work well. Now, he brings the males in with an MP3 player down inside a burrow that plays a recording of a young, underweight male.

“He’s a punk, a pesky intruder, and they’re not having it,” Johnson said. “They will strut back and forth, and when he doesn’t come out, they come in after him.”

Johnson is working with the National Guard on determining who might be able to do some maintenance on the artificial burrows after he stops coming in to inventory the burrowing owl population each spring, but he hopes to be able to reintroduce badgers to the area to return the ecosystem to a self-sustaining state.

He said based on badgers’ territorial and hunting needs, the depot could accommodate about 30 adults.

“There are a lot of pocket gophers here,” he said. “I’m sure the first badgers we bring in will eat like kings and queens.”

Editor's note: A previous version of this story erroneously stated that Johnson was working with the Columbia Development Authority on a plan for maintenance of the burrows. The East Oregonian regrets the error.