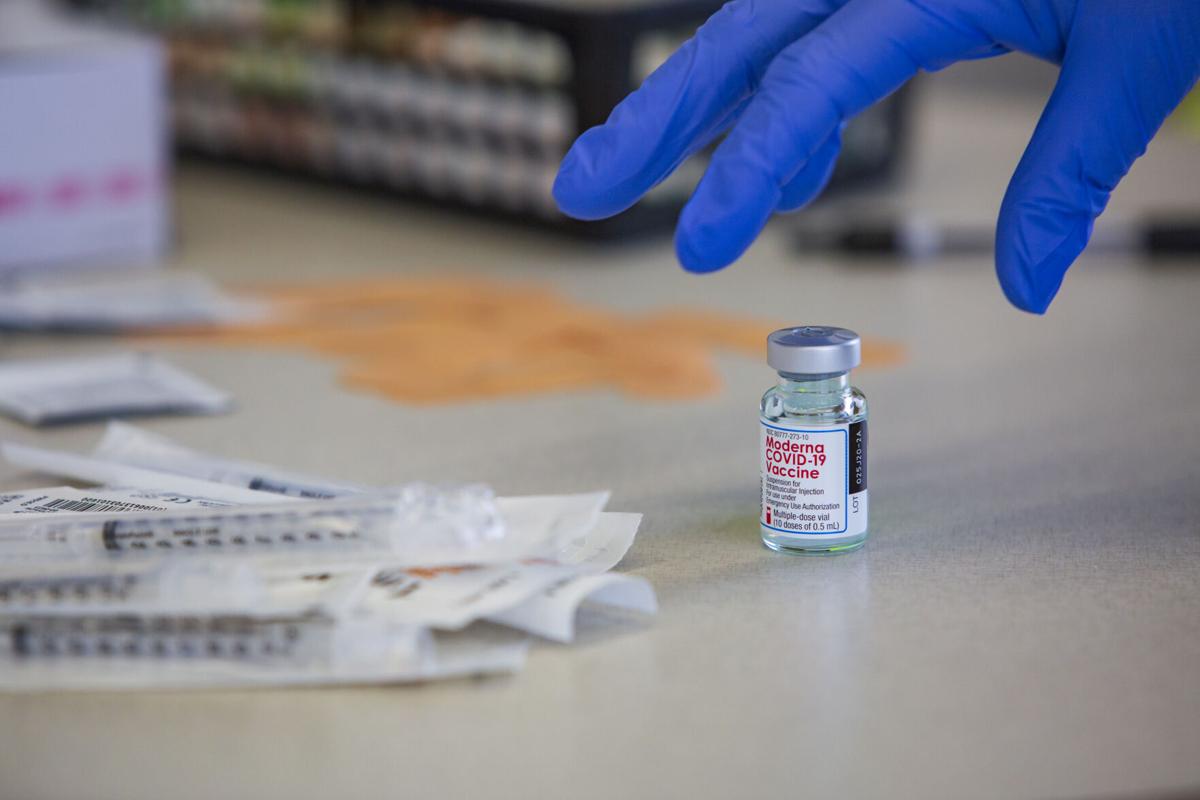 A nurse reaches for a vial of the Moderna COVID-19 vaccine during a vaccination clinic at St. Anthony Hospital on Dec. 28, 2020. 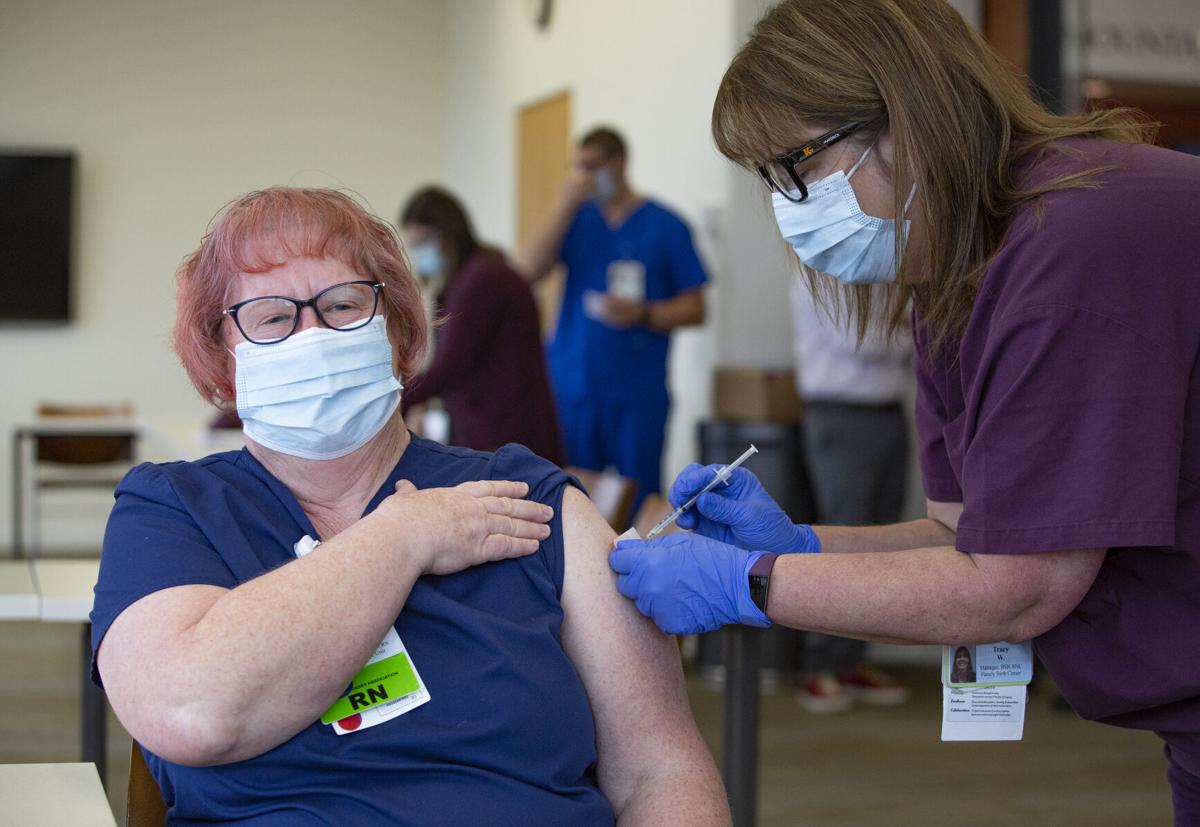 Galen Thompson, left, a registered nurse at St. Anthony Hospital in Pendleton, receives her initial dose of the Moderna COVID-19 vaccine from infection prevention nurse Tracy Wart at the hospital on Monday, Dec. 28, 2020.

A nurse reaches for a vial of the Moderna COVID-19 vaccine during a vaccination clinic at St. Anthony Hospital on Dec. 28, 2020.

Galen Thompson, left, a registered nurse at St. Anthony Hospital in Pendleton, receives her initial dose of the Moderna COVID-19 vaccine from infection prevention nurse Tracy Wart at the hospital on Monday, Dec. 28, 2020.

PENDLETON — As state health officials look to ramp up and broaden vaccination efforts across Oregon, Umatilla County officials are concerned that the efforts won’t be a cure-all for the already dwindling quantity of vaccines making their way to the arms of county residents.

The shift on the state level comes as Gov. Kate Brown announced on Tuesday, Jan. 12, that she will permit Oregonians older than 65 and childcare, preschool and K-12 school employees to start receiving the vaccine on Jan. 23 in an effort to speed up immunizations to 12,000 daily by Sunday, Jan. 17. The effort comes as state health officials endure mounting pressure due to the sluggish start to vaccination efforts.

Umatilla County Health Director Joe Fiumara and Umatilla County Commissioner George Murdock each said the county is seeing little indication of how these efforts will come to fruition in Umatilla County, and it is unclear what exactly is holding up further shipments of the vaccine.

Each said the county was intending to hold multiple weekly events to immunize hundreds of residents at a time, but for now, there are no assured vaccination efforts on the horizon.

“The people of Umatilla County are counting on us to give them accurate information about when we have vaccines available, where we’re able to vaccinate people, and how much we have to give,” Murdock said. “And we cannot get that information (from the Oregon Health Authority).”

Fiumara said he is confident the health department alone has the resources to immunize upward of 2,000 residents each week — if provided the supply. However, the county only recently received 100 additional doses on Jan. 12, he said.

“We started setting up staff with the intent that we were going to hold three (vaccine clinics) for three weeks, but it was on the condition that we would get the vaccine,” Fiumara said. “Since we didn’t, we obviously can’t hold those events.”

So far, Umatilla County has inoculated nearly 2,000 residents since the efforts began in late December 2020, which ranks 11th among counties in Oregon. Officials say the county has received around 2,700 doses.

Good Shepherd Medical Center in Hermiston has immunized 1,250 people out of the 1,500 doses they have received, according to a spokesperson from the hospital. However, the spokesperson said the hospital is unsure when the next shipment will arrive and how many doses they will receive.

Officials say that St. Anthony Hospital in Pendleton does not have any more doses of the vaccine.

Fiumara and Murdock say each time the county has received a shipment of vaccines, they have been pleasantly surprised that they have been able to use up the doses quickly, highlighting the two drive-thru clinics last week that brought the vaccine to nearly 600 residents. But when the event was over, the county had exhausted its supply of vaccine.

“There’s going to be folks in the county who don’t want the vaccine,” Fiumara said. “But, right now, the folks who want it — there’s a lot more than we have vaccines to give right now.”

Recently, the county obtained a freezer from Oregon State University capable of holding the Pfizer-BioNTech vaccine, which requires containment at temperatures close to that of Antarctica, according to officials. Fiumara said he has corresponded with state officials about the county’s desires to receive the Pfizer vaccine, which is distributed in 1,000-dose batches, but added the state seems somewhat reluctant to make shipments because of doubts the county could distribute all the vaccines quickly enough.

County officials say they are also hearing “rumblings” from some state health officials that OHA will be increasing its vaccine shipments to more densely populated centers, such as along the Interstate 5 corridor, but have yet to see confirmation in writing that this will happen.

Fiumara said that a week ago, he would have considered a lack of federal supply to be one of the main reasons why the state is distributing vaccines so slowly. But now, with the shifts and changes to accommodate the 12,000-dose benchmark, “it’s starting to look like maybe there’s more holdup within OHA than we thought,” he said.

“The feds have given way more (vaccines) than have been distributed out,” Fiumara said. “And the question becomes why. What is holding it up and what needs to change to fix that. And I don’t know those answers because we’re not having that same issue here.”

Murdock said by keeping the vaccine on the west side of the state, he believes the state is neglecting its commitment to focus on vaccinating groups disproportionately affected by COVID-19, noting that Umatilla County has a considerably diverse population.

The state’s changes come in response to a national shift as the Trump administration on Jan. 12 instructed states to begin immunizing every American over 65 years old, as well as tens of millions of people with health conditions that make them especially vulnerable to the virus.

Like the efforts in Oregon, that change also comes in response to pressure due to a slow start in vaccinations, as only 9 million people had received at least one dose of a COVID-19 vaccine by Monday Jan. 11, according to the Centers for Disease Control and Prevention — considerably less than what the federal government had originally promised.

The move comes just as the country’s death toll recently eclipsed another grim milestone, now with more than 4,000 Americans dying from the virus each day. More than 380,000 Americans have died from COVID-19 since the pandemic began, according to a New York Times database.

In Umatilla County, 64 residents have reportedly died from COVID-19. With 6,471 confirmed cases since the pandemic began, the county has reported 828 cases per 10,000 residents. That’s the second highest rate of infection among counties in Oregon, ranked only behind Malheur County, which has nearly 50,000 fewer residents and over 3,000 fewer cases.

“Schools are trying to get open, all these things are trying to happen, and a lot of folks want the vaccine as a pathway for this to open and we want to give it to them,” Fiumara said. “I think a lot of folks are under the impression that we have more information than we’re sharing, and honestly, we really don’t. We’re as frustrated as a lot of folks.”

Oregon Gov. Brown expands vaccinations to age 65 and up

SALEM — Gov. Kate Brown said after guidance from the Centers for Disease Control and Prevention on Tuesday, Jan. 12, Oregon will expand COVID-…