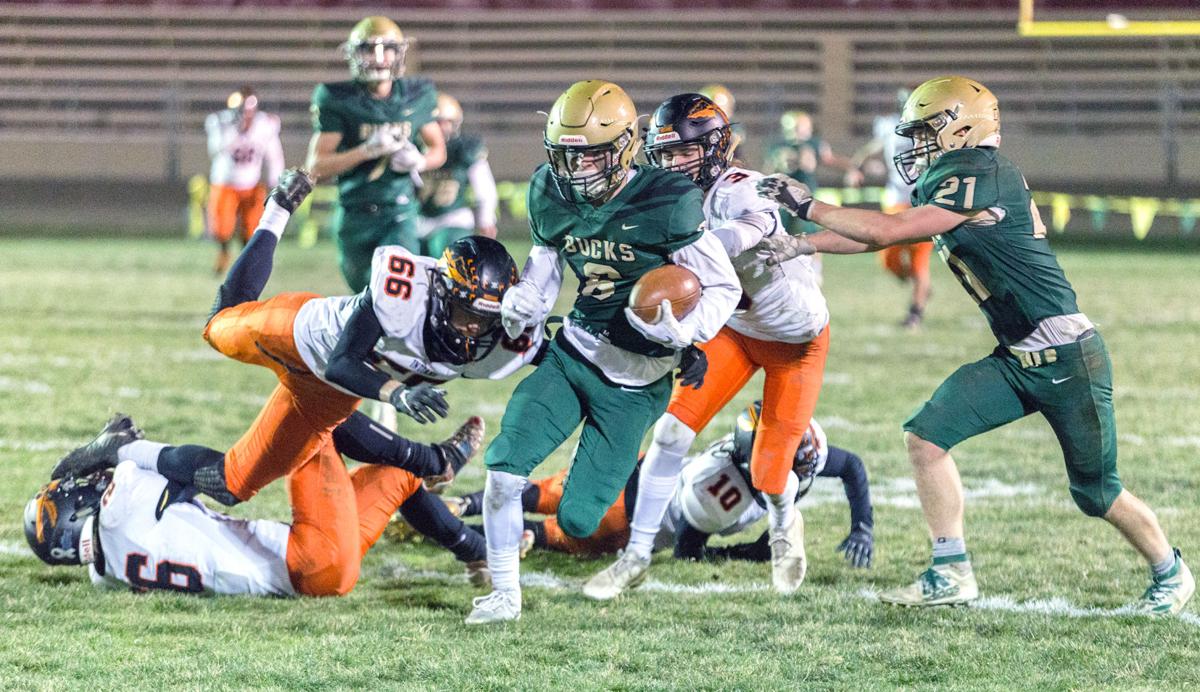 Ty Patrick (6), of Pendleton, evades tacklers during a Nov. 1, 2019, nonleague rematch against the Scappoose Indians. 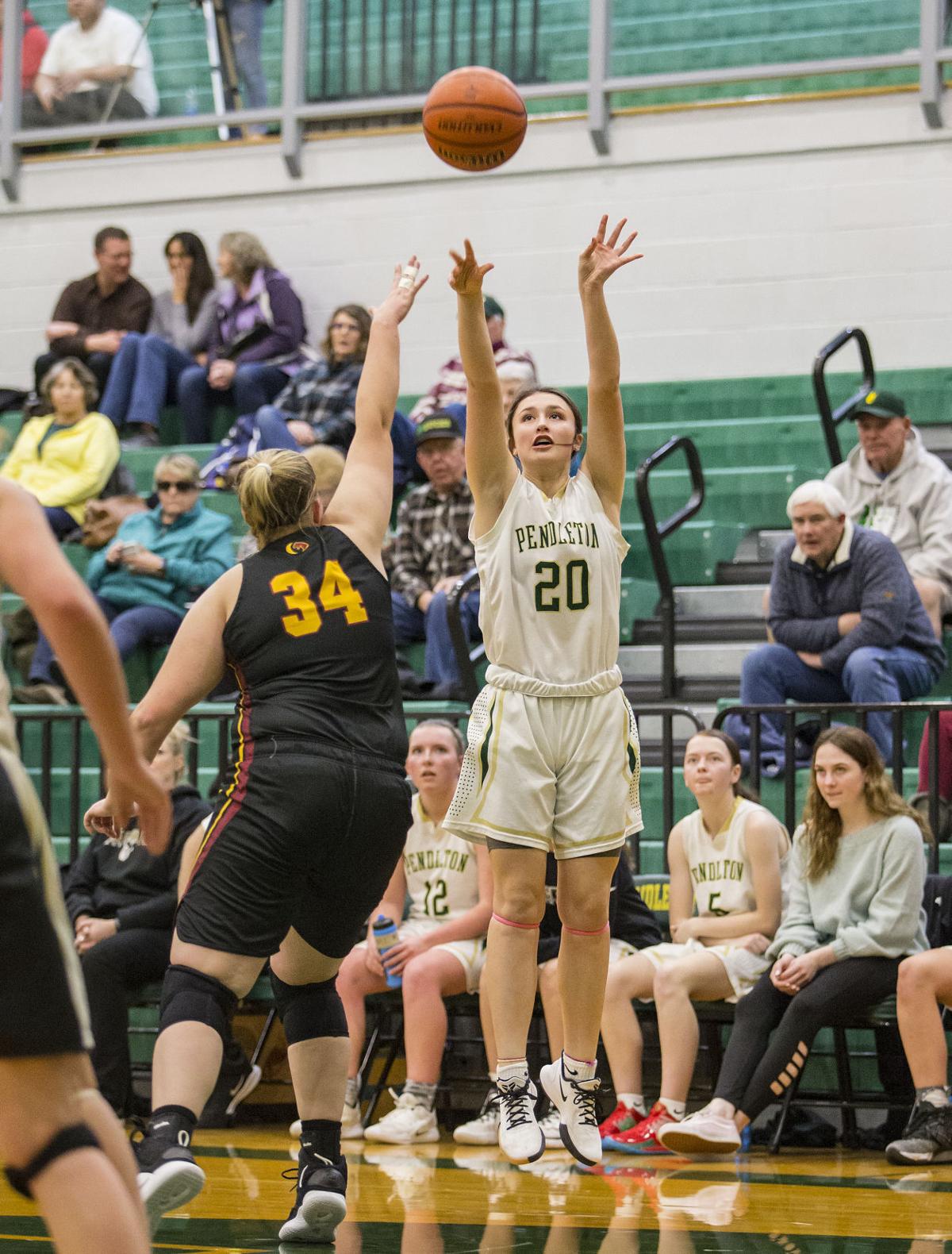 Pendleton’s Chloe Taber (20) puts up a shot against the Panthers. The Pendleton Buckaroos defeated the Redmond Panthers 74-25 at Pendleton High School on Feb. 4, 2020. 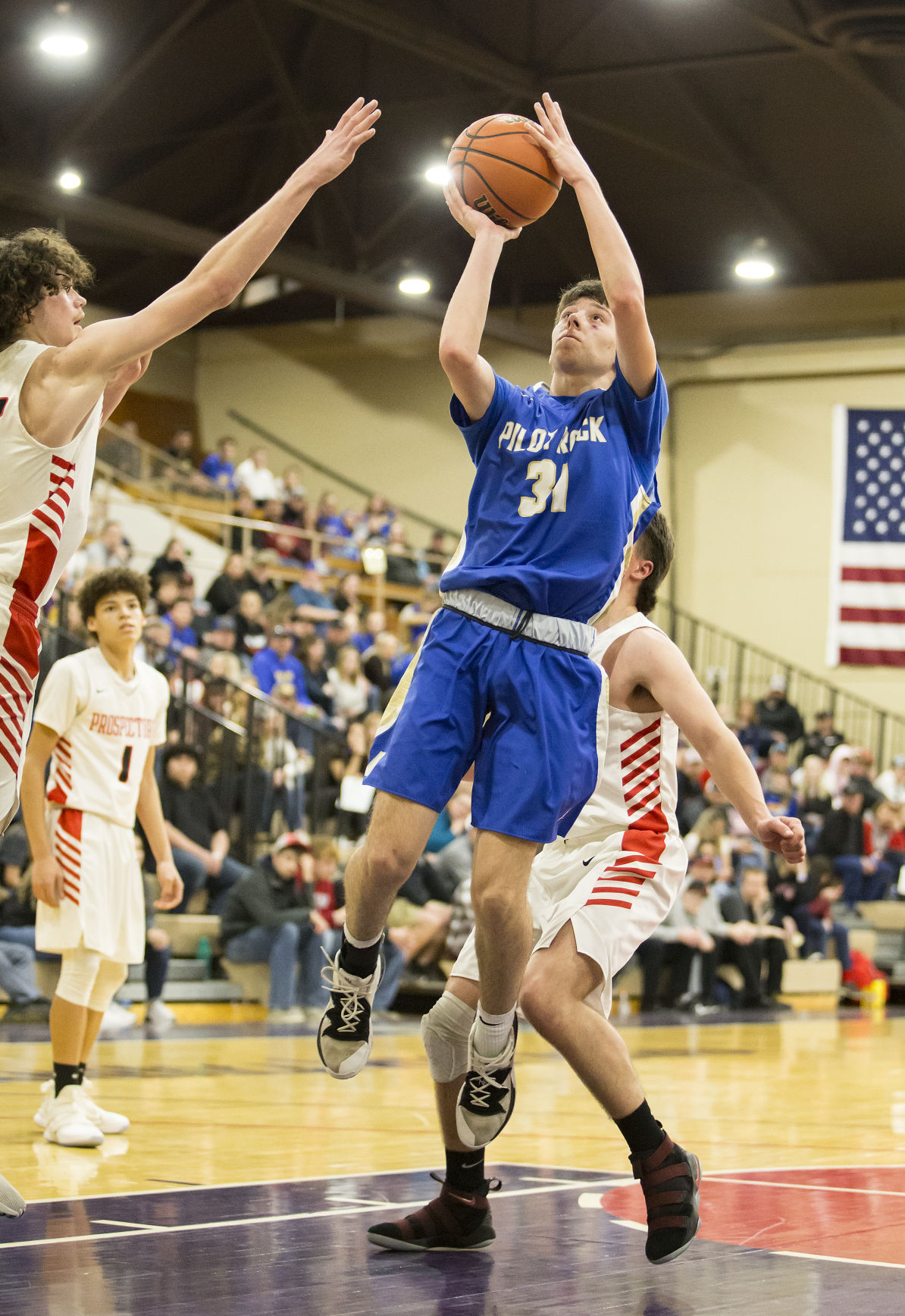 Pilot Rock’s Tel Thacker (31) leaps to take a shot during the second half against Grant Union. The Rockets defeated the Prospectors 68-40 at the Pendleton Convention Center on Saturday, Feb 22, 2020 to win the Blue Mountain Conference district tournament title. 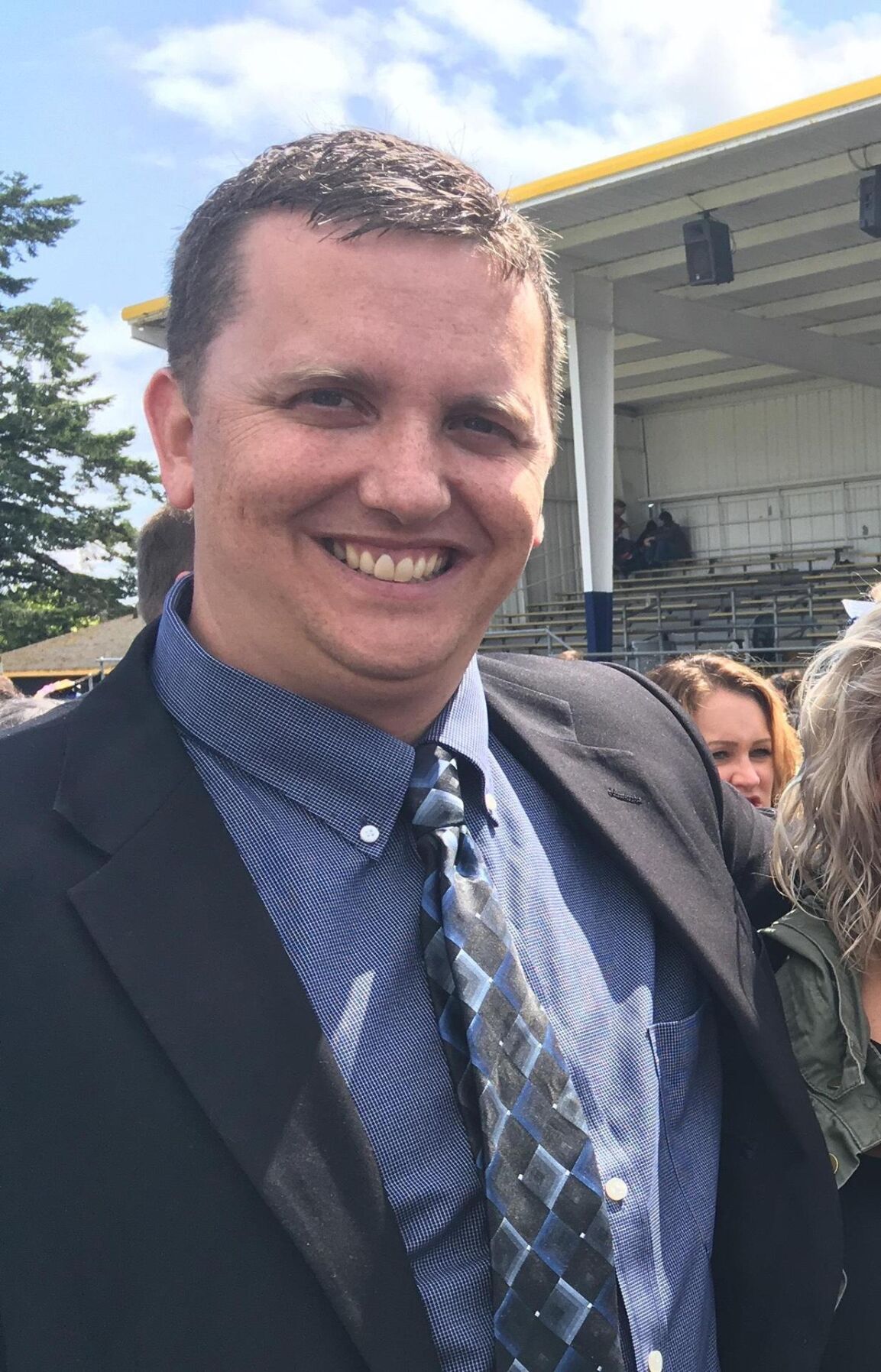 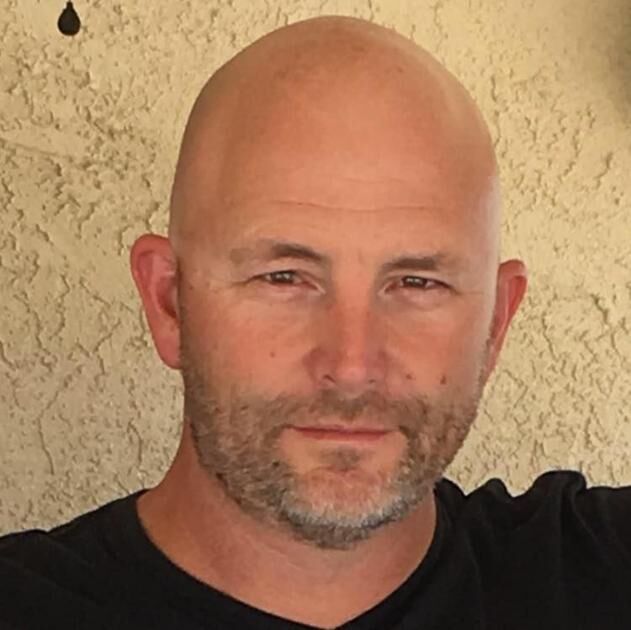 Ty Patrick (6), of Pendleton, evades tacklers during a Nov. 1, 2019, nonleague rematch against the Scappoose Indians.

Pendleton’s Chloe Taber (20) puts up a shot against the Panthers. The Pendleton Buckaroos defeated the Redmond Panthers 74-25 at Pendleton High School on Feb. 4, 2020.

Pilot Rock’s Tel Thacker (31) leaps to take a shot during the second half against Grant Union. The Rockets defeated the Prospectors 68-40 at the Pendleton Convention Center on Saturday, Feb 22, 2020 to win the Blue Mountain Conference district tournament title.

PENDLETON — After keeping the gym doors closed the last few weeks due to the “freeze” issued by Gov. Kate Brown and the Oregon Health Authority, the Oregon School Activities Association met virtually to discuss the future of high school athletics amid the COVID-19 pandemic.

For the first time in a while, athletic directors were able to get something they haven’t had for a while.

Due to the recent spike of COVID-19 cases in communities around the state, the initial start date for the winter sports season on Dec. 28 seemed to be too dangerous. So when it was announced on Monday, Dec. 7, that the start of sports was going to be pushed back, that didn’t come as a complete surprise to Pendleton High Athletic Director Mike Somnis.

“It was expected, we weren’t sure what it was going to look like or what form it would take but we figured it would be delayed for a period of time,” Somnis said. “It was no surprise, it had to happen with the metrics and where they are at right now according to OHA, it just doesn’t line up to play indoor sports at the moment.”

Now with the winter sports season, or Season 2, being delayed, high school sports is set to begin with football practice as early as Feb. 8, 2021. Baker High Athletic Director Buell Gonzales Jr. sees the benefit of more time to pass for things to become safe.

“The middle of February is a good time, that gives us the things we’ve been hearing, the vaccine and stuff like that, time to happen or to take place,” he said.

After the decision to delay the start of high school sports was made, the board considered two proposals — one for two, nine-week seasons that each had a culminating week, and the adopted proposal of three, six-week seasons.

For La Grande Athletic Director Darren Goodman, having multi-sport athletes in his program would prove that this proposal would be a conflict of interest.

“We have a lot of teams that share athletes so I think that it’s important that the athletes aren’t made to choose and have their freedom to do both,” he said.

“I was glad to hear that they were not overlapping any sports just because at the Class 4A level, we share a lot of athletes so that was a positive thing,” he said.

The proposal that eventually was passed ended up shortening each of the three seasons to six weeks, moving winter sports to the end of the school year, playing between May and June. Though the transition will be interesting, Somnis sees that this can work.

“At this point of the year, with the idea of buying more time for cases to drop or a vaccine to take hold, it’s the best outcome of the moment,” he said. “I’m not sure you can condense the seasons even more.”

Goodman is ready to do whatever they can to make the adjustment and get the most out of it.

“It is what it is, we are going to work with it the best way we can and get the best schedules we can and roll with it,” he said.

What remains uncertain is sports that have contact. Not only are winter sports like wrestling and basketball not able to compete, football is still in question as well. It makes someone like Gonzales Jr. wonder how that is going to get addressed in the future when organized sports once again get closer.

“There has been no indication either way about contact sports, so we will see how that goes,” Gonzales Jr. said.

Now that the start of sports has been pushed back to at least early 2021, athletic directors are steadfast in providing opportunities for their student-athletes to be active. Although being indoors is off the table, organized conditioning is still taking place on some school grounds, as long as masks are on at all times.

“Still giving our kids opportunities and outlets to get out of the house and do something productive and positive,” Somis said. “That is our No. 1 priority.”

Knowing that weather does play a factor, Goodman intends to have his coaches keep in contact with their athletes to give them instruction to be active when they are home.

“We are going to try and encourage coaches to make contact with athletes, stay involved and maybe give some homework out for kids to do at home,” he said. “Weather permitting, we can still do some things outside, if (weather) cooperates and lets us do some things.”