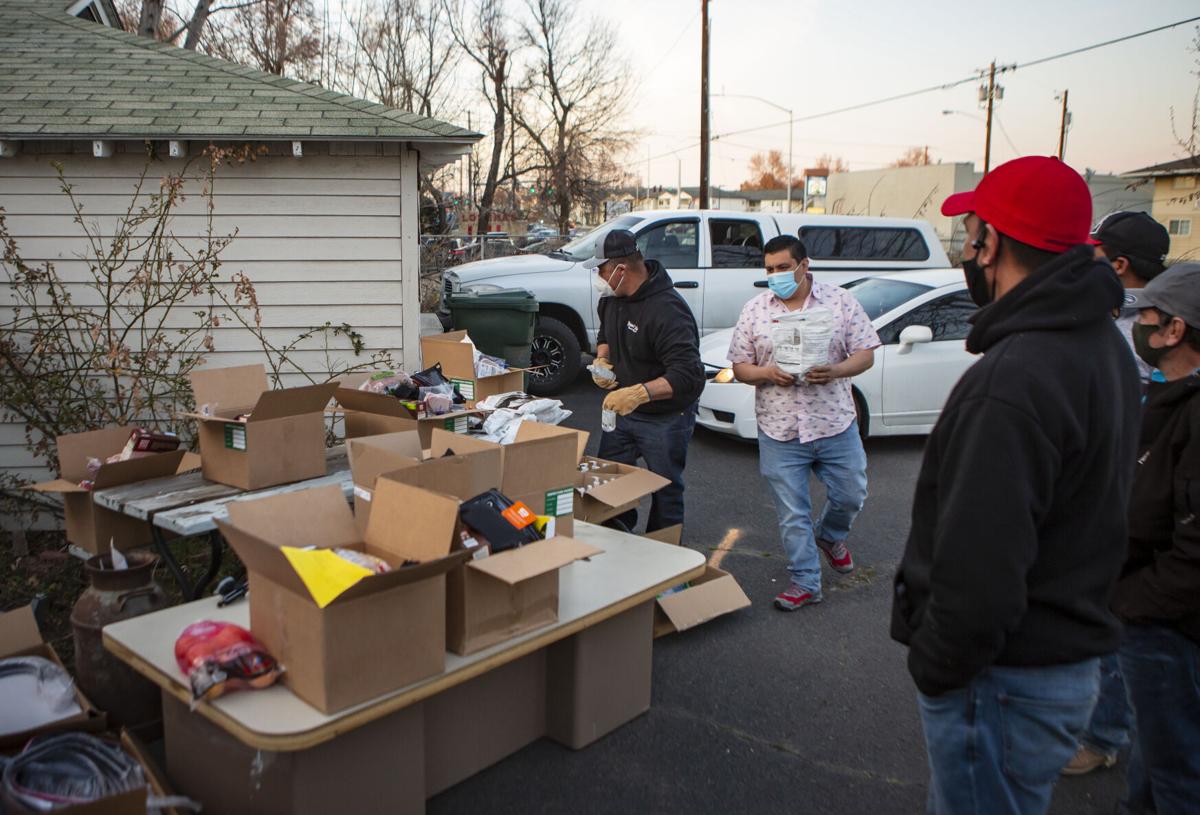 Jose Garcia, left, and Rafael Romero, center, gather masks and hand sanitizer for a group of farmworkers at New Horizons in Hermiston on Friday, March 19, 2021. 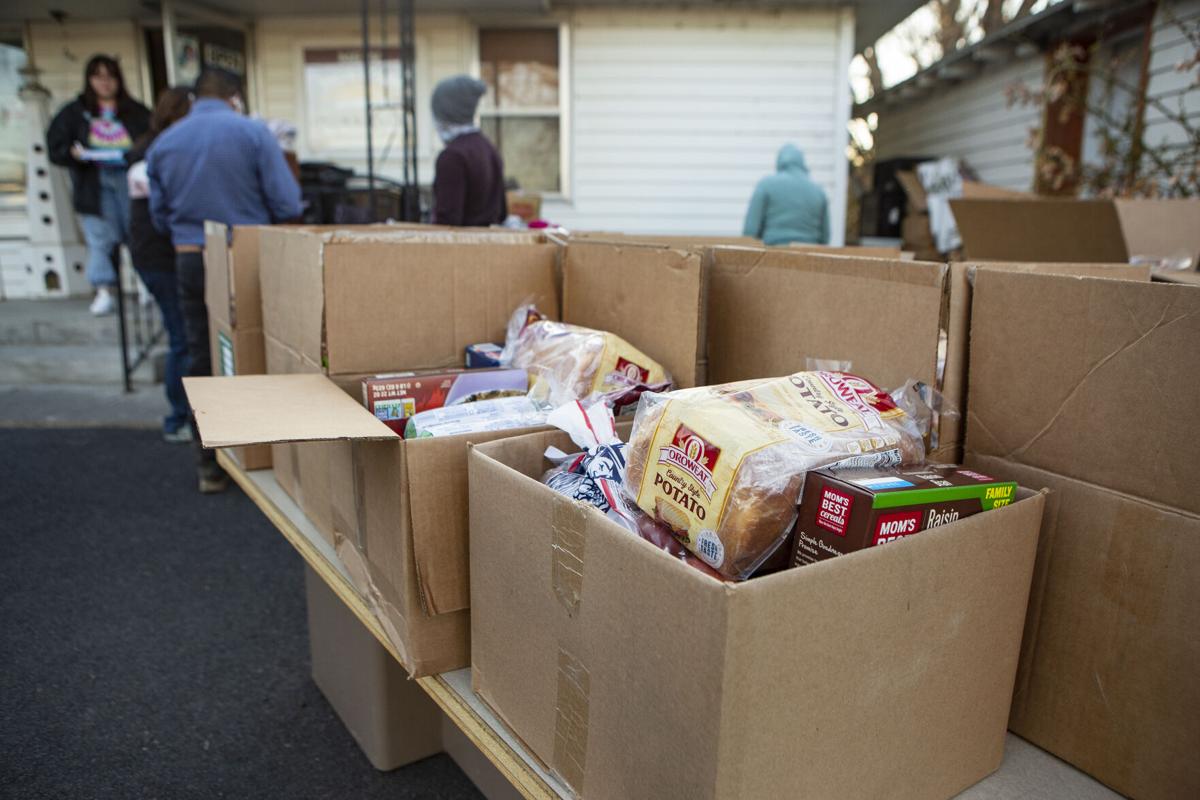 Food boxes line a table at New Horizons in Hermiston during an aid distribution for farmworkers on Friday, March 12, 2021. 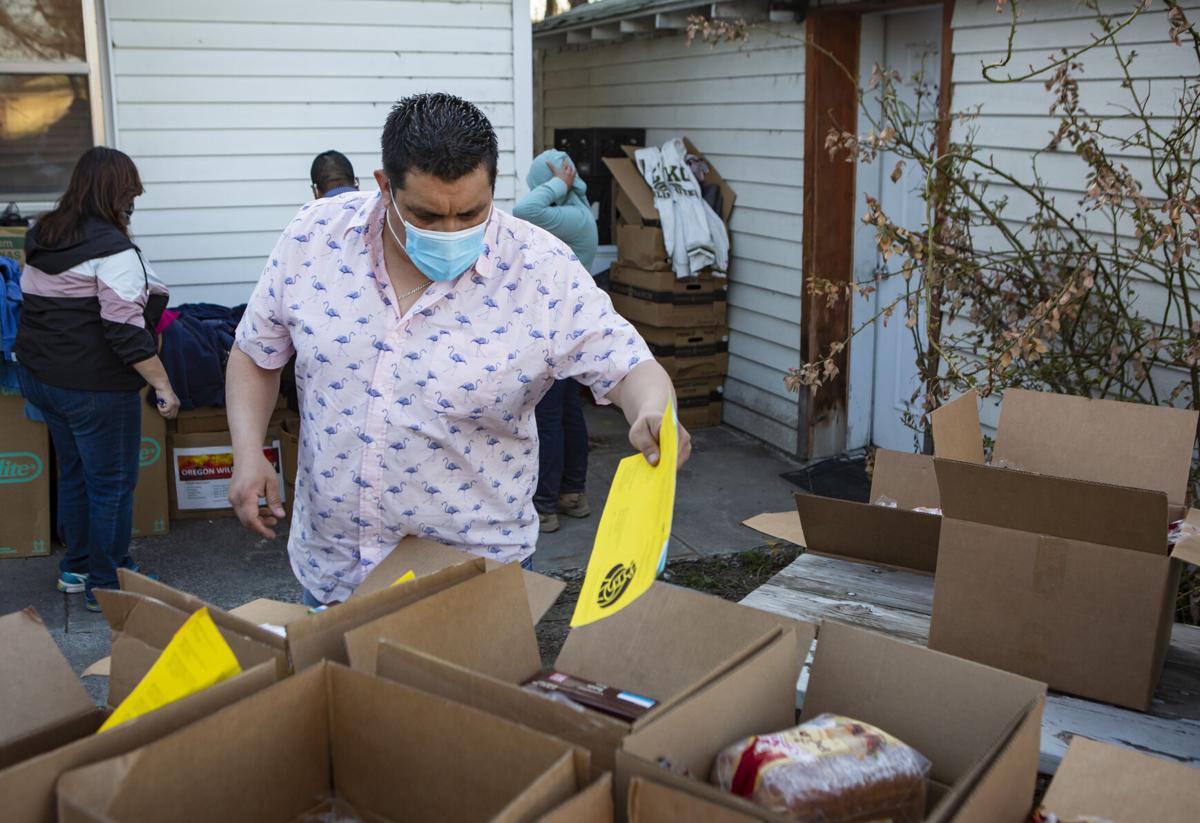 Rafael Romero inserts lists of COVID-19 and workplace safety information into packages of food for farmworkers at New Horizons in Hermiston on Friday, March 12, 2021. 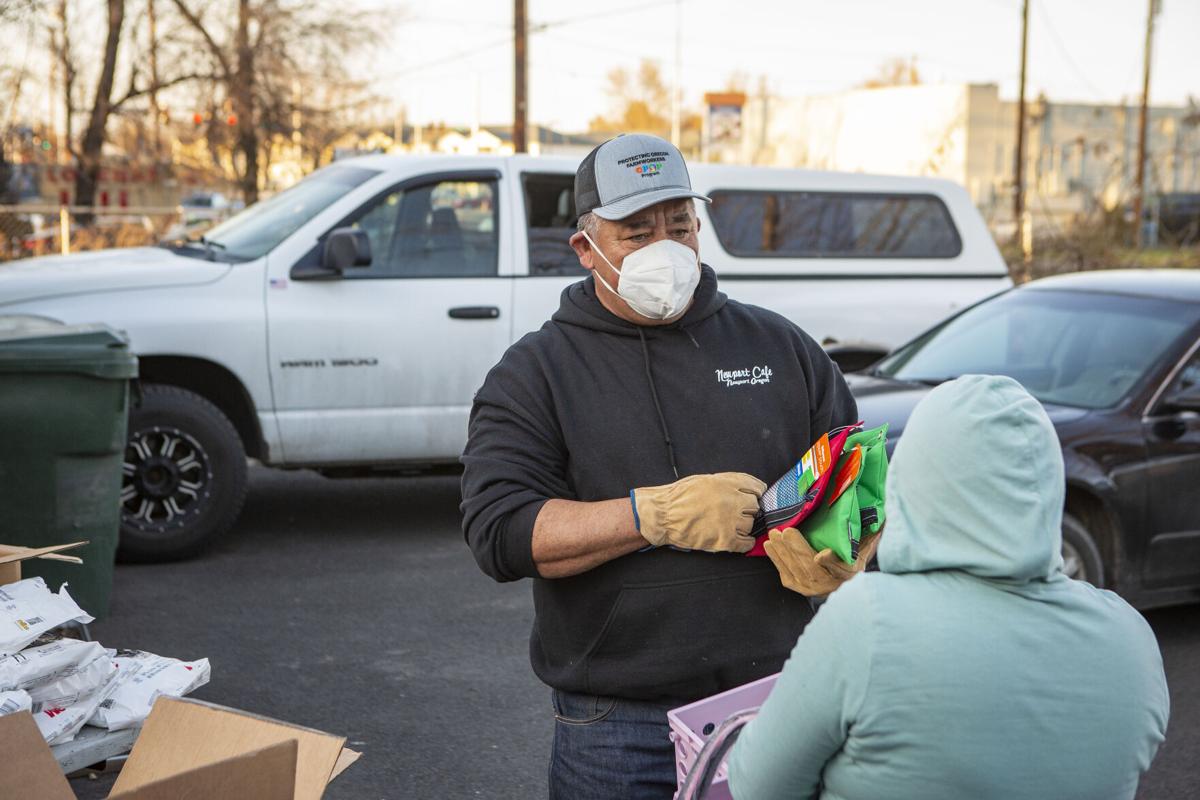 Jose Garcia hands out kits with hand sanitizer and masks to farmworkers at New Horizons, a nonprofit rehabilitation organization in Hermiston, on Friday, March 12, 2021.

Jose Garcia, left, and Rafael Romero, center, gather masks and hand sanitizer for a group of farmworkers at New Horizons in Hermiston on Friday, March 19, 2021.

Food boxes line a table at New Horizons in Hermiston during an aid distribution for farmworkers on Friday, March 12, 2021.

Rafael Romero inserts lists of COVID-19 and workplace safety information into packages of food for farmworkers at New Horizons in Hermiston on Friday, March 12, 2021.

Jose Garcia hands out kits with hand sanitizer and masks to farmworkers at New Horizons, a nonprofit rehabilitation organization in Hermiston, on Friday, March 12, 2021.

HERMISTON — Wences Dominguez makes a little more than $400 each week pruning grapes in the sprawling fields around Hermiston — $350 of which he gives to his family.

He sends about $300 to his mother, wife and sons back home in Michoacán, Mexico, where he’s been coming to and from for the past 23 years, while searching for a better future. In his first years working in the United States, he used all the money he made to build his family’s home.

The remaining $50 he gives to his daughter. Before he came to Hermiston over two years ago, he hadn’t seen her for seven years. He couldn’t get a green card, he said.

“I felt very happy,” he said of the first time he saw her again.

She has two daughters, and when the pandemic began to spread through nearby agricultural areas in the summer, they were the reason he worked hard to protect himself from COVID-19.

“Always I take care,” he said through a translator. “Always I have my mask. For my kids.”

Dominguez and more than two dozen other migrant farmworkers recently arrived at New Horizons, a nonprofit rehabilitation organization in Hermiston. That day, however, the facility grounds served a different purpose — to provide food, clothing and personal protective equipment to the workers.

“There’s no words to describe this,” Jose Garcia, chair of the Hispanic Advisory Committee in Hermiston, said as he looked out at the gathering workers.

In June 2020, Garcia recognized that because of the pandemic, farmworkers could not come get supplies from the Agape House, a local nonprofit food bank. So, he began working with the Agape House to reach out to the thousands of local Hispanic and Latino agricultural workers.

The workers carried boxes of bread, Raisin Bran, beans, rice, vacuum-sealed meats and fruits and vegetables to their cars. Dust from the work day still clung to their boots and jeans. Some brought their children, who played with belts, shirts and pants spilling out of stacked cardboard boxes, while parents checked sizes, laughed and chatted together. Nearly all came from Guatemala or Mexico.

Garcia, an addiction counselor at New Horizons, estimates between 20 to 30 families come by when supplies are offered at New Horizons every two weeks. Workers are also provided with personal protective equipment supplied by the county health department.

It’s an effort to help a community that has been disproportionately impacted by the COVID-19 pandemic, Garcia says. In 2020, residents reporting Hispanic ethnicity accounted for 41% of Umatilla County’s total COVID-19 cases. The population also contracted the virus at a rate over three times higher than non-Hispanics, according to data from the county health department

And Hermiston was hit hardest. The ZIP code encompassing the town reported more COVID-19 cases than any other in the county in 2020. Most of those cases came in the summer, when the area reported one of the highest testing positivity rates in Oregon.

Residents reporting Hispanic ethnicity had the greatest number of Umatilla County’s cases in every month from April through August 2020. In July, the population tested positive at a rate nearly four-and-a-half times higher than non-Hispanics.

Health officials have said that the bulk of the cases during the summer months were being traced back to agricultural workplaces and food processing facilities, where infection has been known to spread rapidly and Oregon Health Authority frequently reported large outbreaks.

Researchers nationally have pointed to socioeconomic status and workplace exposures as having contributed to the pandemic’s disproportionate impact on Hispanic and Latino communities.

Gov. Kate Brown announced in a Friday, March 22, press conference that migrant and seasonal farmworkers would be eligible to start receiving the COVID-19 vaccine starting March 22, speeding up the state’s timeline as more groups of essential workers become eligible in the coming weeks. The move comes in response to the disparate affect the pandemic has had on essential workers in marginalized communities.

Officials at the Umatilla County health department have started contacting agricultural and food processing facilities to make plans for bringing the vaccine to these communities starting next week, according to Joe Fiumara, the county’s public health director.

And although infection rates have declined overall in the county, the pandemic has yet to fully abate from some agricultural areas.

Valentin Alonzo, who came to Hermiston from Guatemala nearly five years ago with his wife and three kids, said that five of his co-workers contracted the virus less than a month ago. Although Alonzo recognizes the severity of the virus, and the impact it’s had on local farmworkers, he said he is not worried.

“There is a passage in the Bible that says, if you come to me, don’t fear, because I will protect you from anything,” he said through a translator.

Garcia watched some of the last boxes of supplies be carried away, counting how many were once sitting on the tables. He uttered a phrase that would summarize the day.