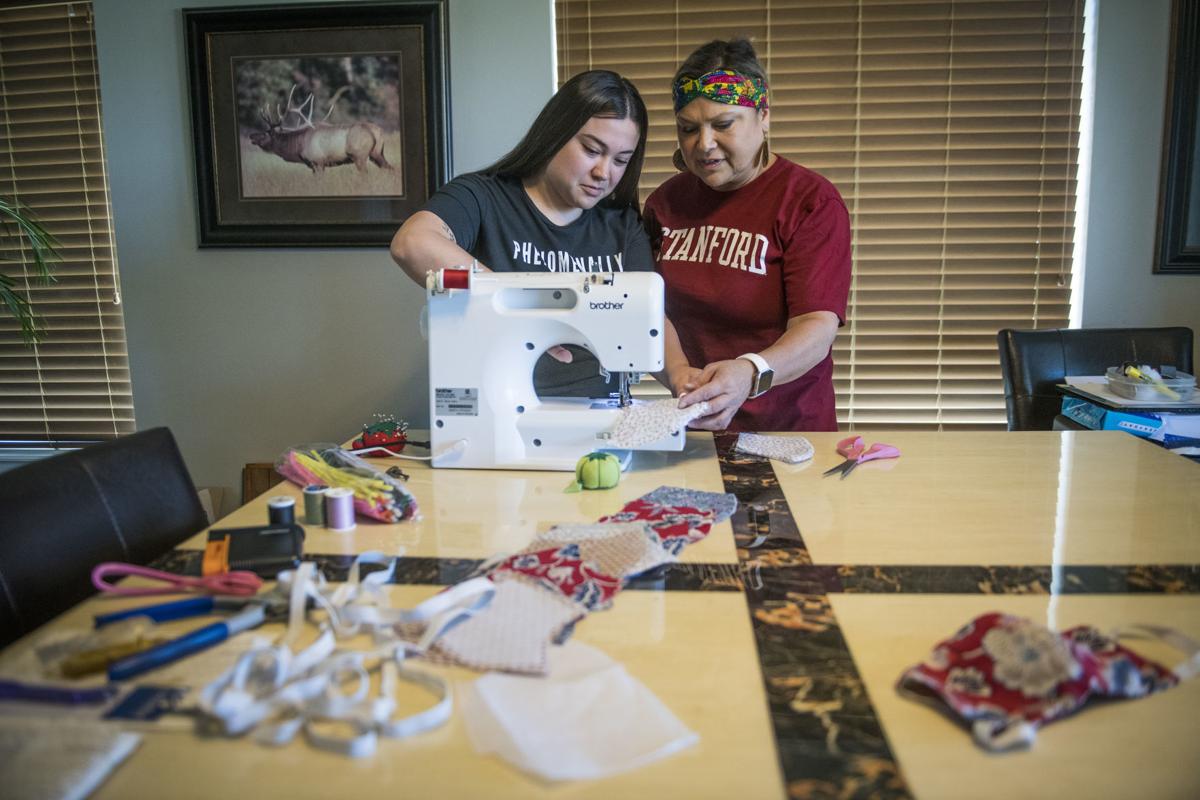 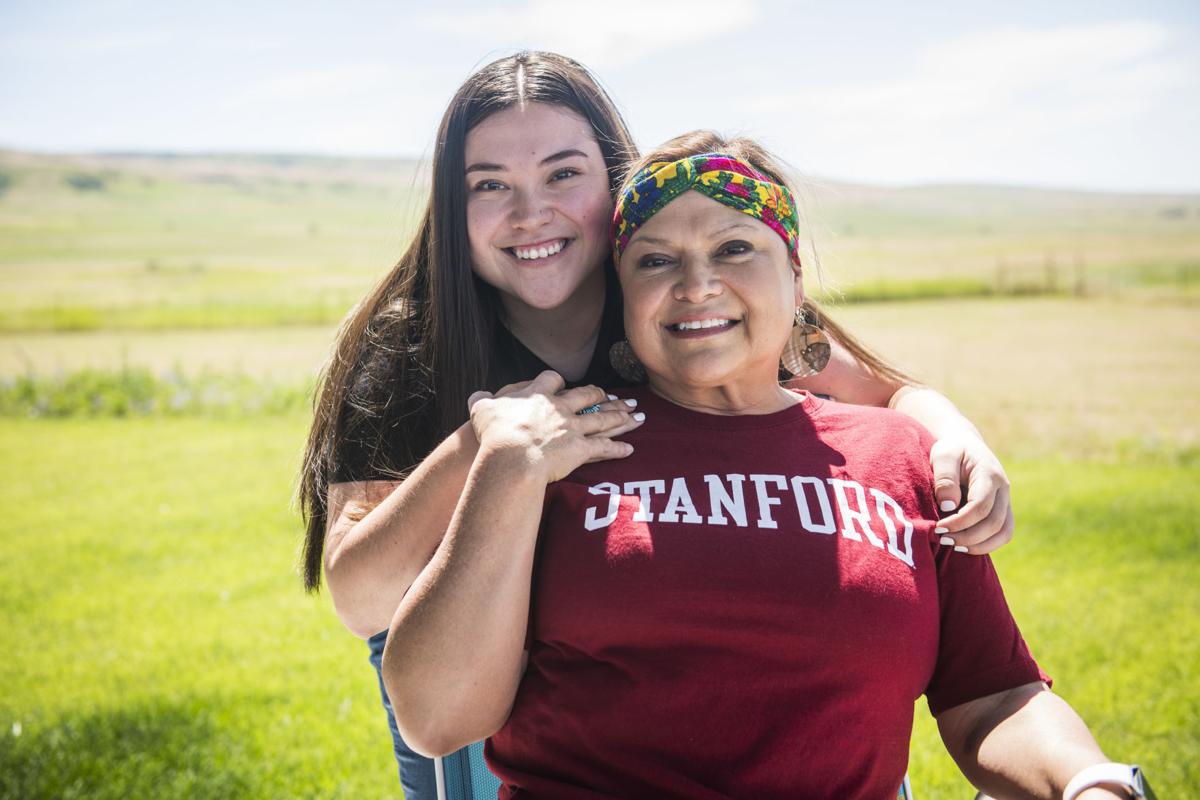 MISSION — Like at most colleges, Stanford University’s 2020 commencement ceremony was canceled, thanks to the COVID-19 pandemic.

And like many college graduates this spring, Alyssa Farrow took to social media to make the announcement that would have been done on her behalf by Stanford’s administration.

“I graduated college today. First-generation, low-income, and first from my tribe to graduate from Stanford. Wild,” Farrow tweeted.

The young woman who lives on the Confederated Tribes of the Umatilla Indian Reservation had no idea her message would grab the attention of the Twitter universe.

“I was way more than blown away,” Farrow said last week.

Farrow, 21, earned her bachelor’s degree in psychology with a focus on health and development from the renowned California college. The plan is to next attend Oregon Science and Health University’s two-year master’s degree program in public health.

From there, Farrow expects to land right back where she started, on the Native American reservation in Mission, where about half of the Confederated Tribes’ 3,100 members live on 273 square miles.

Every step she’s taken so far has been with that destination and her people in mind, Farrow said.

The seed of healing was planted when she was a child.

“My parents always taught me to be ambitious. I knew I wanted to grow up to be something more than what was around me.”

What she saw, the young woman recalled, were mental and physical health problems that seem to plague some residents of the reservation.

When Farrow was in middle school her mom, Alanna Nanegos, was diagnosed with stage 4 breast cancer at the age of 41.

“The situation was a lot worse than we thought it was,” Farrow said, and soon the 11-year-old was attending appointments with Nanegos in Walla Walla, Washington, and in Portland.

That’s when the medical field and its professionals caught her attention, she said.

In high school, the vision of her future came into sharper focus, Farrow said.

That came from two factors — one, the drive to pursue medicine just didn’t blossom as Farrow had anticipated, and two, a realization there is no place for surgical skills at Yellowhawk Tribal Health Center on the reservation.

There was no question that’s where Farrow wants to be — at home, with her tribe and its medical needs.

Farrow, who’s of the Cayuse and Umatilla tribes, had a choice to attend the smaller Nixyaawii Community School in Mission rather than attending Pendleton High or Weston-McEwen High schools with more advanced classes and resources.

Those, she said, were not what was important to her. The tribal school, with its traditional language, history and art classes, mattered more.

“Ultimately, I want to be with my people. I got a lot of strength and determination from going to that school,” Farrow said.

Still, a younger Farrow recognized she was living in a smaller world. Her parents had not gone to college, but stayed close to home and worked for the tribe.

According to the Confederated Tribes, the day-to-day governance work employs about 500 people; Wildhorse Casino & Resort has a staff of about 800 in normal circumstances; and 300-some people work at Cayuse Technologies.

Farrow, too, wanted to work for her nation, but only after first experiencing life off the reservation and outside the Pacific Northwest, she said.

Farrow was already a senior in high school when a family friend told Nanegos about Stanford University northwest of San Jose.

“And my mom said ‘That’s it, we’re driving down there, we’re taking a tour, we’re talking to financial aid.’ And I immediately fell in love with the campus.”

Farrow applied at the end of January 2016, late in the college application season. One of the essays she submitted, however, was timeless.

The girl from the reservation wrote about how fortunate she’d been to attend the tiny community school there and what those four years meant to Farrow’s understanding and appreciation of the Native American legacy into which she was born.

Once Farrow landed at Stanford she was active in the Native American community there, including serving on the Stanford Powwow committee and as a peer health educator. She is now working for College Horizons, a nonprofit established 22 years ago to increase the number and success of Native students in higher education.

With completion of that future public health degree, Farrow plans to dive into the issues she’s seen since childhood — poverty, diabetes and addictions, among them.

“I saw those in my own neighborhood, I saw it in my own family, my friends’ parents,” she said.

“I wanted to break that cycle so my children don’t have to live this way.”

Farrow blames colonization on many of the social ills she sees.

The Cayuse tribe has been set inside a reservation since 1855, when tribal leaders ceded most of their traditional territory to the United States by treaty, and their people moved to the Umatilla Reservation.

According to Historylink.org, Washington’s online encyclopedia of state history, the Cayuse Indians were once “masters of a vast homeland of more than 6 million acres in what is now Washington and Oregon.”

The Cayuse were the first of the Northwest tribes to acquire horses and, while a small tribe, were known for their shrewd bargaining ability and were feared warriors. The tribe was at the peak of its power in 1836 when Marcus and Narcissa Whitman were invited to establish a mission on Cayuse land near Walla Walla.

The gesture did not end well, said Cassandra Tate in writing for Historylink.

“What began as accommodation ended in disillusionment and resentment. A group of Cayuse attacked the mission in November 1847, killing the Whitmans and 11 others — a brief flurry of violence that led to the first Indian war in the Northwest, the creation of Oregon Territory as a federal entity and, eventually, a treaty that stripped the tribe of most of its land.”

The Cayuse and its culture survive as part of the Confederated Tribes of the Umatilla, with a 172,000-acre reservation near Pendleton, Tate wrote.

People are not just complacent in the arrangement, but fear encountering racism outside the reservation, Farrow believes.

“This is what our parents know, our great-grandparents, all our ancestors have known … Why would we leave that? It’s our culture and our traditions, it’s hard to balance that with leaving. This is like a safe haven,” she said.

“But how are we going to become better without changing ourselves and aiding our tribe?”

It is possible to experience a broader world and come back to help this community, Farrow said.

Oregon Health & Science University has a Native-focus program within its School of Public Health, which she’s counting on to help guide that path, Farrow said.

“At Yellowhawk there is a community health department and they do a lot of everything,” she said, listing maternal, mental and family health — all practiced by weaving in the traditions of the patients served.

“In our culture nothing is separate, everything is working together. You have to be very holistic.”

Farrow continues to hear from her new Twitter fans about that graduation tweet of June 14, including a response and retweet from Oregon Gov. Kate Brown.

“It’s been a lot,” the graduate said with a slight laugh.

“I’ve gotten a lot of replies and messages, saying this is the positivity the world needs to see right now.”

The reaction is heartwarming, especially hearing that her success is inspiring to others, Farrow said.

“But I never wanted to be the hero on someone’s timeline,” she said.

It will be enough to be a good public health provider right where her heart is, Farrow said.