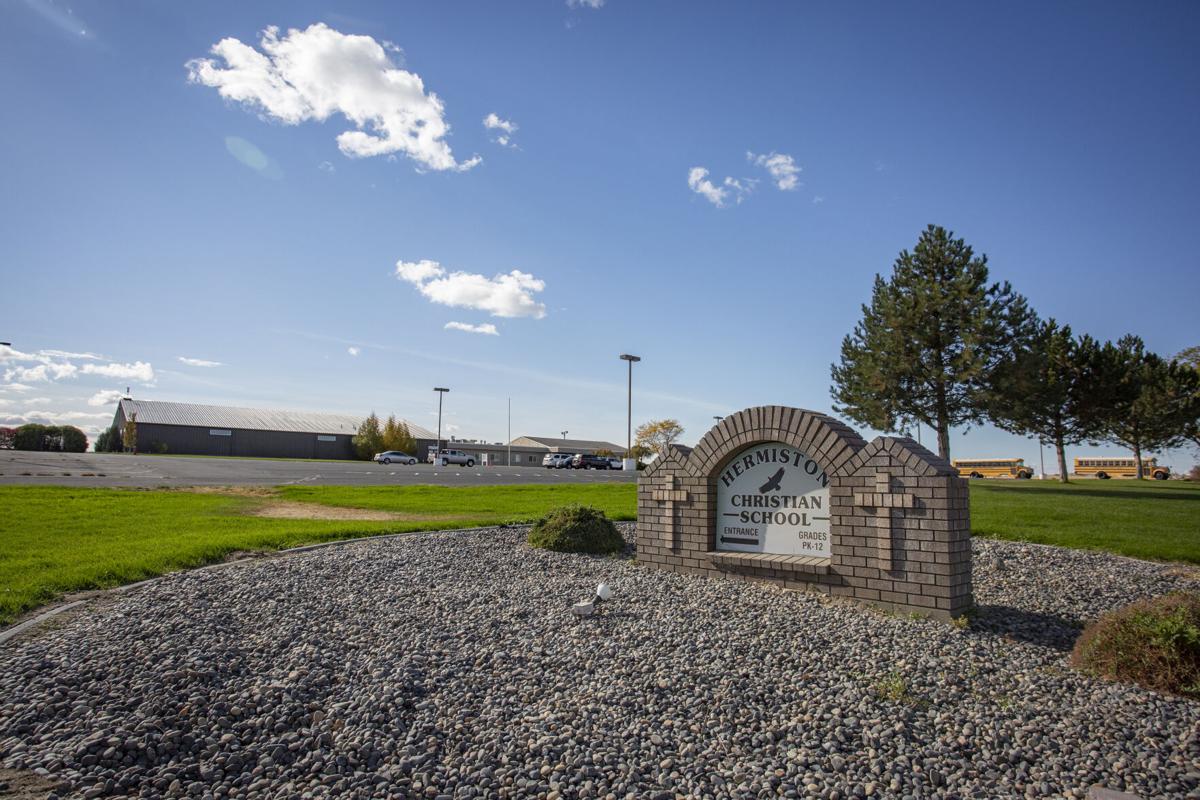 The Hermiston Christian School has filed suit against Gov. Kate Brown and several other parties challenging the governor’s restrictions on in-person education. 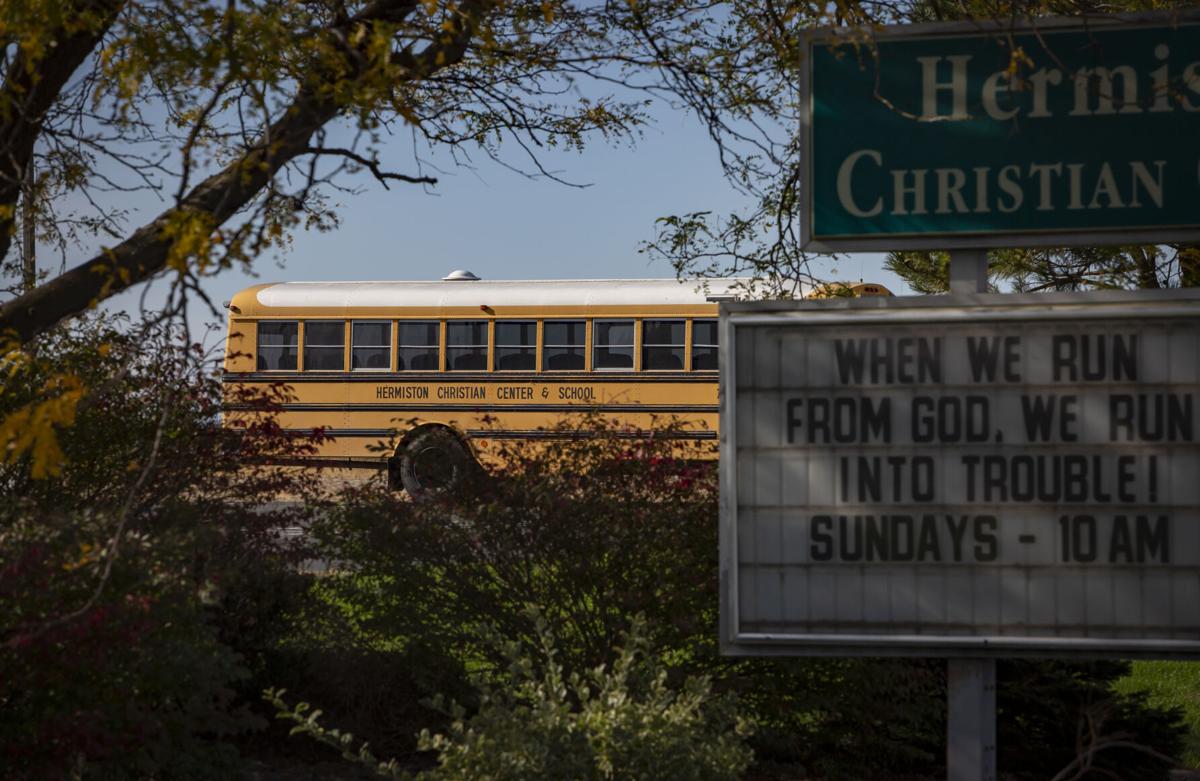 A school bus sitting in the parking lot of the Hermiston Christian School is bathed in sunlight on Wednesday, Oct. 21, 2020. 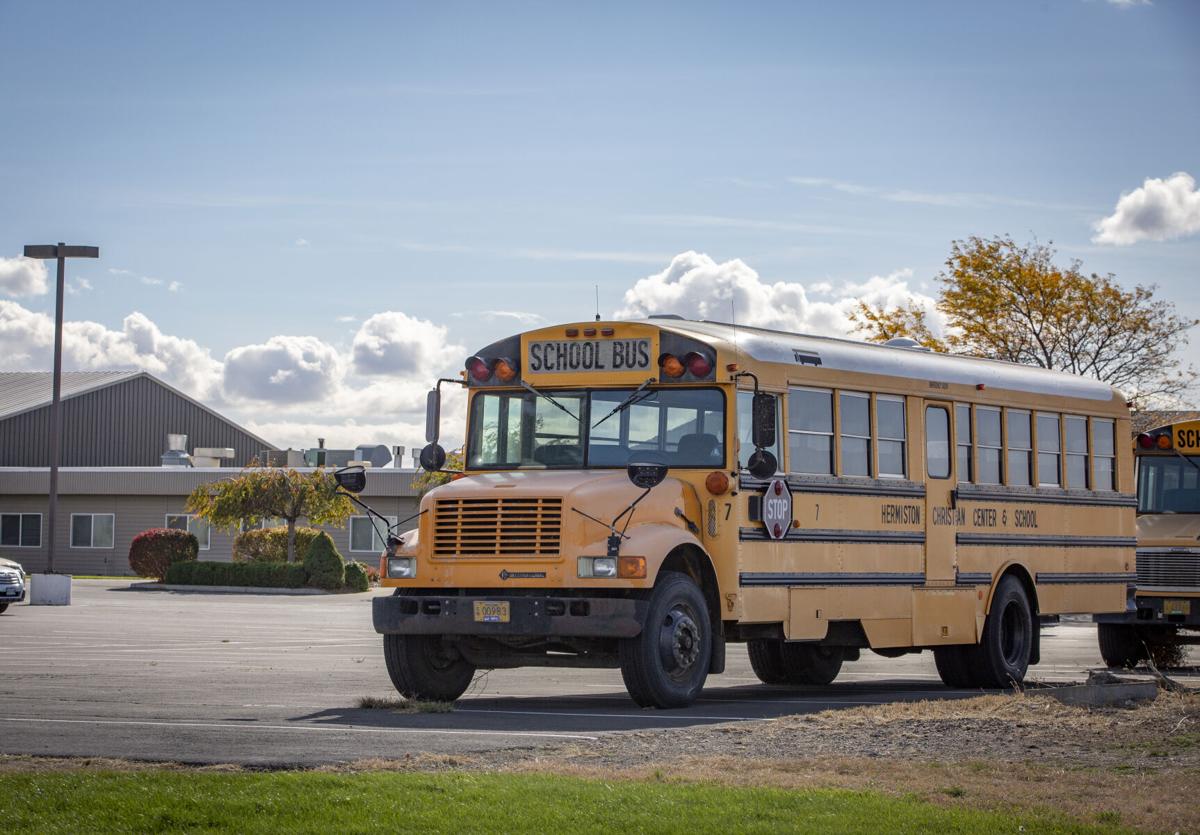 A school bus sits in the parking lot of the Hermiston Christian School on Wednesday, Oct. 21, 2020. 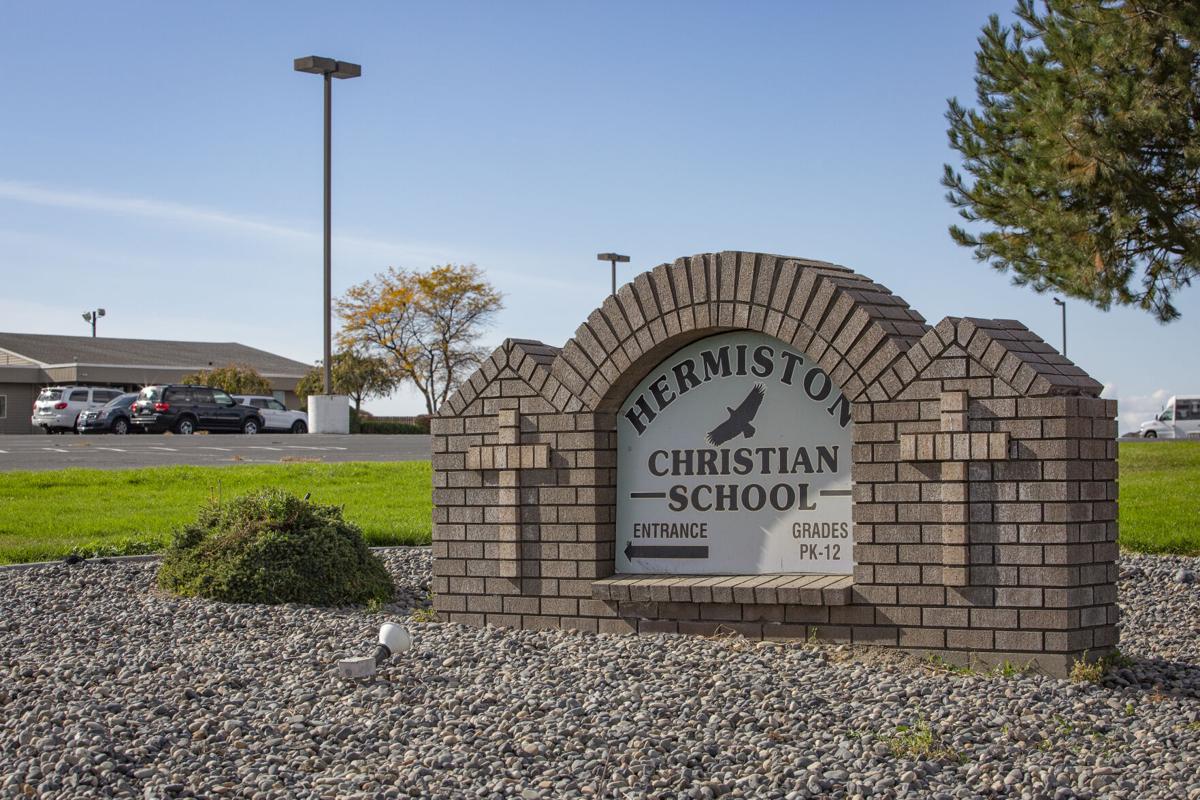 A sign directs visitors to the entrance of the Hermiston Christian School in Hermiston on Wednesday, Oct. 21, 2020.

The Hermiston Christian School has filed suit against Gov. Kate Brown and several other parties challenging the governor’s restrictions on in-person education.

A school bus sitting in the parking lot of the Hermiston Christian School is bathed in sunlight on Wednesday, Oct. 21, 2020.

A school bus sits in the parking lot of the Hermiston Christian School on Wednesday, Oct. 21, 2020.

A sign directs visitors to the entrance of the Hermiston Christian School in Hermiston on Wednesday, Oct. 21, 2020.

PENDLETON — A Hermiston private school, with a total enrollment of 51, is suing Gov. Kate Brown and several other state agencies with the help of a well-heeled conservative legal organization.

Attorneys from the Arizona-based Alliance Defending Freedom filed a complaint on behalf of Hermiston Christian School in federal court in Pendleton on Oct. 16. The complaint alleges that the governor was violating the school’s constitutional rights by forcing it to remain closed during the COVID-19 pandemic.

“After 41 years of faithful service, Hermiston Christian School … could be forced to shut its doors for good unless the court stops an obvious case of discrimination: Defendants’ COVID-19 orders and guidance generally prohibit in-person instruction but grant a ‘small school’ exception to public schools, while denying the same exception to private religious schools … in Umatilla County,” the attorneys wrote in the introduction.

In the complaint, the alliance draws comparisons between Hermiston Christian School and Ukiah School, a public school with similar enrollment in the same county, albeit 80 miles away. While Ukiah was included in a list of small and remote schools that were allowed to reopen for in-person instruction, no private schools in the county, all of them religious, were afforded the same opportunity.

The filing also lays out a timeline of changing reopening standards, the lawsuit alleging that the state had advised private schools they could reopen in the fall before changing course on July 29.

The school’s lawyers argue that the governor’s administration was motivated by a fear that allowing private schools to remain open, while most public schools stayed close, would lead to major disenrollment from the public school. One Brown staffer allegedly said it would cause a “mass exodus” in a conference call with administrators.

The alliance is asking the court to not only issue a temporary restraining order that would allow Hermiston Christian School to reopen, but also grant the school damages for the social distancing measures it installed in its facilities and for the potential enrollees who decided to go elsewhere because of the closure.

The attorneys argued that in-person instruction was not only essential to the school keeping its lights on, but also its affiliate church’s ability to practice its faith.

“In-person education is essential for (the school’s) free exercise of religion,” the complaint states. “(The school’s) mission is to teach its students what it means to be a disciple of Jesus Christ, not only through classroom education, but also through prayer, worship, and religious formation that occurs in-person.”

The alliance not only sued Brown, but also the leaders of several state agencies, including Oregon State Police, Oregon Health Authority and the Oregon Department of Education. All, including the governor’s office, declined to comment or didn’t return a request for comment.

Ryan Tucker, a senior counsel for the alliance, said they needed to include law enforcement agencies in the lawsuit because of their capacity to enforce the governor’s orders even if they hadn’t enforced them yet.

While the alliance equated Ukiah School and Hermiston Christian School, the pandemic has affected each community disparately. Umatilla County Public Health has reported between 0-4 COVID-19 cases in the Ukiah area, while the Hermiston ZIP code has more than 1,600, according to OHA.

Despite these differences, Tucker said the state has already well established its case that the state was making its decision based on religious qualifications.

MORROW COUNTY — Local school districts are beginning to open their doors to students during the COVID-19 pandemic, but the virus continues to …