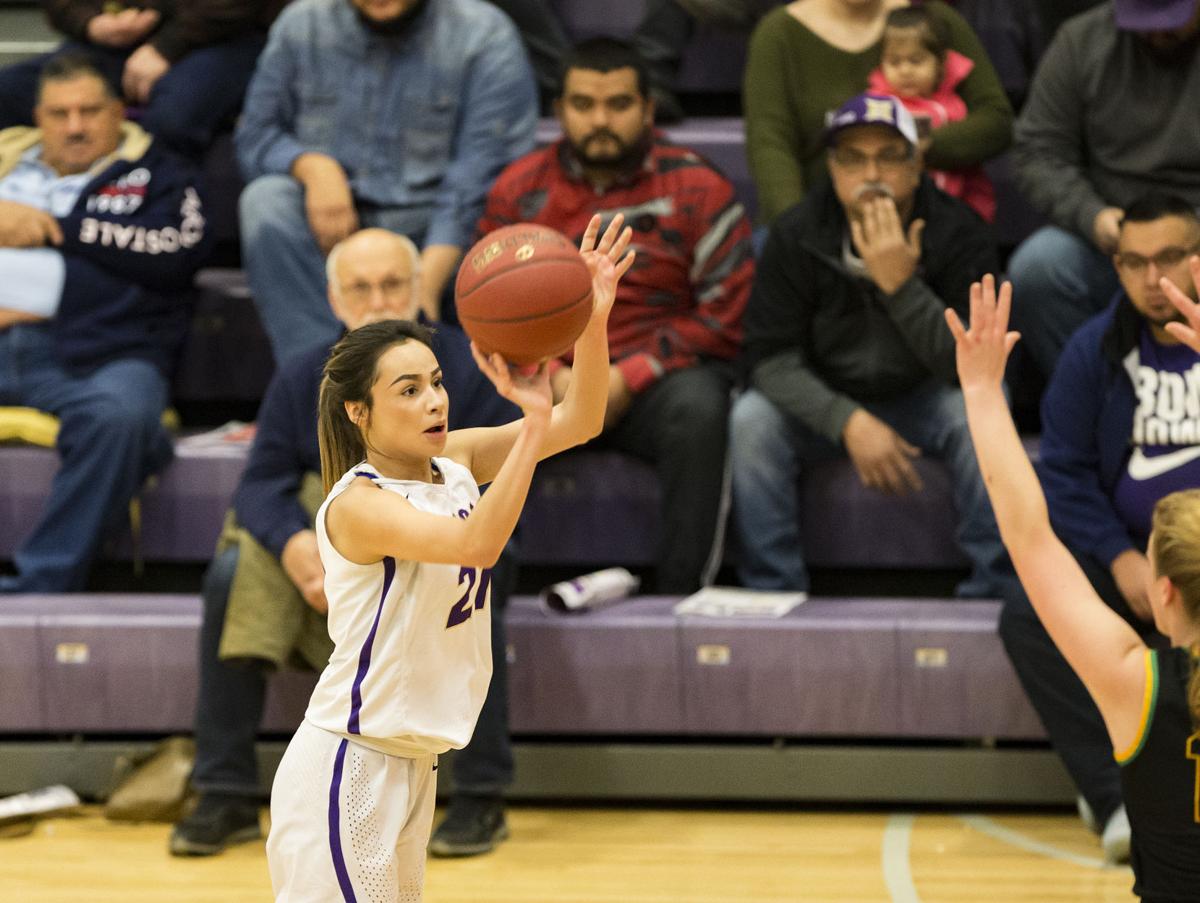 Hermiston’s Mia Hernandez (21) puts up a shot during a Feb. 11, 2020, game against the Shadle Park Highlanders at Hermiston High School. 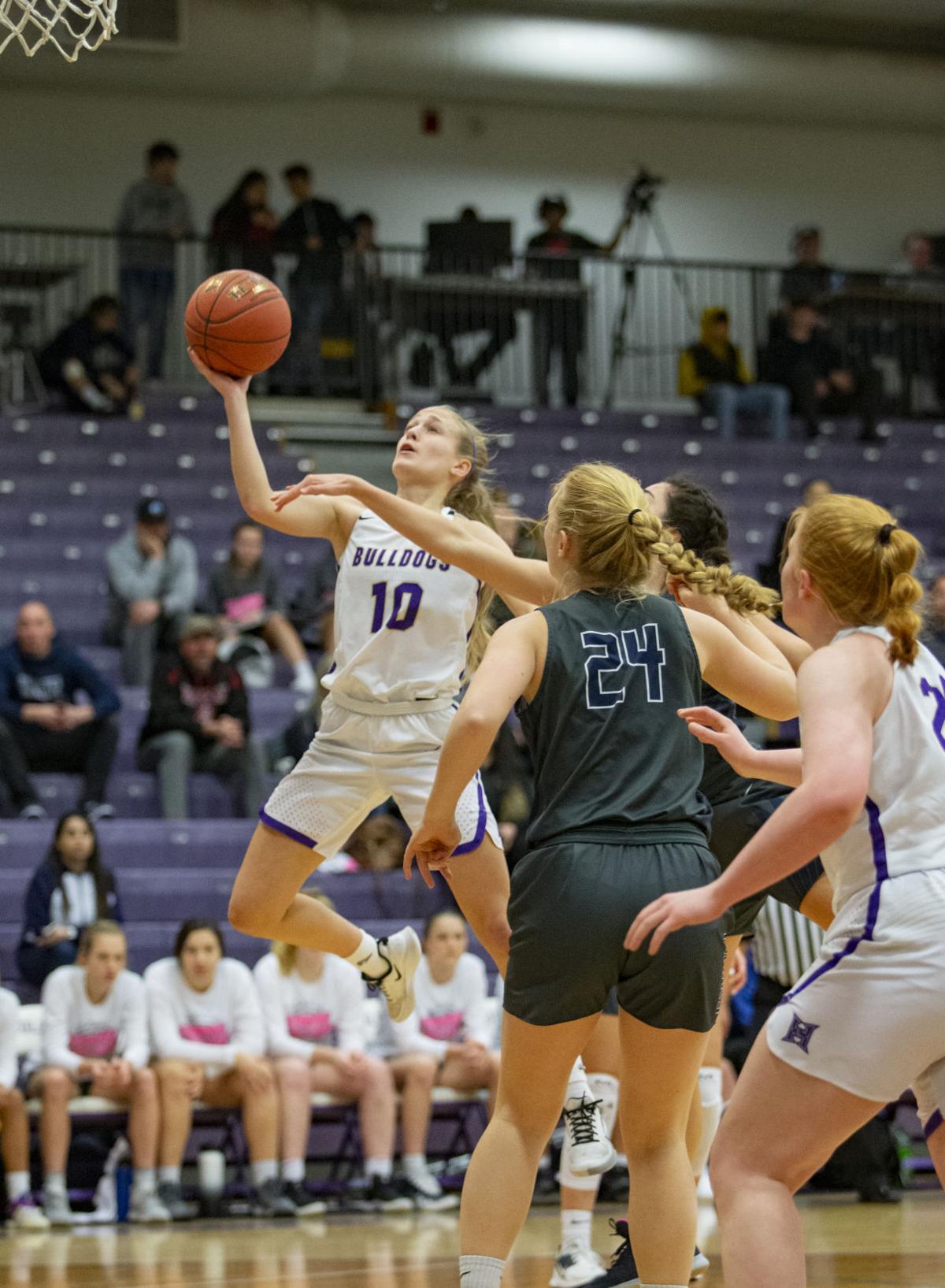 Hermiston’s Mia Hernandez (21) puts up a shot during a Feb. 11, 2020, game against the Shadle Park Highlanders at Hermiston High School.

That is the word Hermiston High School girls basketball coach Maloree Moss likes to use with her players when talking about the upcoming season.

“It is so frustrating,” Moss said. “I can’t keep up with all the rules. I’ve decided I’m not going to look into it until they tell us we can play. I’ve been in contact with the seniors. I can’t imagine what they are going through. When we have a season, we will do this.”

The Bulldogs were handed bad news twice earlier this week.

Oregon Gov. Kate Brown put a statewide freeze on indoor school sports activities that lasts through Dec. 2, but could be extended.

The Washington Interscholastic Activities Association, which Hermiston joined three years ago, voted Nov. 18 to delay the start of winter sports until Feb. 1, and shortened the season from eight weeks to seven. Practice for traditional winter sports was scheduled to begin Dec. 28.

“Sometimes, it’s hard to keep up with everything,” Hermiston athletic director Larry Usher said. “We were proactive and shut down all athletics for two weeks.”

Moss said she has had her team in the gym two to three days a week since the end of September, and that several of her players trained during the summer.

“We have several girls who were playing on elite teams, and others with individual trainers,” Moss said. “They have put in a lot of work. I’ve been impressed with their leadership. When the season comes around, they will be ready.”

Usher said the Mid-Columbia Conference met last week and put together a plan to start winter sports Feb. 1. They sent their plan to the WIAA.

“We needed to be more proactive and realistic,” Usher said. “With the new government shutdown, there was no way we were going to start Dec. 28.”

Usher said the MCC is putting value on participation, even if that means a shortened season and a non-traditional schedule.

“It’s the right thing to do right now,” Usher said. “When it comes to scheduling, we will be as creative as we can. The big question is with things getting moved back to Feb. 1, if that is realistic. If so, are they going to be able to participate in high-risk sports (wrestling and basketball).”

At one time, the WIAA proposed moving fall sports to January, but that plan was quickly tabled.

“Slow pitch softball, cross-country and soccer in the snow is not productive,” Usher said.

Usher said all nine member schools of the MCC are on the same page when it comes to getting student athletes back in action.

“We are concerned about the mental and physical well being of our kids,” Usher said. “We feel bad for them. We want to see participation for our kids.”

With the winter sports being pushed back, the other seasons also have new start dates in 2021.

In Oregon, Gov. Brown’s mandate prohibits all K-12 school sports indoors, including conditioning, training and competition. Outdoor training is still allowed, provided there is no contact of any kind, and masks must be worn at all times.

While Washington schools have pushed the start of winter sports back to Feb. 1, Oregon schools still are scheduled to begin Dec. 28, with competition to start Feb. 11.

The Oregon School Activities Association will have a board meeting Dec. 7 to discuss whether winter sports can go on as planned.

The Oregon Health Authority has prohibited full-contact sports, such as basketball and wrestling. The restrictions cannot be waived by the OSAA.

With sports seasons being moved and shortened, the 2A boys and girls state basketball tournament at the Pendleton Convention Center has been canceled.

The tournament is second only to the Pendleton Round-Up in economic impact for area businesses.

SALEM — After a hiatus of more than nine months, organized high school sports in Oregon are set to resume Dec. 28 with a season for traditiona…