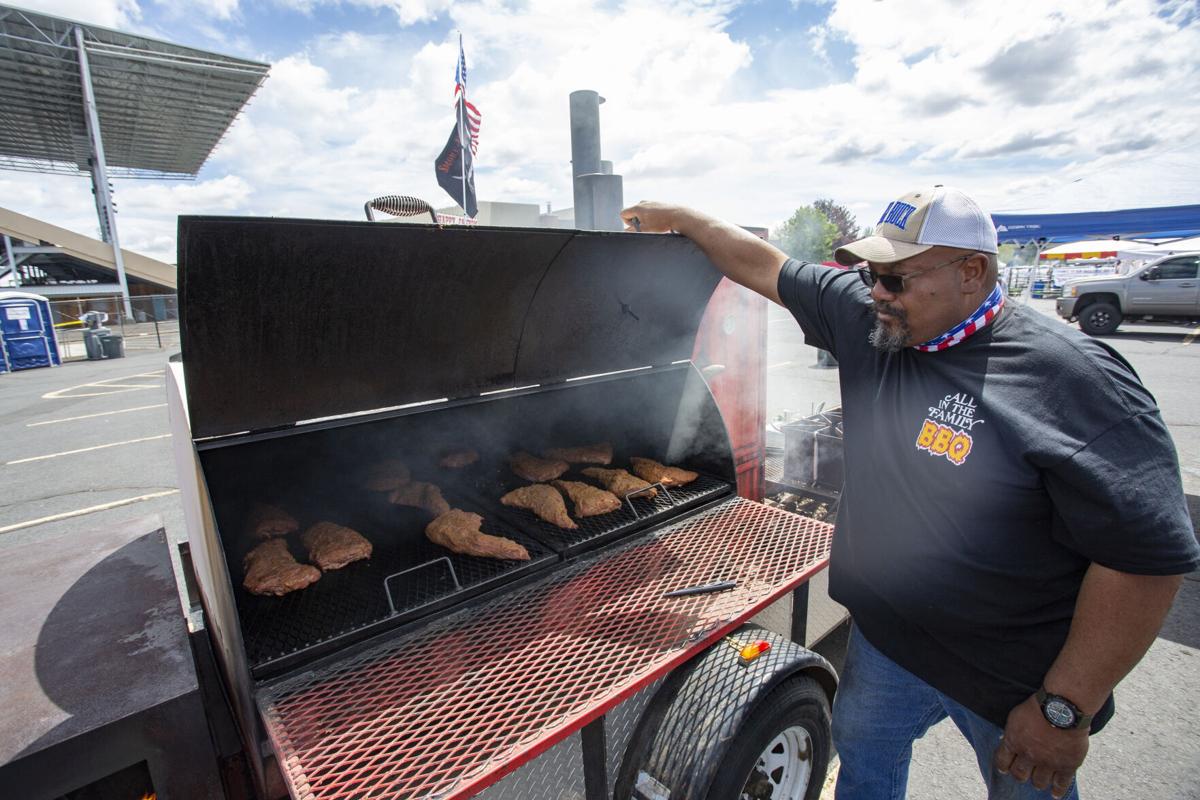 Michael Willingham lifts the lid to examine his tri-tip during the Buckaroo BBQ Challenge at the Pendleton Convention Center on Saturday, May 1, 2021. 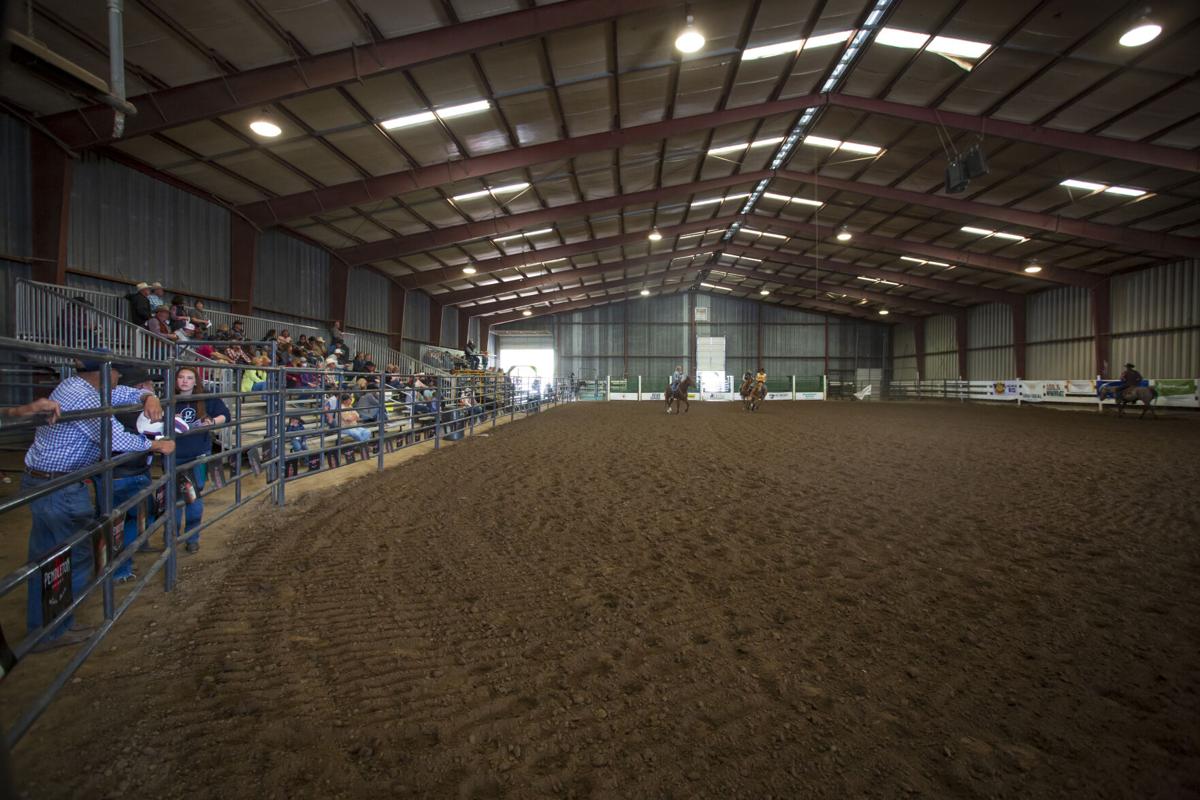 Spectators fill in the stands of the Round-Up Pavilion on Saturday, May 1, 2021, for the Western Select Ranch Horses preview at Pendleton Cattle Barons. 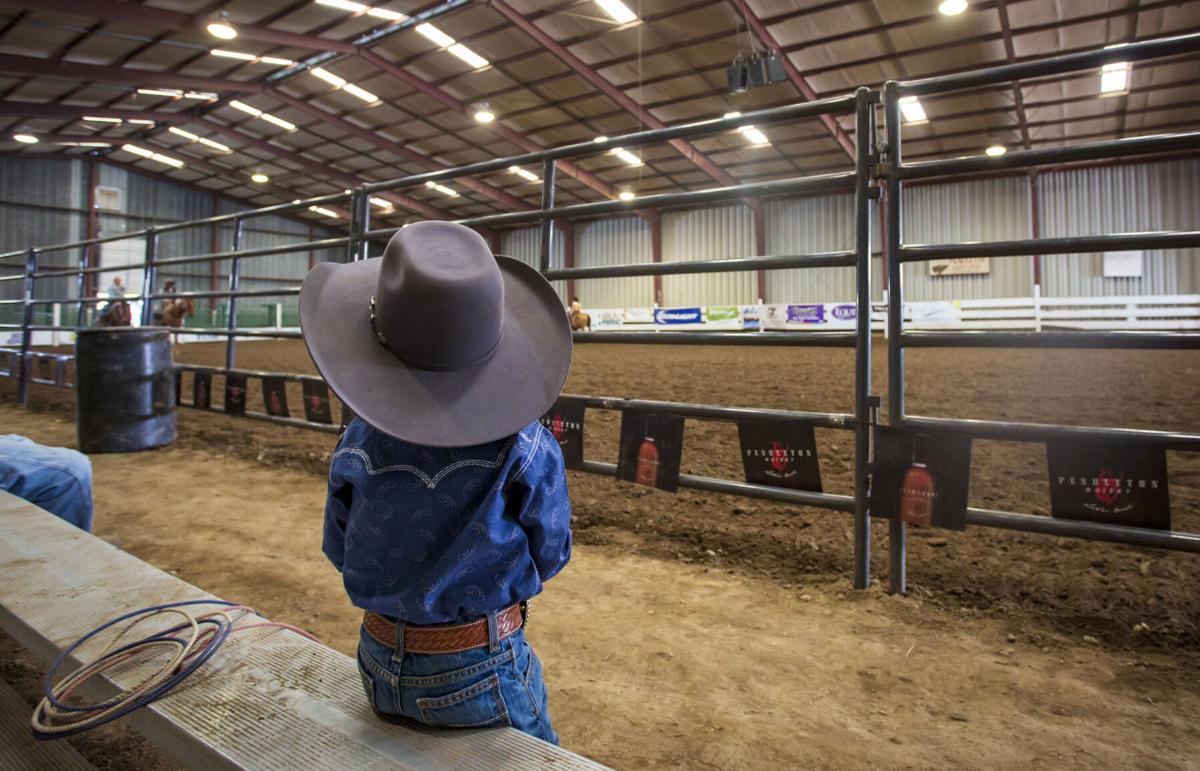 A young cowpoke watches the start of the Western Select Ranch Horses Preview in the Round-Up Pavilion on Saturday, May 1, 2021. 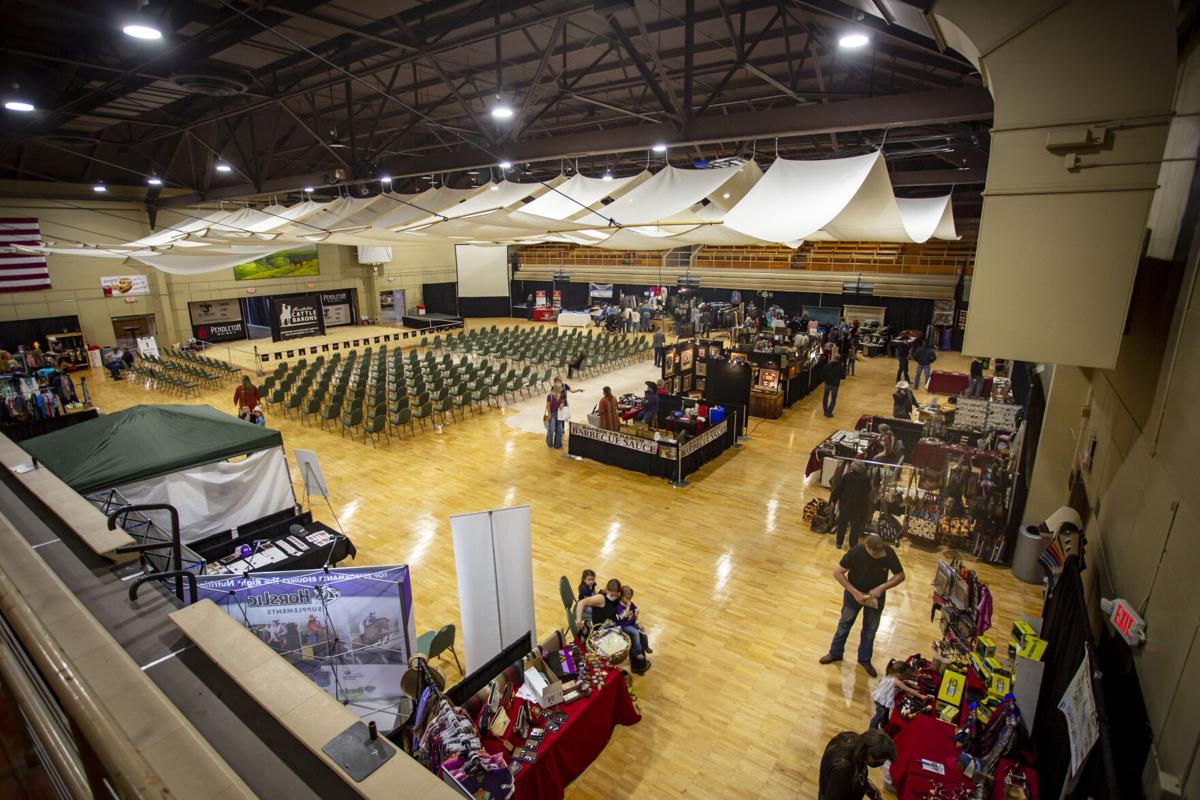 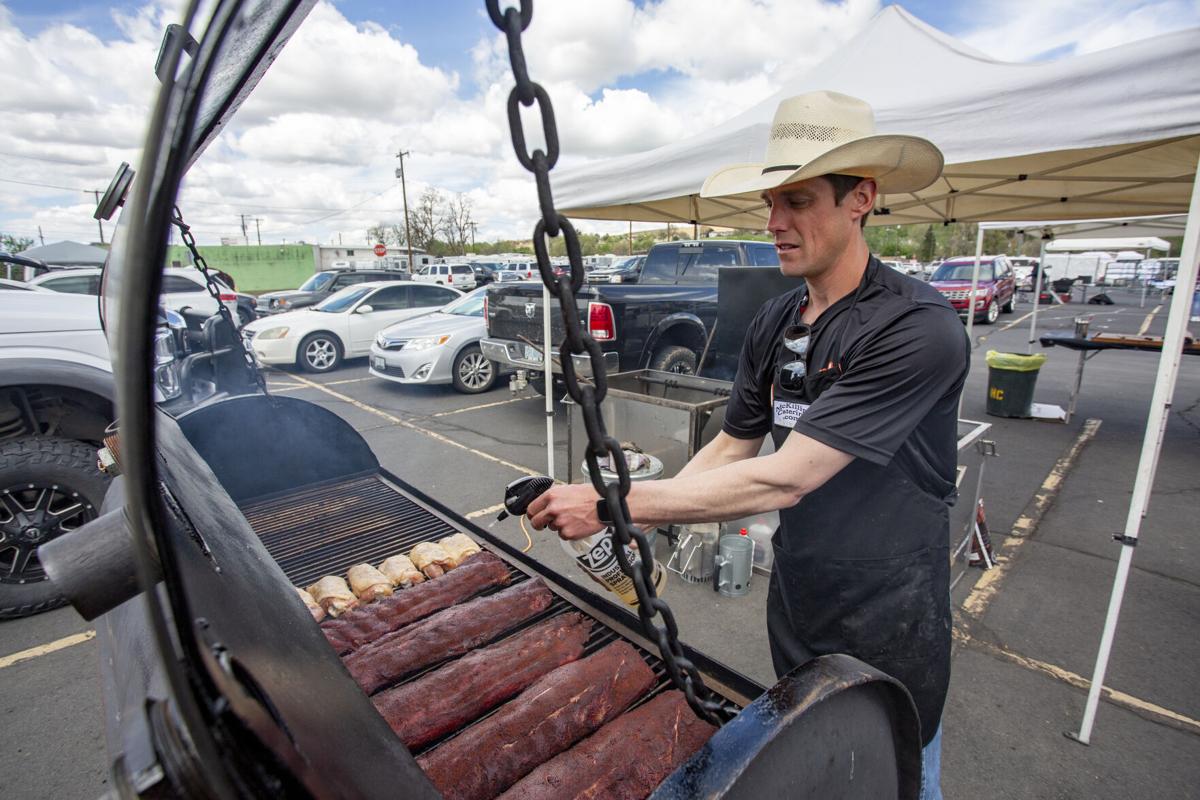 Cody McKillip tends to his meat during the Buckaroo BBQ Challenge at the Pendleton Convention Center on Saturday, May 1, 2021. 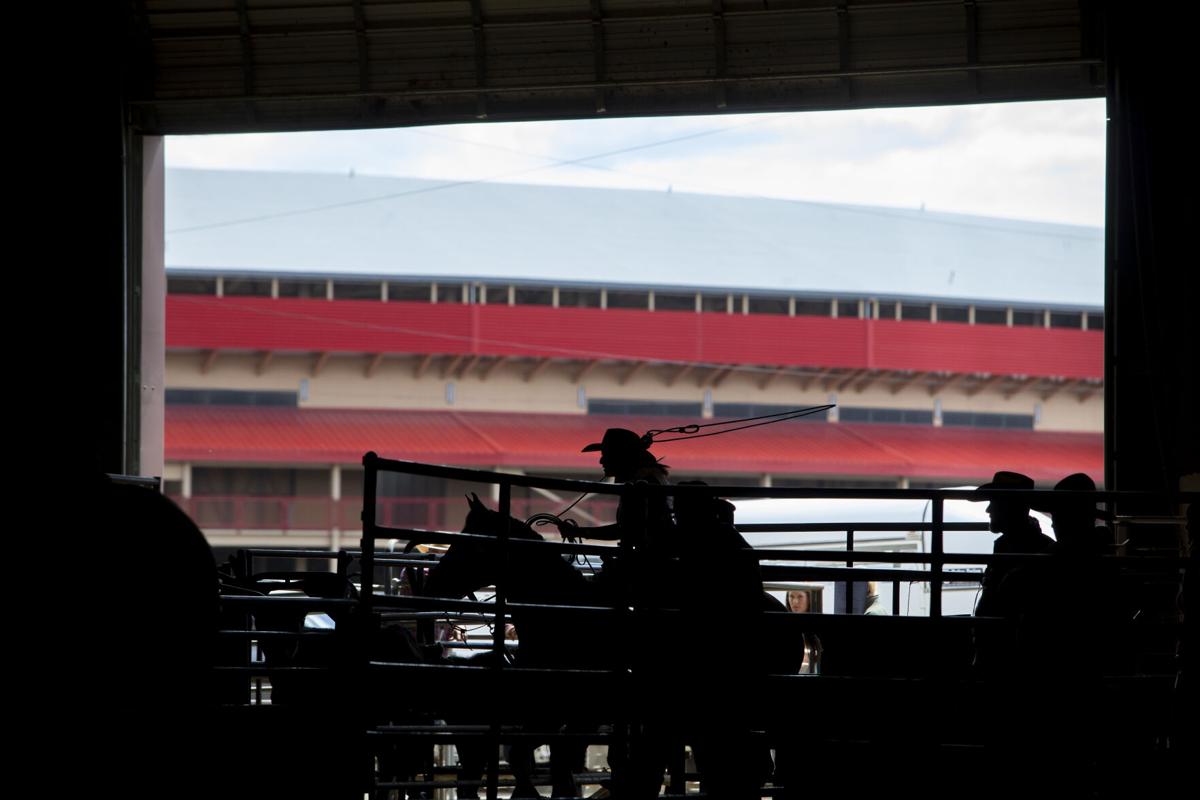 A roper is silhouetted against the Pendleton Round-Up Arena during Pendleton Cattle Barons on Saturday, May 1, 2021.

Michael Willingham lifts the lid to examine his tri-tip during the Buckaroo BBQ Challenge at the Pendleton Convention Center on Saturday, May 1, 2021.

Spectators fill in the stands of the Round-Up Pavilion on Saturday, May 1, 2021, for the Western Select Ranch Horses preview at Pendleton Cattle Barons.

A young cowpoke watches the start of the Western Select Ranch Horses Preview in the Round-Up Pavilion on Saturday, May 1, 2021.

Cody McKillip tends to his meat during the Buckaroo BBQ Challenge at the Pendleton Convention Center on Saturday, May 1, 2021.

A roper is silhouetted against the Pendleton Round-Up Arena during Pendleton Cattle Barons on Saturday, May 1, 2021.

PENDLETON — The smell of roasting tri-tip and baby back ribs wafted from smokers across the parking lot outside of the Pendleton Convention Center, where the Willingham family chatted and laughed on an afternoon warm enough for T-shirts.

The lot was filled Saturday, May 1, with dozens of competitors, each looking to dish up the most delicious barbecue of the day, and the Willinghams had returned to reclaim their title.

“I like the atmosphere down here,” said Michael Willingham, a corrections officer at Eastern Oregon Correctional Institution.

Until recently, Willingham said he would have shrugged off the idea of competing at the Buckaroo BBQ Challenge, which is part of the annual Pendleton Cattle Barons weekend event. With things changing every few weeks due to the pandemic, he was concerned that the event would be canceled and that all his effort, and his money, would go to waste. But standing beside his family — some of whom he hadn’t seen since before the pandemic began — he was glad the event had worked out.

“It’s good to get out and do things with your family again,” he said. “Just always sitting at home. It’s driving me crazy.”

Hundreds of people gathered in and around the convention center over the weekend for the annual Cattle Barons, one of the first major events in the Pendleton area since the pandemic began. The event raised scholarship funds for students looking to start careers in agriculture.

“It’s nice to be outside doing something, especially during COVID,” Natasha Willingham, Michael’s daughter.

Andy VanderPlaat, the president of Cattle Barons, said that until January, the board was unsure if the event would happen due to the pandemic, as plans and commitments need to be made months in advance.

“Things were a little uncertain and crazy to figure out what we could, how we could do it and meet the guidelines and all the things that were going on,” he said.

But in January, when the board heard from scholarship recipients about the value of their education, they decided to move forward.

“We realized we had to be flexible,” he said. “Trying to change the event was not going to be a sustainable or workable thing for us. A lot of people have done things virtually. We’re an outdoor-type event, so we stuck with the plan we had in the past and tried to modify it as much as we could.”

VanderPlaat said the event is especially important for young people looking to enter the agriculture industry after a challenging year where “jobs were somewhat questionable and money was a little tough.”

“This is a huge agriculture area, a primary industry here,” he said. “We need skills and knowledgeable young people to come back and keep it going.”

In all, VanderPlaat said the event received much support from the community.

“People have been encouraging,” he said. “It’s our first event in Pendleton and it’s been really good, all the people who have helped us get to where we are now. We’ve really been blessed.”

Many attendees came clad in Western wear — 10-gallon hats, blue jeans, lassos and cowboy boots. They strolled around the trade show, with its vendors offering homemade barbecue sauces and other memorabilia from across Eastern Oregon, and around back at the Round-Up Pavilion, where ranch horses and working dogs were previewed and sold.

And for many, there was the sense of relief and relaxation simply to be outside and away from their homes.

“It’s been relaxing to see people out and about,” said Laura Jones, a clerk from St. John, Washington.

Jones woke up at around 3:30 a.m. on May 1 and made the drive to Pendleton for Cattle Barons, eager to finally attend something that would get her out of the house. Raised in Hermiston, she grew up attending events like the Round-Up and would meet up with family at Cattle Barons before her birthday.

“We’re glad to be out and seeing things kind of opening back up and getting available,” she said.

And for Cody McKillip, the owner of McKillip’s Catering in St. Paul, the event was a respite from a hard year for his family’s business.

“We damn sure took a hell of a hit last year,” said McKillip, who competed in the barbecue competition. “Our business was down about 65%, but this year’s looking a little more promising.”

Despite the hardship, his business was still able to get by with takeout orders, at times cooking 80 orders at a time for more than 300 local customers.

Like many of the attendees, McKillip said he was “proud of Cattle Barons for staying with this.”

“It’s something that needs to happen,” he said of the event. “There’s no reason why we can’t do it. I understand the need to be safe and do things differently, but it’s good to show everyone in the Northwest that these things can actually happen. They’re going on everywhere else in the country, so why can’t we be like them?”