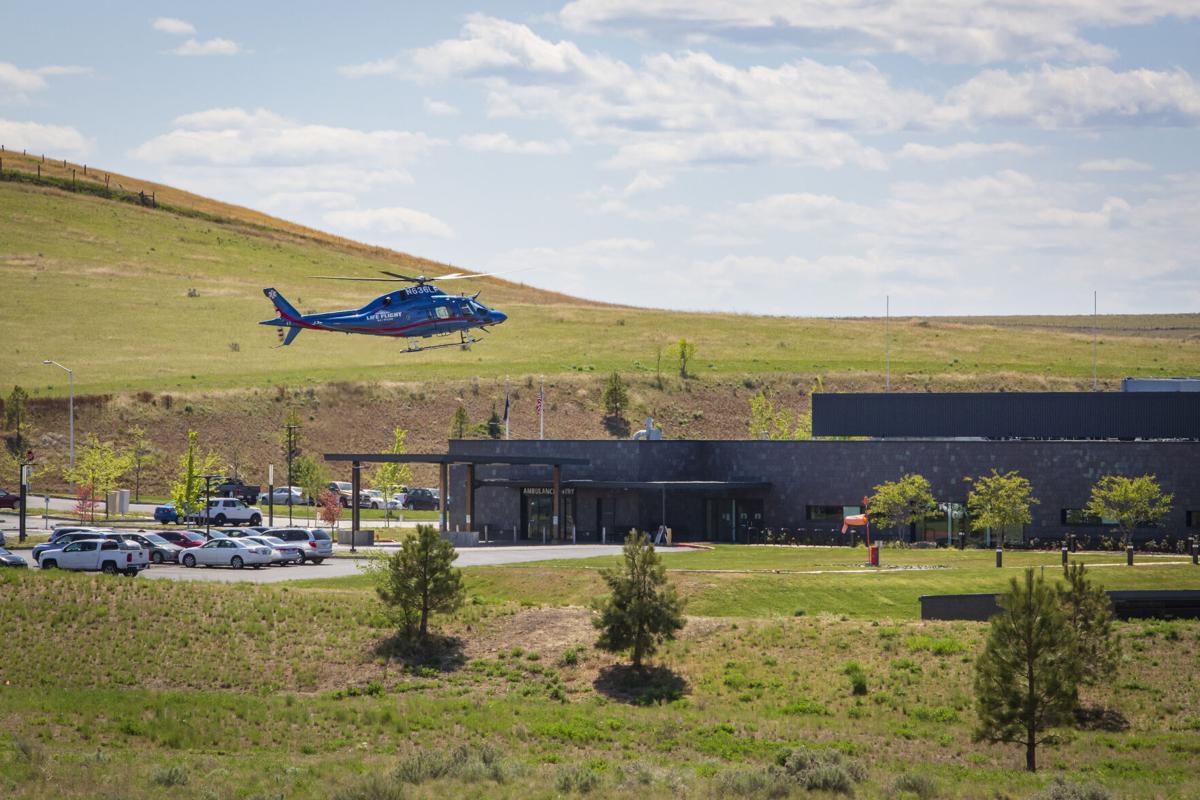 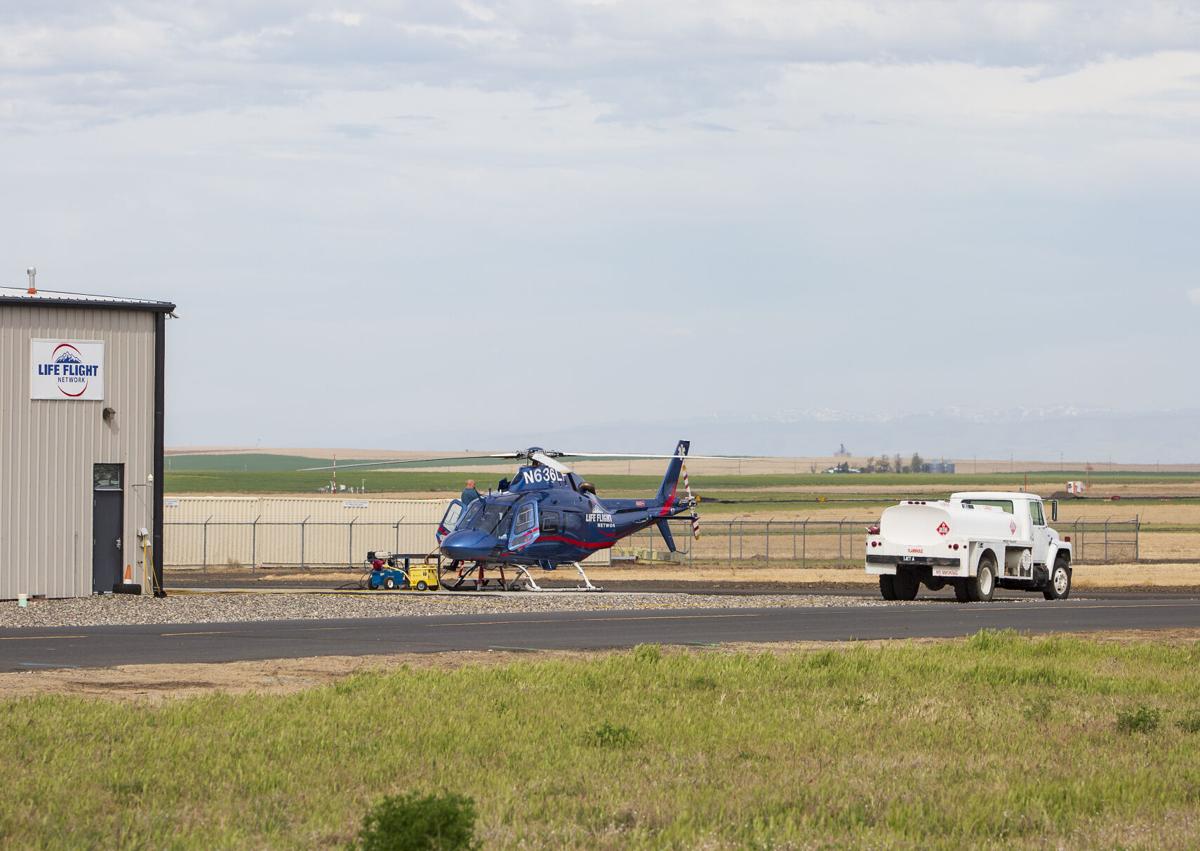 A Life Flight Network helicopter sits on the tarmac at the air ambulance operator’s Pendleton hub at the Eastern Oregon Regional Airport on April 29, 2020.

A Life Flight Network helicopter sits on the tarmac at the air ambulance operator’s Pendleton hub at the Eastern Oregon Regional Airport on April 29, 2020.

HERMISTON — As rising COVID-19 numbers spark worry about hospital capacity in Oregon, the ability to quickly move patients between hospitals has been an important part of planning for surges.

In 2020, Life Flight Network transported about 600 confirmed COVID-19 patients across its service region, which covers the Pacific Northwest and part of Western Montana. A news release from the “largest not-for-profit air transport service in the United States” stated in total it used full COVID-19 protocols in about 1,300 transports where patients had COVID-19 symptoms.

Tim Beard, one of the flight nurses who cares for patients as they’re being transported via plane or helicopter, said in some ways, his job is the same as it has always been: transport critically ill patients. But while flight nurses have always worn surgical masks around patients with flu-like symptoms, they now wear N-95 masks with all patients and a head-to-toe set of personal protective equipment when transporting patients with symptoms of COVID-19.

“It’s a very confined space, so it’s hard to distance,” he said.

Beard has been a nurse for more than 20 years, and been flying with Life Flight Network since 2016. He has flown out of various parts of Eastern Oregon and Southern Washington during that time, and is currently in Spokane.

Flight nurses work two, 24-hour shifts a week. Sometimes, they pick up patients directly from the scene of a car crash or other emergency. Other times they transfer current hospital patients to a facility that is better equipped to handle their needs. During the pandemic, Beard said, that has often involved transporting COVID-19 patients from rural critical access hospitals to a larger hospital with more specialized equipment and personnel.

So far, he said, he hasn’t personally seen patients being moved from a large hospital to a small one because the hospital in the big city has overflowed its capacity. But what he has seen is patients having to be flown farther than usual because the hospital Life Flight would usually take them to isn’t able to take them. A patient from Idaho, who would usually be taken to a hospital in Spokane, for example, had to go to all the way Wenatchee in Central Washington instead.

That holds true for both seriously ill COVID-19 patients and those who need care after suffering some other kind of medical emergency.

“This has impacted more than just the patients that are sick with COVID,” Beard said. “I don’t think the general public really realizes the impact. If they or a family member don’t have a COVID-19 infection, their health care can still be impacted.”

Life Flight’s air ambulance in Umatilla County is stationed at the Eastern Oregon Regional Airport in Pendleton. When Life Flight announced it was adding a Pendleton base in 2012, it stated that Pendleton’s airport was a good location because it had a long runway, a fire station on-site and was on a hill that sees less fog than some of the other locations it was considering.

Mike Weimer, Life Flight Network regional vice president of Region 2, said someone in Umatilla County who was transported by Life Flight could also end up on an air ambulance stationed in other locations, such as La Grande, Walla Walla, Washington, or Dallesport, Washington, if the Pendleton aircraft is already on a flight.

Good Shepherd Medical Center in Hermiston is one of the rural hospitals that Life Flight serves.

Brian Patrick, vice president of nursing, said as a “critical access hospital,” one of Good Shepherd’s functions is to be able to get patients in the Hermiston area to a larger hospital if they need more specialized care than Good Shepherd is able to provide. The hospital’s contract with Life Flight helps facilitate that, he said.

Patrick said the hospital also recently signed an agreement with Umatilla County Fire District No. 1 to share the cost of an ambulance and crew stationed at Good Shepherd solely for transports. Ground transports can be more appropriate in some situations, such as in severe weather or with a patient whose condition would be negatively affected by the pressure at a high altitude.

“One limitation with Life Flight is that if it’s foggy or windy, that limits their ability to get out of here,” Patrick said.

With Life Flight, however, a patient having a heart attack can get to a catheterization lab within 90 minutes, he said. Patrick also pointed out that Life Flight is staffed by nurses qualified to give a more advanced level of care than a paramedic, with more advanced equipment at their disposal than a typical ambulance.

A recent news release from Life Flight Network stated Life Flight’s aircraft and specialized ambulances act as a “mobile intensive care unit” able to perform care such as ICU-level ventilation. The network recently announced new upgrades to its capabilities, including the ability for in-flight plasma transfusions.

The service transported its first suspected COVID-19 patient on March 1, 2020.

“This year has required health care workers across the region to come together to respond to this unprecedented public health crisis,” Michael Griffiths, CEO of Life Flight Network, said in a statement. “Working alongside first responders, doctors, and nurses in every part of the region, we’ll continue to do our part for as long as we’re needed.”