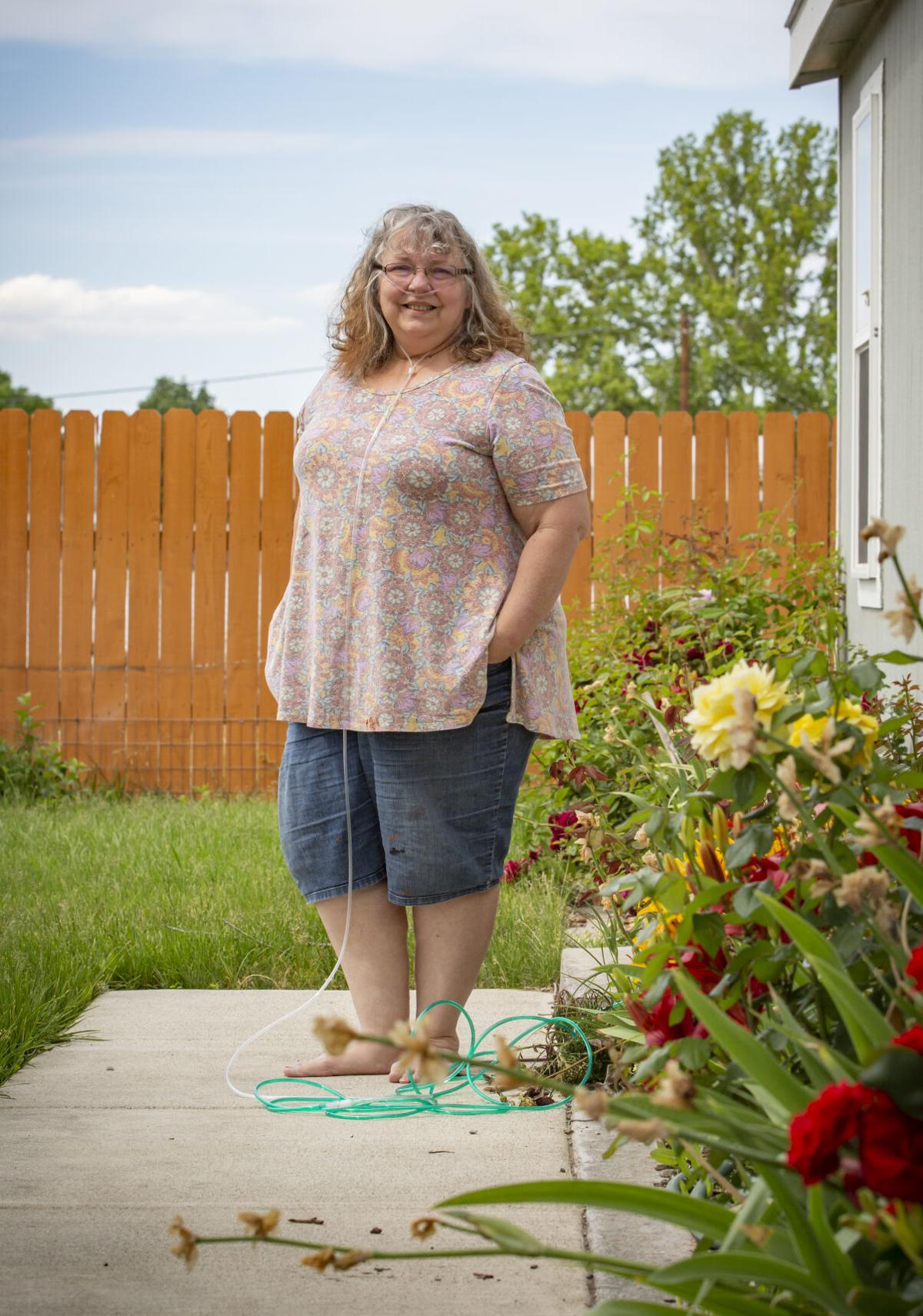 Sara Barnett, 53, poses for a portrait in front of her Hermiston home — her oxygen hose coiled at her feet — on June 4, 2020. Barnett was diagnosed with COVID-19 and spent two weeks in the hospital before being discharged on June 2. 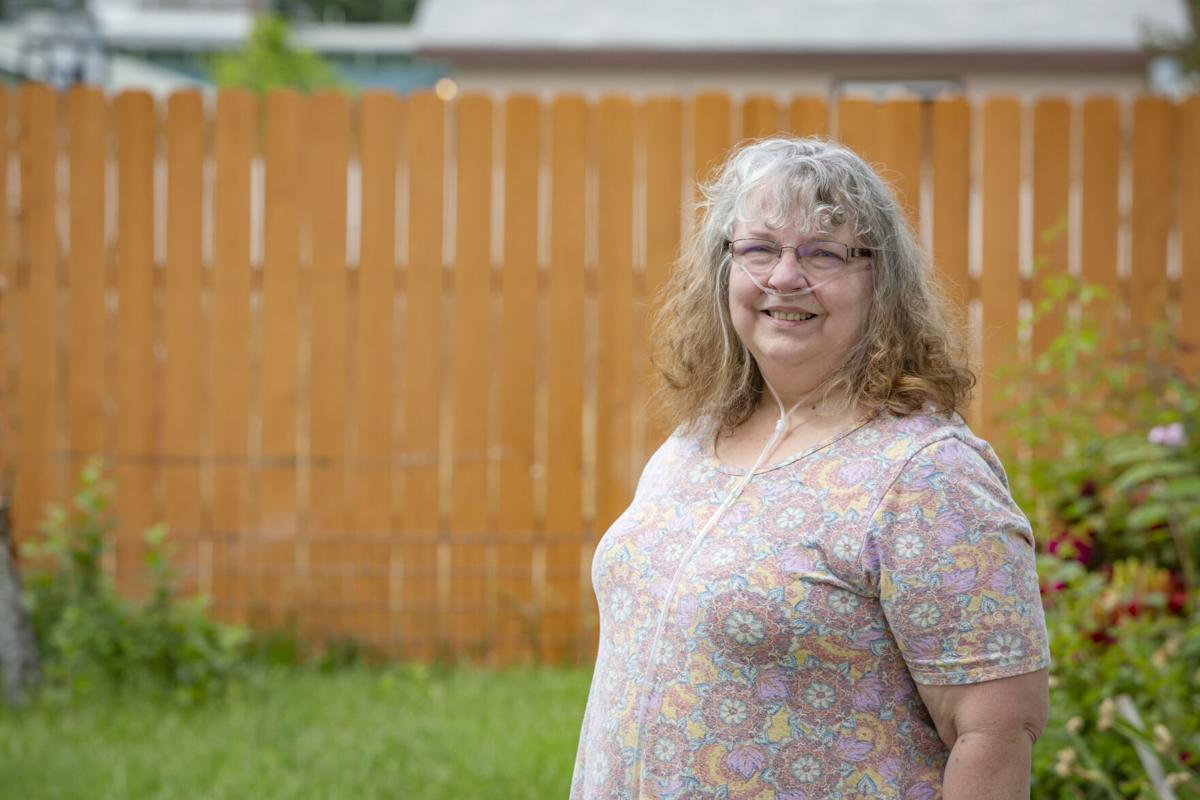 Sara Barnett, 53, poses for a portrait in front of her Hermiston home on June 4, 2020. Barnett was diagnosed with COVID-19 and spent two weeks in the hospital before being discharged on June 2. Barnett remains on oxygen. 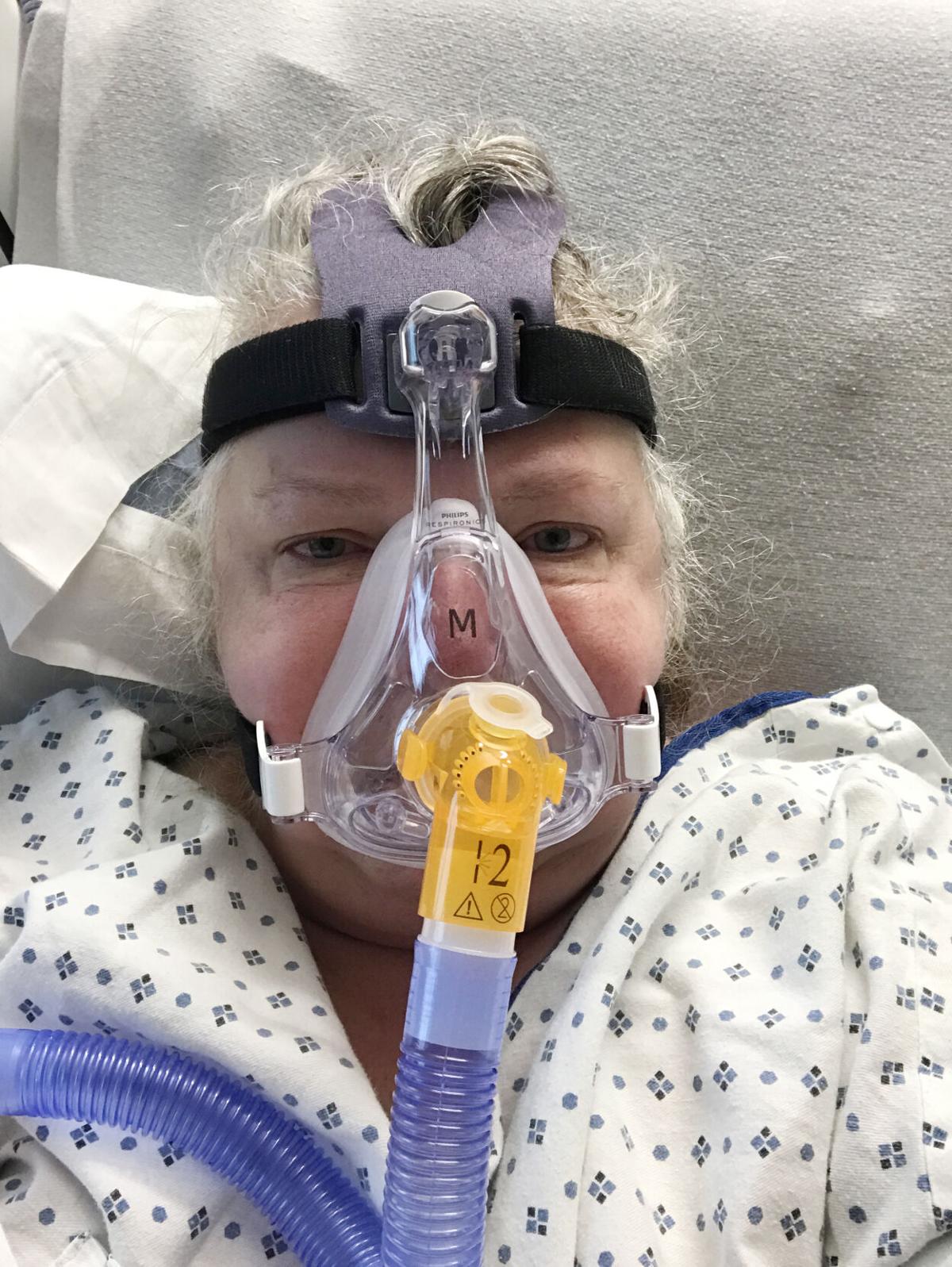 Sara Barnett wears an oxygen delivery device while in the intensive care unit at Kadlec Medical Center in Richland, Wash., as a result of COVID-19.

Sara Barnett, 53, poses for a portrait in front of her Hermiston home — her oxygen hose coiled at her feet — on June 4, 2020. Barnett was diagnosed with COVID-19 and spent two weeks in the hospital before being discharged on June 2.

Sara Barnett, 53, poses for a portrait in front of her Hermiston home on June 4, 2020. Barnett was diagnosed with COVID-19 and spent two weeks in the hospital before being discharged on June 2. Barnett remains on oxygen.

Sara Barnett wears an oxygen delivery device while in the intensive care unit at Kadlec Medical Center in Richland, Wash., as a result of COVID-19.

HERMISTON — As COVID-19 spreads locally, stories from Umatilla County residents who have had the virus show its effects can run the gamut from inconvenient to deadly.

As of June 5, Umatilla County Public Health has announced 124 confirmed cases and six presumptive cases of COVID-19, with 112 of those people considered recovered, and three patients who have died.

Sara Barnett’s experience falls on the more serious side. The 53-year-old Hermiston woman’s doctors have told her she is lucky to be alive after two weeks in the hospital. She was discharged on June 2, but is still on oxygen.

“Today, I got up to make lunch and said, ‘This is too hard,’ and went back to bed,” she said the next day.

Her symptoms started on May 10.

“At first I felt achy — everything ached — and I had a bad headache and cough,” she said.

Her first test for COVID-19 came up negative, but since her husband and her father tested positive, she was told it was likely a false negative or that the virus wasn’t at a detectable level yet when she was tested.

Seven days after her first symptoms, she woke up struggling to breathe and drove to Kadlec Medical Center in Richland, Washington, where she was admitted and took a second COVID-19 test, which later came back positive.

Things went downhill from there. First they put her on 2 liters of oxygen, then 4 liters, then 30, before putting her on a machine that she said “blew air so hard my mouth was wide open and I couldn’t close my mouth.” Hospital staff couldn’t get her fever below 102 degrees for days. When she continued to deteriorate, she was rushed to the intensive care unit, where her doctor told her husband they were trying everything they could to keep her from needing to be put on a ventilator.

Barnett had already been taking hydroxychloroquine, the drug touted by President Donald Trump as a possible cure, for arthritis. She said another experimental treatment she was given was plasma from a patient who had recovered from COVID-19.

“A nurse came to me and said, ‘We’ve given you everything we can,’ and I asked, ‘What can you do?’ and she said, ‘Basically the best we can do now is keep you comfortable,’” Barnett said.

Fortunately for Barnett, she did eventually begin to recover and have her oxygen use stepped back down to 2 liters, which she is on now at home as she recovers from the pneumonia that is one of the side effects of her illness.

“They’re hoping it will just be a couple of weeks, but it could be forever, or months,” she said of her need for an oxygen tank. “They told me it could easily take three to six months for me to feel like a human again.”

Barnett said she hopes her tale can be a cautionary one for people who think COVID-19 isn’t very serious. She and her father, who both have underlying health conditions, had been “hiding out at home” for weeks, which she said means that her husband brought the virus home to them — something he obviously didn’t intend to do. He had serious symptoms but was never hospitalized, while her father was hospitalized for four days.

She said she worries now what her future will look like, as no one knows the long-term effects of COVID-19, but she is also extremely grateful to have a chance for more years with her husband, grandchildren and other family.

Barnett said it is hurtful to see people write dismissively on social media about the victims of COVID-19 as “just” people who have underlying health conditions, which include commons conditions, such as asthma, diabetes, high blood pressure, heart disease and a history of smoking.

“I’m 53, and yes I have some preexisting conditions, but to my family, to my friends, to my church, I am very valuable,” she said. “When people say, ‘Oh, she’s old,’ or ‘Oh, they had underlying health conditions.’ ... What if that were your mother or grandmother or sister?”

On the other side of the spectrum of experiences are Teresa and Timothy Curtis, both 62.

The married couple lives in Hermiston and recently returned to work after recovering from a mild case of the virus.

“We want people to know it isn’t a death sentence,” Teresa Curtis said.

Timothy Curtis first started to have some concerns that he may have been infected when he started feeling “off” and heard that someone he knew, and may have recently been in contact with, had tested positive for COVID-19.

Though he thought it could be attributed to inhaling some drywall dust at his work with the Umatilla County Housing Authority, Timothy Curtis got tested May 15 and was officially diagnosed with COVID-19 on May 18.

As he awaited his results, Teresa Curtis started developing some of her own symptoms and was fairly confident she had the virus when she got tested on May 19. That confidence was confirmed in a couple days time when the positive test result came in on May 22.

But for the roughly 10 days that she and her husband had symptoms of the virus, it never progressed to more than fatigue and some minor body aches “like if you worked too much in the yard for a day,” along with a loss of their senses of taste and smell.

“That was the weirdest part,” she said.

The process of getting a test was fairly simple for the couple, Teresa Curtis said, and they paid no out-of-pocket costs for the swab test they received while sitting in their cars at the Mirasol Family Health Center in Hermiston.

“The hardest part was the waiting for the results,” she said.

The two spent a majority of their time isolating from the rest of the community inside their home and only left to go on an occasional drive together. Following their experience with COVID-19, Teresa Curtis said they found it wasn’t as frightening as they expected.

“I had more fear before I got it than when I actually had it,” she said. “The thing I was most afraid of was spreading it to somebody else.”

She found out on a Thursday that a co-worker had COVID-19, and the next Tuesday, May 19, she “kind of woke up not feeling myself.”

“My taste and smell were off, but I thought it might just be one of those days,” she said.

A few hours later she had a tickle in her throat and had started to cough, and that progressed to other symptoms that included aches and pains, chest tightness, chills, fever and a complete loss of all sense of taste and smell.

She ran a fever of between 99 and 101 degrees for six days, and said during that time she was so tired that just walking from the couch to the bathroom exhausted her.

“It kind of feels like when you get the flu, but this was a whole other level,” she said.

At one point, she stared at herself in the bathroom mirror, convinced her lips were starting to turn blue, even though her husband assured her they looked normal.

“Your brain goes to the worst possible scenarios,” she said.

Borgaard drove to a clinic for her test, but other than that she and her husband, who so far hasn’t displayed any symptoms, stayed home, in contact by phone with Umatilla County Public Health officials who tracked their symptoms and offered advice.

After a full week without running a fever, she said she feels mostly better, other than tiredness and a cough.

Borgaard was quoted by the East Oregonian in March for a story about weddings affected by COVID-19, when she and her new husband were trying to decide what to do about their upcoming nuptials. They ended up getting married with only a handful of people in the room, 6 feet apart with masks on, and having a virtual wedding reception by playing games with friends and family over video chat.

She said it was frustrating that she ended up getting sick anyway, but the decision not to have a gathering was also to protect other people. She said she hopes people take COVID-19 seriously.

“I hear people say, ‘It’s just a little worse than the flu,’ and I say, yeah, if you’re healthy and if you’re lucky,” she said. “I’m a healthy person, and I still got it pretty bad.”

Umatilla and Morrow counties enter next phase of reopening

UMATILLA COUNTY — Umatilla and Morrow counties are into the next phase of reopening from COVID-19 restrictions.