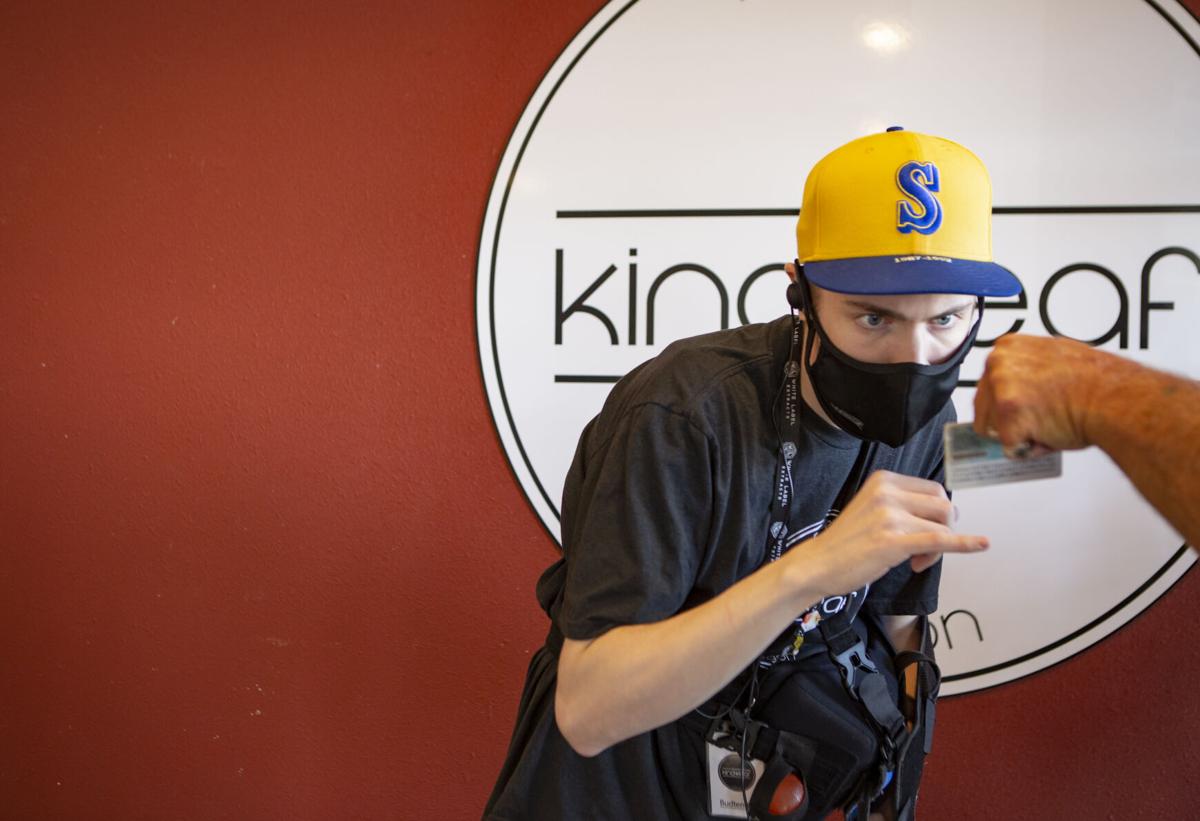 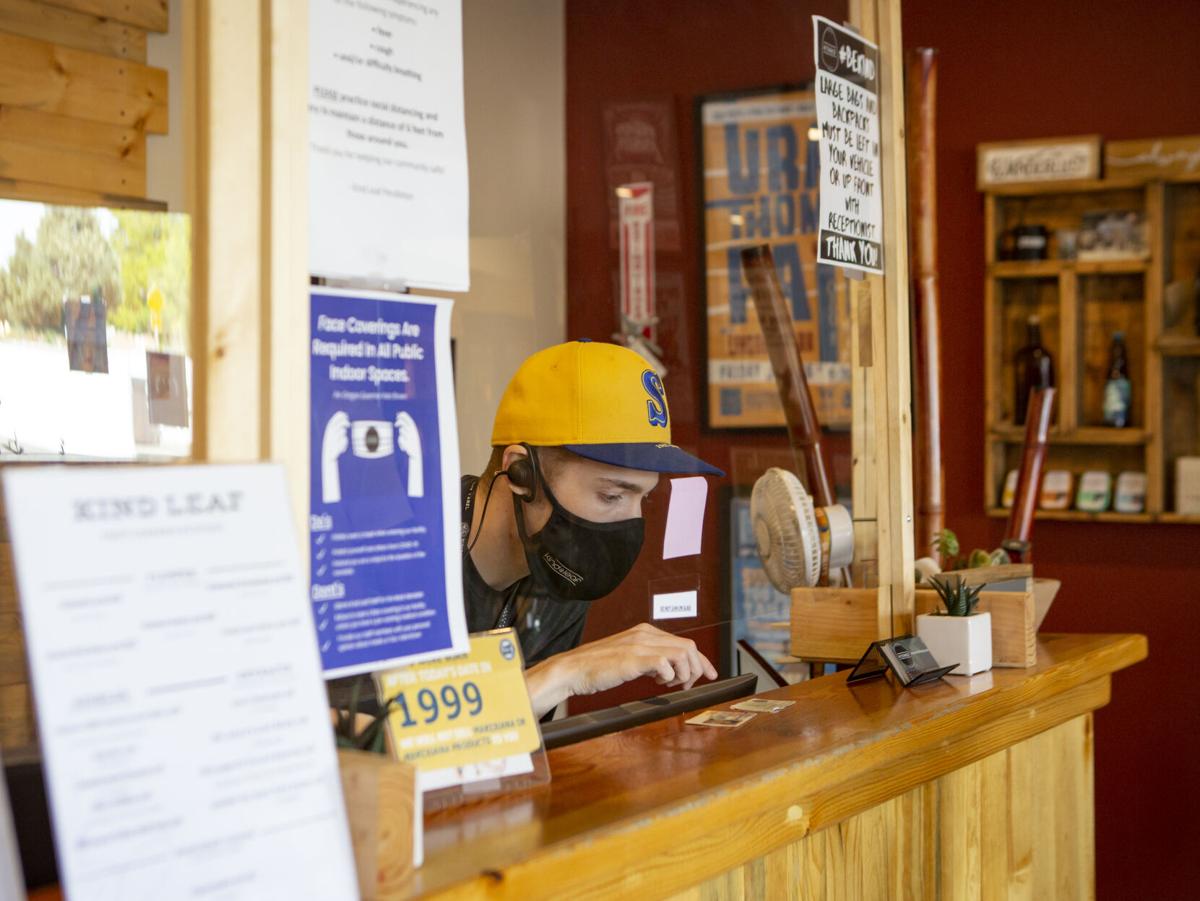 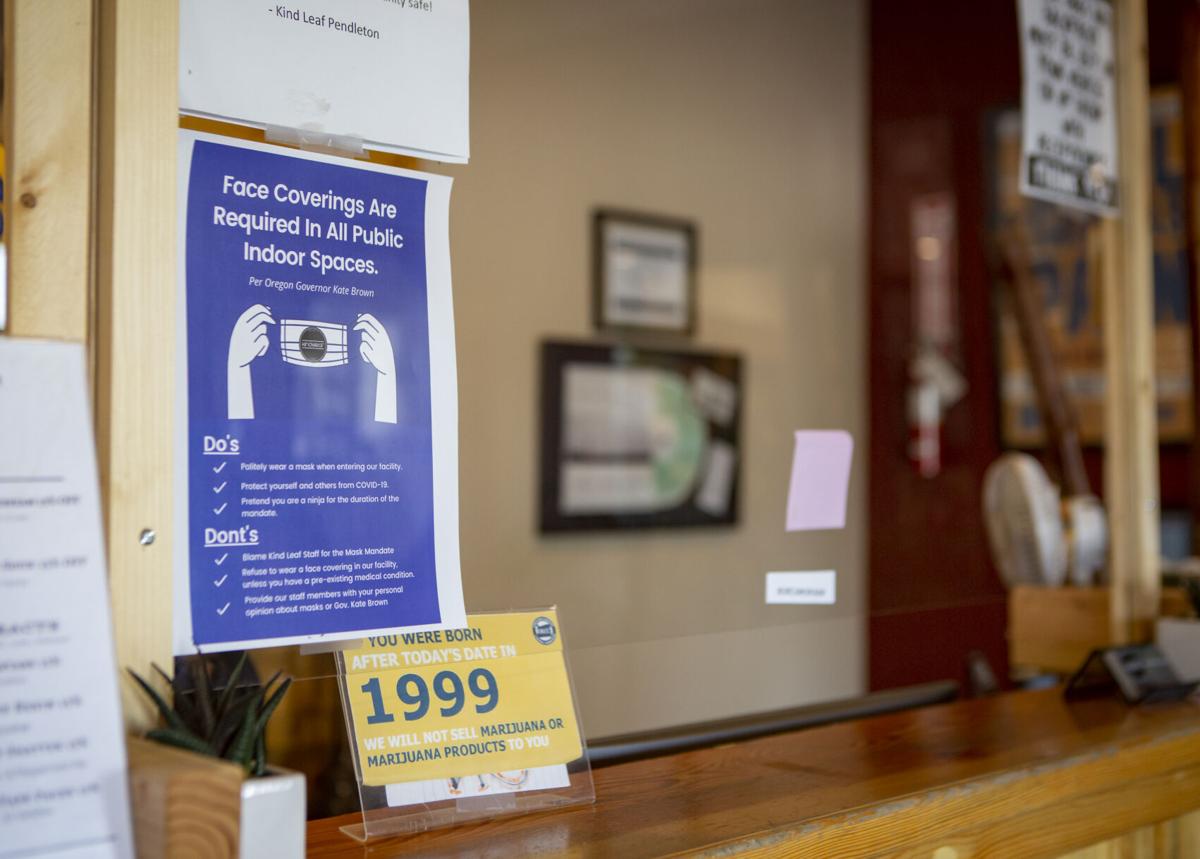 Signage on a plexiglass shield at the entrance to Kind Leaf Dispensary in Pendleton advises customers that they are required to wear a mask and be at least 21 years of age to enter the facility on Wednesday, July 22, 2020. 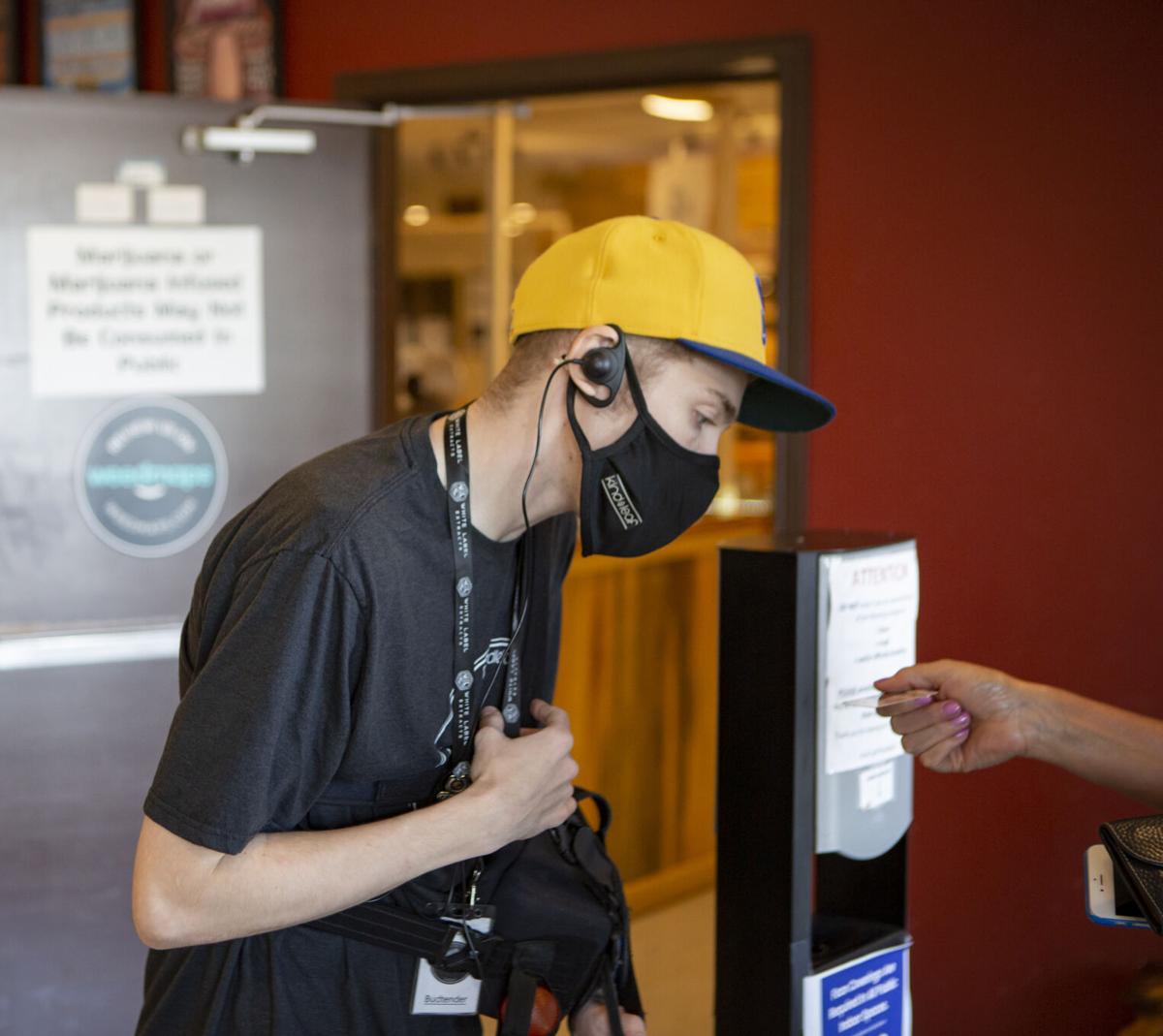 Signage on a plexiglass shield at the entrance to Kind Leaf Dispensary in Pendleton advises customers that they are required to wear a mask and be at least 21 years of age to enter the facility on Wednesday, July 22, 2020.

UMATILLA COUNTY — Checking identification is more complicated when everyone is wearing a mask, but local businesses say they’re making it work.

Brandon Krenzler at Kind Leaf Pendleton said most people are still recognizable from their photo, even with their mouth and nose obscured. But if staff do have a question, they’re allowed to ask the customer to step back 6 feet and briefly pull down their mask, since the employee’s own mask and a plastic sneeze guard at the counter provide other layers of protection.

“The masks do make it a little more difficult than usual, because we used to not even allow sunglasses or hats when people came in,” Krenzler said.

So far, he said, they haven’t seen anyone trying to use a mask to get away with using someone else’s ID.

For anyone who is opposed to wearing a mask or is worried about the risk of shopping indoors, the business now offers a walk-up window where people can be served outside the building.

Krenzler said the people who have given staff a hard time about the mask mandate have mostly been travelers from out of state. Signs posted around Kind Leaf, detailing the rule, remind people not to blame employees for the rule they didn’t make or hold up the line sharing political opinions about the mandate or Gov. Kate Brown.

He said the Oregon Liquor Control Commission has provided guidance for dispensaries during the pandemic, including how to handle the mask mandate. One rule change is that, since the DMV was closed for months, for now dispensaries can accept recently expired driver’s licenses.

“That would have gotten us in big trouble before,” he said.

The OLCC conducted inspections of 800 bars and restaurants over the Fourth of July weekend, according to a news release, including 75 on the east side of the state. Of those 800 inspections, investigators provided verbal guidance to 74 businesses on things that they needed to change, and in nine cases forwarded reports of significant violations on to the Occupational Safety and Health Administration for further review.

OSHA has the power to shut down or fine businesses that are not in compliance with workplace rules, including the mask mandate.

Jessica Narain, manager of the Hermiston Denny’s, said the restaurant was one of the ones that got inspected over the holiday weekend. She said the inspector sat at a table and observed for a while, and was “satisfied with our new procedures at work.”

Bryant Haley, a spokesman for the OLCC, said the most common verbal instructions that inspectors provided were around making sure customers wore masks and stayed 6 feet apart. He said OLCC inspectors continue to be busy working each weekend to inspect bars and restaurants, where they have found varying degrees of compliance.

“Some people see the gravity of where the industry is at; others are having trouble with that,” he said.

The pandemic has presented a tricky balance between protecting people’s physical health and protecting the financial health of businesses. If businesses are diligent about cleaning, masks and social distancing, Haley said, that helps “split the difference” by preventing outbreaks that could cause bars and restaurants to be shut down again.

In bars and restaurants, patrons are required to wear a mask while moving around the building, but they can take off the masks to eat and drink, which makes it easier to check IDs for those ordering alcoholic beverages.

At places like dispensaries, smoke shops, liquor stores or convenience stores, customers are meant to wear a mask the whole time unless they need to briefly be checked against their identification photo.

Brent Koo, owner of 11th Street Market in Hermiston, said he hasn’t had much of an issue identifying people so far. He said probably 80% of people who come into the market live nearby and “come here basically every day.”

More of a problem, he said, is people forgetting their mask in their car and needing reminded to go back out and grab the mask.

In days past, someone entering a convenience store in a mask would usually signal trouble. But Koo said he has gotten used to seeing people come in wearing a mask, and someone who is coming in to commit a robbery would usually come in with a different demeanor than someone just coming in to shop.

“We would recognize that,” he said.