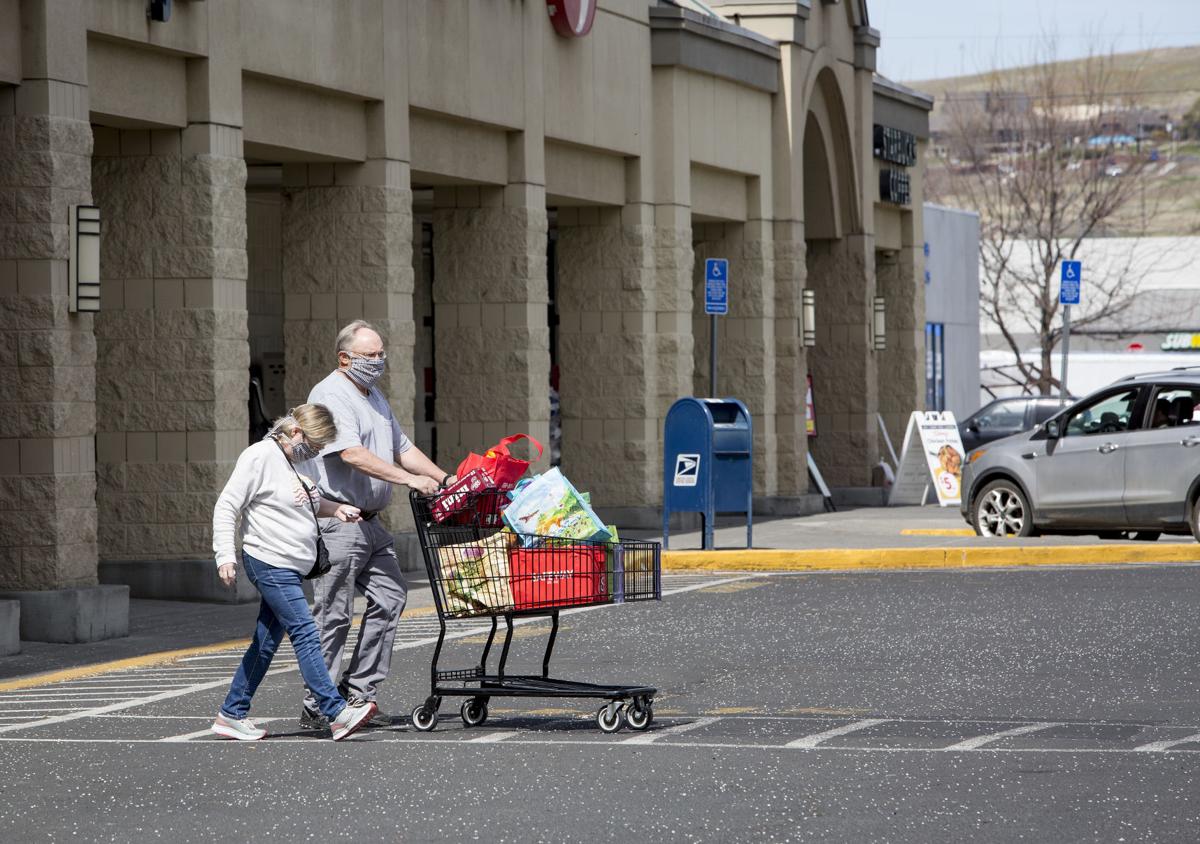 Shoppers wearing masks depart Safeway in Pendleton in early April. On Monday, June 29, 2020 Gov. Kate Brown announced that beginning Wednesday, July 1, all Oregonians will be required to wear a mask when in an indoor public space. 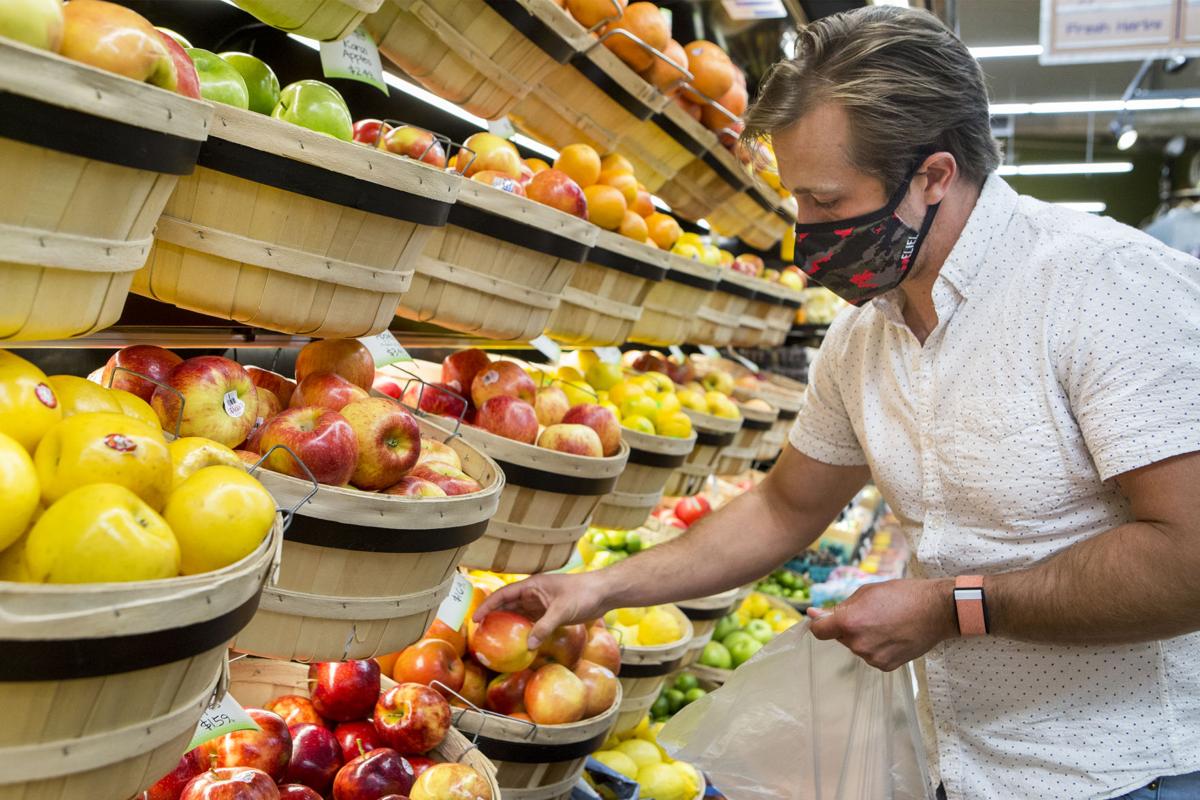 Dominick DeLeone, of Bend, fills a bag with apples while shopping in the produce section at Newport Avenue Market in Bend.

Shoppers wearing masks depart Safeway in Pendleton in early April. On Monday, June 29, 2020 Gov. Kate Brown announced that beginning Wednesday, July 1, all Oregonians will be required to wear a mask when in an indoor public space.

Dominick DeLeone, of Bend, fills a bag with apples while shopping in the produce section at Newport Avenue Market in Bend.

“Over the last month, we have seen the disease spread at an alarming rate in both urban and rural counties,” Brown said in a statement announcing the mask order.

While state officials expected to see an increase in positive cases following the lifting of restrictions “reopening” the state, the rate of increase comes as the state heads into the Fourth of July holiday weekend, which Brown called “a critical point” in the pandemic.Given spiking case numbers in Oregon, Washington and California, Umatilla County Commissioner George Murdock said he wasn’t surprised by the governor’s new order.

Murdock, who oversees the county’s public health department, said he plans to comply with the governor’s order, adding that he’s taking his cues from Umatilla County Public Health Officer Jonathan Hitzman, who he said has supported mask use as a way for residents to protect themselves and others.

Pendleton Mayor John Turner thought it was “prudent” to require face masks, especially when the alternative might be to revert Umatilla County back to a Phase 1 reopening plan, a move he said would hurt the local economy.

The mandate is already required in eight counties, including Multnomah, Marion, Polk and Washington counties. The move aligns Oregon with neighboring California, which has ordered masks be worn indoors.

Oregon Occupational Safety and Health will take the lead in enforcing face covering requirements, along with other state and local agencies, Brown said. The governor has repeatedly said she did not want to use a heavy hand in enforcement, hoping that Oregonians would voluntarily follow the face covering edicts.

Turner thought most Pendletonians would comply with the order and would apply enough peer pressure to effectively police themselves.

While the state is tasking itself with enforcing the new rule, Shafer said he hopes Umatilla County Sheriff’s Office won’t be called in to assist since deputies are already busy enough with their everyday law enforcement duties.

“Modeling from the Oregon Health Authority shows that if we don’t take further action to reduce the spread of the disease, our hospitals could be overwhelmed by new COVID-19 cases and hospitalizations within weeks,” Brown said in the release. “The choices every single one of us make in the coming days matter.”

Even top national health experts are unsure that Americans will heed the advice.

Dr. Anthony Fauci, the top U.S. infectious-disease expert, said earlier this week that he was concerned at attitudes in the country that have made wearing masks into a political issue.

“One of the problems we face in the United States is that unfortunately, there is a combination of an anti-science bias that people are — for reasons that sometimes are, you know, inconceivable and not understandable — they just don’t believe science and they don’t believe authority,” Fauci said on a podcast from the U.S. Department of Health and Human Services.

Fauci stopped short of directly criticizing President Donald Trump, who has refused to wear a mask in public despite pleas from public health agencies that he model the behavior they say is needed to defeat the virus.

The Oregon Health Authority has used forecasts provided by the Institute of Disease Modeling to create a trio of scenarios of the growth of infections: optimistic, moderate and pessimistic.

In recent days, state epidemiologists have said they were aiming to stay within the moderate scenario in which COVID-19 cases would rise to about 900 a day. Daily hospitalizations would go to 27 per day.

The worry has been that the state would trend toward the worst case scenario — “pessimistic” — in which new cases could spike to more than 4,800 per day and 82 new patients would need hospitalization each day.

The optimistic scenario saw cases remain at about 180 new daily cases. But Oregon has already passed 200 cases in a day, with all but one of the highest number of daily cases occurring in the past two weeks.

Oregon joins a growing number of states that are backtracking on “reopening” amid a surge of new COVID-19 cases. Only two states — Rhode Island and Connecticut — have not shown a rise in coronavirus infections in the past week, according to the Centers for Disease Control. Florida, Texas and Arizona — three states that quickly reopened businesses in recent weeks — are showing the sharpest increases.

Oregon health officials have also been concerned about the rise in cases that cannot be traced to a known source. This is an indicator of “community spread,” in which the virus is spreading from casual contacts among numerous people.

As of June 27, Oregon’s overall positive testing rate was 4.3% of tests performed. That’s much lower than the national average of 9%. But with the rate rising, state officials decided it was time to act.

Oregon has reported 8,485 positive cases, though officials believe the real number is much higher because many people who are infected do not show symptoms or have delayed symptoms. The virus has killed 204 people in Oregon.

Less than 1% of those under 50 who are infected have died from the virus. Fatalities increase rapidly with age, with 20% who are 75 and older dying.

A New York Times statistical analysis reported this week that 54,000 of the deaths in the United States — 43% — are tied to nursing homes and long-term care facilities.

UMATILLA COUNTY — Amid the ongoing surge of COVID-19 cases locally and across the state, the Umatilla County Board of Commissioners voted unan…