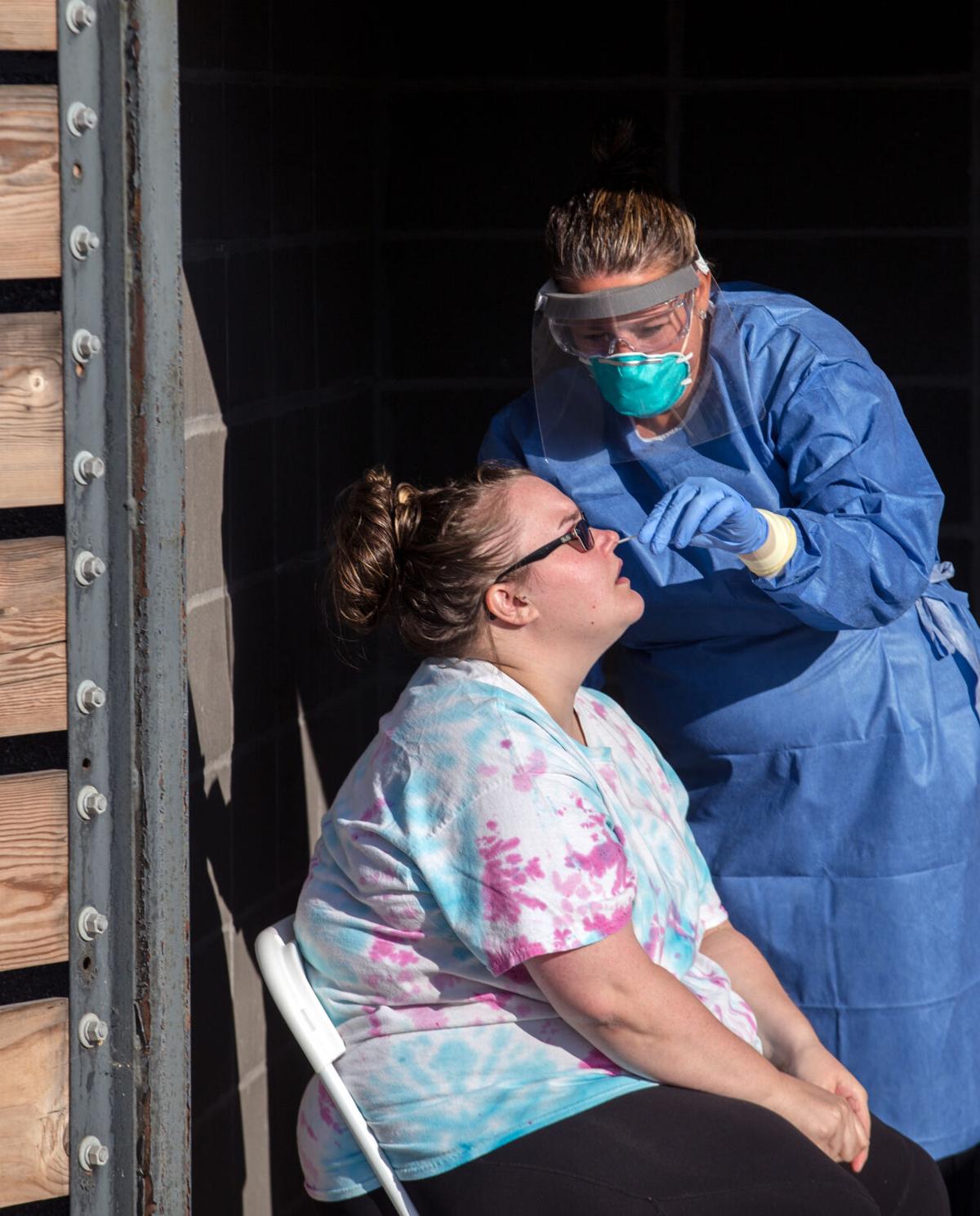 Registered nurse Megan Wilson, of St. Anthony Hospital, inserts a swab into Piper Shane’s nasal passage to collect a sample for COVID testing on Tuesday, Aug. 4, 2020. The procedure takes place in a special shed in the St. Anthony Hospital parking that is reserved for testing. Patients wait in their cars until they are summoned. 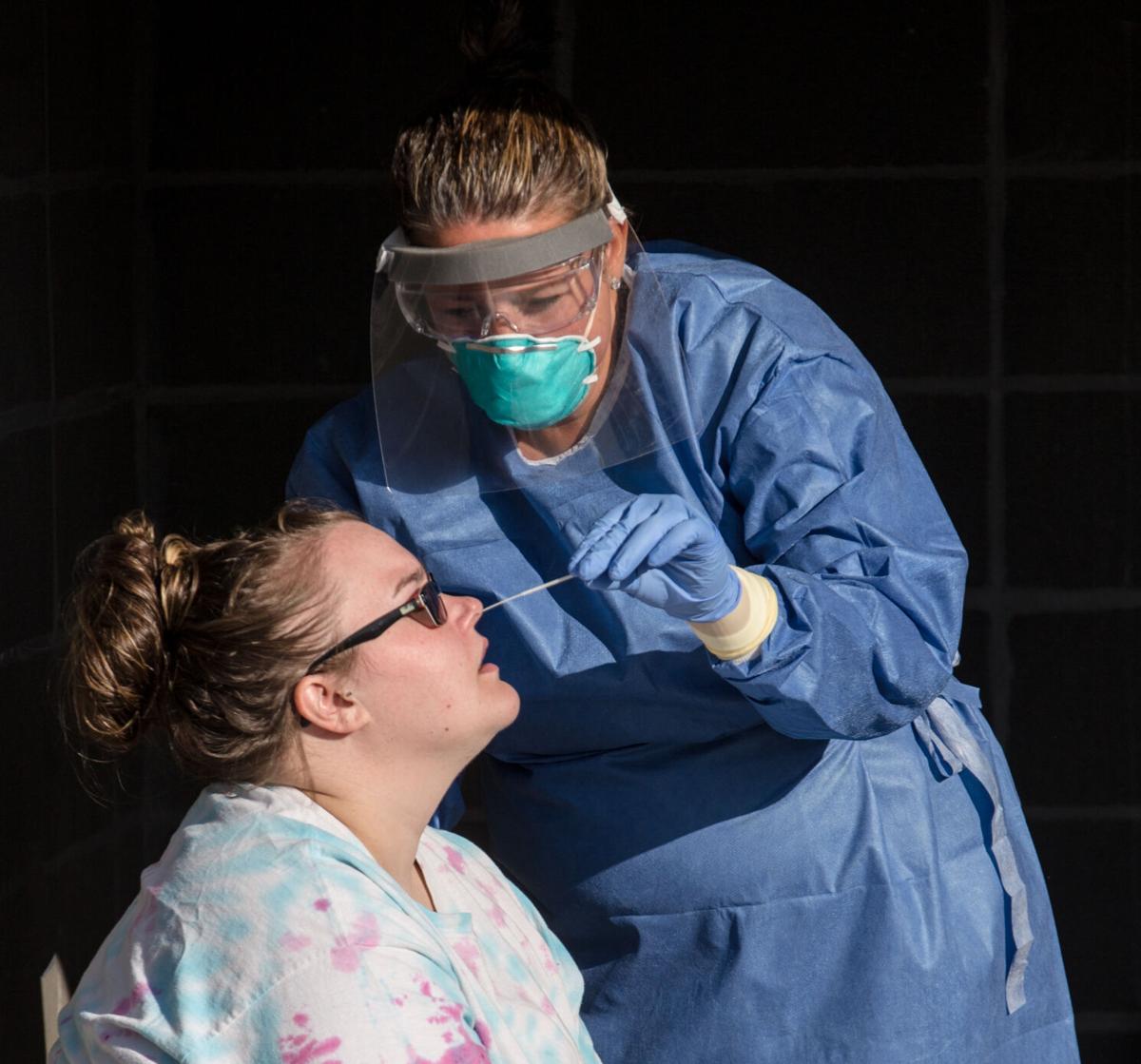 Registered nurse Megan Wilson, of St. Anthony Hospital, inserts a swab into Piper Shane’s nasal passage to collect a sample for COVID testing on Tuesday, Aug. 4, 2020. The procedure takes place in a special shed in the St. Anthony Hospital parking lot that is reserved for testing. Patients wait in their cars until they are summoned. 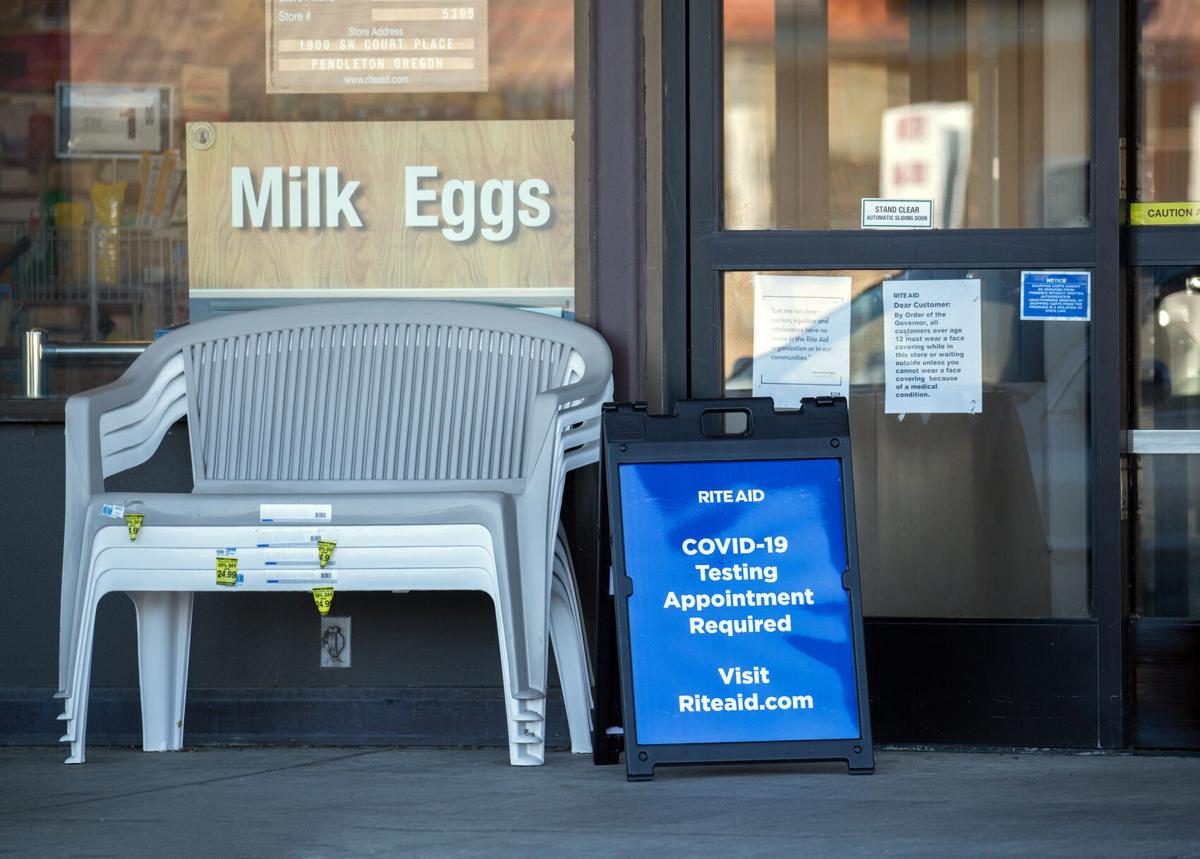 A sign at the Pendleton Rite Aid informs customers about testing available at the store.

Registered nurse Megan Wilson, of St. Anthony Hospital, inserts a swab into Piper Shane’s nasal passage to collect a sample for COVID testing on Tuesday, Aug. 4, 2020. The procedure takes place in a special shed in the St. Anthony Hospital parking that is reserved for testing. Patients wait in their cars until they are summoned.

Registered nurse Megan Wilson, of St. Anthony Hospital, inserts a swab into Piper Shane’s nasal passage to collect a sample for COVID testing on Tuesday, Aug. 4, 2020. The procedure takes place in a special shed in the St. Anthony Hospital parking lot that is reserved for testing. Patients wait in their cars until they are summoned.

A sign at the Pendleton Rite Aid informs customers about testing available at the store.

UMATILLA COUNTY — Data indicates not enough testing is being done to address the COVID-19 epidemic within Umatilla County, but supply shortages plaguing the entire country are threatening the ability to expand testing to meet the local need.

Though the Oregon Health Authority lists Umatilla County fifth in Oregon for total tests per capita, one of the primary factors in the state’s decision to move the county back to the baseline of reopening on July 31 was its alarming test positivity percentage of 23% in the prior week.

According to numbers provided by the Umatilla County Public Health Department, just over 18% of the county’s total COVID-19 tests have been positive as of Wednesday, Aug. 5.

Public health experts have said a positive test rate of 5% or under is the most reliable indicator for whether a government is testing enough people for COVID-19, and the state is requiring counties to reach that benchmark in order for children to return to in-person schooling.

According to John Hopkins University School of Medicine’s Coronavirus Resource Center, in order for governments to identify new cases and effectively respond to the pandemic through tracing and treatment, testing programs should be scaled to the size of their epidemic, not the size of the population. A high rate of positive tests indicates a government is only testing the sickest patients who seek out medical attention and is not casting a wide enough net.

Supply shortages have required the nation’s largest labs to freeze samples to wait to be tested, at times delaying the individual being tested from knowing the results more than a week after they had a sample taken.

Interpath Laboratories’ facility in Pendleton is one of the company’s two labs in the Pacific Northwest that can conduct on-site testing for the virus. The lab runs samples throughout the region and has advertised a turnaround time of one to four days.

“Many of us have the equipment to perform the testing, it’s just getting the reagent. That’s the part that’s holding everyone up,” said Judy Kennedy, marketing director for Interpath. “The demand is more than the nationwide shortage can produce. Every lab out there is running into this problem.”

Kennedy said the lab has maintained turnaround times within that span. But local providers, who contract with Interpath, have noticed more frequently those turnaround times are slipping into the latter part of that window, and occasionally outside of it altogether.

“We were getting a 24-hour turnaround (on results) but with the outbreaks in places like Florida and Texas supplies ran low, and now it’s been more like 72 hours,” said Jolene Horning, practice manager at Family Health Associates in Hermiston.

Some select providers, such as Good Shepherd Hospital in Hermiston, have access to a limited supply of rapid tests that can return reliable results within four hours of a sample being taken.

According to Dr. Jon Hitzman, the county health officer who also practices at Pendleton Family Medicine, delays in test result turnaround times are exacerbated by the virus’ incubation period that allows it to spread as early as two days before symptoms begin to show.

But to avoid depleting the testing supplies that are available and potentially delaying turnaround times for results even longer, many providers only issue testing for patients who are showing symptoms or have a known exposure to someone else who tested positive for the virus.

Since beginning to offer testing for the virus on May 19, Interpath has advised its contracted clinicians to follow these prioritization guidelines for issuing tests, in accordance with guidance from the Centers for Disease Control and Prevention.

“We’re hoping that the providers that we do have from all over the Pacific Northwest are judicious about it and are testing the people that need to be tested,” Kennedy said.

While the outbreak in Umatilla County may need that local testing criteria to expand, the limited resources and usual practice of the physicians deciding whether an individual can be tested or not makes it difficult to do so.

“As physicians we’re trained to see people, take their history, do a physical exam and try to do our testing geared toward proving or disproving certain diagnoses,” Hitzman said. “We don’t just do tests on people for the sake of doing tests.”

A large scale and affordable testing event sponsored by state or local governments could take that problem off the plate of local physicians. But Murdock has claimed the county doesn’t have the capacity to coordinate such an event, and concerns are shared by public officials, health care providers and the labs that those events will only strain more resources and add to delays in turnaround times.

“I’d love to just test everybody and know exactly how many people in the county have the virus if I could, but we just don’t have the resources for that,” Hitzman said.

Gov. Kate Brown told the EO Media Group in a July 31 interview that she’s spoken with the U.S. Department of Health and Human Services and members of Congress about the need for more testing capacity but the current national shortages are complicating those efforts, meaning additional testing resources from the state are unlikely at the moment.

Without expanding testing access, case data will continue to not be reflective of the virus’ true spread in the community while those who don’t know they’re carrying the virus may spread it to others, who in turn won’t know they’ve been exposed and will only be able to be tested if they begin to show symptoms.

The vicious cycle complicates the ability to lower the positive test percentage metric referenced to re-close Umatilla County businesses and will be used to keep children from in-person instruction.

Manufacturers of the needed testing supplies are in the process of ramping up production, but shortages and backlogs may take months to correct and overcome.

In the meantime, the public health infrastructure in place for COVID-19 testing is falling short of Umatilla County’s needs, and no quick solution appears to be on the horizon from federal, state or local governments.

MISSION — A Good Shepherd Health Care System doctor questioned the need for the latest COVID-19 shutdown, and linked the spread of the virus t…