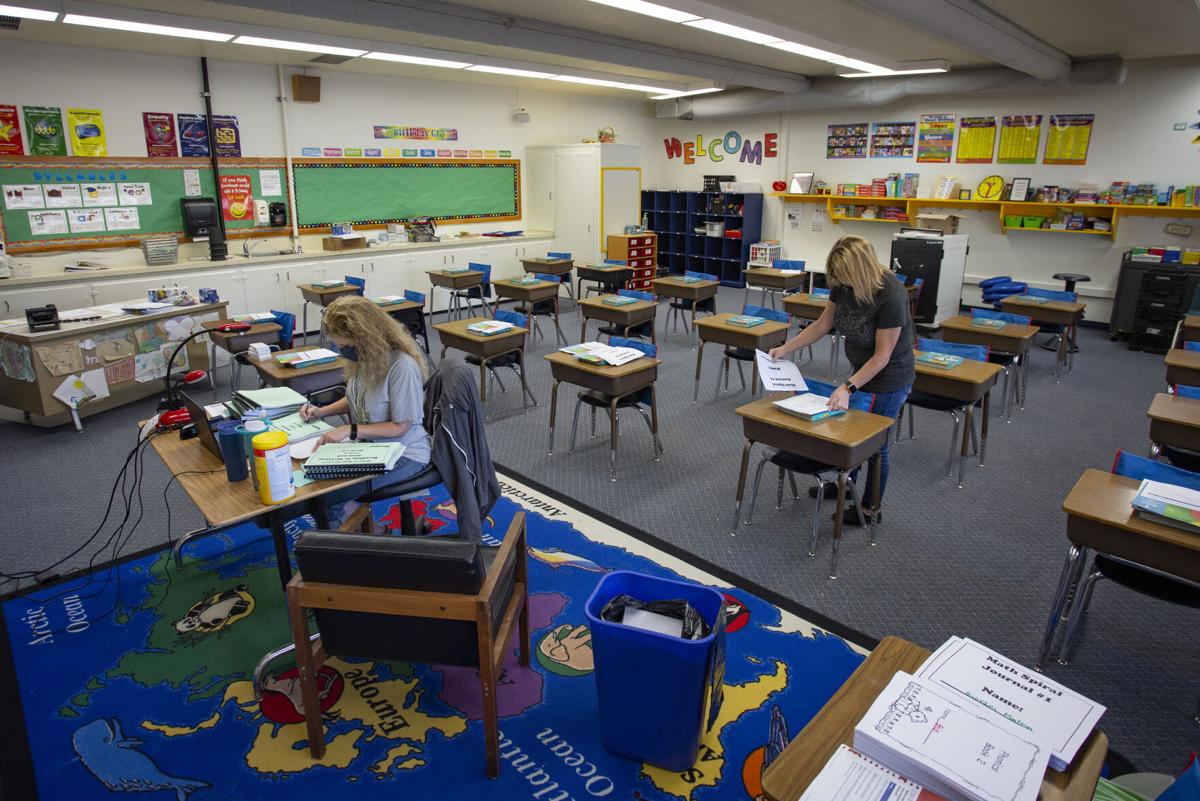 Echo School District second grade teacher Billie Parker, left, prepares reading and writing journals for her students as teaching assistant Been Magnuson sets out student materials ahead of student pickup on Aug. 19, 2020. Like most school districts in the state, the Echo School District will begin the school year with distance education. 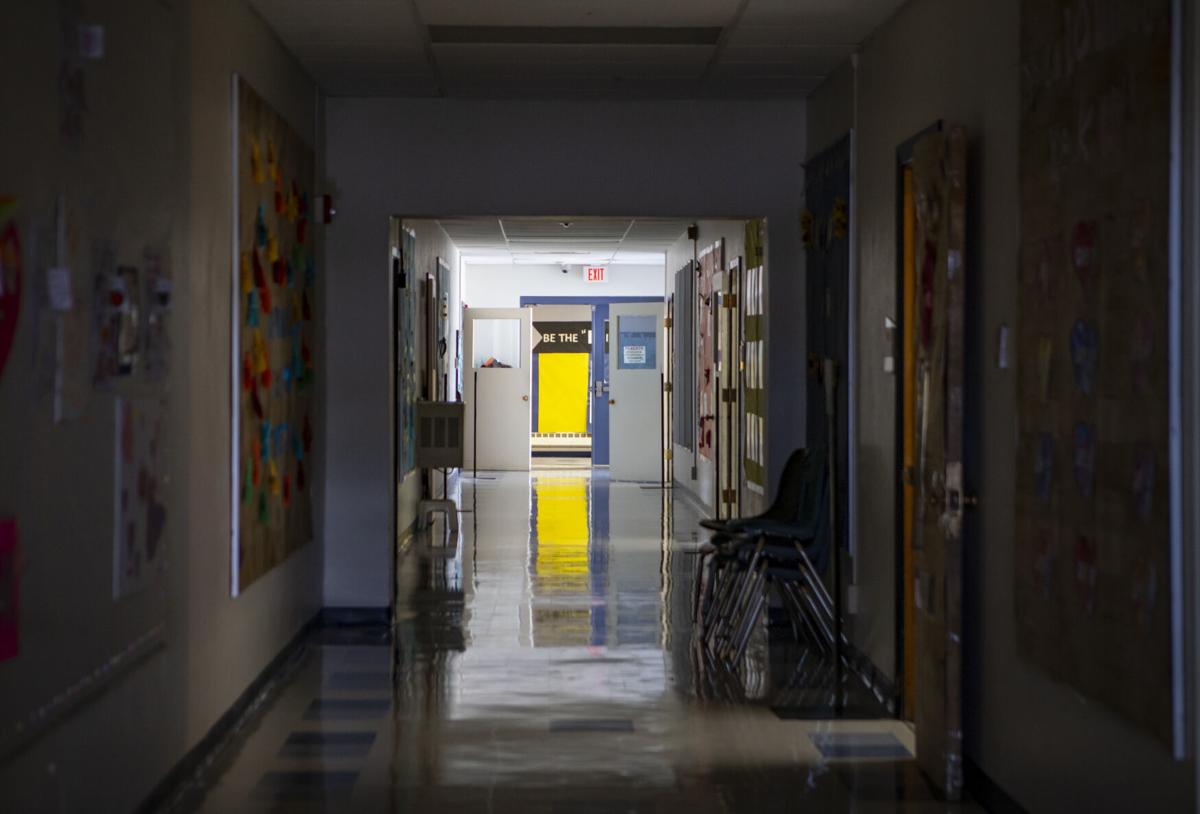 Light from classrooms spills into the darkened hallways at the Echo School District building as teachers prepare their classrooms and materials for remote learning on Wednesday, Aug. 19, 2020. 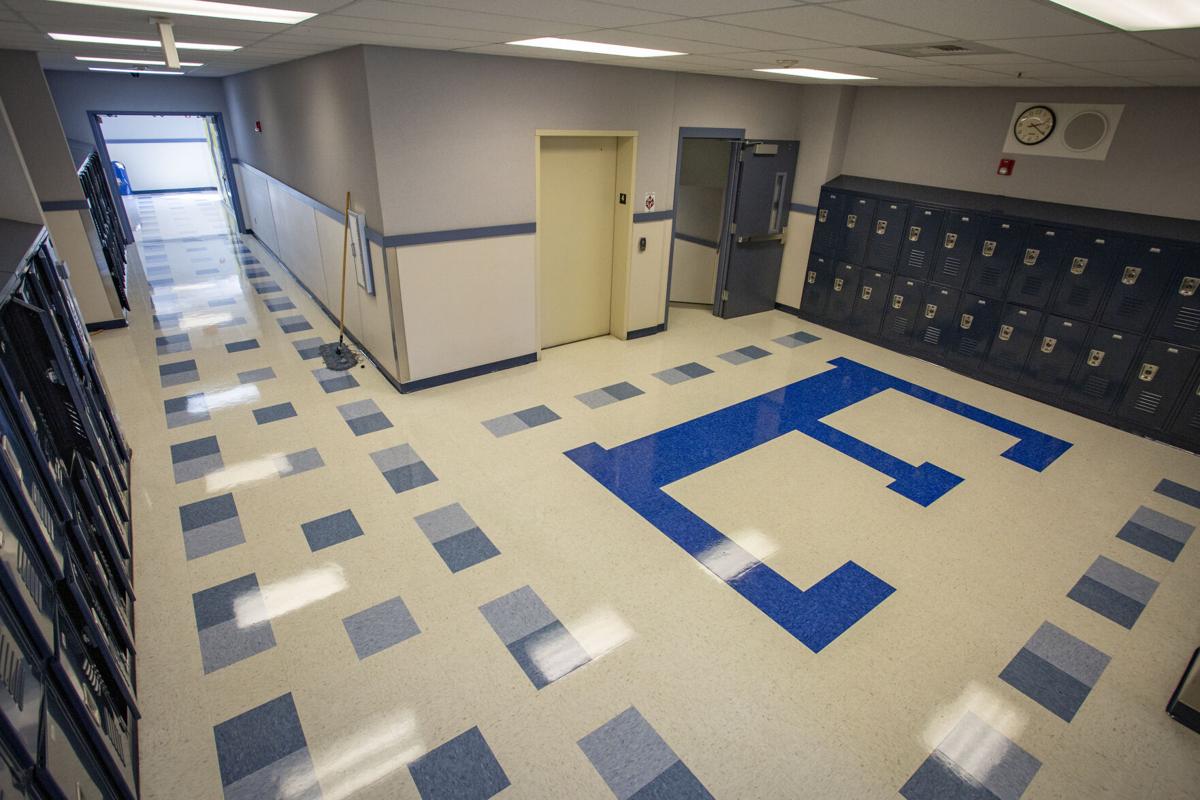 Echo School District second grade teacher Billie Parker, left, prepares reading and writing journals for her students as teaching assistant Been Magnuson sets out student materials ahead of student pickup on Aug. 19, 2020. Like most school districts in the state, the Echo School District will begin the school year with distance education.

Light from classrooms spills into the darkened hallways at the Echo School District building as teachers prepare their classrooms and materials for remote learning on Wednesday, Aug. 19, 2020.

UKIAH — Eastern Oregon has some of the smallest school districts in the state, but most are still too big to get around the state’s distance learning requirements.

Gov. Kate Brown recently announced that small schools that met certain criteria would be able to reopen during the COVID-19 pandemic, even as most schools are forced to start the year online. Additionally, schools are now allowed to bring in small groups of students a few times per week to accommodate programs like special education or career technical education.

The Oregon Department of Education gave the Ukiah School District the green light to fully reopen their school, but other small districts like Helix, Echo and Ione won’t see their situations change much.

Located near the southern edge of Umatilla County and small enough to house its entire student body in a single schoolhouse, Ukiah School Principal Norma Barber said the district was able to open up its doors because it met the state’s narrow criteria: The community had no reported COVID-19 cases, its total enrollment was less than 100 students and its school was more than 8 miles away from any other school.

Barber said staff is excited to see students’ masked faces, if not their smiles, and is aware that the situation could change should COVID-19 spread into their community.

Although Ukiah students will return to the classroom, Barber said the school day will still look much different.

Barber said the district will limit classes to 10 children and students’ start times and end times will be staggered to avoid too many students from congregating in any one place.

But among Umatilla and Morrow counties’ smallest districts, only Ukiah was able to qualify for the in-person exemption.

The local COVID-19 epidemics within the larger pandemic show that there’s a disparity between the two counties’ small and large communities.

The Hermiston area has reported more than 1,300 coronavirus cases while Pendleton and Umatilla have each recorded hundreds of cases. In comparison, Echo has reported 14 cases and Helix doesn’t have enough people in its ZIP code to have cases attributed to it. Morrow County is similar: More than 9 in 10 COVID-19 cases have come from Boardman or Irrigon while Ione only has one case.

But most districts aren’t rural or remote enough to obtain the state’s exemption.

Helix Superintendent Darrick Cope said the new rules won’t change his district’s situation, and the Echo and Ione school districts will also plan to start their year with distance learning.

One issue for rural districts last year was a lack of internet access in the more remote corners of their boundaries.

Echo Superintendent Raymon Smith said 90% of the district’s students had adequate internet access, but the school system still needed to work with a handful of students from the Rieth area who can’t get cellphone signal, much less broadband.

Ione Superintendent Rollie Marshall said the district recently purchased technology that will allow them to upload distance learning material onto flash drives that can then be distributed to internet-less students.

'I wouldn't put much money on that,' county health director says most schools unlikely to reopen in 2020

UMATILLA COUNTY — Oregon schools won’t be able to reopen for in-person instruction for roughly 200 days, and more restrictions may be coming f…