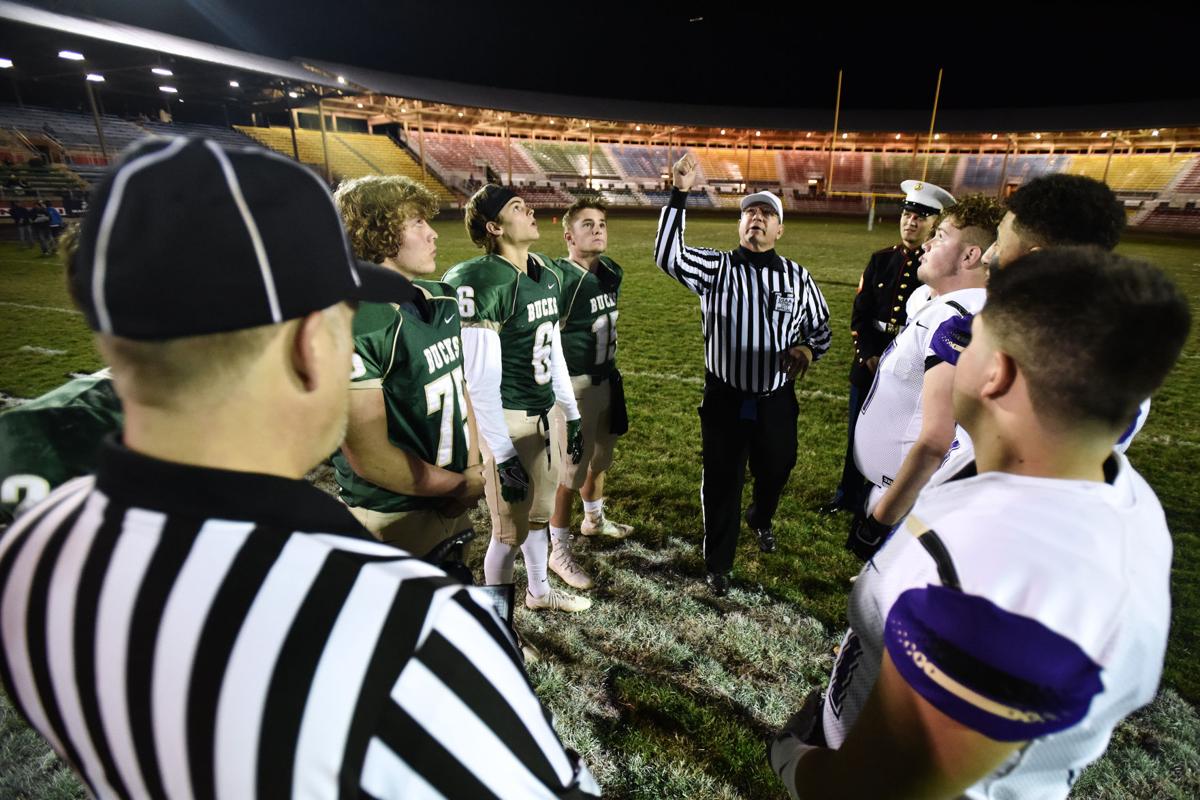 Official Tom Humphreys throws the coin during the opening coin toss of Hermiston’s 42-15 win against Pendleton on October 27, 2017, in Pendleton. 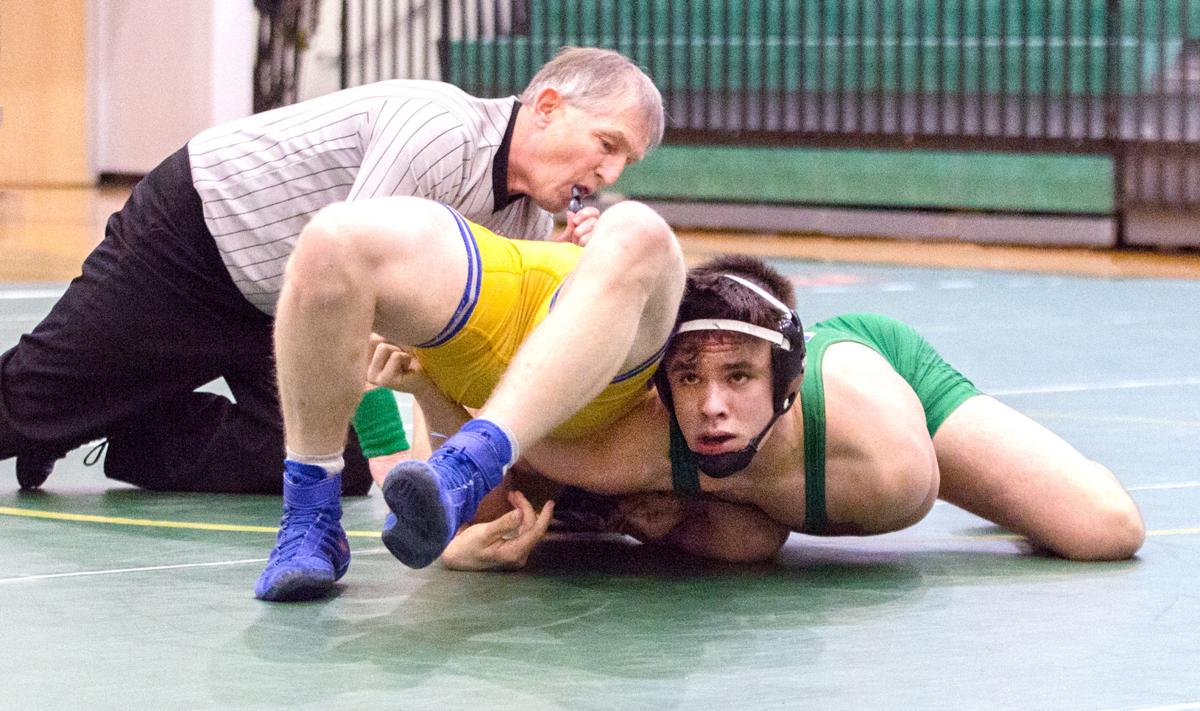 Official Tom Humphreys throws the coin during the opening coin toss of Hermiston’s 42-15 win against Pendleton on October 27, 2017, in Pendleton.

PENDLETON — While gym doors on school grounds continue to remain closed, every component of Oregon high school athletics are in the midst of a transitional phase.

After the Oregon School Activities Association had a virtual meeting on Dec. 7, all eyes are now fixed on February 2021, when the start of high school sports is currently scheduled to begin.

For Jack Folliard, Oregon Athletic Officials Association executive director, said he knows the decisions the OSAA Executive Board has been making haven’t been easy.

“In terms of what the leadership of the OSAA has to decide in getting kids back to school and getting activities going that is the most important thing,” he said.

Prior to the pandemic, the biggest problem that was common across the high school level all over the country was the lack of numbers. Here in the state of Oregon, the loss of numbers has been felt over the past decade for a number of reasons.

“Oregon isn’t unique, this is the way it is all across the United States particularly at the high school level,” Folliard said. “When you first start officiating in high school, you are going to work 4 p.m. games, you know freshman games and you have to have a special type of job that will get you off work at 2:30 p.m. or 3 p.m. to go get your uniform, get ready to go and drive to a school site.”

So, the commitment to officiating has been a challenge, and the numbers reflect that issue. In the past decade, according to a report by the OSAA and Oregon Athletic Officials Association, they saw a decrease in officials to work games per year in sports like football (2.2%), basketball (2.5%), baseball (3.2 %) and softball (3.2%), which were only registered but didn’t officiate due to spring sports being canceled. So, when there was a proposed idea to have spring and winter play at the same time during the Dec. 7 OSAA meeting, Folliard had to make his case that if his officials were forced to pick which sports to work, his numbers were going to take a hit.

“If you stack sports, then a lot of our officials work more than one sport then they would have to pick and choose,” he said. “It would reduce our numbers in any particular sport.”

This stacked season model gained no support among the board, and the other proposal, which moved the winter sports season to the end of the year instead was approved. Though faced with this change, Folliard doesn’t know what to expect for officials, especially with schedule conflicts that may come for winter sports.

“The only thing that I could think of, let’s just say you are a longtime basketball official, and you get use to working in December, January, February, March, would that mean with it being later you would not work, I don’t think so but I don’t know so,” he said.

Now that sports will not be set to returning until February 2021, this gives all parties involved more time for sporting events to become more safe for them to occur, but officials need at least an entire month to prepare for if that day comes, according to Folliard.

“We typically start preparing for a season at least a month before it starts, you don’t want to start training too early,” he said. “You want to have your training meetings on court and on the field, and you want to have them occur relatively close to the season. Now that we do have start dates, and hopefully those start dates will hold, we are all kind of waiting (to see) what the OSAA was allowed to do.”

The COVID-19 pandemic has caused other problems for Folliard on two different fronts. Keeping safety in mind, Folliard intends for officials to be safe while working events, and lessen the physical interaction among people so they can be safe.

“COVID-19 is so new that we don’t know if that is going to be something that officials would not want to work either existing officials or new officials because of exposure,” he said. “The schools are really doing a great job making sure we are very well protected in respect to any COVID-19 exposure and they understand fully that we are essential to the contest. We ourselves will take care of ourselves.”

Since sports have been postponed since the pandemic started in March, Folliard intends to ramp up on the recruitment process when the tentative start date for sports becomes more of a possibility.

“We haven’t really cranked up big time recruiting, because we didn’t know when the seasons would start,” he said. “You don’t want to recruit too early, so we will start working on that, one of the things about numbers is natural attrition anyways, and that trend has been going down the last several years.”

Though numbers have slowly dropped, and the pandemic isn’t making things any better, Folliard knows what officiating can bring to the table. It can be a form of employment, a way to give back to a sport you enjoy, and the friendships you can make along the way.

“It’s the camaraderie, I have lifelong friends up and down the West Coast that I would not have but for officiating,” he said.

When the recruitment process begins, Folliard is hopeful that they will see some new faces ready to officiate contests when sports are set to return.

“Our motto is, without officials it’s only recess,” he said.

For those interested in more information, people can go to the OAOA website, www.oreofficials.org/. Those that would be interested in becoming an official are encouraged to go to www.newofficials.org, where they fill out their information, list their sports preferences, and then will be contacted by the commissioner of those local organizations in charge of officiating, and will work with them further to sign up.