A sign advertises COVID-19 testing at the Pendleton Convention Center during a testing event sponsored by CHI St. Anthony Hospital on Feb. 8, 2021. 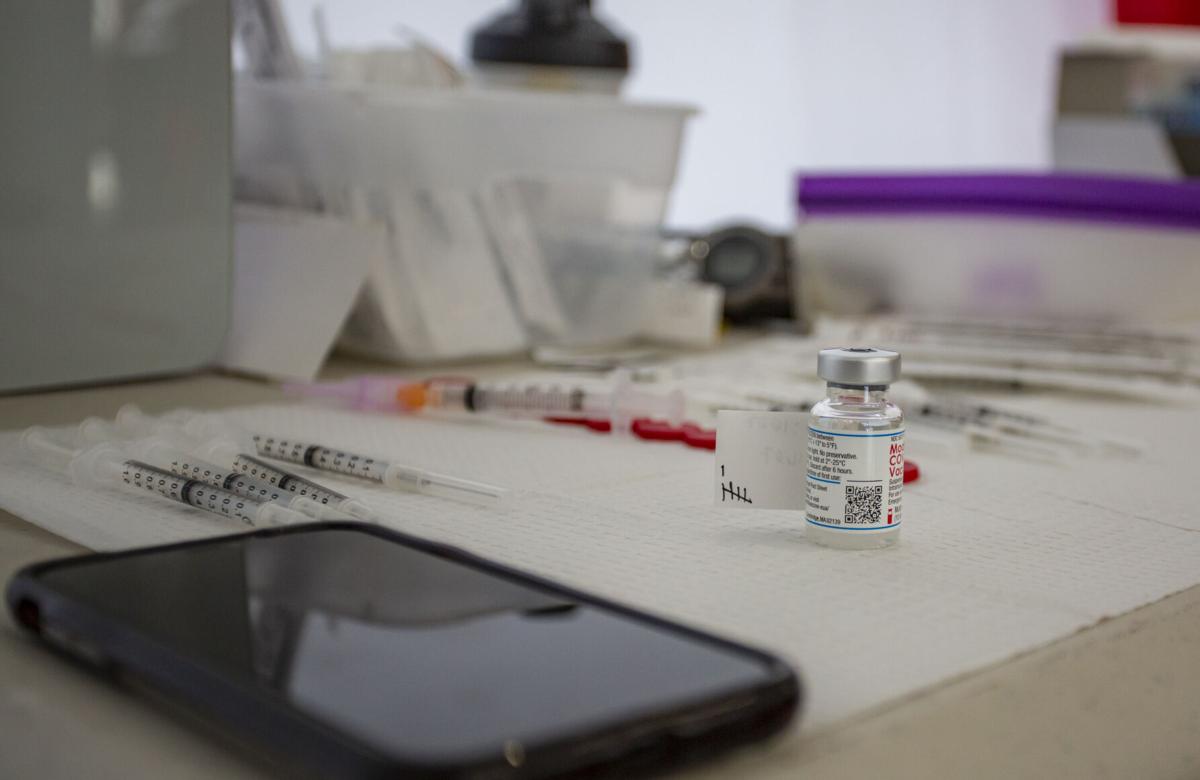 A vial of the Moderna COVID-19 vaccine sits on a table at a mass vaccination site in Pendleton on March 26, 2021.

A sign advertises COVID-19 testing at the Pendleton Convention Center during a testing event sponsored by CHI St. Anthony Hospital on Feb. 8, 2021.

A vial of the Moderna COVID-19 vaccine sits on a table at a mass vaccination site in Pendleton on March 26, 2021.

SALEM — Oregon’s seen the biggest increase in COVID-19 cases the past two weeks of any state in the country.

“A few weeks ago, I came before you to say that we were concerned we would have a fourth surge of COVID-19 in Oregon,” Gov. Kate Brown said at a Friday, April 23, press conference. “Unfortunately, today, that surge is here.”

Not enough people have been vaccinated and adherence to public health guidelines has fallen off a cliff, giving rise to virus transmission rates rivaling the worst days of the pandemic this winter.

Oregon state epidemiologist Dr. Dean Sidelinger called it the “most pessimistic scenario.” COVID-19 has continued its rapid spread this spring and, once again, threatens to overrun hospitals throughout the state.

“Our newest modeling indicates that the rate of transmission surpassed the most pessimistic scenario of three weeks ago,” Sidelinger said. “And if that spread continues unabated, our hospitals risk being swamped by virus-stricken patients.”

More than half the state’s counties are now considered “high risk” for COVID-19 transmission. Hotspots range from metro counties like Washington and Multnomah to more sparsely populated ones like Grant and Klamath.

Spread is so bad in some counties that they qualify for Oregon’s “extreme risk” category, in which indoor dining is banned and indoor capacity at gyms, retail stores and other businesses is extremely limited. State health officials said on April 23 they’re even considering a pause on elective surgeries similar to the pandemic’s early days.

Brown said she will reopen the extreme risk bucket as hospitals fill up — and could put several counties in that category as soon as next week.

The governor set the threshold for reopening the extreme risk category at 300 people hospitalized with COVID-19; the state had 283 COVID-19 patients in hospitals as of April 23.

Inoculation for COVID-19 has hummed along in Oregon. Half of the state’s adult population has received at least one dose, and more than 1 million Oregonians are fully vaccinated.

That’s despite a nationwide pause on administration of the Johnson & Johnson vaccine due to six cases of extremely rare blood clots in women who received the shot.

The Centers for Disease Control and Prevention has launched an investigation into the case of an Oregon woman who died two weeks after receiving the Johnson & Johnson vaccine. The Oregon Health Authority does not know if there is a causal connection between the vaccine and the woman’s death.

Still, The New York Times reports federal officials appear to be inching closer to lifting the Johnson & Johnson moratorium as cases of clots have remained uncommon.

Vaccines from Pfizer-BioNTech and Moderna have remained available throughout the pause and thousands of Oregonians are getting vaccinated each day.

OHA director Patrick Allen said, at its current daily inoculation rate, 80% of Oregon adults could receive a first dose of vaccine by July 4.

“Sustaining that pace depends on Oregonians continuing to choose to get vaccinated,” he said.

Oregon has reported more than 178,000 coronavirus cases since the pandemic began and 2,484 related deaths.

SALEM — Umatilla County could move back to the high coronavirus risk category as it begins a “two-week caution period” starting Friday, April …