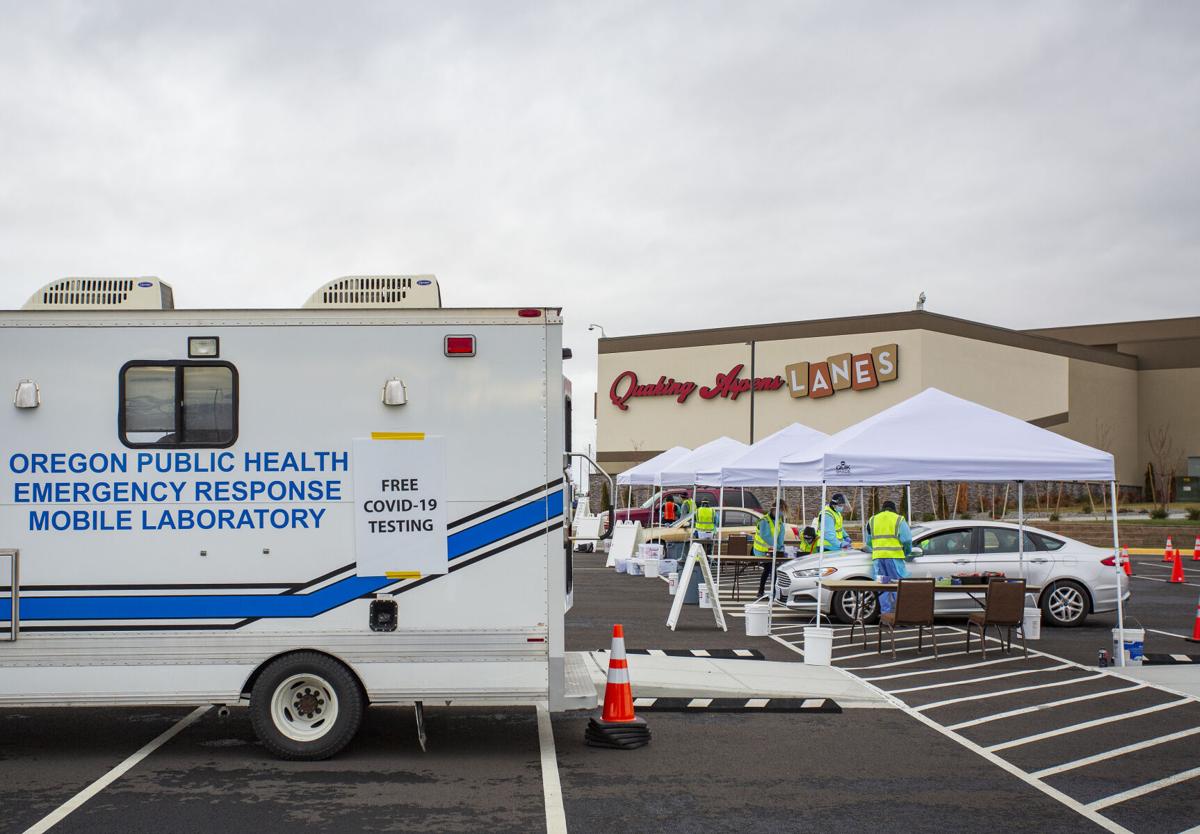 Cars pass through a drive-thru COVID-19 testing event at Wildhorse Resort & Casino in Mission on Dec. 17, 2020. 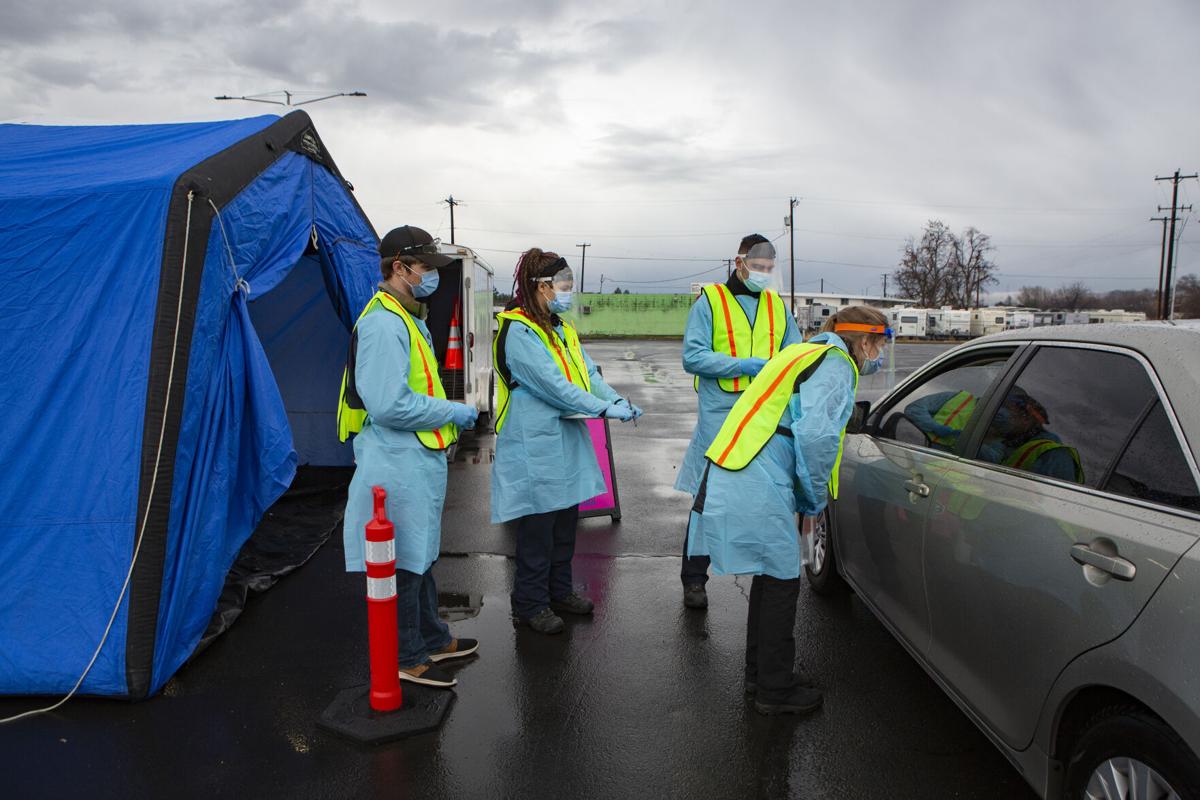 Testing staff instruct a driver on how to self-administer a COVID-19 test during a drive-thru testing event at the Pendleton Convention Center on Wednesday, Dec. 30, 2020. Roughly 50 people were preregistered for the event, though preregistration was not required for a test.

Cars pass through a drive-thru COVID-19 testing event at Wildhorse Resort & Casino in Mission on Dec. 17, 2020.

Testing staff instruct a driver on how to self-administer a COVID-19 test during a drive-thru testing event at the Pendleton Convention Center on Wednesday, Dec. 30, 2020. Roughly 50 people were preregistered for the event, though preregistration was not required for a test.

SALEM — After a brief lull in daily new cases of COVID-19 provided a momentary respite from the unrelenting march of the pandemic early in the new year, Oregonians now face a projected rise in infections and deaths over the coming months on an unprecedented scale.

That’s according to the most recent modeling from the Oregon Health Authority, which predicted a return to exponential spread, and the Institute for Health Metrics and Evaluation, which anticipated Oregon’s COVID-19 death toll will more than triple by April 1.

That rate of spread would lead to an average of 1,780 new cases and 85 hospitalizations per day by Jan. 26. Notably, the Oregon Health Authority’s prediction does not account for a possible rise in the infection rate due to spread during the Christmas and New Year’s holidays.

“These projections would look even more dire if the actual transmission level increased beyond 1.29 around Christmas and New Year’s Eve,” the OHA stated in its modeling report.

The OHA’s modeling also does not account for any potential dampening effects of COVID-19 vaccination in the state. While vaccination efforts have lagged far behind earlier goals, 115,060 people in Oregon’s high-risk populations had received at least one injection of a vaccine as of Tuesday, Jan. 12.

The Health Authority’s modeling also projected a potential scenario in which people became more adherent to COVID-19 prevention measures, such as mask wearing and social distancing. In that scenario, transmission rates dropped to 0.9 and new daily cases by Jan. 26 would average out at 1,400.

That scenario appears to be unlikely, however. Local daily cases in the new year jumped back into double-digit figures and statewide daily new cases have approached the 2,000 mark once again, indicating a post-holiday spike is likely occurring.

While the OHA’s modeling does not extend past the end of January, modeling from the Institute for Health Metrics and Evaluation reaches into the coming months, and it predicts an outcome startling and dark.

It is important to note the IHME new daily case totals are estimates of all COVID-19 cases in Oregon, including those not tested. The OHA totals include only cases of COVID-19 that have resulted in a positive test or are presumptive positive cases, meaning there is a significant disparity between the numbers each organization produces.

The IHME’s modeling of what it calls the “most likely” scenario predicts Oregon’s death toll could more than triple from 1,667 on Jan. 12 to 5,011 by April 1.

The same modeling put the average number of new cases projected for Saturday, Jan. 9 at 1,814, which is relatively close to the number of cases the Oregon Health Authority reported that day at 1,643, though daily cases tapered off to 939 by Jan. 11.

The Institute also projected that demand for intensive care unit beds in Oregon, due to COVID-19, would exceed the state’s capacity on Saturday, Jan. 16, with demand rising until late February and continuing to exceed availability until March 17.

The IMHE model puts the number of ICU beds available to take COVID-19 patients at 210, which is far below the actual number of total ICU beds in Oregon — 695, according to tracking data from the OHA. However, not all of those beds will be able to accept COVID-19 patients, and as of Jan. 12, only 127 of those beds statewide were unoccupied and staffed, according to the OHA.

A different scenario that IHME modeled, which accounts for a rapid rollout of a COVID-19 vaccine to those at high risk, predicts fewer deaths from the disease. However, spread in that scenario remains extreme.

Under the rapid rollout to high-risk populations scenario, which appears to track closely with statewide vaccination efforts thus far, the model projected Oregon would tally 8,650 average daily COVID-19 infections by Feb. 6 and a total of 4,585 deaths by April 1.

“As compared to a no vaccine scenario, rapid rollout (of a COVID-19 vaccine) targeting high-risk individuals only could save 1,300 lives,” IHME stated in its modeling report.

In the IHME’s worst-case scenario, state mandates were eased, resulting in a projected death toll in Oregon og 6,876 by April 1 and 15,744 average daily new infections reached by Feb. 11.

The IHME’s best-case scenario came in the form of an immediate jump to “universal mask use,” in which 95% of Oregonians complied fully with proper mask-wearing procedures. In that scenario, daily infections held steady before beginning to taper off in early February. Current mask use was measured at 76%.

While the projections from the Institute of Health Metrics and Evaluation are dire, it should be noted the Oregon Health Authority maintains that modeling is extremely challenging. Additionally, changes in each of the factors that drive the spread of the disease — mask wearing, vaccination, social distancing — are all modeled separately, meaning that changes in more than one (for example, if vaccination were to speed up as people wore masks more diligently) would result in a different outcome.