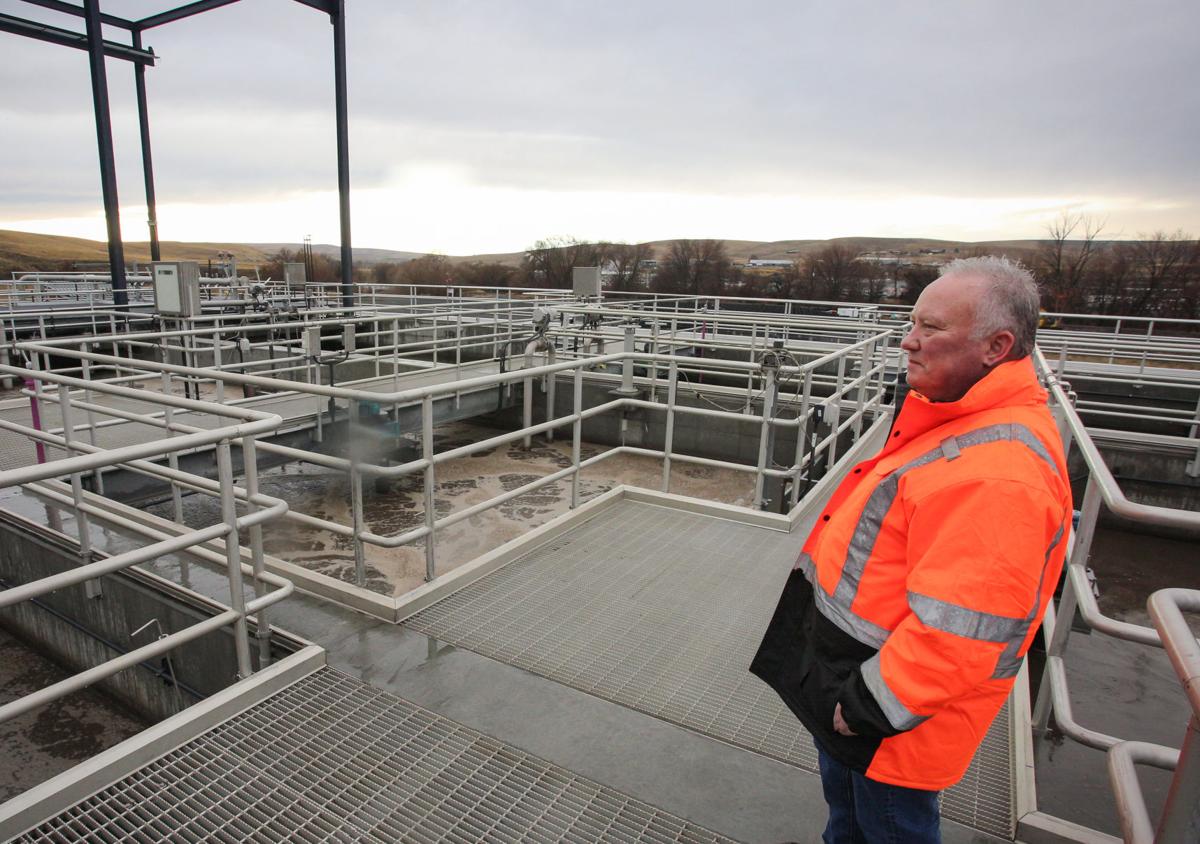 Pendleton Wastewater Superintendent Mark Milne looks out over a set of aeration basins at the wastewater treatment plant in Pendleton on Thursday, Dec. 12, 2019. The city of Pendleton has seen an uptick in COVID-19 levels in its sewage. 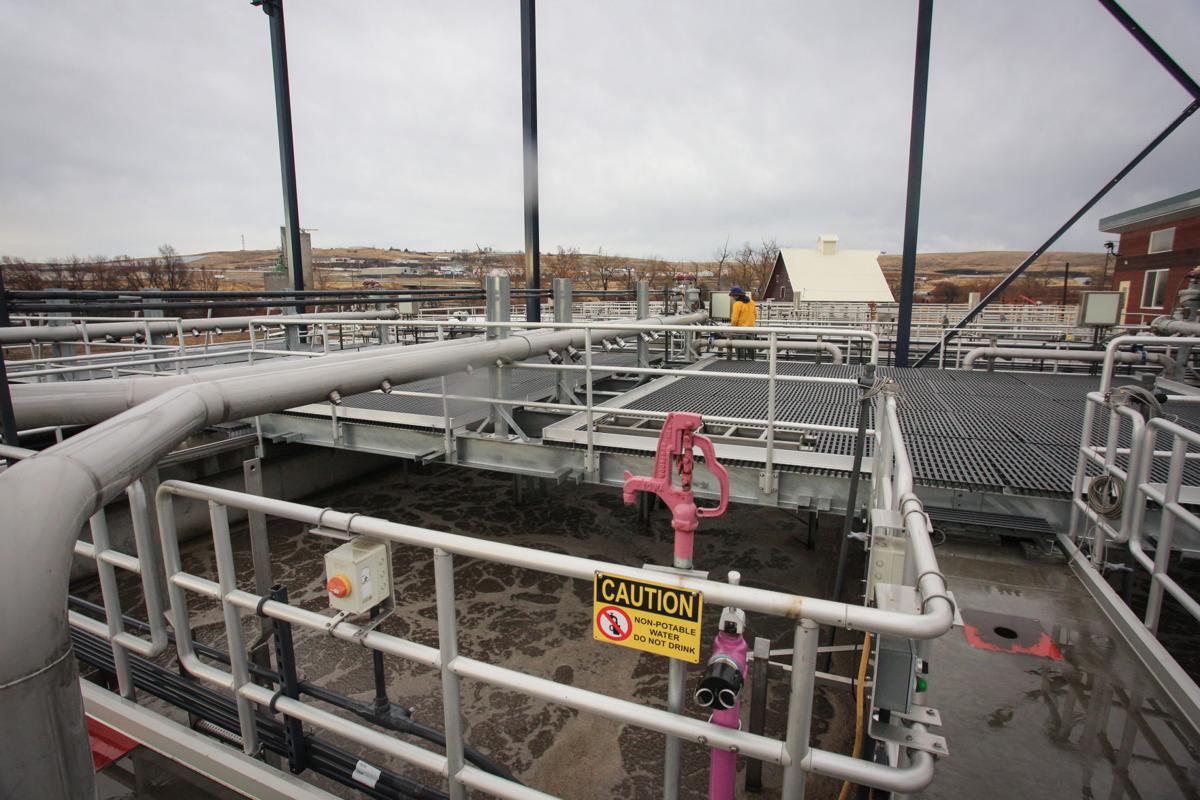 Wastewater flows through a set of aeration basins at the wastewater treatment plant in Pendleton on Thursday, Dec. 12, 2019. 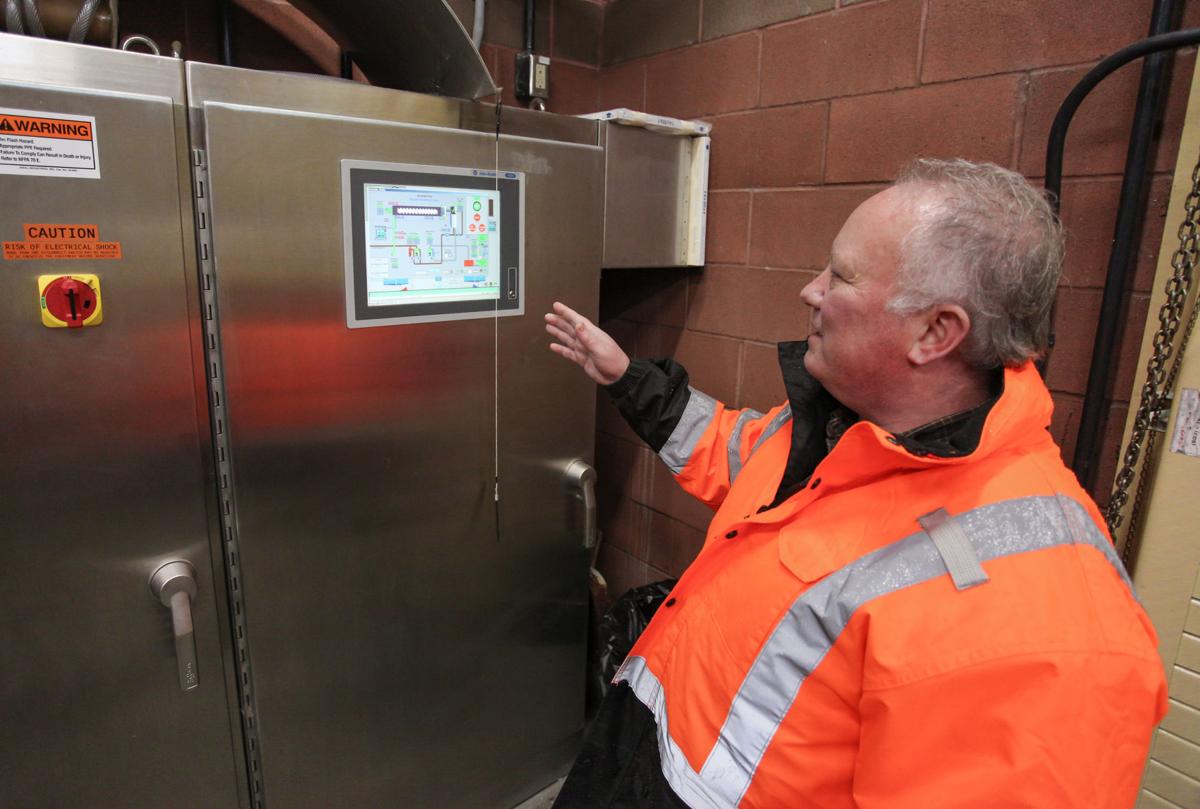 Pendleton Wastewater Superintendent Mark Milne explains the dewatering process that sewage goes through at the wastewater treatment plant in Pendleton on Thursday, Dec. 12, 2019. 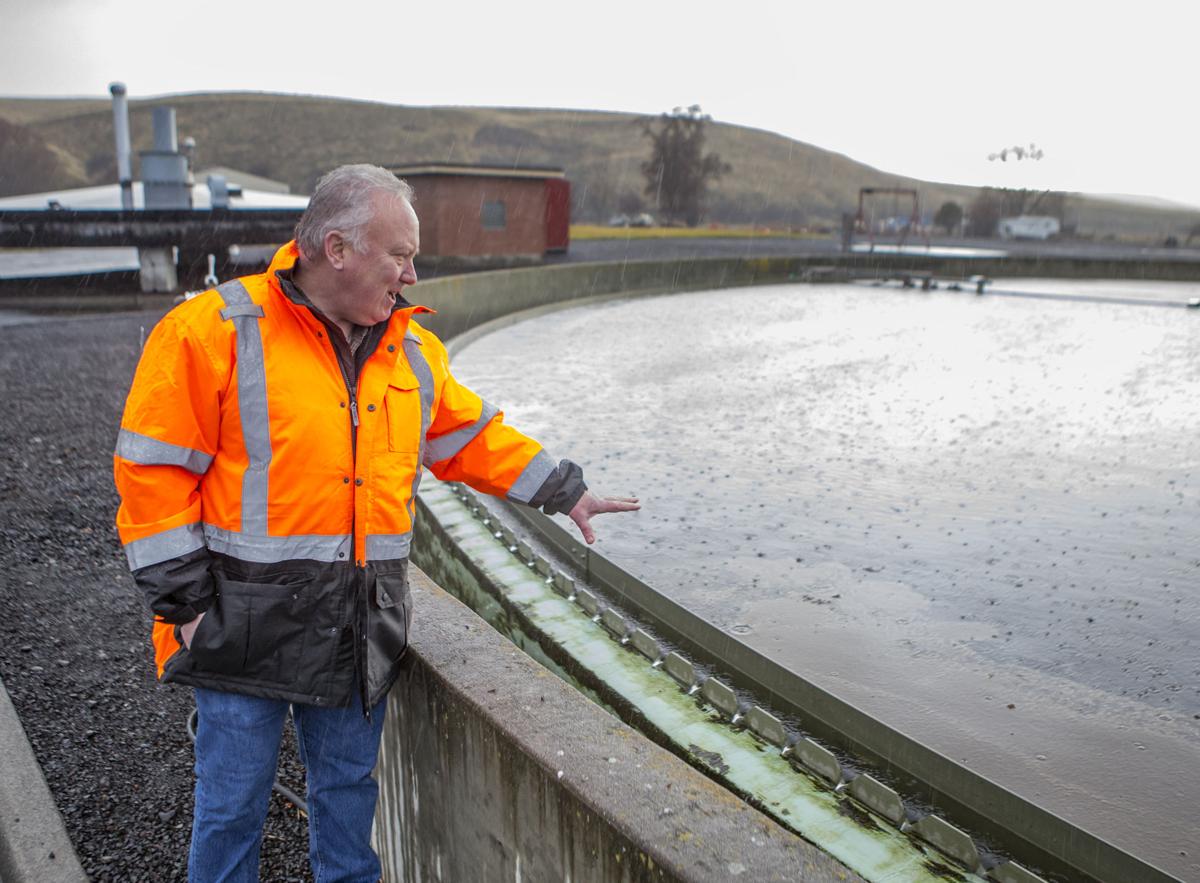 Pendleton Wastewater Superintendent Mark Milne explains how a clarifier works at the wastewater treatment plant in Pendleton on Thursday, Dec. 12, 2019.

Pendleton Wastewater Superintendent Mark Milne looks out over a set of aeration basins at the wastewater treatment plant in Pendleton on Thursday, Dec. 12, 2019. The city of Pendleton has seen an uptick in COVID-19 levels in its sewage.

Wastewater flows through a set of aeration basins at the wastewater treatment plant in Pendleton on Thursday, Dec. 12, 2019.

Pendleton Wastewater Superintendent Mark Milne explains the dewatering process that sewage goes through at the wastewater treatment plant in Pendleton on Thursday, Dec. 12, 2019.

Pendleton Wastewater Superintendent Mark Milne explains how a clarifier works at the wastewater treatment plant in Pendleton on Thursday, Dec. 12, 2019.

PENDLETON — There may be COVID-19 in the city of Pendleton’s wastewater system, but city officials aren’t trying to take the results literally.

According to an internal spreadsheet provided by the city, Pendleton has been testing for the presence of coronavirus at its sewage plant since late March.

The system didn’t show any results until April 5, when a lab determined that COVID-19 was prevalent in 0.84% of its sample, a percentage it estimated came from a community of 150 infected people. The lab didn’t detect anything within the next six weekly samples until June 7, when Pendleton’s sample suddenly ballooned to a 4.2% prevalence rate, which led officials to estimate 730 cases in the community.

The sewer testing suggested a COVID-19 situation in the Pendleton area much more dire than the individual testing data made available by Umatilla County Public Health and the Oregon Health Authority. Following months of showing Pendleton’s COVID-19 overall case count in the single digits, Pendleton didn’t have enough cases to have a specific number attached to it until June 24, when OHA reported 13 cases in the Pendleton area.

City Manager Robb Corbett compared the sewer test results to an experimental drug trial, a new method of testing that needed more time and work to determine if it’s effective and accurate.

Corbett said the city hasn’t publicized the results or shared the data with local health officials because of the wildly fluctuating numbers.

Wastewater Superintendent Mark Milne isn’t trying to take the tests results at face value either, saying the data may just show that the Pendleton area is seeing an upward trend in COVID-19 cases.

There are no state or federal rules that require sewer systems to test for the virus, but Milne decided to begin testing Pendleton’s system after he saw a promotion in Oregon Association of Clean Water Agencies offering $120 tests from the Cambridge, Massachusetts-based Biobot Analytics.

For the past three months, plant staff have been collecting a composite wastewater sample over a 24-hour period. They transfer the sample to a container provided by Biobot, which is then sent to the company’s lab for analysis.

While Biobot’s 730-case estimate suggests the Pendleton area has more cases than public data has indicated, Milne said Biobot compared Pendleton’s sample data to other cities without factoring in what makes those cities different, like density or industry.

In an email, a Biobot spokesman said no one for the company was available for an interview and instead forwarded some general information about the company and its COVID-19 testing program.

Biobot advertises its sewer testing system as being able to provide communities COVID-19 data outside the scope of individual testing and hospital reporting.

“Recent studies ... show that there are asymptomatic patients who are still infectious or patients with mild symptoms who are not captured in the limited testing data — yet because sewage data is able to capture the whole population such samples enable our public health interventions to match and better understand the actual infected population,” Biobot states.

The spokesman said Biobot is unable to disclose the specific locations where it is testing wastewater, adding that it’s now working with “about 400 cities” in 42 states.

Despite Biobot’s reach, there didn’t seem to be many other communities in the region that were testing their sewage systems for COVID-19.

A massive outbreak at a church in neighboring Island City helped push Union County past the 300-case mark, but La Grande isn’t looking to its sewers for answers.

Robert Strope, city manager for La Grande, said wastewater testing is not something the city is doing or plans to do.

Strope seemed surprised when first learning of Pendleton doing so. He later confirmed it with the city of Pendleton, and said that in what he had briefly read on the topic, testing of that nature would serve primarily as an indicator of COVID-19 in the system.

What to do after that, though, is another question.

“If you’ve (identified) something in the system, where does it come from and what could you do with the information if you have it?” he said.

Pendleton’s wastewater treatment plant doesn’t just serve the city of Pendleton, but also unincorporated Rieth and parts of the Confederated Tribes of the Umatilla Indian Reservation, which has reported five confirmed COVID-19 cases as of Friday afternoon.

CTUIR spokesperson Chuck Sams said he hadn’t heard about the city testing their sewer system for the coronavirus, but added that they have been good public works partners. Sams said Pendleton’s sewer system covers the Mission and Riverside areas of the reservation, including the Wildhorse Resort & Casino.

While Biobot’s tests may indicate that COVID-19 remains active in Pendleton, Milne didn’t think the city’s sewer system risked spreading the virus through their plumbing and toilets.

“How many people come into contact with sewage after it’s flushed?” he asked.

While cautioning that data is limited, the Centers for Disease Control and Prevention also states it has found no information linking COVID-19 to wastewater exposure.

OHA did not respond to a phone message and email requesting comment.

While Pendleton isn’t taking Biobot’s test results as gospel, it will continue to use the company’s test through the end of the year.

Milne said Biobot recently raised its testing price from $120 per test to $1,200. That spurred the city to scale down from weekly tests to two tests per month, but the city remains committed to testing for COVID-19 for the next six months.