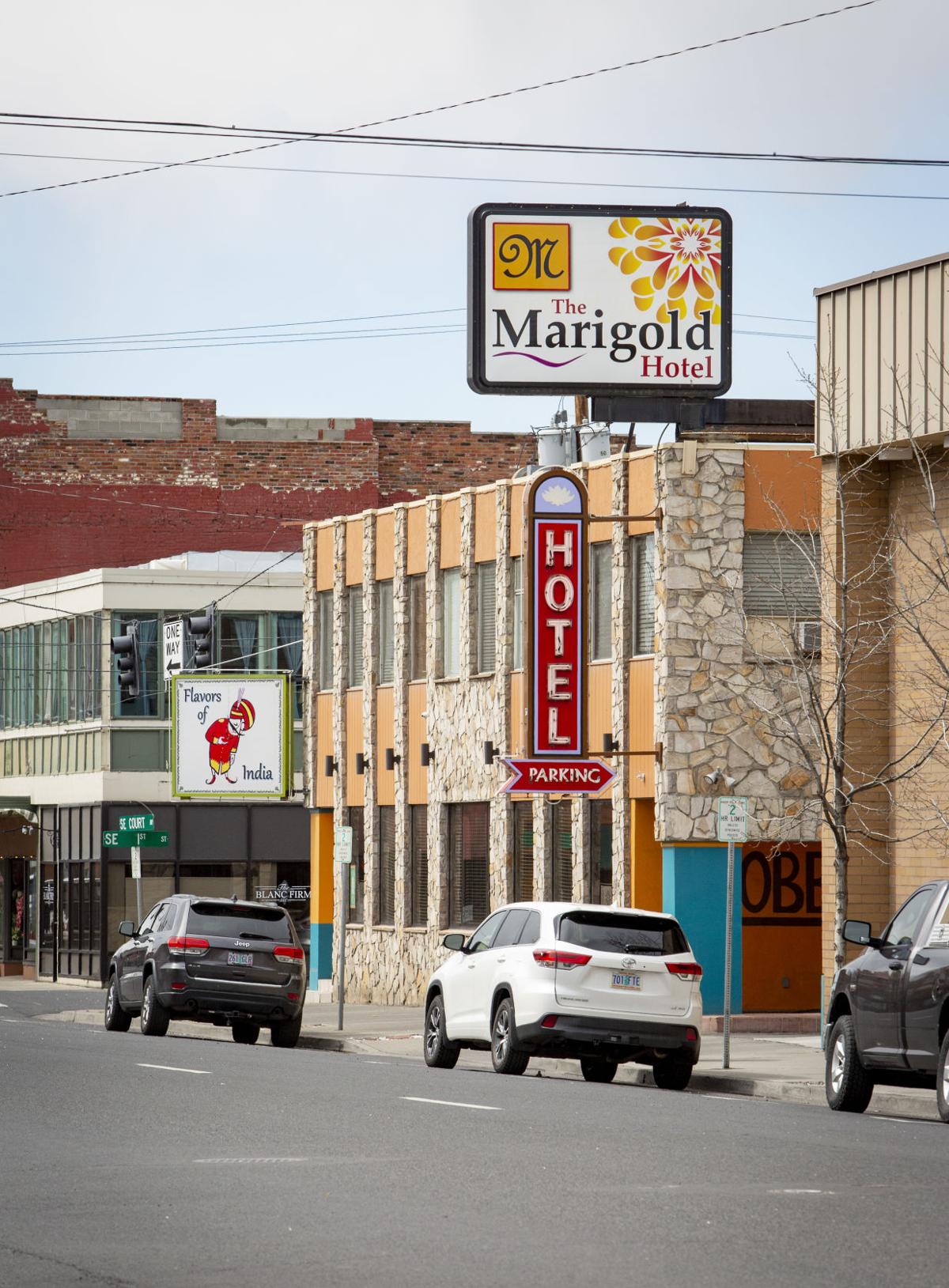 The Marigold Hotel, through funding from CAPECO and help from other local outreach organizations, has been using its rooms to house unsheltered individuals in Pendleton. The hotel has rented out 46 rooms and is housing a total of 61 people as of Monday night. 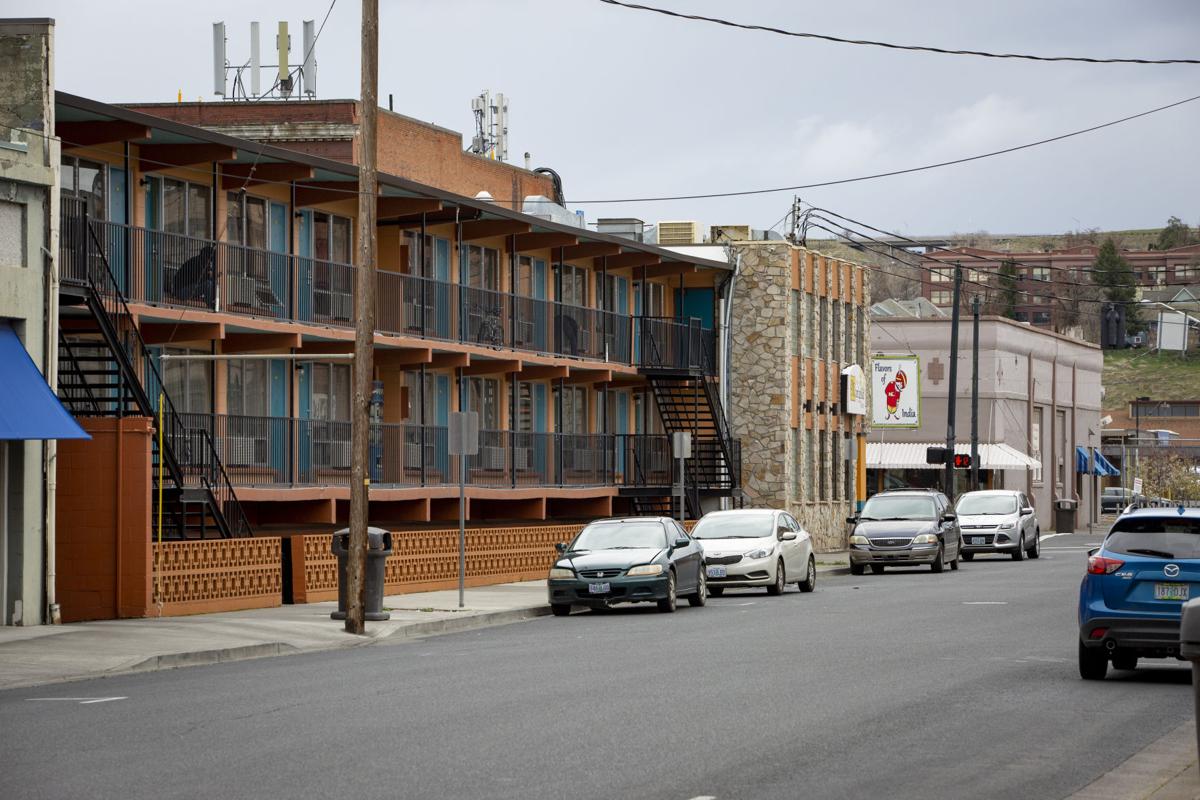 Pendleton’s Marigold Hotel has been serving as the temporary home for more than 60 unhoused people amid the COVID-19 outbreak. The hotel’s rooms, paid for through money from the Community Action Program of East Central Oregon and other local outreach organizations, have been mostly full as a result.

The Marigold Hotel, through funding from CAPECO and help from other local outreach organizations, has been using its rooms to house unsheltered individuals in Pendleton. The hotel has rented out 46 rooms and is housing a total of 61 people as of Monday night.

Pendleton’s Marigold Hotel has been serving as the temporary home for more than 60 unhoused people amid the COVID-19 outbreak. The hotel’s rooms, paid for through money from the Community Action Program of East Central Oregon and other local outreach organizations, have been mostly full as a result.

PENDLETON — While Oregonians have been ordered to stay in their homes as much as possible to reduce the spread of COVID-19, one of the more vulnerable populations to the virus doesn’t have a home to stay in.

Without access to adequate housing, food and hygiene, the homeless population is at greater risk of spreading the virus both between themselves and to their communities.

In an attempt to reduce those risks, Pendleton’s Marigold Hotel has provided shelter and food to the local homeless population since March 19 and housed 61 people in 46 rooms on Monday night.

Pendleton City Councilor Carole Innes has spearheaded the project, and said it was an easy choice to help once she had the chance.

The project was made possible with the help of the Community Action Program of East Central Oregon, which contacted Innes on March 18 to tell her funding had become available to help house the homeless during the pandemic.

“But CAPECO staff was just swamped dealing with all the flood victims and all the issues surrounding that,” Innes said. “But if I would spearhead it, we could see what we could do about getting people off the street.”

So Innes got on the phone with David Haskett, who regularly provides meals at Pendleton’s Stillman Park for whoever may need it and works closely with the area’s homeless population, and brought him on board to help coordinate.

With dependable help by her side, Innes now needed to secure a hotel to partner with the project.

Gov. Kate Brown’s stay-home order and general concerns about COVID-19 have devastated businesses around Oregon, and the tourism and lodging industries have been hit particularly hard, which has kept many hotels and motels mostly vacant.

Innes reached out to the Marigold Hotel, which not only agreed to the partnership, but has accommodated its new guests as best it can.

“The local staff has been so cooperative,” Innes said. “They have worked long hours and hard hours to make sure that everything is taken care of and anything we needed is addressed.”

An employee with the Marigold Hotel said the hotel was told not to comment on the agreement with CAPECO, and CAPECO could not be reached for comment on Tuesday.

Once the location was locked in, Innes said she began crafting basic rules for guests, drafted check-in sheets, and contacted Pendleton Police Chief Stuart Roberts to go over security and safety.

Innes said any person staying at the hotel had to sign in and register, and those who didn’t would be asked to leave. Though there’s been a couple of instances where the police have asked someone to leave or arrested somebody on an outstanding warrant, she said the community has overall been receptive to the rules.

For the three daily meals being provided at the Marigold, the guests are asked to come through and keep the recommended 6 feet between themselves and others as they grab food and return to their rooms to eat.

The Salvation Army delivers lunches each day to the hotel, and Haskett usually cooks dinner using ingredients donated by local organizations and individuals. Other organizations, such as Neighbor 2 Neighbor, which is led by Dwight Johnson and operates the Pendleton Warming Station that has shut down due to the pandemic, donated clothing and other supplies.

“It really is a community effort to do this,” Innes said.

For now the project is operating indefinitely, but along with coordinating the logistics of meals and supplies, Innes submits a daily report to CAPECO with the number of rooms being occupied and people staying in them. These reports help the organization track the funding, which even Innes doesn’t know the extent of.

“As long as things run smoothly, (CAPECO) would be happy to support in whatever way they can,” Innes said. “We know the state and federal government are making this kind of thing a focus, so we’ll see what happens.”

When the Oregon Legislature reconvenes for a special session to address the COVID-19 pandemic, resurrecting a bill that failed earlier this year is among the top priorities.

The bill — House Bill 4001 — would make it easier to site homeless shelters and allow parking lots to be used as transitional housing facilities where people could sleep in their vehicles, among other things.

For now, Innes, Haskett and a number of volunteers throughout the area are pulling together to help protect a vulnerable population with the local resources they have. And the people they’ve been helping protect have been showing the same selflessness.

Those staying at the hotel are chipping in to help move supplies, do laundry and clean up around the property. Innes said one man even gave his room away when a woman and child arrived needing shelter and he thought they needed it more than him.

“That kind of generosity and kindness, it’s heartwarming,” she said. “There are certain displays of humanity and general good kindness to one another. It never hurts to be kind.”

Assistance for local homeless population restricted due to funding limitations