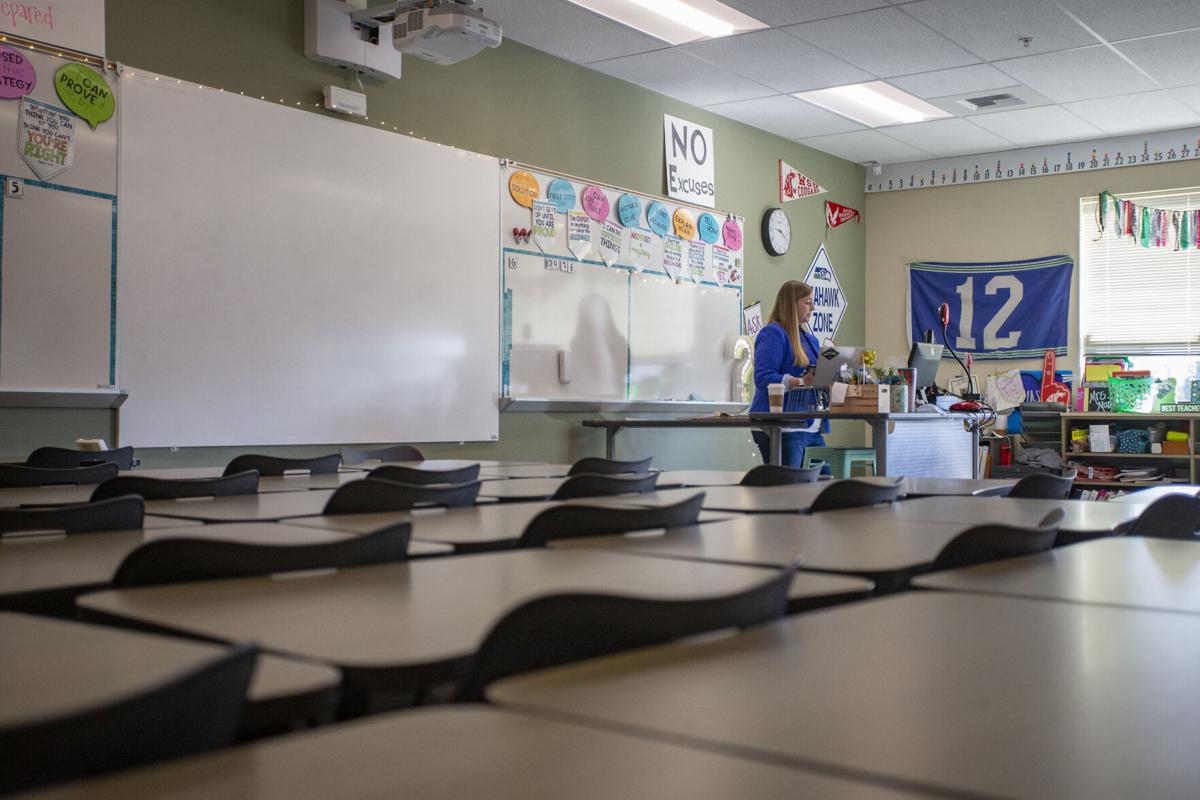 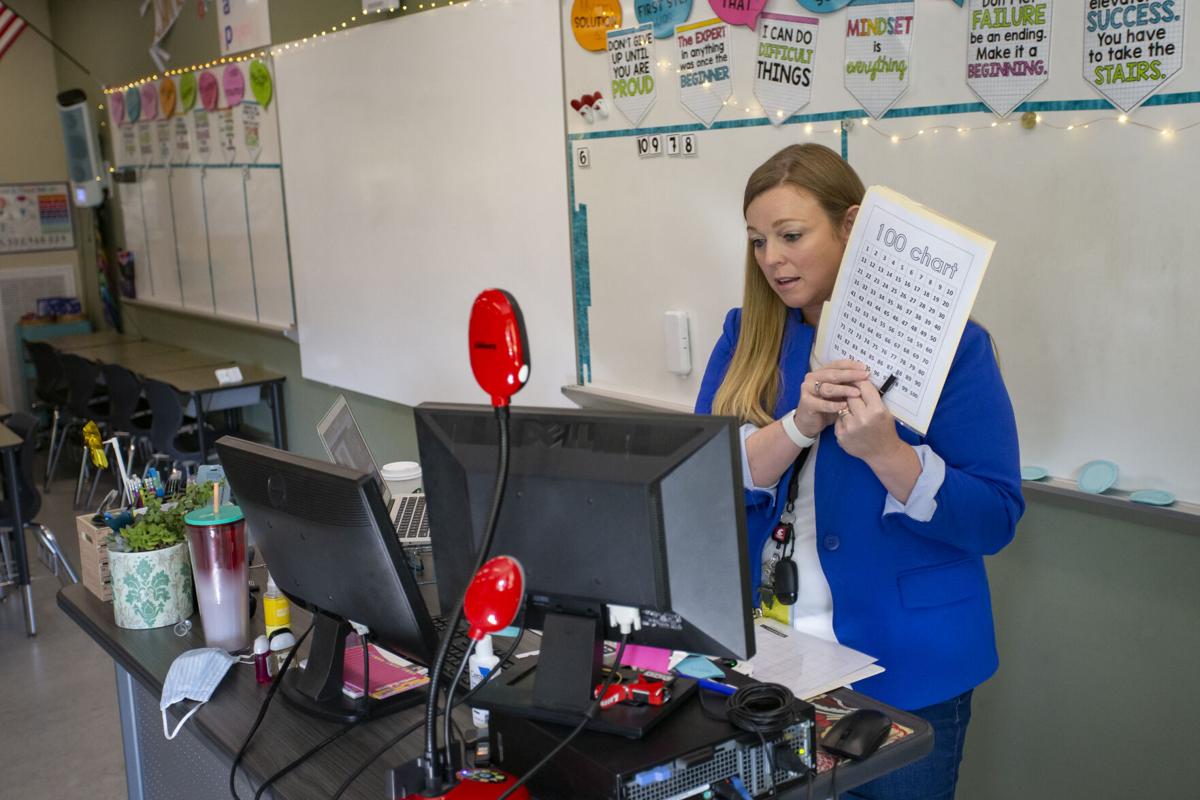 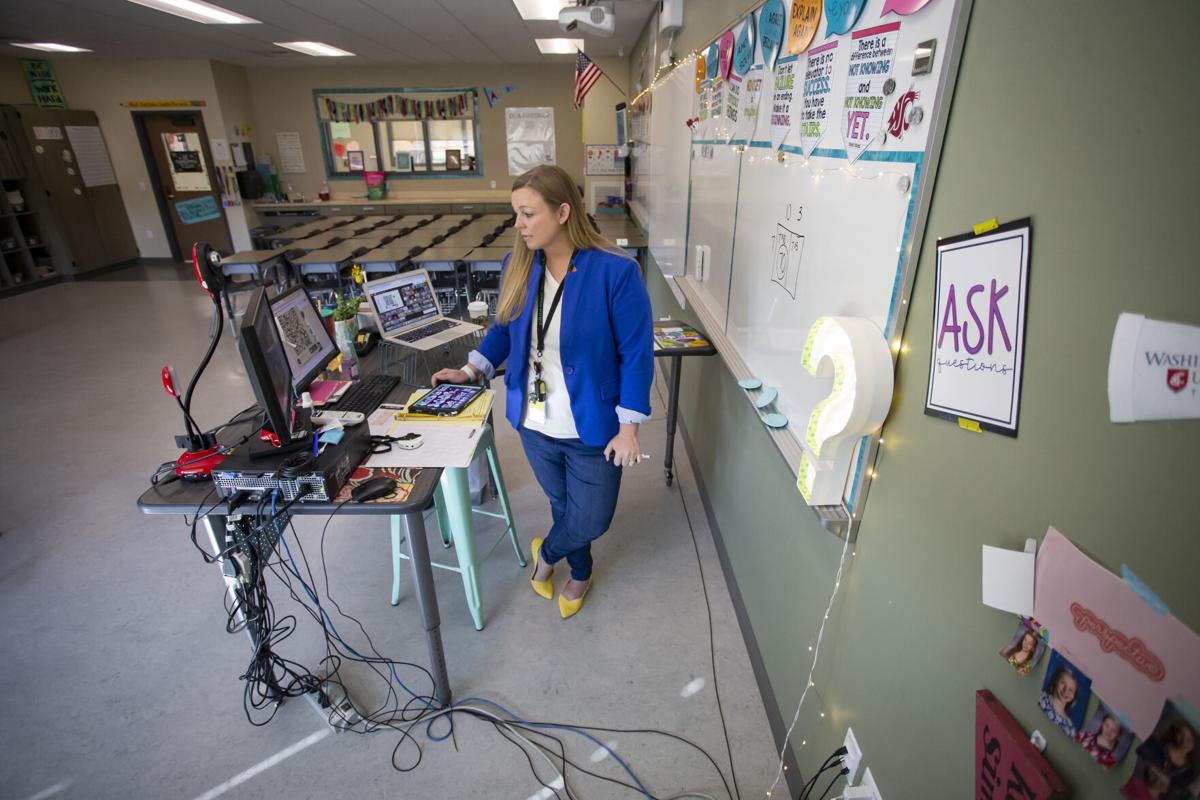 Sherwood Heights Elementary School teacher Julie Murphey looks toward a set of computer monitors displaying her students as she instructs a distance learning math lesson from her classroom on Wednesday, Sept. 9, 2020, in Pendleton. 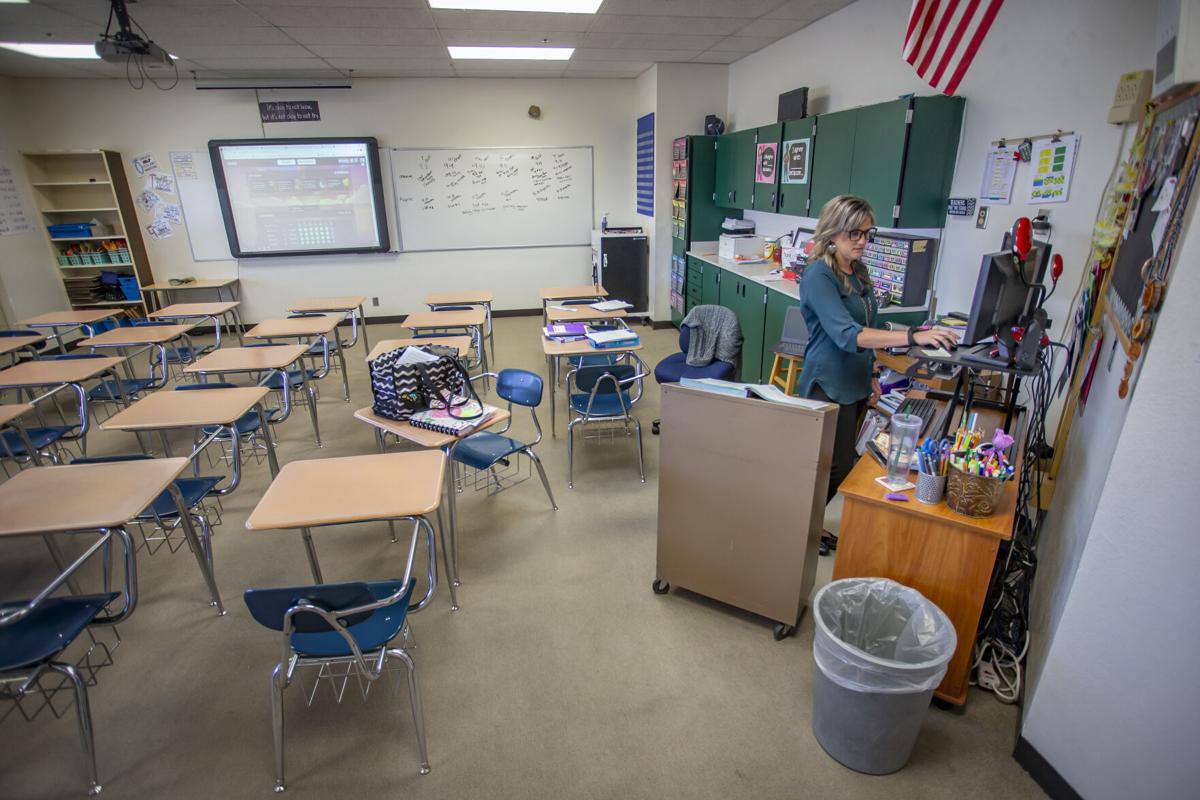 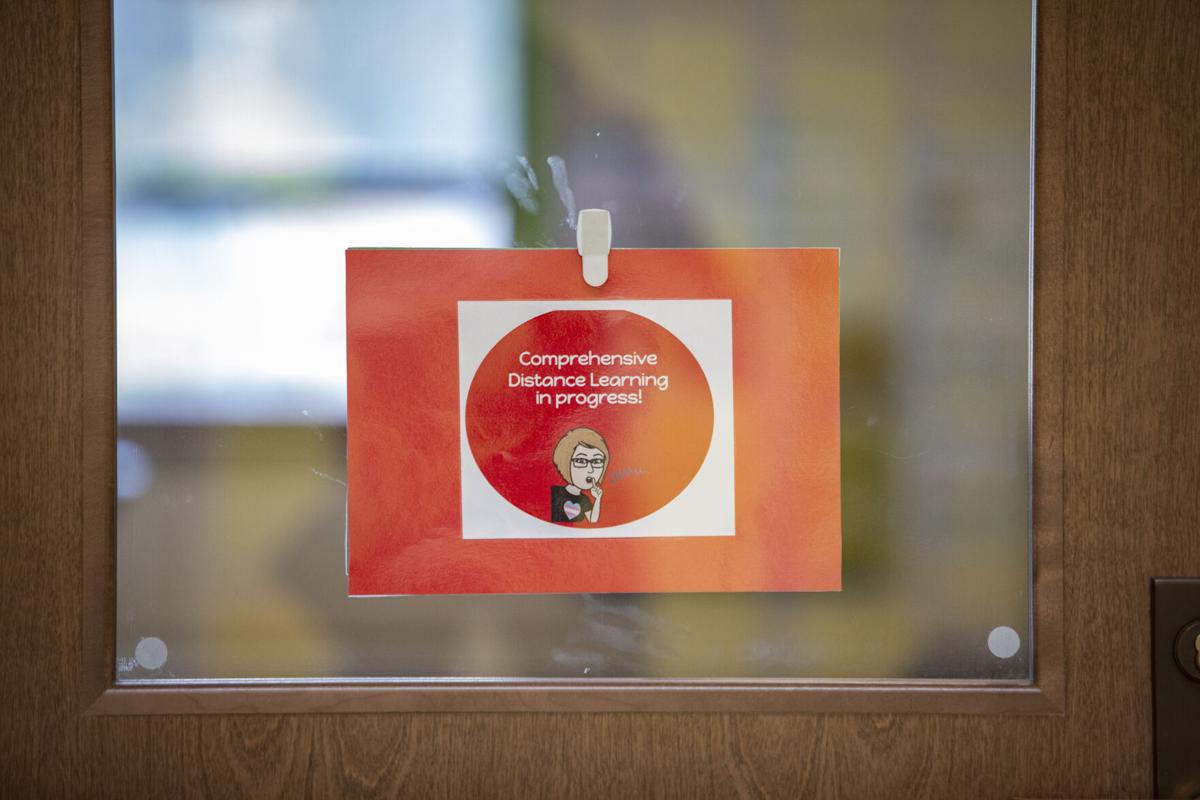 A sign on a classroom window at Sherwood Heights Elementary School in Pendleton advises that distance learning is in progress on Wednesday, Sept. 9, 2020. 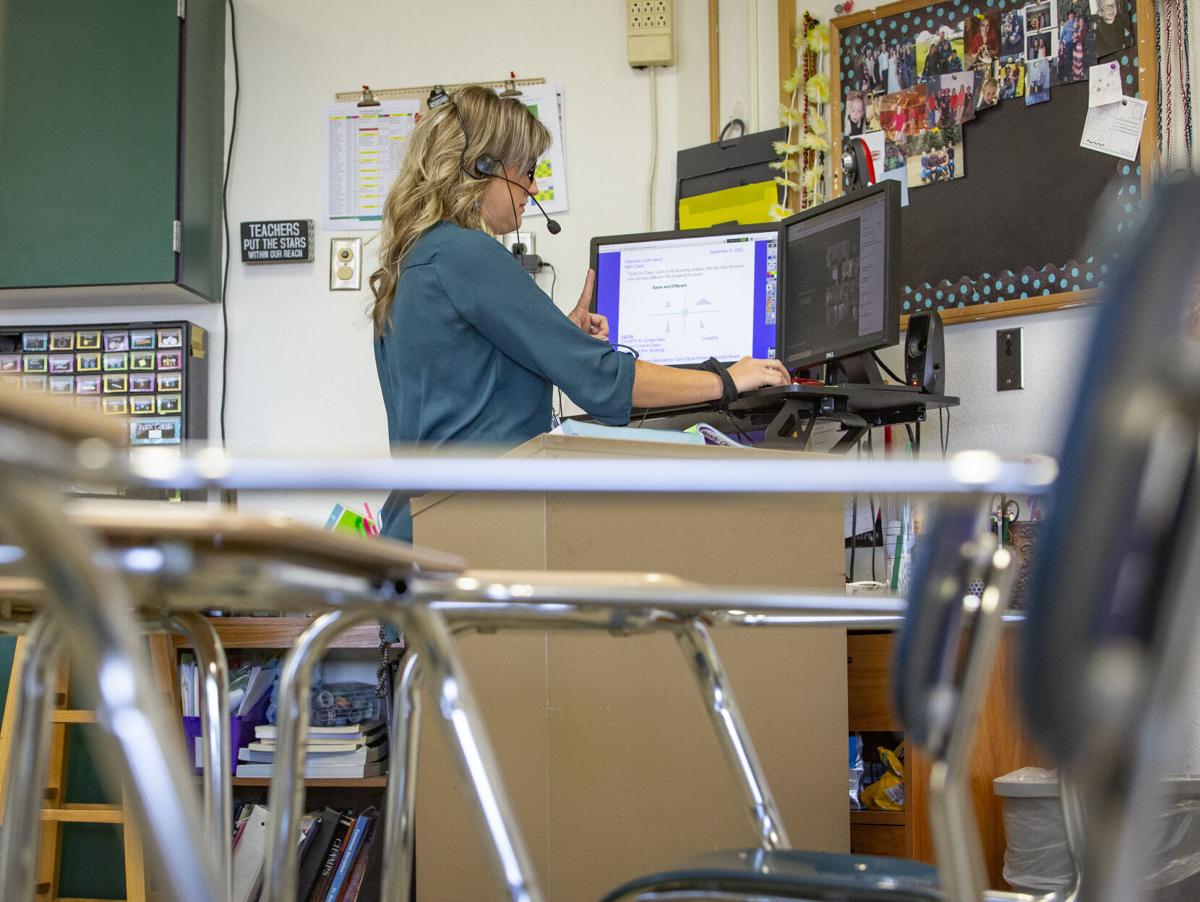 Sherwood Heights Elementary School teacher Julie Murphey looks toward a set of computer monitors displaying her students as she instructs a distance learning math lesson from her classroom on Wednesday, Sept. 9, 2020, in Pendleton.

A sign on a classroom window at Sherwood Heights Elementary School in Pendleton advises that distance learning is in progress on Wednesday, Sept. 9, 2020.

PENDLETON — The desks were empty, the halls were quiet, but school was still in session on Wednesday, Sept. 9.

Pendleton School District students and staff were technically in their second week of school, but it was only the second day of instruction after spending the first week getting parents and children acquainted with the technology and procedures of distance learning.

Most students haven’t been back in a Pendleton school since March, when the COVID-19 pandemic forced all districts in Oregon to start teaching their children online. Most schools weren’t allowed to reopen in the fall, but local districts are aiming to offer a more comprehensive experience than they offered last spring.

At Sherwood Heights Elementary School, fifth-grade teacher Julie Murphy had pushed all the student desks into a corner, giving her own desk a wide berth to set up a digital command center. Murphy’s setup included two computer monitors, a laptop, and a tablet to keep track of her students on video chat and the documents she was sharing. Off to the side was a fifth screen, a cellphone she used to stay in touch with her own children when she wasn’t teaching.

Even as Murphy started her math lesson, the quietude of Sherwood Heights wasn’t disturbed all that much. Students spent most of the time muted, sharing answers to the math problems she was going over in the chat or on a white board the school provided. The most boisterous it got was when Murphy’s sound cut out and students turned on their microphones to tell her.

After her lesson ended, Murphy exhaled deeply, and then tried to cast some of her technical difficulties in a positive light.

“It’s probably good that (the students) know that I go through the same problems they do,” she said.

This is Murphy’s sixth year teaching in Pendleton and 18th overall, and although she isn’t able to engage with students the way she would in person, she feels like many of her skills translate online.

When students return to the classroom once the COVID-19 pandemic subsides, Murphy said teachers will have a whole host of new school resources they didn’t have before distance learning, highlighting the webpages some teachers designed to connect students with material and resources.

“I think a lot of us are learning new talents we didn’t know we had,” she said.

Murphy said she had perfect attendance the first day of school. Her students are separated into morning and afternoon groups that receive the same lessons. Middle and high school students are divided into “green” and “gold” groups that experience their eight-class periods over two days instead of one.

Matt Yoshioka, the district’s director of curriculum, instruction and assessment, said speakers going out was one of the most common technical issues among teachers.

While Pendleton has never had to contend with so much technology being used at once, Yoshioka said the district is holding up on its end.

Despite experiencing 3,000 users on its first day, Yoshioka said the district’s IT staff said the schools’ servers only hit about 50% of capacity.

But there’s still some unanswered questions on the student end of the internet spectrum.

Yoshioka said the district was still concerned about the handful of students without internet access, especially those in the district’s outlying areas. Although the school system is based in Pendleton, its boundaries are the largest in the county, extending as far east as Meacham and as far north as Adams. He said some students have been going to other households to find internet access, but it was still a problem that needed to be solved.

At Sunridge Middle School, math teacher Katie Bodewig has been spending her opening days introducing herself to students rather than delving right into a math lesson.

As she transitioned from one period to the next, a student logged on early and started chatting with Bodewig about a visit he got from the assistant principal.

In order to maintain a sense of normalcy, Sunridge Principal Dave Williams said the school has been emailing students the daily set of announcements that usually go over the public address system, including birthdays. Birthdays don’t just get a shoutout in an email, but also a visit from Assistant Principal Jared Tesch, who personally delivers treats to students.

Bodewig said she feels students need more than five minutes between classes, adding that she chose to end her last class five minutes early to provide students with that extra time.

Williams said Sunridge intends to stay flexible throughout distance learning, comparing the middle school’s plan to a romantic pairing — in a relationship, but not married.

HERMISTON — Students and teachers alike were facing new territory for Hermiston School District on Tuesday, Sept. 8, as they started their fir…