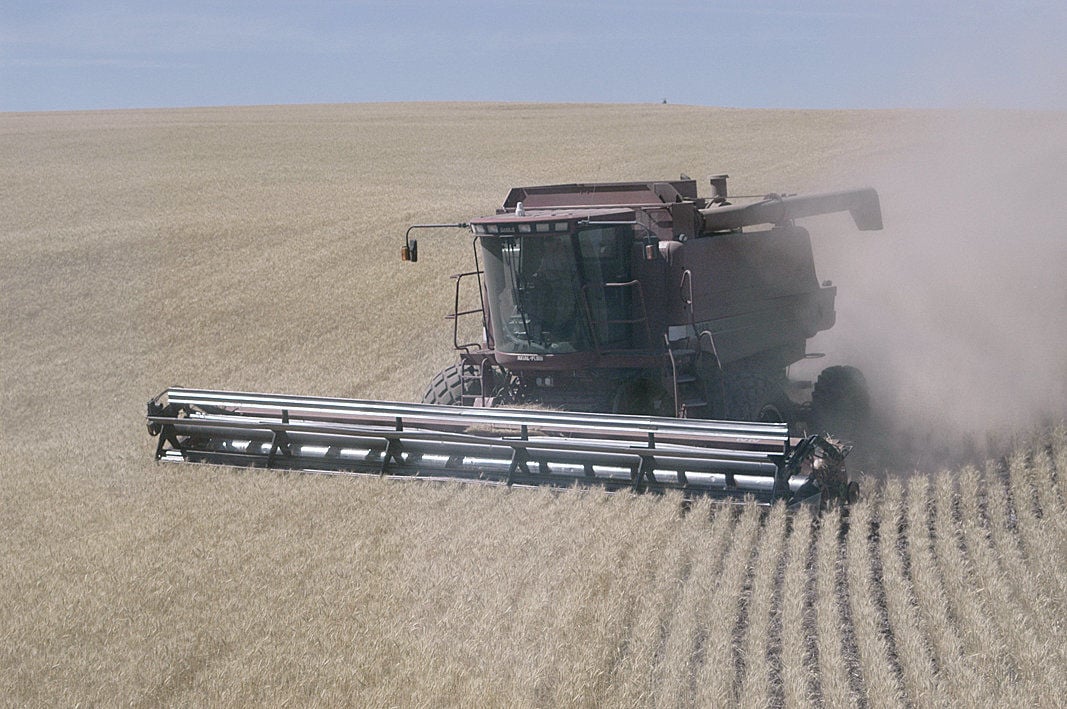 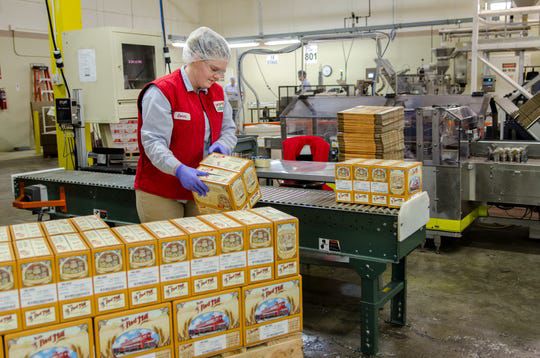 A worker stacks packages on a pallet at Bob's Red Mill in Milwaukie. This image taken prior to COVID-19 related mask recommendations.

A worker stacks packages on a pallet at Bob's Red Mill in Milwaukie. This image taken prior to COVID-19 related mask recommendations.

This article was originally published by the Salem Statesman Journal, one of more than a dozen news organizations throughout the state sharing their coverage of the novel coronavirus outbreak to help inform Oregonians about this evolving heath issue.

SALEM — Two months ago, a common attitude was "gluten was a terrible thing," said Clint Carlson, president of the Oregon Wheat Growers League and farmer at 4-C Ranches in Ione, "and now all of a sudden you can’t find flour anywhere."

Flour-dusted store shelves, emptied of bags, have become a commonplace sight in the last month despite the gluten-free diet trend and grocers placing purchase quantity limits. Bloomberg reported sales of flour were up 155% compared tor the same week in 2019, while yeast sales were up 457%.

Quarantine baking is officially a craze, one that has people making sourdough bread as a hands-on hobby and flocking to carbs as a source of comfort in a stressful time.

The shortage of flour in stores, however, doesn't reflect a grain shortage. Oregon's wheat growers, millers and bakers are all experiencing the impact of COVID-19 and #quarantinebaking differently.

Wheat is Oregon's most exported agricultural crop; more than 85% of the nearly 3 billion pounds of wheat produced annually in the state is destined for export to Asia.

Oregon wheat growers, including Carlson, primarily grow soft wheat varieties. Because of their low gluten content, soft wheat flours are best for making pastries, cakes and Asian-style noodles. Since it's different from the primarily hard types of wheat in the bread and all-purpose flours flying off of store shelves, Carlson and other Oregon wheat growers haven't felt an acute spike in demand the way the grocery industry has.

Instead, they're busy tending to the winter crop still in the fields, battling weeds and preparing for the busy season ahead.

"This time of year the crops are growing and they need to be sprayed," Carlson said, "but it’s been so windy it’s hard to get out and get it done."

The concern growers do feel has more to do with how the pandemic will impact commodity pricing globally.

"In the past year we’ve had China tariffs, that’s kept the price of wheat below what it should be, and then the pandemic," said Carlson,"beef, pork, wheat — the prices are plummeting and that’s terribly hard on farmers and ranchers."

The demand for and price of flour in grocery stores, "it really doesn’t reflect the price we’re getting."

Amanda Hoey, CEO of the Oregon Wheat Commission, said while the types of wheat in high demand don't represent the majority of that grown in Oregon, "any sale of wheat will ultimately have an impact on the market for wheat overall."

Like many others, Oregon's wheat industry faces uncertainty directly tied to the way the global economy recovers from the pandemic. The bulk of Oregon's wheat harvest will happen in the summer months, and it's too soon to tell what the impact of the COVID-19 pandemic will look like when harvest time comes.

"There’s nothing we can delay," said Hoey, "Mother Nature continues the seasons, so if we’re not out tending our fields now we won’t have enough later on."

Representatives from the employee-owned company declined to comment on how many jobs the business has added in response to increased demand, but Bob's familiar line of flours and baking mixes are in short supply at area grocers, sold out for weeks even on the company's own website.

A message on the site explains "we have recently experienced an unprecedented surge in demand. As a result, some of our popular products may be temporarily unavailable."

Matthew Cox, vice president of marketing, said the number of online orders have doubled in the past month. Visits to the company's Sourdough Learning Center page — and related sourdough recipes — shot up by more than 200% in March.

The customer service department is fielding calls from people asking for help making ingredient substitutions, and what to do with sourdough discard.

"One of the most-asked questions we’ve gotten," said Cox, is whether nutritional yeast will make bread rise. "Unfortunately, the answer is no!"

"A lot of people have been baking at home since the pandemic, whether to relieve stress, for entertainment, or out of purely practical need. Some are rekindling an old love for home baking, and others are just now discovering it as a skill and pastime."

Not shortage, a slammed supply chain

At Camas Country Mill in Junction City, owners Tom and Sue Hunton are feeling the flour frenzy. The company, which buys directly from Willamette Valley growers and largely supplies their stone-milled whole grain flours to artisan bakeries throughout the state, has seen online orders increase by 10- to 15-fold.

"Quarantined bakers in 50 states," said Hunton, unable to buy flour at the grocery store, have been shopping online from small mills and "80% are brand new customers."

They've even received calls from grocery stores looking for retail packages of flour, hoping to fill the shelves while larger suppliers ramp up production.

Though the business had to close their onsite bakery, they've been able to divert staff to the mill, add weekend milling shifts and maintain supply without interruption, which Hunton believes demonstrates "the value of short supply chains."

"Everybody would say our business model was inefficient because our equipment was idle sometimes," Hunton said, but faced with increased demand “we can throttle it up and back a lot more easily.

"We’ve got the grain, it’s sitting here waiting to be milled."

The reason consumers can't find flour in the supermarket, he said, has more to do with packaging and distribution. "We’re not dealing with third party logistics with half our product across the country in storage."

Flour is missing only from the grocery stores, where bread remains abundant. This reflects the rapid pivot in the massive commodity supply chain. Restaurants are buying vastly less flour and consumers, shopping for retail packages, vastly more.

Hunton believes this might have something do specifically with shoppers' pandemic panicked minds.

"Their kids are home, they’re home" and having it means having options, he said: "We’ll bake muffins, we’ll make playdough, we’ll order some flour." In a moment rich with uncertainty, flour represents both nourishment and creative possibility.

Amy Teegarden bakes bread each week in her South Salem kitchen, a yeasted bread and a spicy olive bread baked in a Dutch oven.

She reinvigorated a long-neglected starter, for the same reason, she said, “as everybody else trying sourdough for the first time. I couldn’t find yeast at the store.”

Teegarden is now concerned about flour in her pandemic pantry. "I've got most of a 5-pound bag left. I’m hoping it will last a month if I’m careful with it, but at the rate I typically bake it won't last longer than that."

"With yeast you can at least do a sourdough culture, but flour, there’s no substitute."

Despite the shortage, Teegarden said, "I actually think it’s great that so many people are baking, it’s wonderful now that so many have a chance to try it.”

"I was really kind of panicking about a week ago when I went to all my favorite grocery stores looking for my favorite King Arthur Flour."

Schoaps secured a 50-pound bag of Shepherd's Grain bread flour, milled by a Washington-based cooperative, by going to a restaurant supplier. A daunting quantity to some, for bakers accustomed to making loaves requiring a pound or more each, 50 pounds feels like security.

Chris McCreedy also opted for the commercial sized bag of flour. An IT professional, McCreedy has been exclusively working from home for the past month. Before coronavirus, she typically made something from her sourdough starter weekly, but the long rising time means making sourdough doesn't work on weekdays.

Now, being home, "I feed it when I’m making my coffee, sometime in the afternoon it’s ready to mix up, and bread is ready to be baked around dinnertime."

Her next bake? A Pinterest-flagged recipe for sourdough doughnuts.

"There's something about bread. It’s comfort food. It’s easy, you know what you’re getting. There’s nothing like kneading dough to let your mind just wander and relax."