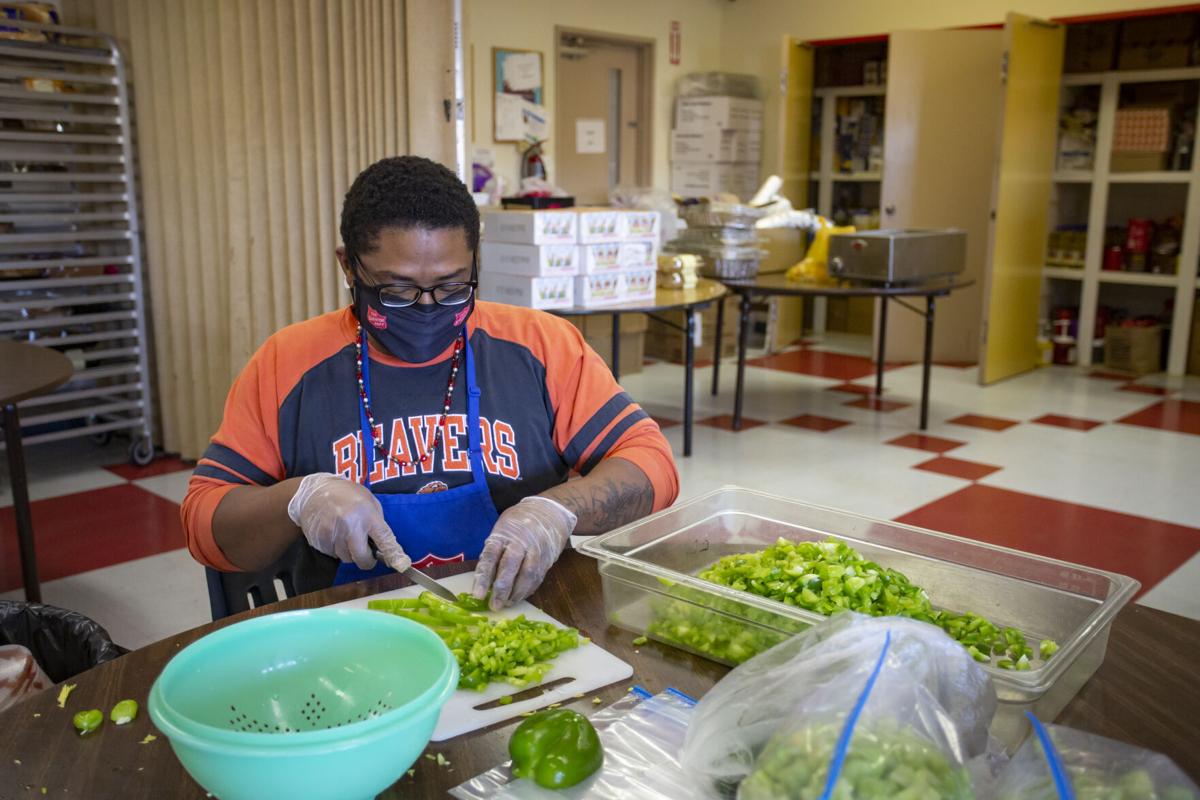 Christopher Harvey cuts produce at the Salvation Army in Pendleton on Tuesday, Nov. 24, 2020, in advance of the Salvation Army’s annual Thanksgiving meal. This year the meal will be served to go with the option to pick up on-site or have food delivered. 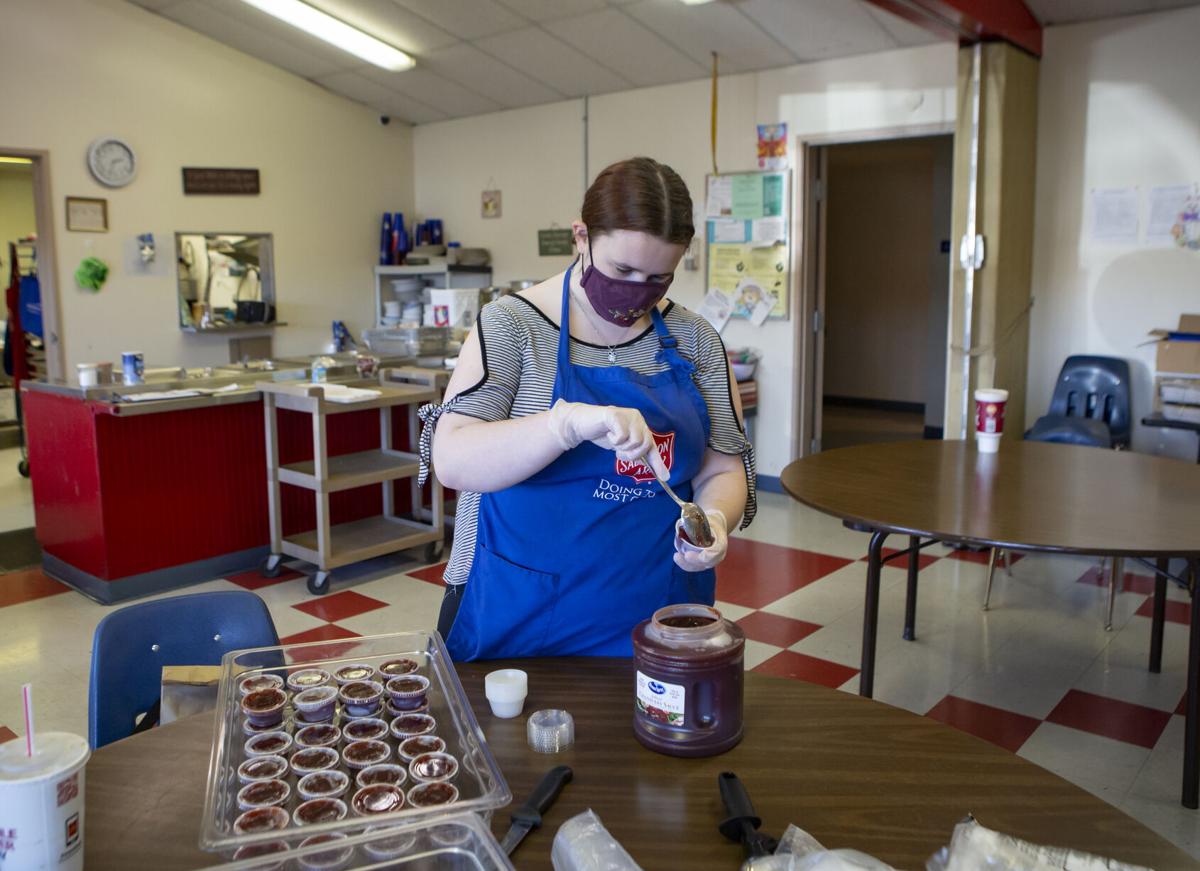 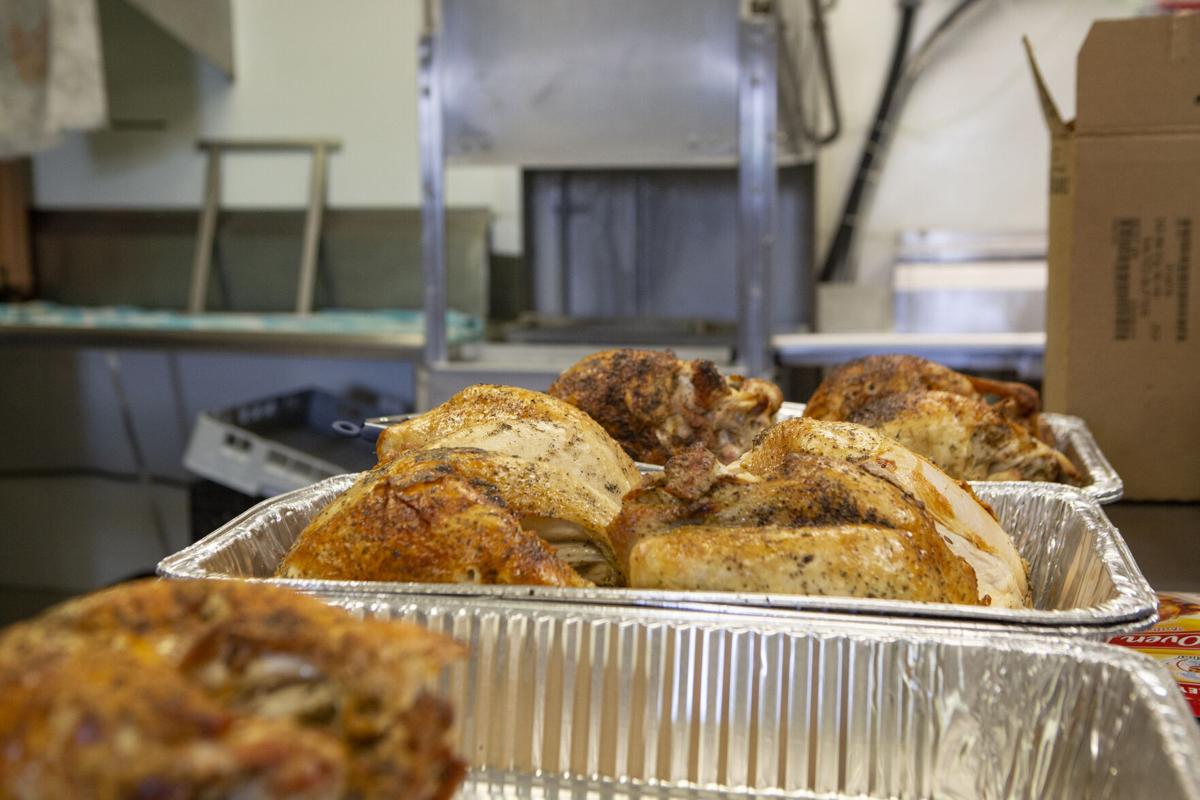 Cooked turkeys sit fresh out of the oven at the Salvation Army in Pendleton on Tuesday, Nov. 24, 2020, in advance of Thanksgiving.

Christopher Harvey cuts produce at the Salvation Army in Pendleton on Tuesday, Nov. 24, 2020, in advance of the Salvation Army’s annual Thanksgiving meal. This year the meal will be served to go with the option to pick up on-site or have food delivered.

Cooked turkeys sit fresh out of the oven at the Salvation Army in Pendleton on Tuesday, Nov. 24, 2020, in advance of Thanksgiving.

PENDLETON — Since the pandemic began, Maj. DeWayne Halstad of the Salvation Army has spent nearly every day in his car, driving hundreds of hours and delivering countless meals to those in need.

The organization has been hard at work for months, too, bringing thousands of meals to those who have lost their jobs during an economic catastrophe that has left one in eight American households without enough to eat, according to the New York Times.

“People have wanted help. They don’t know what they’re going to do,” Halstad said. “People lost jobs. They’ve wanted to come get some food. Some have just been passing through for a meal.”

Halstad estimates that before the pandemic, the Salvation Army would deliver as many as 50 meals a day. But when things took a turn for the worse, they began to deliver closer to 150 per day. And they haven’t been able to serve seconds like they used to.

But on Thanksgiving, the Salvation Army will be serving more than 200 to-go meals to those in need. They will also be delivering around 100 meals door-to-door, dozens more than in recent years, Halstad said.

People who would like to receive to-go meals — which include turkey, cranberry sauce, mashed potatoes, stuffing, pie with whipped cream and a roll — can get them at the Salvation Army’s main building in Pendleton, 150 S.E. Emigrant Ave.

Halstad said they will be focusing deliveries on senior citizens and people who are concerned for their health and do not wish to leave their homes.

In recent weeks, Halstad chatted with his volunteers, who were worried that, given the pandemic, people wouldn’t be as giving. The opposite has happened, as the local hospital and several businesses have donated food every week.

“When the pandemic hit, we were really worried about having donations drop, that people wouldn’t be giving,” he said. “But the community has really stepped up and helped. Otherwise, we wouldn’t be able to have the Thanksgiving that we’re doing.”

Halstad said that they have received support in the form of turkeys, potatoes and financial donations. The donations are needed, too, as the pandemic has made things much more expensive for the Salvation Army. Halstad estimates the organization is spending at least $10,000 more per year than most years on things like to-go boxes for delivering meals and water bottles.

Due to the pandemic, the number of volunteers for the Salvation Army Thanksgiving meal has been cut in half, from 20 to 10. They’ve also had to turn volunteers away to keep their numbers low and ensure they are remaining safe and cautious.

“It’s been really hard to get people out to work nowadays,” he said.

Despite the challenging times, Halstad said he hopes to raise $40,000 this holiday season. Halstad and the Salvation Army also have goals this holiday season to bring presents to 300 families as part of the “Rescue Christmas” program.

For Halstad, who is a pastor, not being able to minister to his congregation throughout the pandemic has been his biggest personal struggle. His biggest hope, though, is for next year to be better, and that soon enough things will resolve to some semblance of normalcy, all so that he can keep giving.