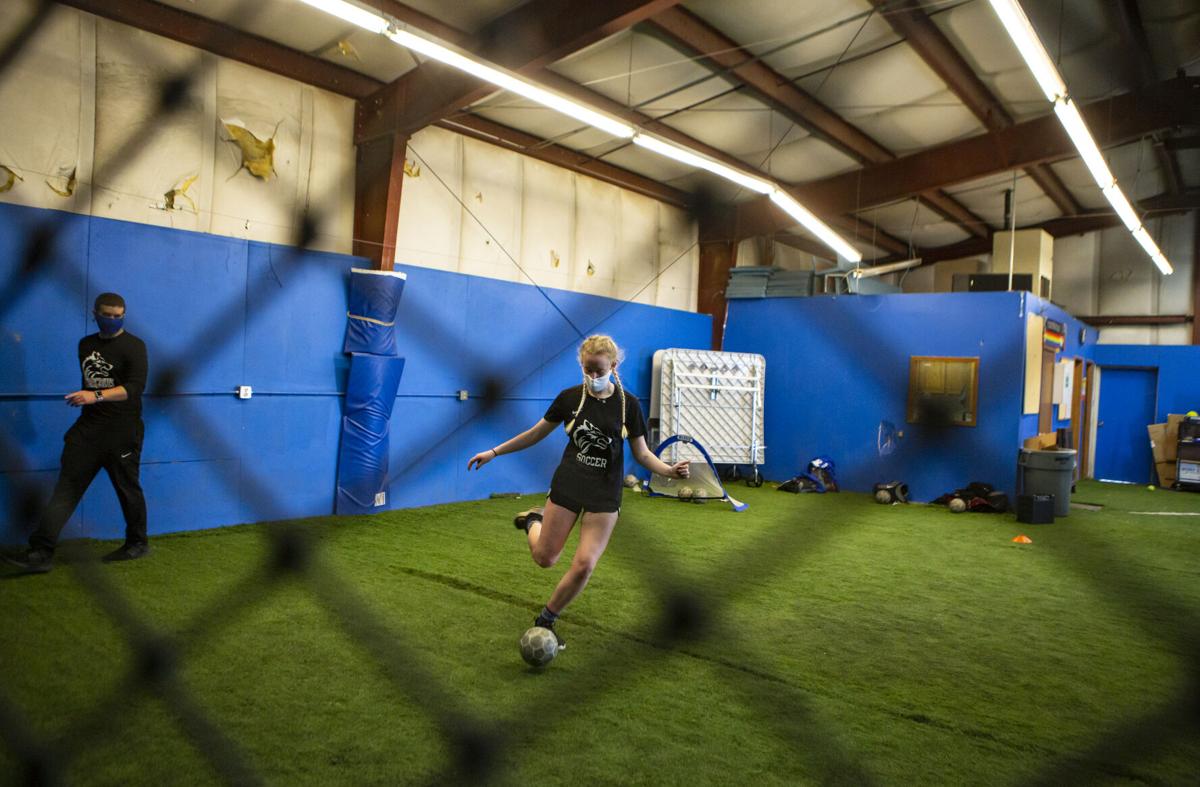 Megan Burchard kicks a soccer ball during a Blue Mountain Community College soccer practice at the college on Friday, Feb. 19, 2021. 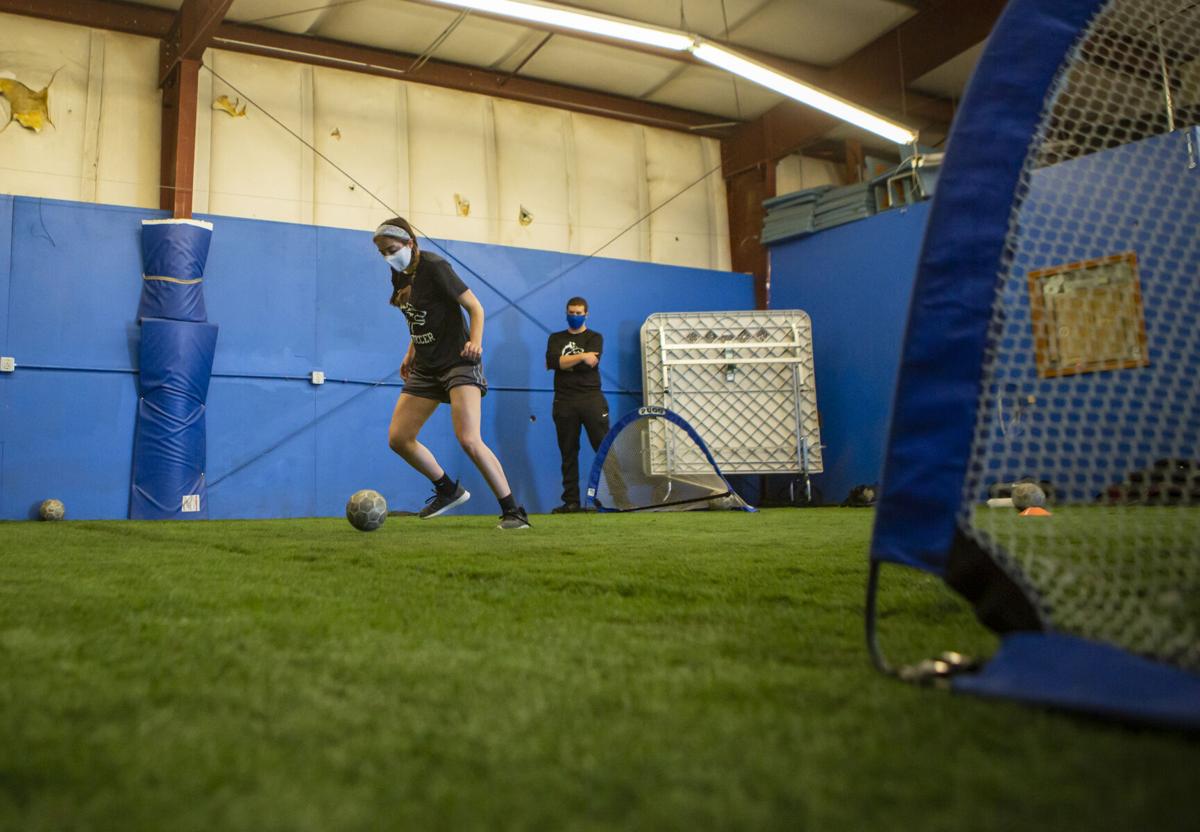 Josie Ash practices her ball handling under the eye of Blue Mountain Community College soccer coach Jordan Hillmick during a practice at the college on Friday, Feb. 19, 2021 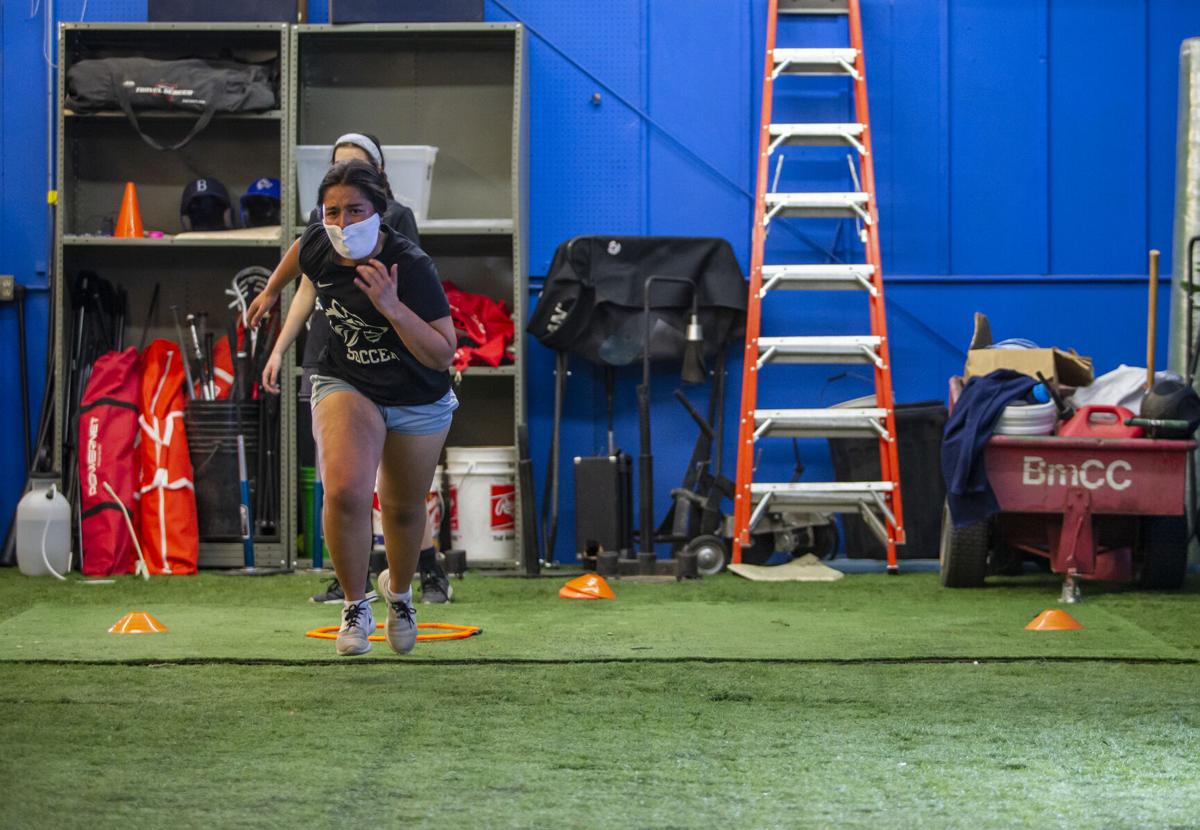 Jessica Macias sprints during a practice with the Blue Mountain Community College soccer team at the college on Friday, Feb. 19, 2021.

Megan Burchard kicks a soccer ball during a Blue Mountain Community College soccer practice at the college on Friday, Feb. 19, 2021.

Josie Ash practices her ball handling under the eye of Blue Mountain Community College soccer coach Jordan Hillmick during a practice at the college on Friday, Feb. 19, 2021

Jessica Macias sprints during a practice with the Blue Mountain Community College soccer team at the college on Friday, Feb. 19, 2021.

PENDLETON — After nearly a year of the COVID-19 pandemic, April 1 is the date circled on calendars for athletes and coaches from Blue Mountain Community College and other teams in the East Region of the Northwest Athletic Conference.

That’s when competition between teams in that region is slated to begin.

Member schools have been proceeding through the conference’s reentry phase this winter, and Marco Azurdia, the conference’s executive director, said he understands that for some students, athletics is a key part of their college experience.

“For them to not have that opportunity to compete and to take classes online has been a huge obstacle in terms of keeping student-athletes engaged,” Azurdia said. “Keeping them engaged so that they can get the most important thing, and that’s their education.”

At Blue Mountain, athletes began a two-week quarantine on Jan. 4 as part of the reentry procedure.

“It’s actually gone really successful, they did the two-week quarantine, all the athletes did an amazing job being able to work and understand,” Hillmick said.

Since the pandemic put sports on hold back in March 2020, NWAC schools have been relying on state guidelines. The conference has member schools in Oregon, Washington and Idaho.

“We were working hand-in-hand with OHA, the Governor’s Office, making sure our guidelines and our protocols here at the school, as well as the NWAC office did an amazing job in making sure our athletes were as taken care of as possible,” Hillmick said.

The initial two-week quarantine was the gray phase. During the red phase teams were allowed to have small group practices, and in the yellow phase they had larger team practices. During the green phase schools can have full team practices and games.

“Those schools that have chosen to come back in some fashion athletically, to practice or to work out with their teams with the goal of hopefully playing, the student-athletes have to go through this four-phase protocol,” Azurdia said.

Hillmick said he’s been impressed at how Blue Mountain coaches have adapted to the restrictions.

“Our basketball teams, when they weren’t allowed indoors in their own gym, they went to one of the public parks and went to practice under covered patios or the local basketball courts,” Hillmick said. “Same with our volleyball girls, they had a grass net so they set up a grass court.”

Hillmick said he’s pleased with the number of athletes who have shown up for spring sports practices as well, a reflection of coaches who continued to recruit during the spring of 2020 despite the challenges of the pandemic.

“Our baseball and softball coaches in the spring right when COVID hit attacked this (recruitment) head on,” Hillmick said. “They actually brought in the largest numbers I’d say our baseball team has seen in years.”

The condensed schedule also poses a challenge for coaches and players, Hillmick said.

“Not having a true preseason, the ability to slowly integrate and introduce the athletes into normal competitive play, I would say that would probably be the same for every one of the coaches,” Hillmick said. “We usually have scrimmages and games where we can slowly introduce our athletes to full contact play, they get that plenty in practice, but it’s definitely different than a game scenario.”

With traditional fall sports, such as soccer, being played during the spring, athletes in those sports will have an unusual challenge — preparing for a second competitive season in the same calendar year.

Hillmick said he’s interested to see how his players handle what will be a roughly six-week gap between the end of the spring season and the start of the usual fall season.

“Are those athletes recovering, rehabbing and resting in order to properly prepare for what is going to be two competitive seasons in the same calendar year, which is crazy,” Hillmick said.

During this spring’s schedule, each of the NWAC’s four divisions — East, West, North and South — will revise schedules if necessary should athletes test positive or be exposed to someone who tests positive.

“Logistics, when it comes to scheduling, we really left that up to each region,” Azurdia said.

Blue Mountain is prepared for any scenario, with the ultimate goal of keeping athletes safe, Hillmick said.

“They are prepped for pretty much everything,” he said. “Trying to operate across state lines is tough, but we have found good solutions in order to make sure our athletes get back to the field as safely as possible.”

Azurdia asks fans and student-athletes to keep two things in mind moving forward with sports during the pandemic.

“People need to balance their passion with their perspective here, what really is the big picture here?” he said.

Although athletics are set to return in April, fans will not be able to attend. They are encouraged to watch Blue Mountain Community College sporting events available on the college’s YouTube page.

Schedules and other information for the Timberwolves are available at www.bmcctimberwolves.com.

For more information involving NWAC and its “Return to Play,” protocols, go to www.nwacsports.org.