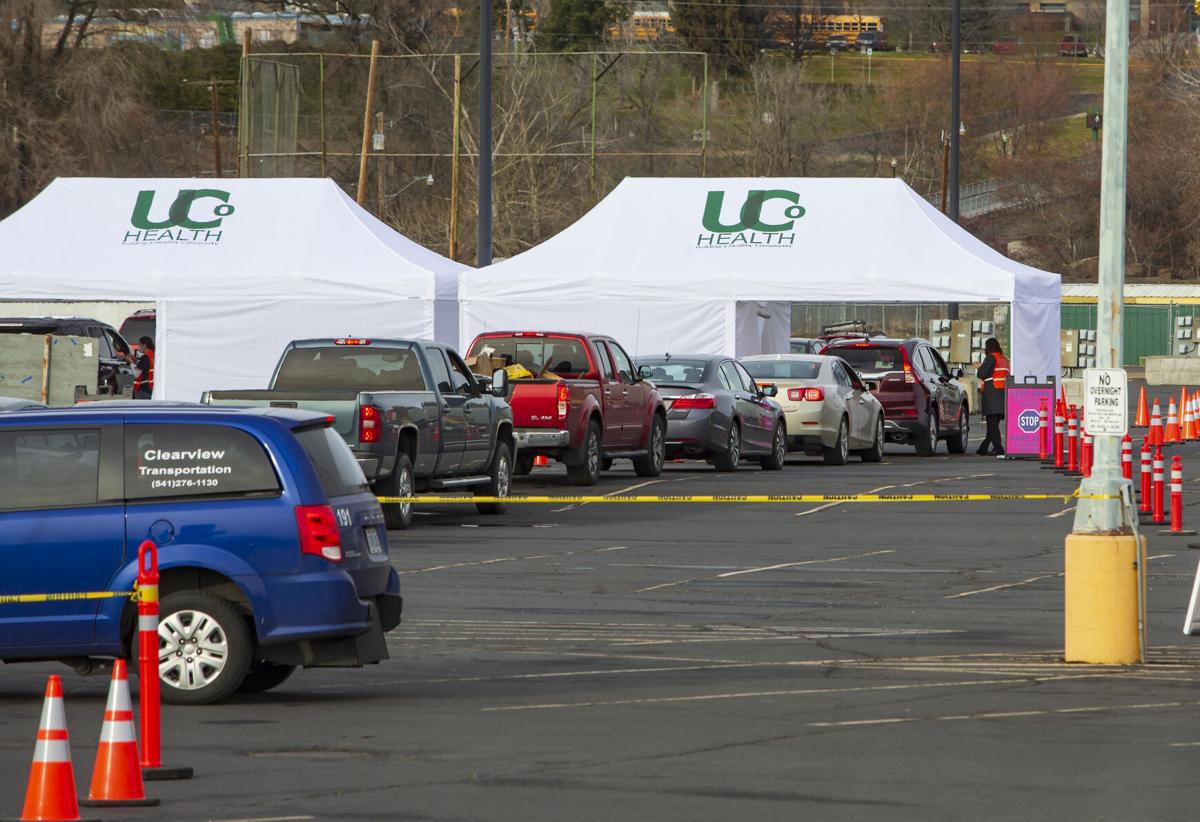 Cars line up for COVID-19 vaccinations during a Umatilla County Public Health vaccination clinic at the Pendleton Convention center on Jan 7, 2021. 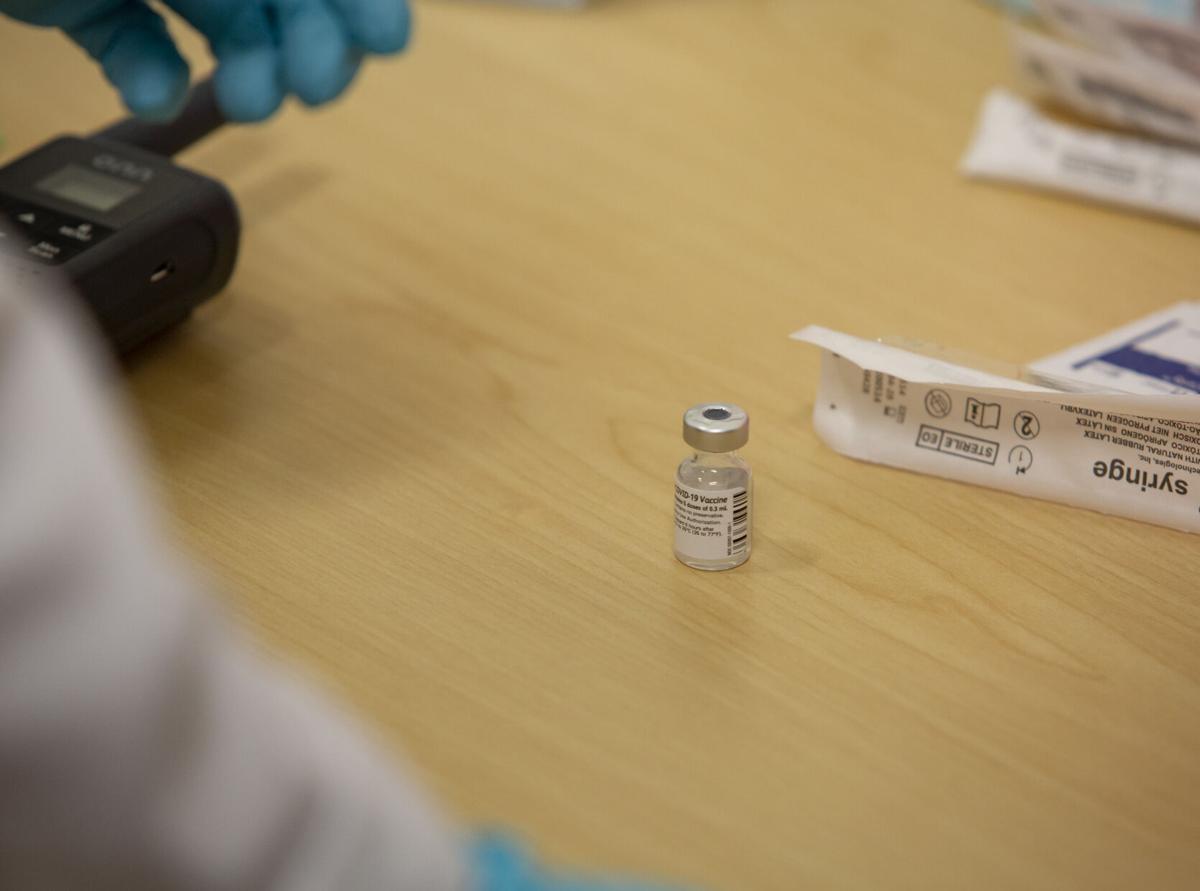 A bottle of the COVID-19 vaccine sits on the counter at Yellowhawk Tribal Health Center in Mission on Dec. 18, 2020.

Cars line up for COVID-19 vaccinations during a Umatilla County Public Health vaccination clinic at the Pendleton Convention center on Jan 7, 2021.

A bottle of the COVID-19 vaccine sits on the counter at Yellowhawk Tribal Health Center in Mission on Dec. 18, 2020.

PENDLETON — Umatilla County Public Health has received approximately 1,000 doses of the Moderna COVID-19 vaccine and will be holding a drive-thru event on Friday, Jan. 22, at the Pendleton Convention Center to immunize a group specified by the Oregon Health Authority.

Those eligible to receive the vaccine at the Jan. 22 event include traditional health care workers who provide in-person services, long-term care facilities that were not covered by the Federal Pharmacy Partnership, home health providers, people with intellectual and developmental disabilities and their caregivers, and other congregate care facilities in Phase 1a.

The health department said the allocation is not for individuals in other Phase 1a or 1b groups, including schoolteachers and people over the age of 65.

The event will take place from 8 a.m. to 6 p.m., according to the press release. The health department added that it is prepared to hold weekly clinics “pending vaccine allocation” from the state.

The new shipment comes as county health officials learned on Wednesday, Jan. 20, the state would be sending vaccines from a reserve of around 20,000 doses originally slated to be used as second doses, according to Joe Fiumara, the county’s health director. However, many of these doses were paired with first doses that had yet to reach the arms of Oregonians, so the state has decided that certain counties will receive shipments.

“Rather than (the vaccines) sitting on a shelf, they’ve dished some of them out to these counties, like us, that have a significant portion of the Phase 1a population that has not been sufficiently” immunized, he said.

Doses from that reserve will now be used in Umatilla County to help immunize a variety of groups, including workers from long-term care facilities that were not covered by the Federal Pharmacy Partnership, a national effort to send retail pharmacists into nursing homes to ramp up COVID-19 immunization efforts after a sluggish initial rollout.

Fiumara said the county has reached an agreement with the state to help bring vaccines to eight different long-term care facilities that did not receive vaccines despite being part of the federal partnership.

The new doses come after the Oregon Health Authority informed the county last week that they would not be receiving doses, forcing the county to cancel two scheduled events. Now that the new shipment has arrived, health officials are preparing to reach out to long-term care facilities to begin inoculating residents and workers perhaps as early as Jan. 21.

The county’s agreement with OHA also said health officials must administer all 1,000 doses in the next seven days, Fiumara said.

Fiumara said the health department is expecting to learn how many vaccines the county will receive in its next shipment on Jan. 21. That next shipment will partly determine whether the county can begin vaccinating educators next week or not, Fiumara said.

Gov. Kate Brown announced last week that educators will be eligible to begin receiving the vaccine on Monday, Jan. 25, but seniors over the age of 80 will have to wait until Feb. 8, followed by people over the age of 75 on Feb. 15, 70-plus on Feb. 22 and 65-plus on March 1.

“It’s going to be really hard to focus on educators next week if we still have a lot of long-term care facilities that need to get covered,” Fiumara said, adding the health department is still concerned they may be perhaps 1,000 doses short in sufficiently covering the Phase 1a group.

Umatilla County has immunized 2,472 total residents since efforts began in late December 2020, according to data from the county health department.

“Vaccination gives us hope that the pandemic will end,” the press release said, “but in the meantime, we need to continue safety measures to keep the virus from spreading: wear a mask, physically distance from others, wash your hands, avoid gatherings and stay home when you are sick.”