UMATILLA COUNTY — A fifth person has tested positive for COVID-19 in Umatilla County.

Umatilla County Public Health did not release any information about the patient, other than they are self-isolating at home, and did not indicate whether the person had been in contact with any other confirmed cases. The department has stated it is not releasing cities of residence or other demographic information in order to protect the privacy of the patients. 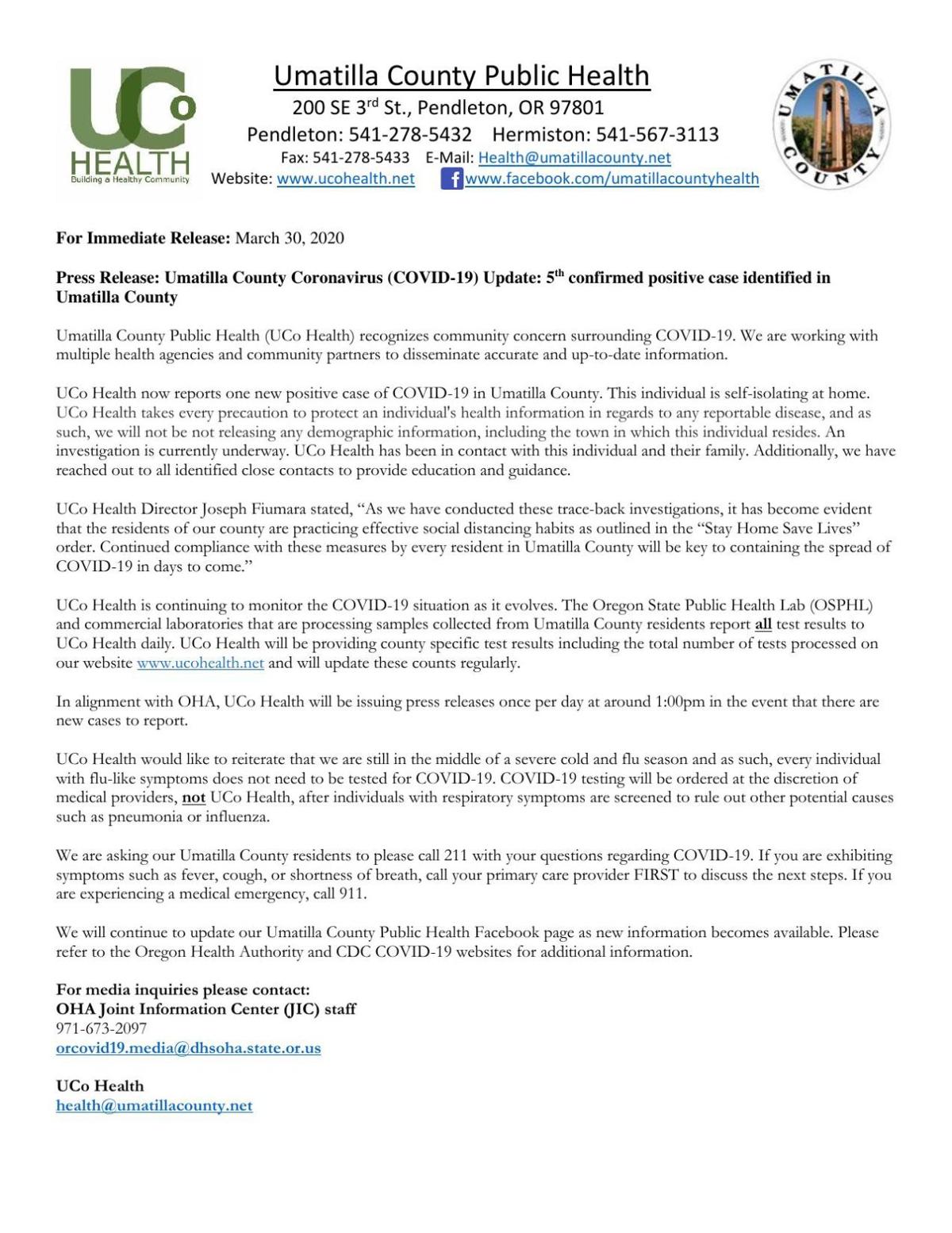 The department did state that it has been in contact with the individual, their family and “all identified close contacts.”

“As we have conducted these trace-back investigations, it has become evident that the residents of our county are practicing effective social distancing habits as outlined in the ‘Stay Home Save Lives’ order,” public health director Joe Fiumara said in a statement. “Continued compliance with these measures by every resident in Umatilla County will be key to containing the spread of COVID-19 in days to come.”

According to the news release, all COVID-19 samples collected within the county, whether processed in a commercial lab or the Oregon State Public Health Lab, are reported to Umatilla County Public Health daily. So far, there have been five positive tests and 133 negative ones.

As of Monday morning, the Oregon Health Authority announced the state was up to 606 confirmed cases and 16 deaths.

The public health department stated in its news release that the state is “still in the middle of a severe cold and flu season” and as such, not everyone with respiratory symptoms needs to be tested. Patients can be tested at the discretion of their health care provider after other illnesses, such as influenza and pneumonia, have been ruled out.

Anyone experiencing symptoms, such as fever, cough or shortness of breath should call their primary care provider first to discuss next steps.

The county announced a pair of cases — the third and fourth — last week.

The state health department first announced on March 2 that a Umatilla County resident had been diagnosed with a presumptive case of COVID-19 after attending a youth basketball game at the Weston Middle School gym. The resident also is an employee of Wildhorse Resort & Casino.

At the time, it was the third documented case in Oregon and the first in Eastern Oregon.

According to the county’s public health department, the region’s second case was announced March 11 and was identified as a person who was in “prolonged close contact” with the first person who tested positive for the virus on March 2.

Presumptive positive tests were initially required to be sent to the Centers for Disease Control and Prevention for confirmation, but those requirements have since been lifted and the Oregon Health Authority stopped reporting the number of tests confirmed by the CDC on March 15.