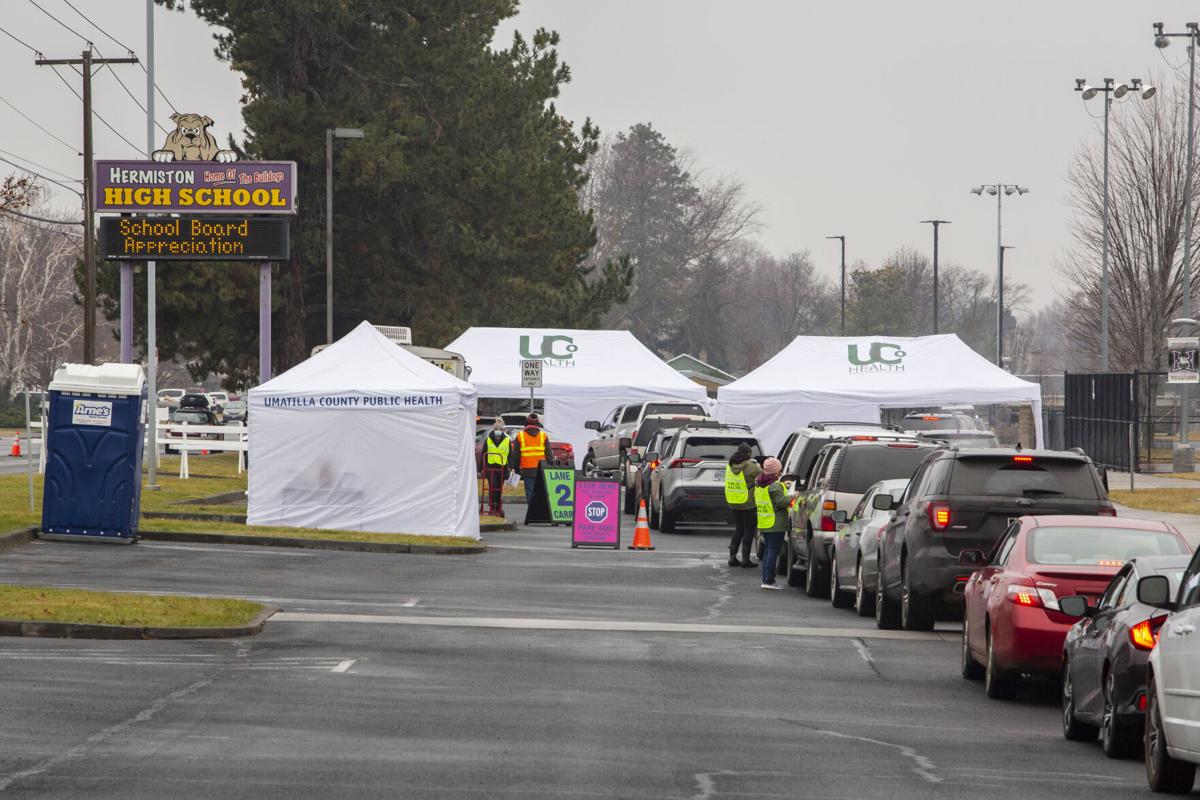 Vehicles line the parking lot at Hermiston High School as teachers wait to receive their first dose of the COVID-19 vaccine on Jan. 29, 2021. 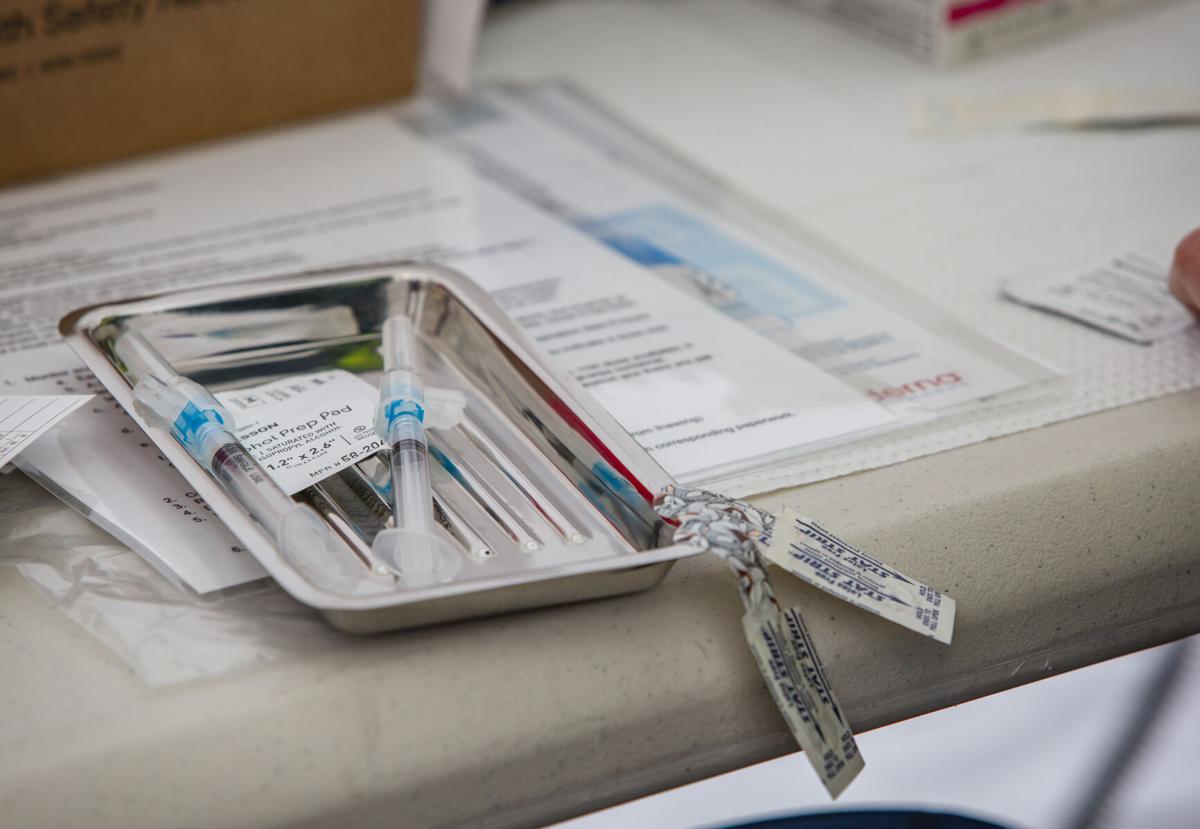 Syringes with doses of the Moderna COVID-19 vaccine sit ready to be administered during a drive-thru COVID-19 vaccination clinic at the Pendleton Convention Center on Jan. 22, 2021.

Vehicles line the parking lot at Hermiston High School as teachers wait to receive their first dose of the COVID-19 vaccine on Jan. 29, 2021.

Syringes with doses of the Moderna COVID-19 vaccine sit ready to be administered during a drive-thru COVID-19 vaccination clinic at the Pendleton Convention Center on Jan. 22, 2021.

PENDLETON — Vaccine efforts in Umatilla County are on standby after a shipment of doses was canceled earlier this week due to inclement weather. The delays forced health officials to postpone a drive-thru clinic in Pendleton as the county fell to the second lowest in Oregon for COVID-19 vaccinations per capita.

Now, as eligibility expands to Oregon seniors over the age of 75 on Monday, Feb. 22, making thousands of additional county residents able to receive the vaccine, health officials are eagerly anticipating further shipments.

However, the state has yet to provide a concrete timeline for when the next promised shipments should arrive, raising concerns that further delays and a bottleneck effect could be possible, according to Joe Fiumara, the county’s public health director.

“I’m telling people that it’s a tentative date,” Fiumara said of the upcoming vaccine shipments. “The reporting I got from (the Oregon Health Authority on Friday, Feb. 19) is that they are still having issues getting shipments out, and they’re not able to be very firm on when our shipment will get here.”

The doses are shipped from Tennessee, where winter conditions have halted vaccine distribution, creating widespread delays and forcing hundreds of vaccine sites across several states to cancel, according to the Centers for Disease Control and Prevention.

The state has informed the county to expect the promised doses to arrive “sometime between Feb. 22 and Feb. 24,” Fiumara said. The county, however, is planning the vaccine event it postponed this week for Wednesday, Feb. 24, and if the promised shipment arrives that day, the health department will have to postpone yet another event.

“I really don’t want to postpone again,” he said. “At that point it just gets really, really messy.”

To add to the confusion, state officials also informed Fiumara that because of this week’s delay, the shipment of vaccine already planned for next week will also be delayed, pushing it back near the end of the week when the county had already planned two more vaccine events.

“That puts all three of our events next week on edge,” he said, adding that the county will revisit scheduling the events on Feb. 22 when they hope to have tracking information on when to expect more shipments.

The hodgepodge of delays and cancellations comes as Umatilla County drops to the second lowest vaccination rate of any county in Oregon, with approximately 785 people vaccinated per 10,000 people, according to data from OHA as of Thursday, Feb. 18.

Fiumara said a combination of factors have caused the low totals, including small shipments from the state, the county’s comparatively small Phase 1a population and the frequency at which it exhausts its allocated supply, like it did by Feb. 19.

“I don’t like it, but I’m not surprised by where we’re at,” he said. “We kicked this out about as fast as we could.”

Fiumara said he expects totals to level out as the county is able to vaccinate more elderly residents, which make up a greater portion of the population than teachers, health care workers and other individuals who have already been eligible to receive a vaccine.

“At the very least, we shouldn’t fall further behind,” he said. “Hopefully we can gain some ground, but it all depends on what (the state) gives. We’re giving it out, but it just isn’t arriving as fast as we would like.”

The delays could also force the county to postpone providing second doses to residents as well, Fiumara said, pushing them past the designated six-week time frame.

“The assumption by most is that it shouldn’t hurt anything,” he said of receiving a second dose after the six-week period. “But we don’t know if it will have a lower-efficacy rate. At the same token, it could be higher. The fact is that there’s no known data, so we try to hold to that (six-week) date as close as we can.”

Next week, the county is expecting to receive increased shipments of vaccines due to changes on the federal level. Barring further inclement weather delays, the county should receive 300 doses that would have arrived this past week and a new allocation of 700 prime doses — 300 of which will go directly to Mirasol Family Health Center in Hermiston.

In addition, the county’s Safeways, in Pendleton, Hermiston and Milton-Freewater, will continue to receive 100 doses each. It’s possible that pharmacies like Safeway will see increased allocations in the coming weeks due to shifts at the federal level, Fiumara said.

“We’re told this is what we should plan for and expect,” he said of the new shipments. “There may be some of these weeks where we get more, and if we get more, that’s just better for everybody.”

Fiumara said the increased supply of vaccines should continue for about a month, and perhaps beyond that point. He said officials have seemed so confident that it prompted the health department to schedule events through April, so that if residents miss an availability one week, they know roughly when they can receive the vaccine next.

Umatilla County Public Health released a schedule for COVID-19 vaccinations that runs through the end of April on Thursday, Feb. 18.