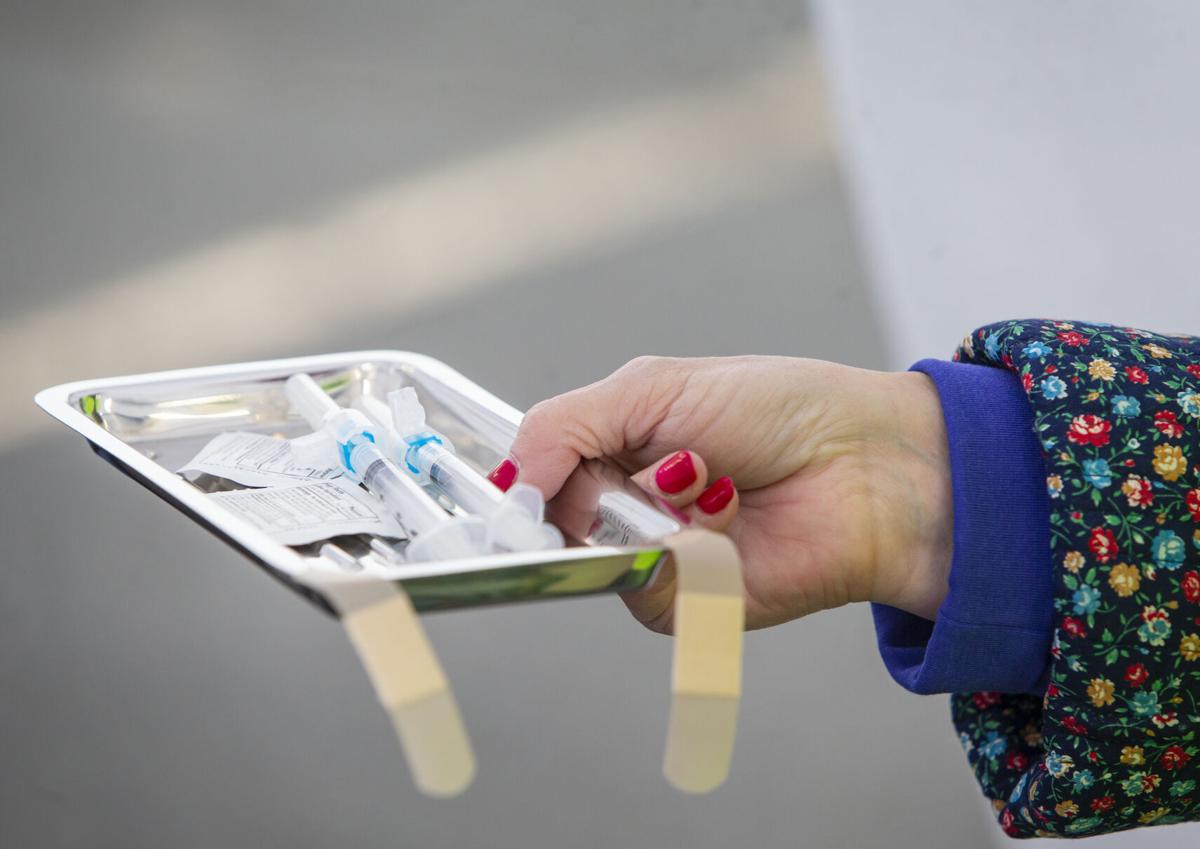 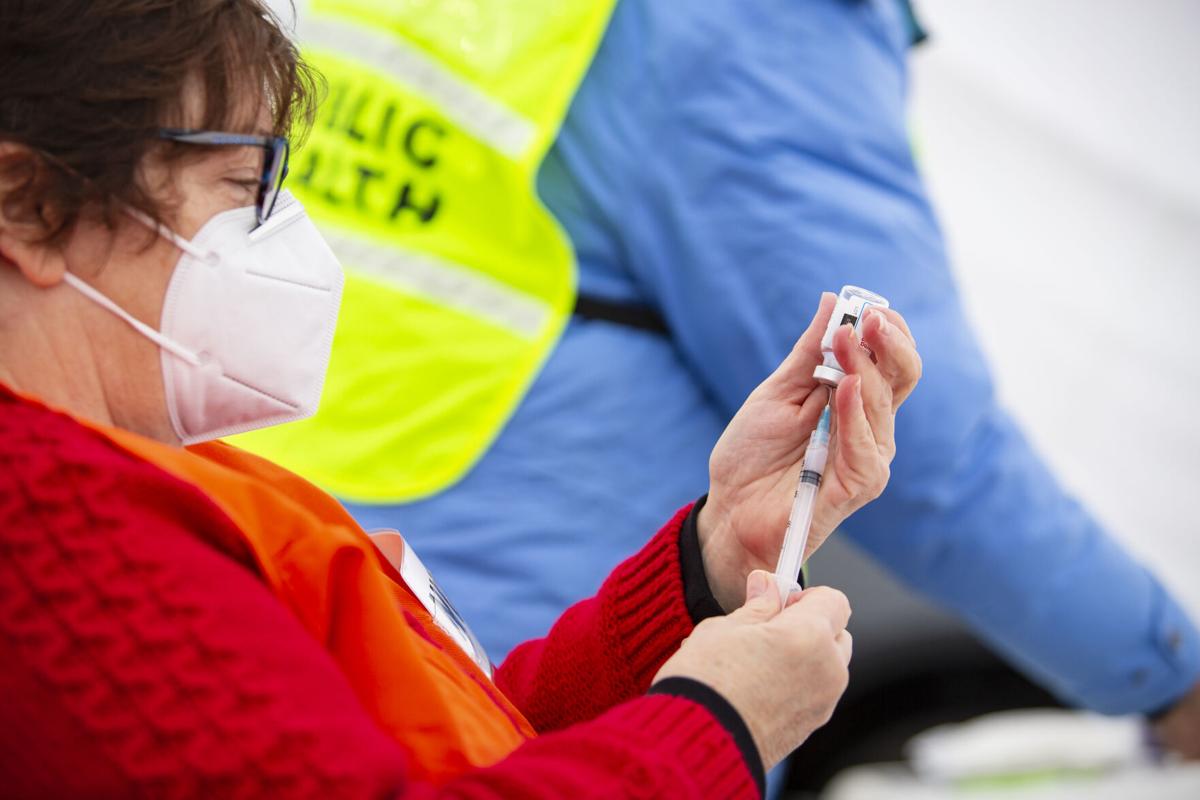 Retired registered nurse Sharon Waldern volunteers to draw up doses of the Moderna COVID-19 vaccine during a Umatilla County vaccination clinic at the Pendleton Convention Center on Friday, Jan. 22, 2021.

Retired registered nurse Sharon Waldern volunteers to draw up doses of the Moderna COVID-19 vaccine during a Umatilla County vaccination clinic at the Pendleton Convention Center on Friday, Jan. 22, 2021.

PENDLETON — Umatilla County is scheduled to receive 400 doses of the COVID-19 vaccine to begin vaccinating elderly residents next week as Oregonians over the age of 80 become eligible starting Sunday, Feb. 7, according to the county health department.

The new vaccine supply will be distributed across the county, with 100 doses going to Mirasol Family Health Center in Hermiston and 100 more to Good Shepherd Medical Center in Hermiston. In addition, 100 doses will be available at both the Umatilla County Health Department in Pendleton on Wednesday, Feb. 10, and the Milton-Freewater Community Building on Thursday, Feb. 11, according to Joe Fiumara, the county’s public health director.

Those who wish to be vaccinated in Pendleton or Milton-Freewater must make an appointment before arriving by calling 541-278-6311. The phone line will close when available appointments have been filled, according to health officials.

Vaccination appointments at Mirasol in Hermiston can be scheduled over the phone at 541-567-1717 starting at 8 a.m. on Monday, Feb. 8. Good Shepherd will be holding walk-in appointments starting at 7 a.m. on Friday, Feb. 12, according to a press release from the health department.

Fiumara said that the supply is better than he feared the county would receive, but added that it’s not nearly enough to satisfy the roughly 2,500 residents who will become eligible next week.

“A lot of people are unhappy and frustrated, I know, because there’s only going to be about 400 of those folks who are going to be able to get a shot next week,” he said.

The new doses come as Gov. Kate Brown announced in a press conference on Friday, Feb. 5, that the White House is planning to increase Oregon’s allotments of COVID-19 vaccine by 20% in the coming weeks.

The increase will ramp up vaccination efforts so that most of the state’s seniors, educators and health care workers will be fully vaccinated by May, a month earlier than previously anticipated, according to Oregon Health Authority Director Patrick Allen.

Allen said the increase should allow the state to offer first doses to approximately 75% of all eligible seniors over the age of 65, educators, inmates, and Phase 1a members by April, when the state plans to open up eligibility to new groups, like essential workers and people with underlying health conditions.

Each week through February, a new group of elderly residents will become eligible to receive the vaccine, per state guidelines. People ages 75-79 will be eligible starting Sunday, Feb. 14, 70-74 starting Feb. 21, and 65-69 starting Feb. 28.

Fiumara estimates that between 3,000 to 4,000 additional county residents will become eligible each week. However, the county health department is expecting just 300 to 400 additional doses from the state each week through February.

For the next three weeks, Fiumara said he is expecting “a lot of calls, a lot of upset folks, a lot of frustration, and we won’t have an answer that will satisfy.”

Fiumara said the slow rollout is partly due to vaccines now being fast-tracked to the roughly 11,000 adults in custody at Oregon prisons after a federal judge on Tuesday, Feb. 2, ordered the state to immediately begin offering them the vaccine. The order came during a larger case from a group of inmates who criticized state officials and Brown for their response COVID-19 outbreaks in Oregon prisons, saying that the state has violated the U.S. Constitution.

Brown announced in the Feb. 5 press conference that vaccine eligibility will also immediately expand to the thousands of Oregonians in jails and youth correctional facilities.

Case counts in Oregon prisons increased dramatically in the past two months, with more than 1,900 new cases reported among adults in custody through December 2020 and January. In the first eight months of the pandemic, 1,400 cases were reported in Oregon prisons.

Twenty inmates with COVID-19 died in January alone, with 15 of those reported at Two Rivers Correctional Institution in Umatilla.

Since the pandemic began, 3,413 adults in custody in Oregon have tested positive for COVID-19 and 42 have died.

The health department administered about 540 doses on Thursday, Feb. 4, at the Pendleton Convention Center through its drive-thru clinic. The department planned to administer 340 more on Feb. 5, which would most likely exhaust the county’s current supply, Fiumara said.

About 600 doses administered this week were second doses, Fiumara said, adding the department is slated to receive about 1,000 doses each week to vaccinate people a second time, making them fully immunized against the virus.

Since county vaccination efforts began in late December 2020, 5,092 people have been vaccinated against COVID-19, with 1,270 of those having received a second dose, according to data from the Oregon Health Authority.

In all, Umatilla County has reported 7,307 presumed and confirmed coronavirus cases and 76 deaths. The county’s testing positivity rate is the third highest in the state at 13.5%, according to an Oregonian/OregonLive database.