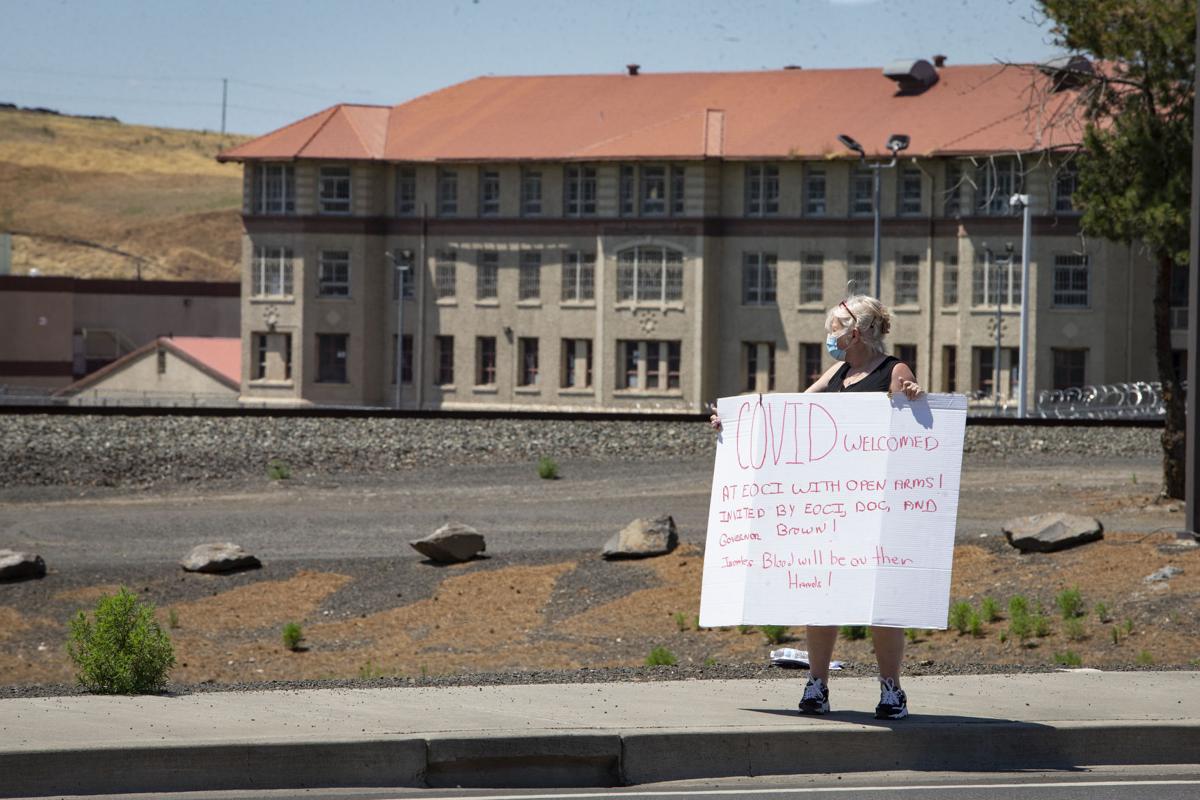 Barbara Dickerson protests in support of stronger COVID-19 precautions in prisons outside of Eastern Oregon Correctional Institution in Pendleton on Friday, July 10, 2020. Dickerson’s husband is an inmate at EOCI who tested positive for COVID-19, and she alleges the prison is not doing enough to protect its inmates. 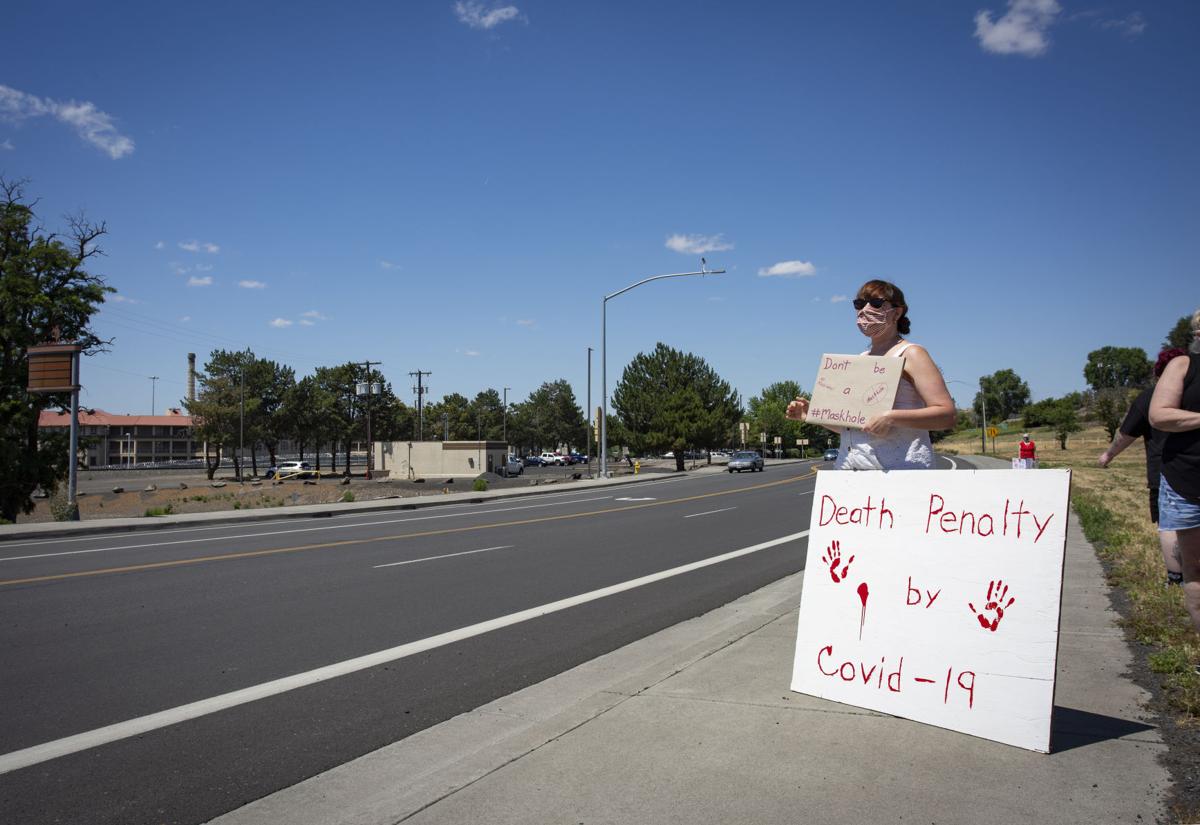 A group of protesters gather along Westgate across the street from Eastern Oregon Correctional Institution in Pendleton on Friday, July 10, 2020, to protest in favor of stronger COVID-19 restrictions in Oregon’s prisons. 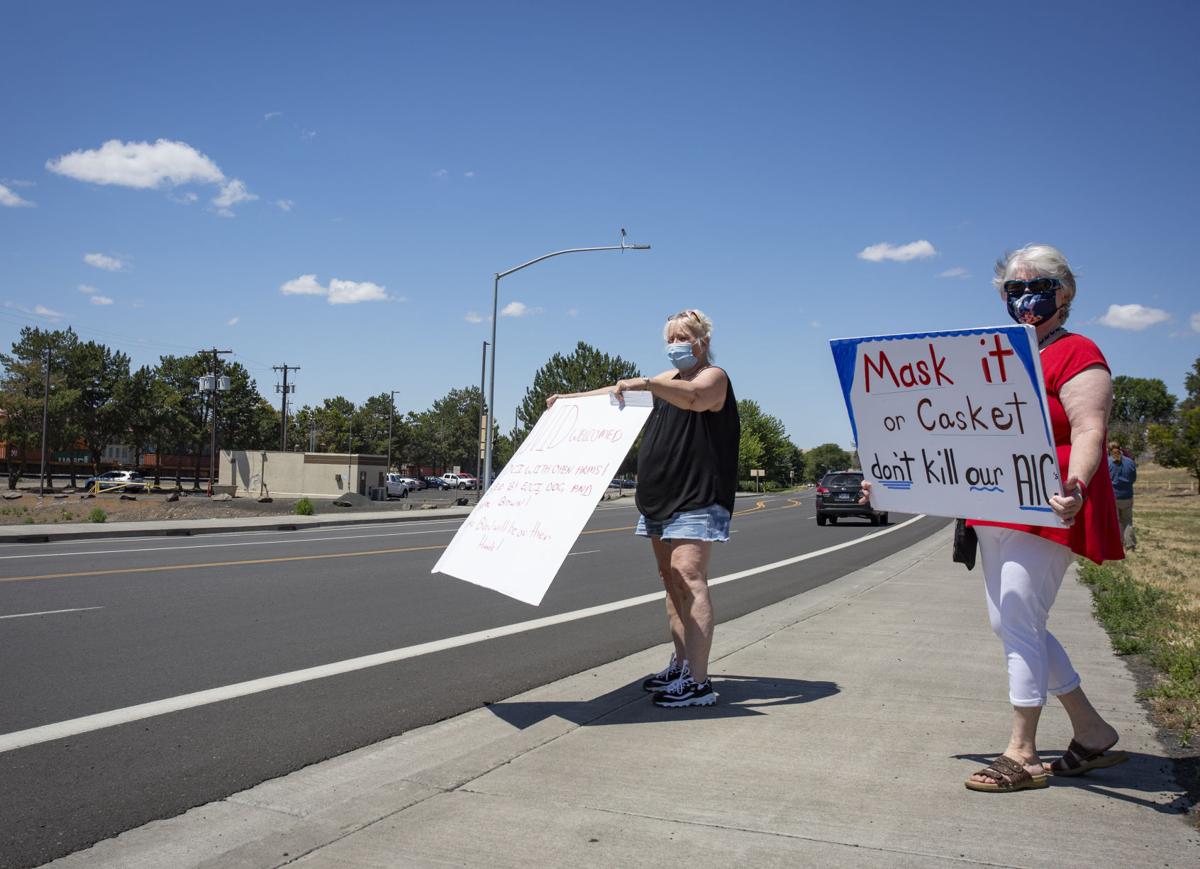 Barbara Dickerson, left, and Patty Youngblood protest in favor of stronger COVID-19 precautions inside of Oregon’s prisons across the street from Eastern Oregon Correctional Institution in Pendleton on Friday, July 10, 2020.

Barbara Dickerson protests in support of stronger COVID-19 precautions in prisons outside of Eastern Oregon Correctional Institution in Pendleton on Friday, July 10, 2020. Dickerson’s husband is an inmate at EOCI who tested positive for COVID-19, and she alleges the prison is not doing enough to protect its inmates.

A group of protesters gather along Westgate across the street from Eastern Oregon Correctional Institution in Pendleton on Friday, July 10, 2020, to protest in favor of stronger COVID-19 restrictions in Oregon’s prisons.

Barbara Dickerson, left, and Patty Youngblood protest in favor of stronger COVID-19 precautions inside of Oregon’s prisons across the street from Eastern Oregon Correctional Institution in Pendleton on Friday, July 10, 2020.

PENDLETON — Lydia Jarrell stood looking across Westgate in Pendleton at the fenced-off exterior of Eastern Oregon Correctional Institution on Friday, July 10. A few hundred yards away from the facility is the closest she’s physically been to her husband in over four months since visitations ceased at the Pendleton prison in February due to a flu outbreak and then were later suspended statewide in March due to COVID-19.

Jarrell’s husband is one of the roughly 1,700 men incarcerated at EOCI, which announced its first confirmed cases on Wednesday, July 8, and went into a 14-day quarantine due to an outbreak of the virus on Monday, July 13.

As of July 13, there are 19 cases in the facility, 16 of which are inmates and three that are staff, according to prison officials.

The cases at EOCI are just the latest in Oregon’s prisons, which to date has reported 398 total cases in state prisons, 315 among inmates and 83 among staff. One inmate has reportedly died from the virus.

The ability for COVID-19 to spread quickly though crowded, indoor settings is a terrifying situation for those with loved ones inside the system like Jarrell, who stood outside in the afternoon heat to protest following a short nap to recover from clocking off from work at 5 a.m. that morning.

“These are our husbands, our sons, our fathers, our brothers, our uncles, our loved ones,” she said, choking back tears. “This is already a scary time as it is, and we’re stuck out here worrying about them in there — helpless — with nothing we can do.”

Jarrell joined three other women with loved ones in the Oregon prison system outside of the Pendleton institution on July 10, in protest of what they say are dangerous conditions as a result of callous negligence from Gov. Kate Brown and the Oregon Department of Corrections.

“Some of these guys are sentenced to a few years, or a year but it’s turning into a death sentence for them,” Jarrell said.

Among their many concerns are that correctional officers working inside the state’s prisons aren’t being required to wear masks at all times while on duty despite Brown’s executive order mandating they be worn at all times in indoor public spaces throughout the state.

“Our concern is that masks have been mandated by our governor. And if the DOC doesn’t enforce that the superintendents enforce it within their prisons — they’re jeopardizing not only our loved ones inside, but of taking it home and jeopardizing their families,” said Patty Youngblood, whose son is incarcerated at EOCI.

The Oregon Department of Corrections’ current policy requires prison staff and inmates to wear masks when they cannot maintain six feet of physical distance. Masks have also been mandated for all inmates in medical and food areas, along with some work locations.

“EOCI has followed the guidelines established by the Agency Operations Center in conjunction with the DOC Chief Medical Officer, Oregon Health Authority and Centers for Disease Control and Prevention,” EOCI Public Information Officer Ron Miles stated in an email.

“At this time all staff at EOCI are required to wear a face covering if they are in a situation where social distancing is impossible. Supervisory personnel from all areas of the institution are responsible for addressing staff if they are not complying.”

The Department of Corrections has stated it’s testing and screening all symptomatic inmates, isolating and quarantining those believed to have the virus or come in contact with it, and conducting contact tracing investigations on those who test positive.

As of July 13, 11 of the prison’s 20 units where roughly 1,000 inmates live are under quarantine due to potential exposure to the virus, Miles stated in an email.

Oregon Department of Corrections policies require all staff to be screened for symptoms and have their temperature taken before each shift. If they fail a portion of the screening, then a second screening is done within five minutes of the first to rule out environmental factors.

“If it is a symptom that is common to other issues such as allergies, the secondary screening involves asking if this is a common symptom that has been dealt with before and is familiar to the staff member,” Miles stated in an email.

“If it is a new symptom for the staff member, we send them home for the day with a letter from the Department confirming they are essential personnel. If the symptom passes, they may return to work the next day and if they clear the screening process, they can return to work.”

But those protesting on July 10 fear the screening process can too easily allow for those who may have mild symptoms to show up for work, which the Umatilla County Public Health Department has attributed a majority of the recent local surge of the virus to.

Many of these policies, along with additional sanitization protocols and social distancing guidelines, have been in place throughout the state’s prisons since March.

But Barbara Dickerson, whose husband is incarcerated at EOCI, is furious that a step like not mandating correctional officers wear masks at all times on duty may be undermining any protections that are in place.

Dickerson said her husband, who is a “69-year-old brittle diabetic with three stent placements,” was the first inmate at EOCI to test positive for the virus last week, which she attributes to a correctional officer spreading it by not wearing a mask.

“I hold them totally responsible for him getting COVID,” she said

Though contact tracing is being done, Miles stated in an email on July 13 that the primary source of transmission will likely never be confirmed.

“Certainly the virus had to come in from the outside but with more than 400 employees and some AIC (adults in custody) transfers during the last several months we will likely never be able to identify exactly when or how it came in,” he stated.

Dickerson said her husband was scheduled to be released on July 21 and the state’s reluctance to grant early release to inmates whose sentences are nearly over is only aiding the overcrowding that makes social distancing in prisons so challenging.

According to a July 10 email from Miles, the prison has tried to promote social distancing by posting flyers around the facility, reminding inmates and staff to follow the guidelines, limiting the number of people in usually busy areas, and suspending recreational activities with shared items, among others.

Brown approved the early release of 57 people on June 25, which accounts for less than 1% of the more than 14,000 people incarcerated in Oregon prisons.

One inmate at EOCI had his sentence commuted but a firm release date is not known at this time, according to Miles.

Dickerson said she’s been fighting since the pandemic began to get her husband out by writing letters to Brown, state legislators and DOC staff. A number of lawsuits have been filed on behalf of inmates throughout the state seeking release and additional protections from the virus for those incarcerated, and Dickerson said she’s reaching out to attorneys in order to get one filed for her husband.

Though she says she can only directly advocate for the early release of her husband and those with similar conditions and sentences, Dickerson wants better protections for everybody inside regardless of why they’re in there and how long they have.

“They’ve done nothing to protect these inmates — any of them,” Dickerson said. “I don’t care what they did. Do I approve of what they did? Probably not. But they’re human beings.”

While trying to keep herself safe from the virus and navigating widespread instability brought by the pandemic and everything 2020 has had to offer, Jarrell is getting by with occasional phone calls to her husband in place of the three or four visits a week they used to have together at the prison.

Jarrell is gong to keep writing her own letters to the governor and will keep getting up to protest on half of a night’s worth of sleep if she has to in order to secure more protections for those incarcerated.

But as she stood across the street from the prison, sign in hand and mask strung across her face on July 10, she admitted it’s hard not to feel helpless and let her mind drift to the worse-case scenario.

“That’s my worst fear,” Jarrell said. “That something is going to happen and I’m not going to get my husband home alive.”

UMATILLA COUNTY — Jeanie Lemens wants the community to think about people like her.