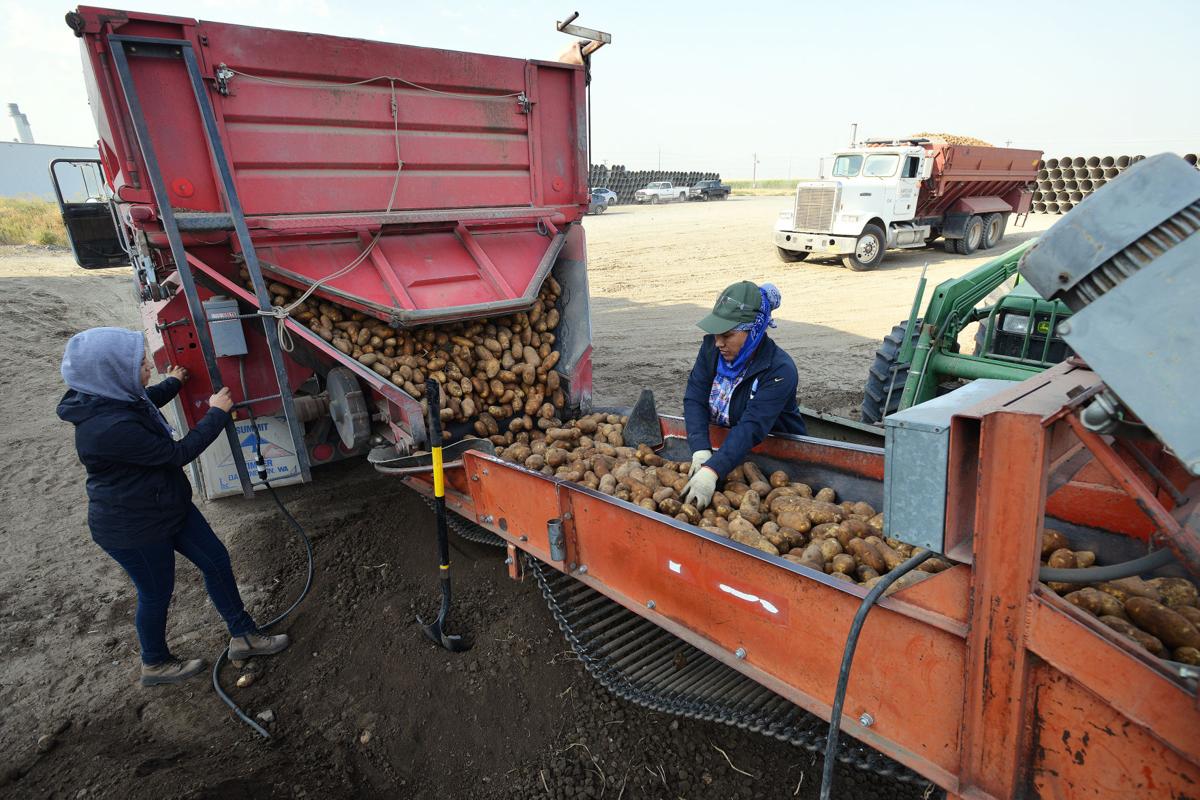 Hillary Fernandez of Stanfield releases a gate on the back of a potato truck as Estella Dueñez of Hermiston sorts Russet potatoes as they move down a conveyor belt on Tuesday outside of Hermiston. 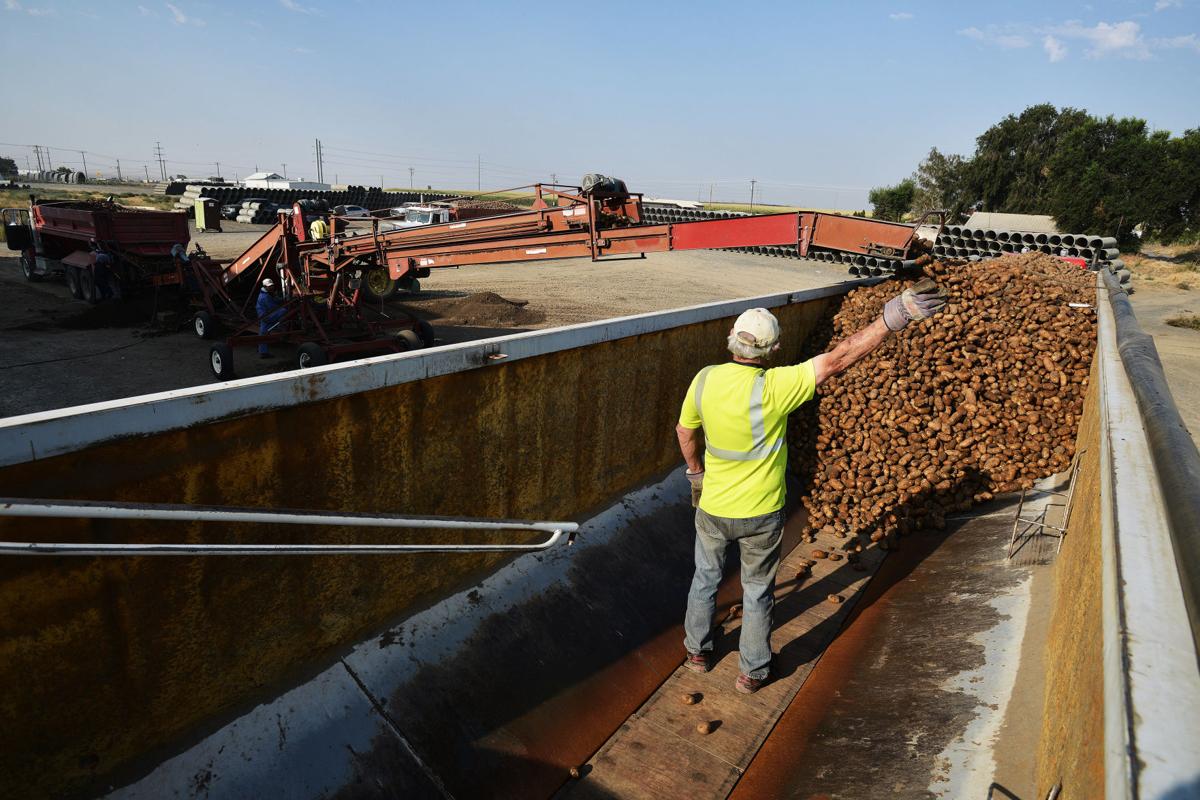 Max Tannery of Sherwood, Oregon, signals a conveyor belt operator while loading a trailer with Russet potatoes on Tuesday outside of Hermiston. 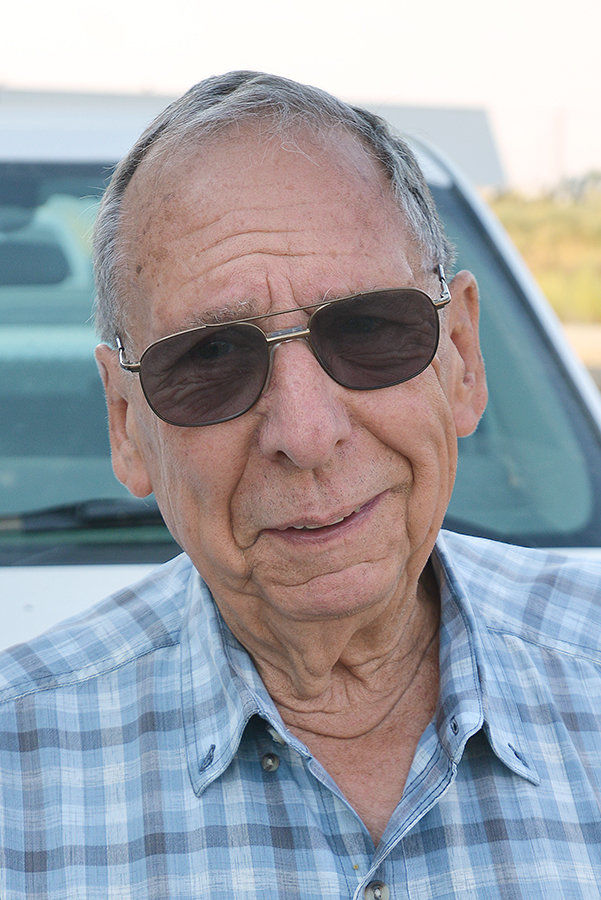 Hillary Fernandez of Stanfield releases a gate on the back of a potato truck as Estella Dueñez of Hermiston sorts Russet potatoes as they move down a conveyor belt on Tuesday outside of Hermiston.

Max Tannery of Sherwood, Oregon, signals a conveyor belt operator while loading a trailer with Russet potatoes on Tuesday outside of Hermiston.

The spring weather may not have been ideal, but Tony Amstad is still pleasantly surprised with the size and quality of his early season potatoes.

While an abundance of rain and snow pushed back planting by about a week in March, Amstad said the delay doesn’t seem to be affecting his fresh market crop. Harvest is now underway, and what he sees are spuds that are just the right shape, color and consistency for supermarket shelves.

“It’s going to be a decent year,” said Amstad, owner of Amstad Farms. “It started out bad and ended up good.”

Amstad Farms grows 2,250 acres of potatoes, mostly around Hermiston and Echo. On Tuesday, Amstad watched as crews sifted through a stream of Russets that were loaded up a conveyor belt into the back of a 30-ton semi-truck bound for the farm’s packing plant in Sherwood.

In another three weeks, Amstad said they will be going full bore on filling their eight, 9,000-ton storage sheds around the county. Most of what Amstad grows are fresh market potatoes — the kind you find in the produce section of the grocery store — though the farm also plants several varieties of red and yellow potatoes, which are sold to Reser’s Fine Foods to make potato salad.

Not only is quality looking good this year for Columbia Basin potatoes, but so is price, according to Amstad. Thanks in large part to a 15,000-acre reduction in neighboring Idaho, Amstad said the fresh market is looking to bring in about $12 per 100 pounds, which is the best he’s seen in three years.

“It’s called supply and demand,” he said. “And demand has been real good so far.”

Bill Brewer, CEO of the Oregon Potato Commission, said the fresh market has been dogged by overproduction the last couple of years. When Idaho, the largest supplier nationwide, reduces production, Brewer said Oregon is well positioned to reap the benefits.

Oregon’s potato export markets have also been on the rise over the last 10 years, Brewer added, thanks to the prosperous french fry and potato chip industries overseas in countries like Mexico, China and throughout the Pacific Rim.

“Our international markets are extremely important to us,” Brewer said, noting that 65 percent of Oregon potatoes are exported.

Domestically, about half of Oregon potatoes are sent to french fry factories like the massive Lamb Weston plants in Hermiston and Boardman. Another 20 percent are used for potato flakes and flour, like what’s made at Oregon Potato Company in Boardman. Roughly 8-10 percent go to potato chip processors like Shearer’s Foods in Hermiston.

The rest are fresh market, which makes up the bulk of taters at Amstad Farms.

Tony Amstad started the business in 1959, making this his 58th potato harvest. He has seen plenty of cycles in the industry, and has learned to take the good with the bad.

Amstad’s partners include his two sons, Jeff and Skeeter, and his nephew, Todd Dimbat. Amstad Farms is now one of the region’s larger growers of fresh market potatoes.

This year brought excellent growing weather during the months of April, May and June, Amstad said. He admits he was concerned as temperatures have climbed in recent weeks to triple digits, as such stifling heat can essentially halt the development of tubers. But with harvest beginning Aug. 5, he said yields are so far looking promising.

Brewer cautions it is still early, and said he wouldn’t be surprised if the intense heat does result in a slight dip in yields. Most growers are prepared for that, he said, and he doesn’t anticipate any quality issues related to the heat.

Meanwhile, Amstad’s crews will remain busy with harvest well into October. Barring anything unexpected, the crop should fetch a reasonable profit.

“It’s kind of a good feeling for a change,” Amstad said.