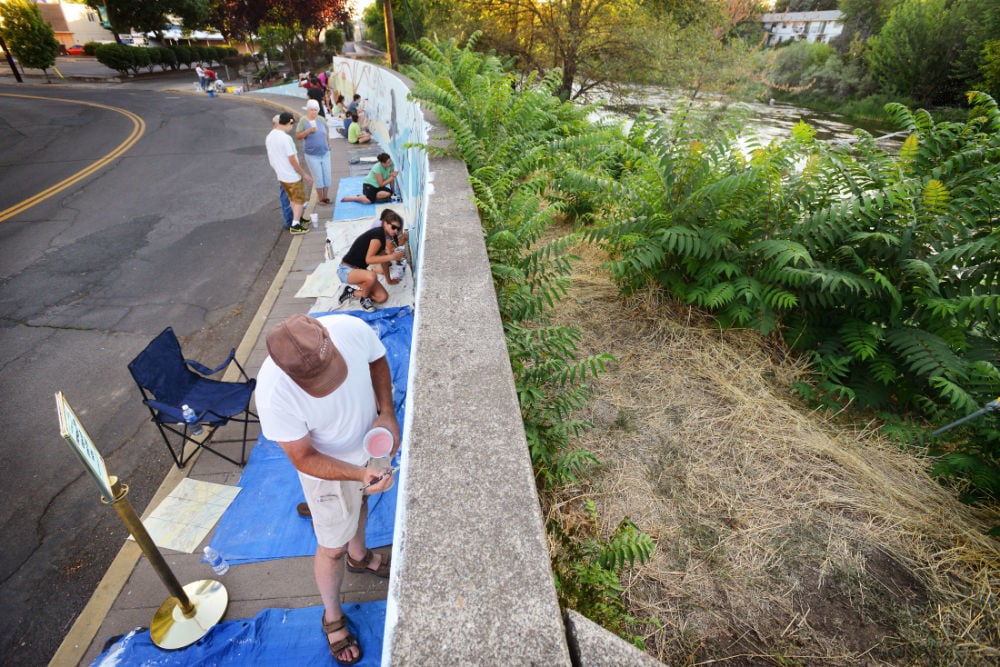 <p>More than a dozen volunteers work on a new mural on Southwest Byers on Monday evening along the river parkway in Pendleton.</p> 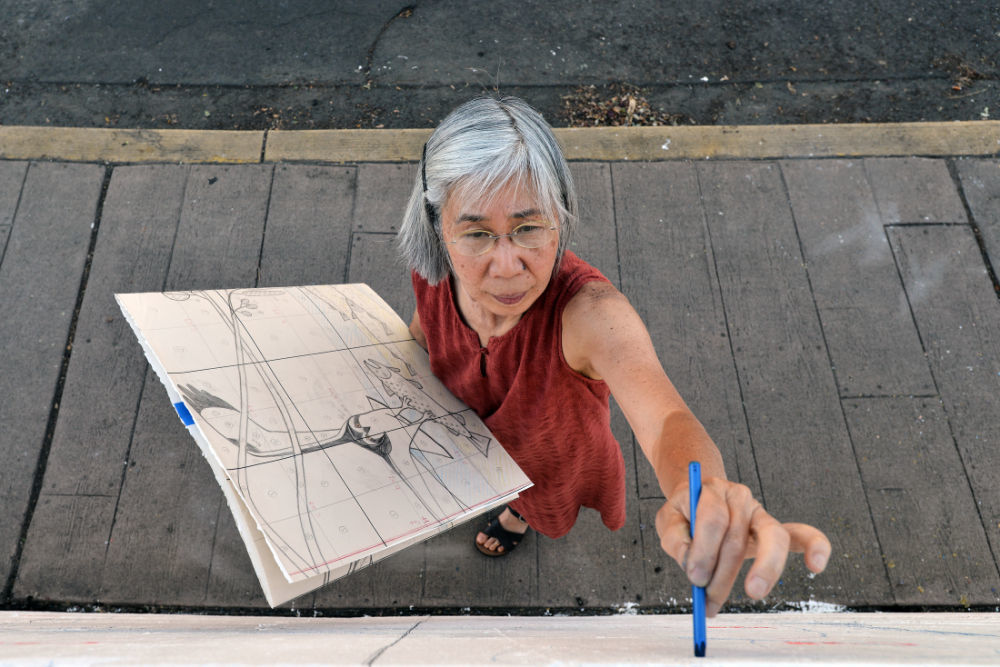 <p>Artist Hiroko Cannon draws a section of a new mural she designed on Friday in Pendleton.</p> 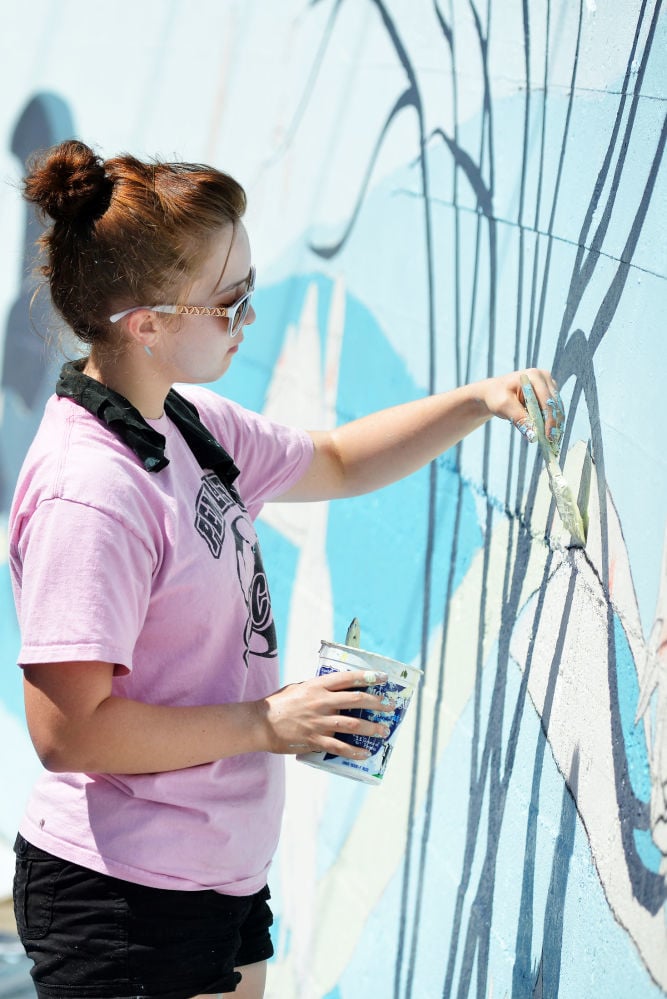 <p>Clara Robertson braves the heat to work on the new mural on Sunday in Pendleton.</p> 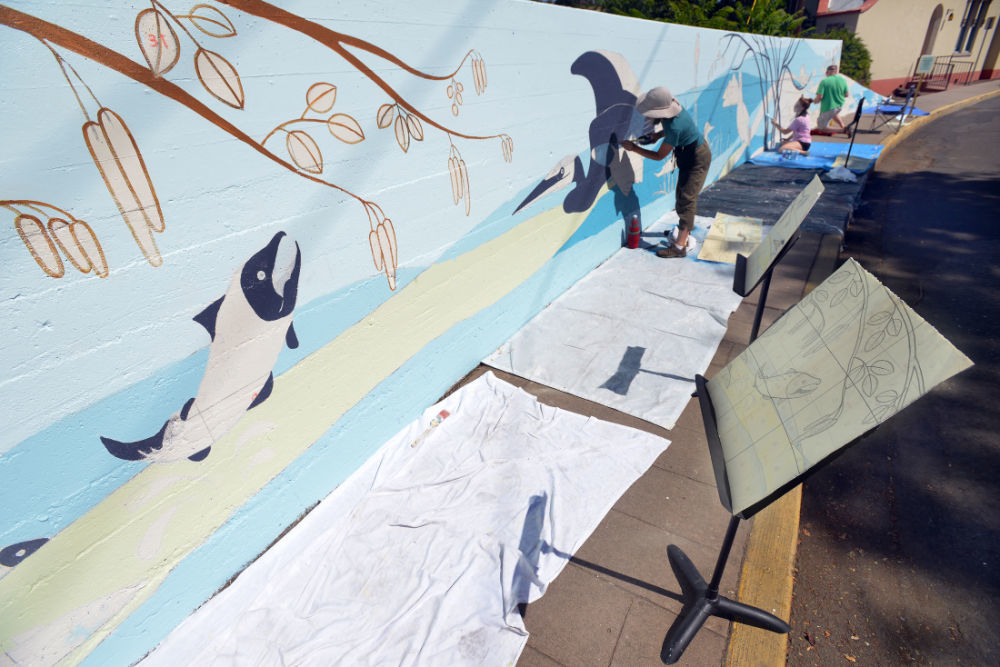 <p>Hiroko Cannon works on the blue heron at the center of a new mural Sunday in Pendleton.</p> 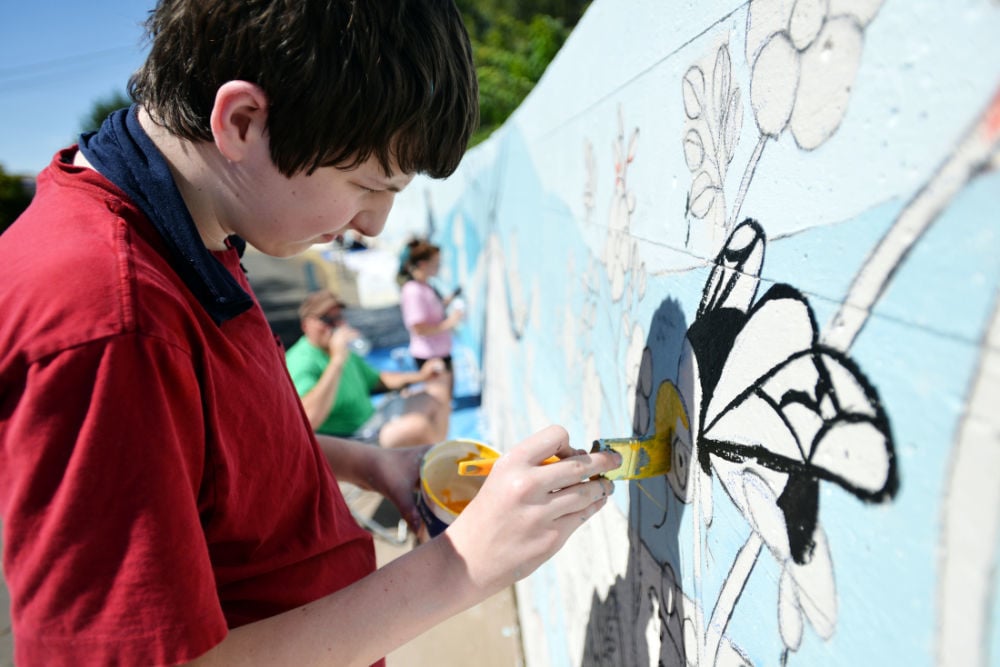 <p>Trenton Gruenhagen paints a bumble bee while volunteering on a new mural project Sunday in Pendleton.</p>

<p>More than a dozen volunteers work on a new mural on Southwest Byers on Monday evening along the river parkway in Pendleton.</p>

<p>Artist Hiroko Cannon draws a section of a new mural she designed on Friday in Pendleton.</p>

<p>Clara Robertson braves the heat to work on the new mural on Sunday in Pendleton.</p>

<p>Hiroko Cannon works on the blue heron at the center of a new mural Sunday in Pendleton.</p>

<p>Trenton Gruenhagen paints a bumble bee while volunteering on a new mural project Sunday in Pendleton.</p>

Clara Robertson, 16, blonde and bright, hunkered down Monday to paint flowers at the big end of the curved concrete wall. Two more teen girls at the opposite end painted around images of lampreys. Teens in between worked on river water, ospreys, ducks and plants.

The youth and other Pendletonians endured the dogs days of summer to create a new mural along the lone block of Southwest Byers Avenue that depicts life of the nearby Umatilla River. Its amazing that in four days this has all come together, Robertson said.

The project began as part of the Pendleton Center for the Arts Art Rocks Teens, a free arts program for area teenagers. Greggory Dallas, education and outreach coordinator for the arts center, explained the Stewards of the Umatilla River in 2002 asked the arts center to undertake the walls first mural, which also was about the rivers ecology. But the paint faded with time, the undercoating showed through in places.

Then retired scientist Betty Klepper of Pendleton came forward with a donation for a new mural, Dallas said, and Pendleton residents Mike and Jill Thorne donated funds for a sealant to protect the painting. With that, the arts center recruited volunteers to transform the 80-foot wall that slopes up from the sidewalk to peak at about 6 feet. Dallas said this is one of the largest murals the center undertook in recent years.

Pendleton Boy Scout Troop 700 and others put in the grunt work to scrape off the old paint and cover the concrete surface in 10 gallons of latex primer and base coat. The mural itself took about 10 to 12 gallons of house paint. And the design came from Pendleton artist Hiroko Cannon, who painted the meticulous Great Blue Heron in 2007 for the arts center.

Unlike the minute details of that work, Cannon said she aimed for more generalized images for the mural. Still, she said, she spent hours studying animals that live in and around the river to show the reality of where and how they live.

Cannon, though, said she could not be totally realistic. The murals big osprey in flight, for example, grips a salmon in a perpendicular fashion. The raptors really hold fish parallel to their body, Cannon said, but then the salmon would be hard for an onlooker to identify.

She drew the design to scale on paper and plotted a grid to make it easier to recreate on the wall. Several area artists, Dallas said, helped recreate the drawings in-large.

Cannon also made the mural a paint-by-numbers project, so volunteers could know just what color to use where.

Robertson, who will be a junior in high school, said she had long wanted to do something for the community, but she usually worked summers. This year she earned a Pendleton Rotary scholarship to study in Japan and leaves in August. Instead of a job, she said, she used her free time to paint a lot.

Knowing you did this, she said, you painted it, you helped it  thats a great feeling, knowing you helped your community.

And the bright colors, the images of life, Robertson said, made her happy, and she was sure it would make others happy as well.

Charlie Herrington is not one of the youth volunteers, but at 61 he is youthful. He engaged with Robertson and other teens about superior music videos of the 80s and 90s. He and his wife, Diana, moved from Portland to Pendleton four years ago for a slower pace of life. Right off, they became members of the arts center, he said, and that drew them into the Pendleton community and this latest project.

While much of the painting took a wide brush, Herrington said the flowers, twigs, stalks and such required some precision, and those details are not apparent at first glance.

About the only downside was the heat. After a slew of 100-plus days earlier in July, temperatures spiked again starting a week ago and surpassed 100 on Monday and Tuesday, according to the National Weather Service. The temps were about 10 more than the norm, and the heat came on just as volunteers were reaching the project finish line.

Hiroko and the project workers often came in the morning or late afternoon, but it still was hot. The high temperatures and low humidity helped to dry the paint fast  on the wall but also in buckets and brushes. Dallas said she might reconsider doing another mural in July.

The big stuff wrapped up with the end of Mondays effort, but Cannon said she needs to add outlines and touch-ups. That means coming back morning after morning, she said, through about mid-August. And she said she wants to add the names of the donors and volunteers who contributed to the mural.

The old mural also has a life in the digital realm. Professional photographer E.J. Harris, who works for the East Oregonian, photographed the aging mural and work for the arts center. Dallas said those images soon will be available online at http://www.pendletonarts.org/ .

Hiroko said the mural gives a brightness to Pendleton, and she hopes it works to encourage younger people to get involved with art. She and others also spoke of how the mural touches a place in people.

Folks walking or driving by slowed to admire or gawk at the work, and some asked questions. Herrington said locals seemed more likely to recall their own experiences watching and encountering wildlife on the river.

The memories, the people, and listening to the kids has been fun, he said. It gives you a sense of being part of something.

Bash presses Birx: 'Why did this happen?'