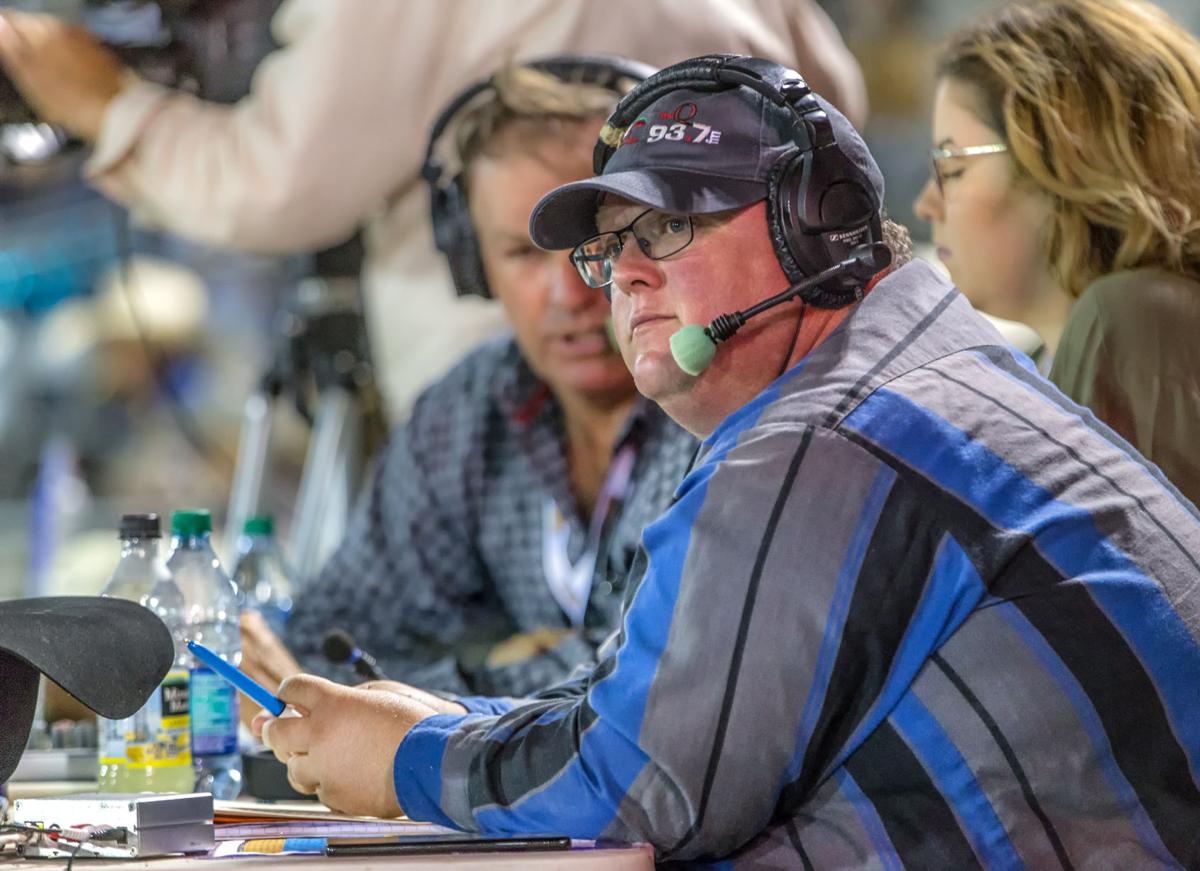 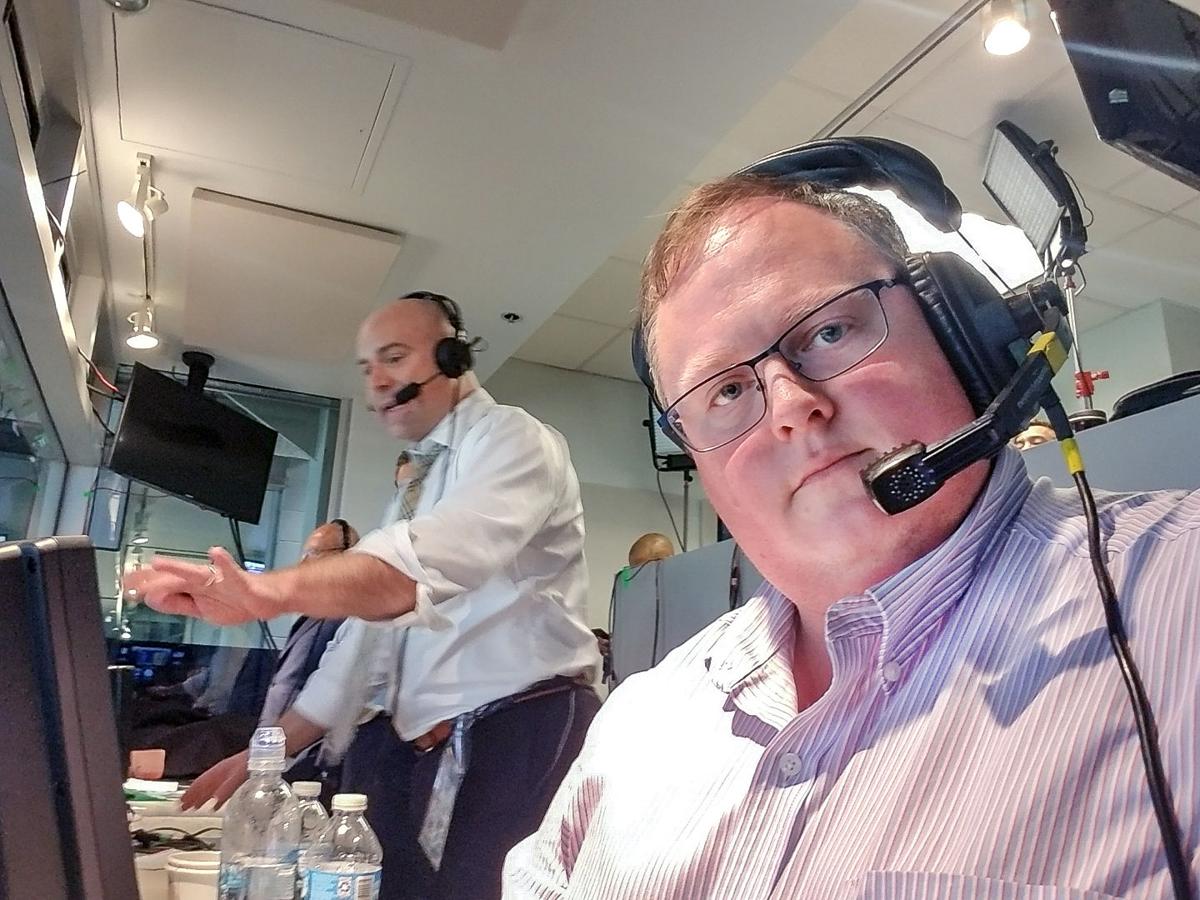 Erick Olson takes a moment for a selfie in the booth as he assists FOX Sports broadcaster John Strong during a MLS game with statistics and research. 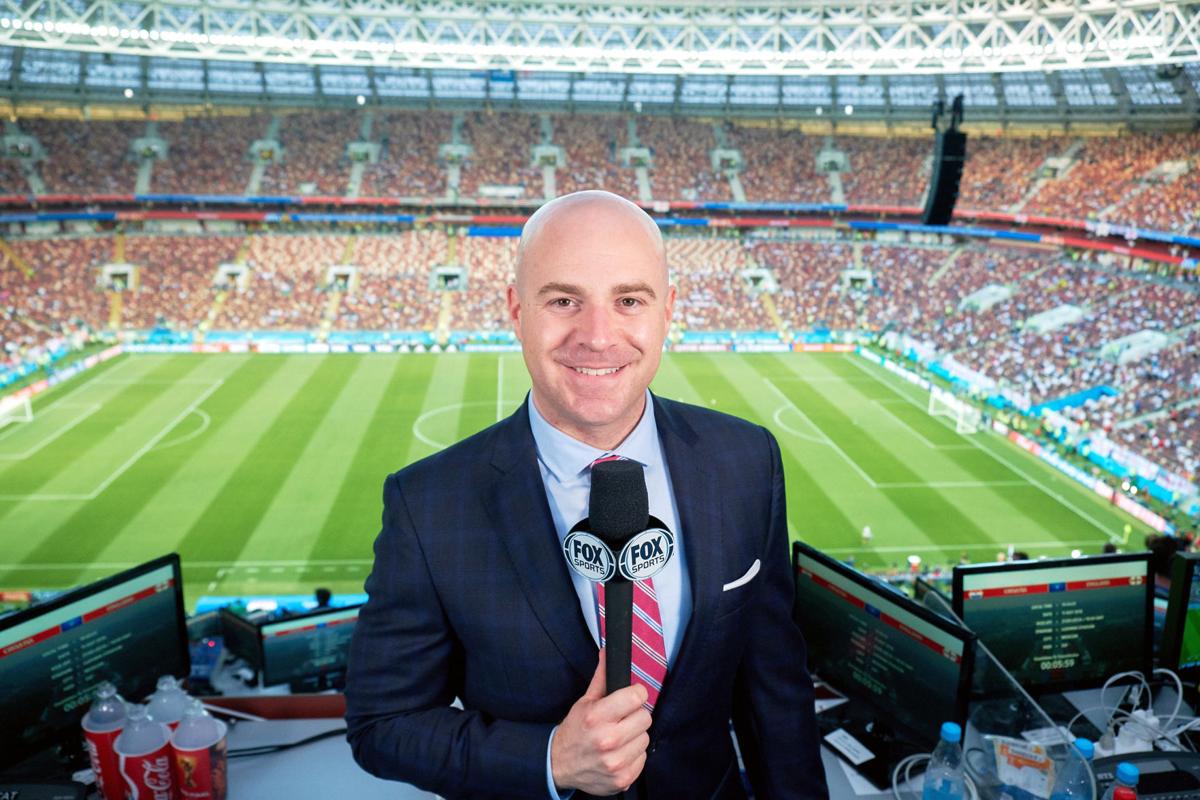 Erick Olson takes a moment for a selfie in the booth as he assists FOX Sports broadcaster John Strong during a MLS game with statistics and research.

During the men’s FIFA World Cup final last summer in Russia, Strong broadcast to millions of soccer fans as Olson fed him stats and other research using a white board, hand signals and quick exchanges with Strong’s microphone muted. The boyhood buddies have mind-reading capability that developed over years of friendship. Strong draws comfort from Olson’s presence in the booth.

“It’s having a second brain, a second set of eyes, a second version of me sitting there next to me,” Strong said.

Olson parachutes into the weird world of international soccer broadcasting for a few weeks every summer. The rest of the year, he teaches language arts and communication at Umatilla High School, coaches UHS softball and does news and sports commentary for KOHU KQFM radio and the Oregon Student Athletic Association. Olson, the Voice of the Bulldogs, has his nickname — “Windbag” — inscribed on a special chair at Hermiston High School’s Kennison Field.

This summer, Olson again joined Strong’s team to cover the CONCACAF Gold Cup, which determines the men’s champion of North America, Central America and the Caribbean.

The two men, both 34, grew up in Lake Oswego. They played middle school basketball on the same team. In high school, they started Laker Broadcasting at Lake Oswego High School, broadcasting football and basketball games. They enrolled in University of Oregon’s School of Journalism and Communications with Strong studying electronic media and Olson headed toward a career in print journalism, preferably with the San Francisco Chronicle.

“My dream was to be the beat writer for the San Francisco Giants,” Olson said.

Strong, however, pressed him to do various broadcasting gigs with him and Olson good-naturedly helped him out. Normally, Strong did play-by-play and Olson provided color. As sophomores and juniors, they announced the University of Oregon softball games for the campus radio station. For that job, Olson was asked for a demo.

“I downloaded a 1989 San Francisco Giants/Chicago Cubs game from the computer,” Olson recalled. “I muted it and did the play-by-play. My first baseball demo is a game from when I was 4 years old.”

They interviewed athletes during a weekly half-hour show called “Quack Smack” and did various live-streaming UO sports broadcasts. The OSAA hired them to announce a state soccer championship and other games. For Olson, it was all something of a lark.

Olson did some solo work, however. He was the public address voice at UO women’s volleyball games and news director at the campus radio station. By his senior year, he wholly embraced the idea of a career in broadcasting. After graduation, he accepted a job with sister radio stations KOHU and KQFM in Hermiston to broadcast sports and news. He caught some attention with his smooth and story-telling style. In 2013, Olson was named Oregon Association of Broadcasters Radio Sports Announcer of the Year.

Strong got on an even faster track. He was the first radio and television voice for the Portland Timbers and he later worked for both NBC and FOX. Olson watched his friend rise with awe.

“By his mid-20s, he was a national television broadcaster,” Olson said. “It was a really fast trajectory.”

Olson’s first foray into the world of national broadcasting came in 2015 when Strong reached out to Olson to ask if he would be his statistics and research assistant for three weeks of women’s World Cup games in Canada that summer.

“My reaction was ‘Yes,’ now how do I make it happen?” Olson said.

The radio station gave Olson the green light, though he continued to do news segments from hotel rooms and airports. In between soccer games, Olson researched players and teams and assembled notes for the World Cup games. In the booth, he supplied stats and interesting tidbits for Strong to use in his play-by-play.

“I had a dry erase board about the size of a piece of paper,” he said. “I wrote notes or used hand signals to pass along statistics and updates as the games progressed.”

When he learned of an impending substitution, he alerted a Los Angeles producer, so graphics could be prepared.

Last summer brought men’s World Cup action in Russia. The FOX team included Olson, Strong, Strong’s broadcast partner Stu Holden, producer Shaw Brown and two Russian security guards. The broadcasters announced 16 of 64 games, including the final match between France and Croatia in Moscow’s Luzhniki Stadium. Between games, the team found food, flew to another city, tried to sleep on the plane and started all over again.

The string of games and constant travel was challenging — even more than the 2007 Oregon state 1A basketball tourney in Baker in which Olson announced 20 games in four days despite having strep throat.

“Three of the matches we called at the World Cup, we had not slept at all the night before,” Strong said. “It was a 24-hour adrenaline high. After each game, you recalibrate and pack your bag. You just go.”

Olson noted that the older airplanes in which they flew didn’t inspire trust.

“Each time you land, everyone claps,” he said.

“When I have Erick on my left, Stu on my right and Shaw in my ear, I’m fearless,” Strong said.

He called Olson his “information sherpa” who has broadcasting experience of his own.

“Erick knows me so well, he anticipates what I want and need to know,” Strong said. “It becomes a symbiosis thing.”

An added bonus for Olson is an Emmy Award FOX Sports received for its 2018 World Cup coverage in the Outstanding Trans-Media Sports Coverage category. He is listed with some 70 other people, but it gives him a thrill all the same.

Olson said he is enjoying the ride, just like he did with Strong back in the day when he was “hanging out with John.”

Michael Holding: 'People need to understand about the dehumanisation of the Black race'

Hear Roger Stone talk about his call with Trump