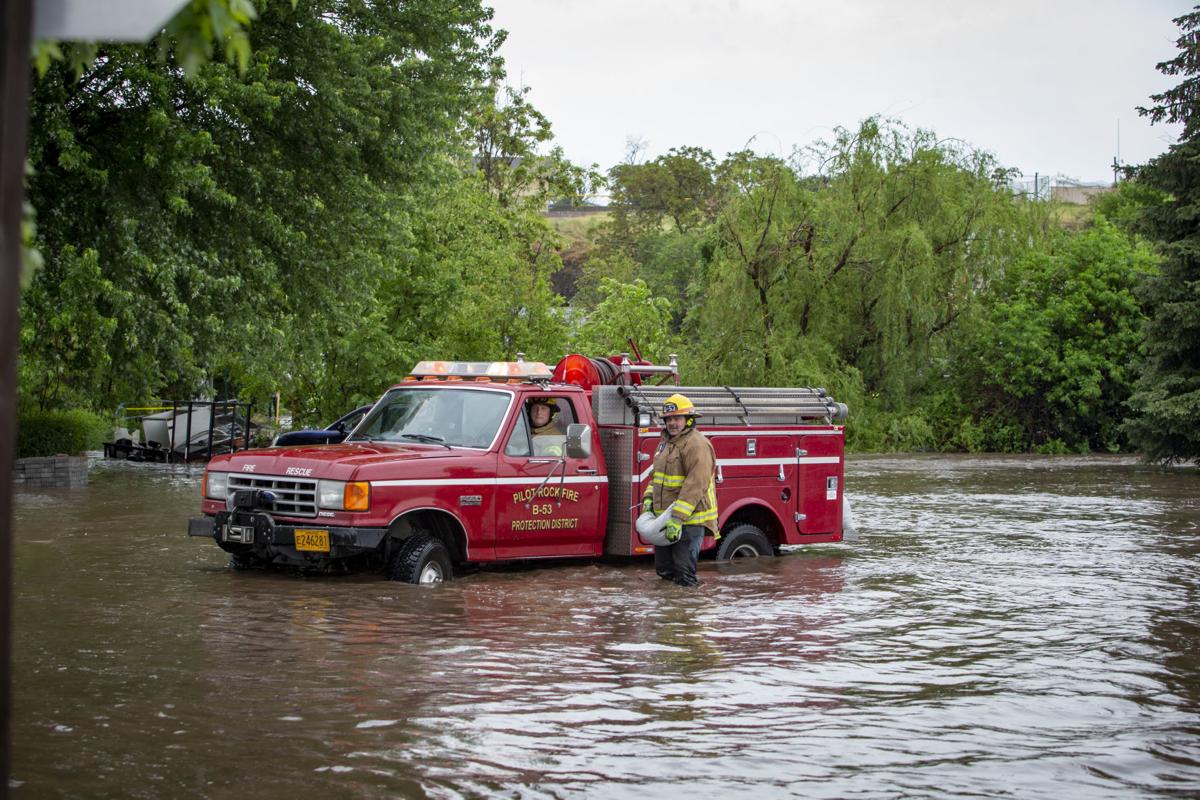 Crews from Pilot Rock Fire Protection District carry sandbags through the rising floodwaters from Birch Creek in downtown Pilot Rock on May 20, 2020. 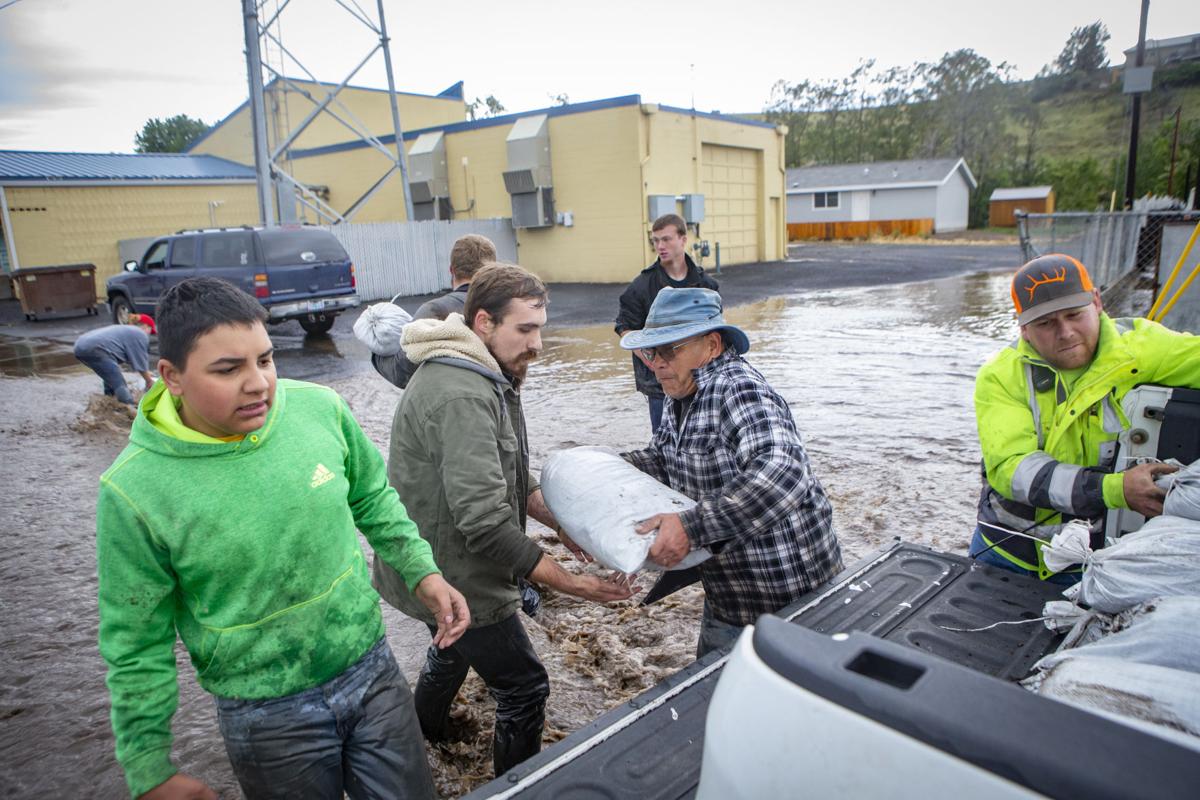 Sunny Bernabe, center right, helps to distribute sandbags to fellow volunteers along Highway 395 in Pilot Rock on May 20, 2020.

Crews from Pilot Rock Fire Protection District carry sandbags through the rising floodwaters from Birch Creek in downtown Pilot Rock on May 20, 2020.

Sunny Bernabe, center right, helps to distribute sandbags to fellow volunteers along Highway 395 in Pilot Rock on May 20, 2020.

PILOT ROCK — Six candidates are running for positions on the board of the Birch Creek Water Control District this year in response to flooding around Pilot Rock in recent years.

“This is the first year that we’ve actually had very much interest because of the floods we’ve had just recently,” said Charles Hemphill, a longtime board member and resident.

The board utilizes a tax base to help with residents’ requests for repairing the waterways near Pilot Rock that have been damaged by flooding and prevent floodwaters from causing further damage. Residents living along East and West Birch Creek roads are eligible to apply for funds from the district.

Water districts are also meant to improve agriculture, public health, welfare and safety of communities, according to state law. The districts also can acquire, construct and operate facilities to improve the use of local water resources for both communities and local wildlife.

The board meets on an “as-needed basis,” which sometimes means only every few months, according to Hemphill. The board also puts out an annual budget for the county.

Since 1999, the community has only had a couple of major floods, Hemphill said, but “this one last May was the worst one that caused trouble in Pilot Rock.”

The six people running for positions suggest an interest not seen in recent years, and according to at least three of the candidates, that’s because of the increased flooding.

“I think it’s good that there’s interest in it — that somebody is wanting to do something, to do something to improve it,” said Andy Munsey, a retired forester who is running for Position 2 on the board. “That’s certainly a benefit.”

Munsey, who worked for nearly 50 years in the local timber industry and still does timber consulting, said the flooding played a role in his decision to run for a position on the board.

He said he sees ways that the timber industry can help mitigate flooding by providing trees for restoration and helping with streamside stabilization. He also said he would propose planting vegetation to hold soil in the ground and slow runoff and erosion.

“I think it’s important because then you’re going to control the erosion and control the flooding,” he said. “We don’t need further eroding in the streams.”

Living near McKay Reservoir, Munsey said he had noticed some of the new developments made around Birch Creek and Pilot Rock, including waste treatment and pump systems for the city, and decided he wanted to do his part for the community as well.

Mary Weinke, a Pilot Rock resident and board member who worked in the school district for many years, said she’s glad there’s more interest in the board positions this year.

“I just think, if you’re going to help out in the community, you kind of need to help out on some things,” she said. “So many times you see that nobody’s running when you vote. But I think this year, there seems to be a lot of people running for open positions. That’s what makes a community work. People serving and helping out with other people’s needs.”

Weinke said she ran for the position on the board because it appeared to her that the board wasn’t filling positions or levying taxes.

“I saw that and decided to run and fill in a board position, because my husband’s brother had been a founding (board member) way back in the 1970s,” she said.

She said in recent years, however, local residents like herself have gotten good reimbursements from the floods, and she wants that to continue to happen.

“You have to follow certain state rules to meet and levy and file for tax stuff,” she said. “And when you collect the money, then you’re supposed to disseminate it under whatever rules you’ve set up that make you eligible to receive it. I think we went for a while without any problems, but then I think it just got a little lax.”

A retired farmer and Vietnam veteran who grew up in Pilot Rock, Hemphill was the chairman of the board for several years in the 1980s and 1990s. He also served with the Umatilla County Soil and Water Conservation District for over 30 years until he resigned in 2010.

Hemphill said there are several places along Birch Creek that have become problematic during times of high waters in recent years. One point, which he called the “miracle mile” due to its unpredictable nature during flooding, is located just south of Pilot Rock on East Birch Creek above Pilot Rock Elementary School.

Hemphill said farmers in the region have been hit especially hard by the floods. He said community members should be given the responsibility for taking care of the waterways.

“The people who manage it should be the ones who live by it,” he said. “Because it’s those people whose lives it affects.”

According to candidate filings, running for the position against Munsey is Cliff Hoeft, a longtime board member, farmer and pilot. Running against Hemphill is John Johnson, a Pendleton resident and retired owner of fast food and pizza establishments in Hermiston. And running against Weinke is Jim Hatley, a self-employed construction worker from Pilot Rock.

Hoeft, Hatley and Johnson did not respond to multiple calls requesting an interview.

Birch Creek is essential for the vitality of the Umatilla River Basin, supplying a large percentage of its wild steelhead trout, according to Hemphill, who has served on the board since the late 1970s.