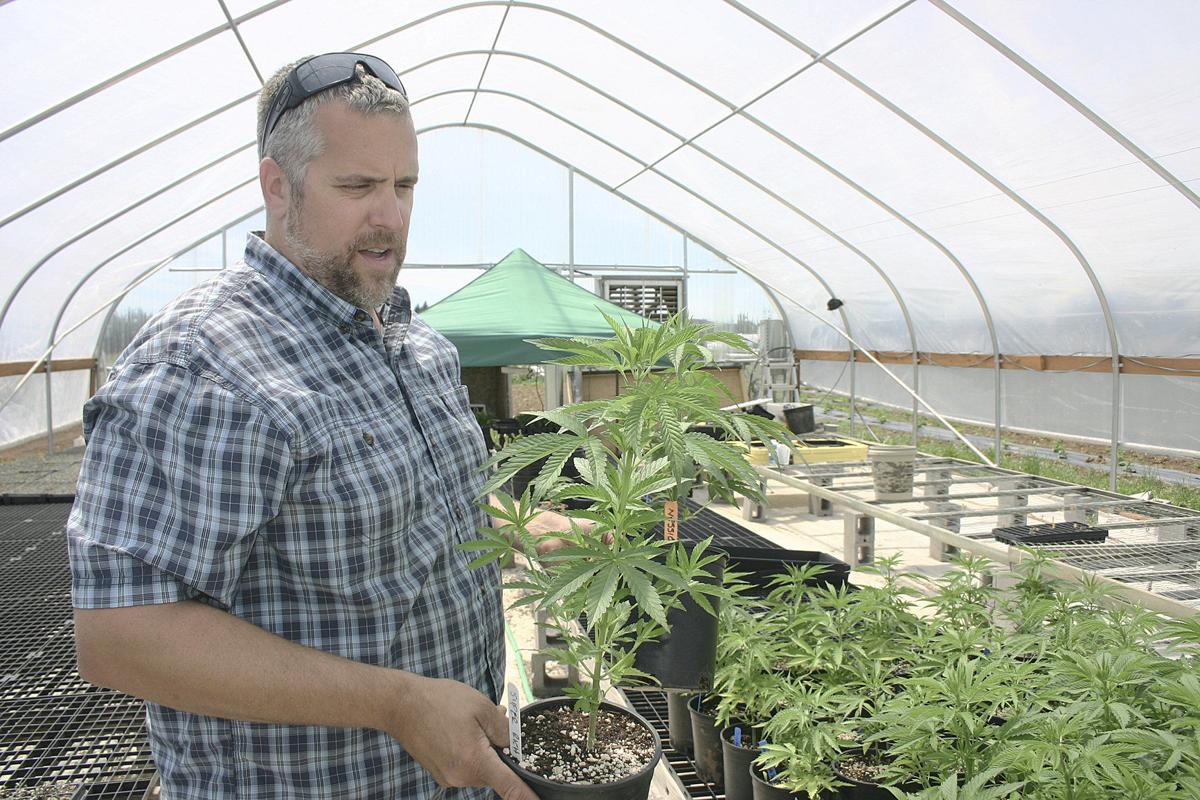 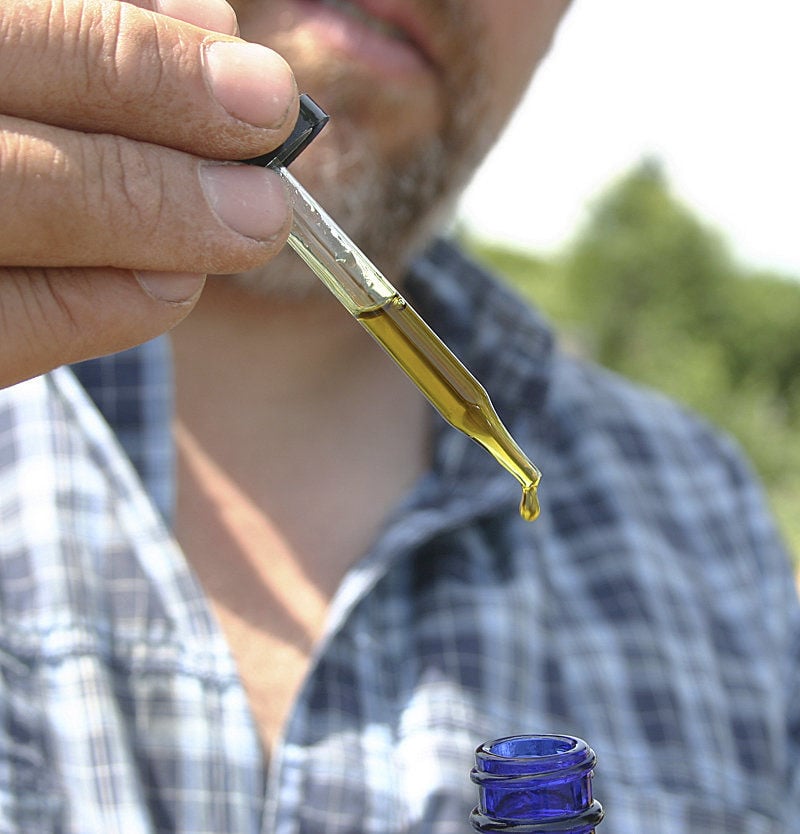 Cannabinoid, or CBD, oil is one of the main products driving interest in growing hemp in Oregon and Washington. Hemp can also be used in different food products, fiber and building materials. 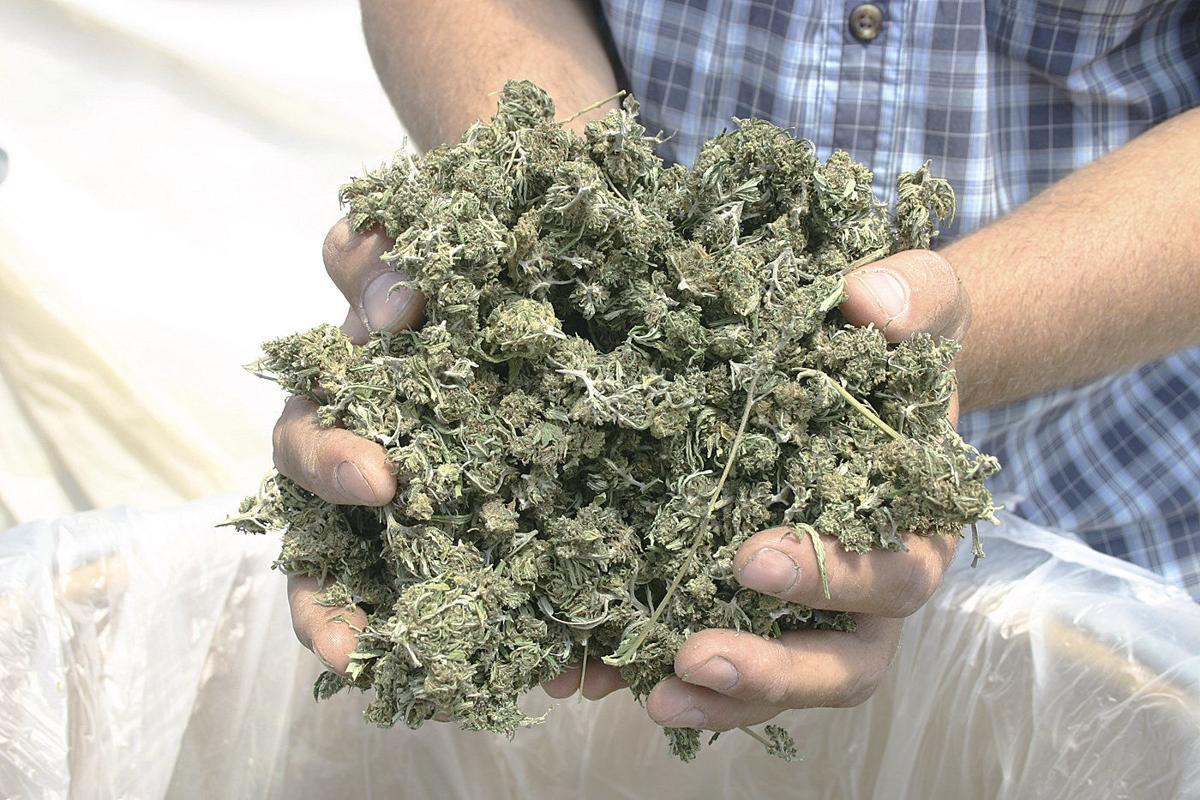 Hemp flowers resemble marijuana, but with an average concentration of tetrahydrocannabinol, or THC, of 0.3 percent or less. 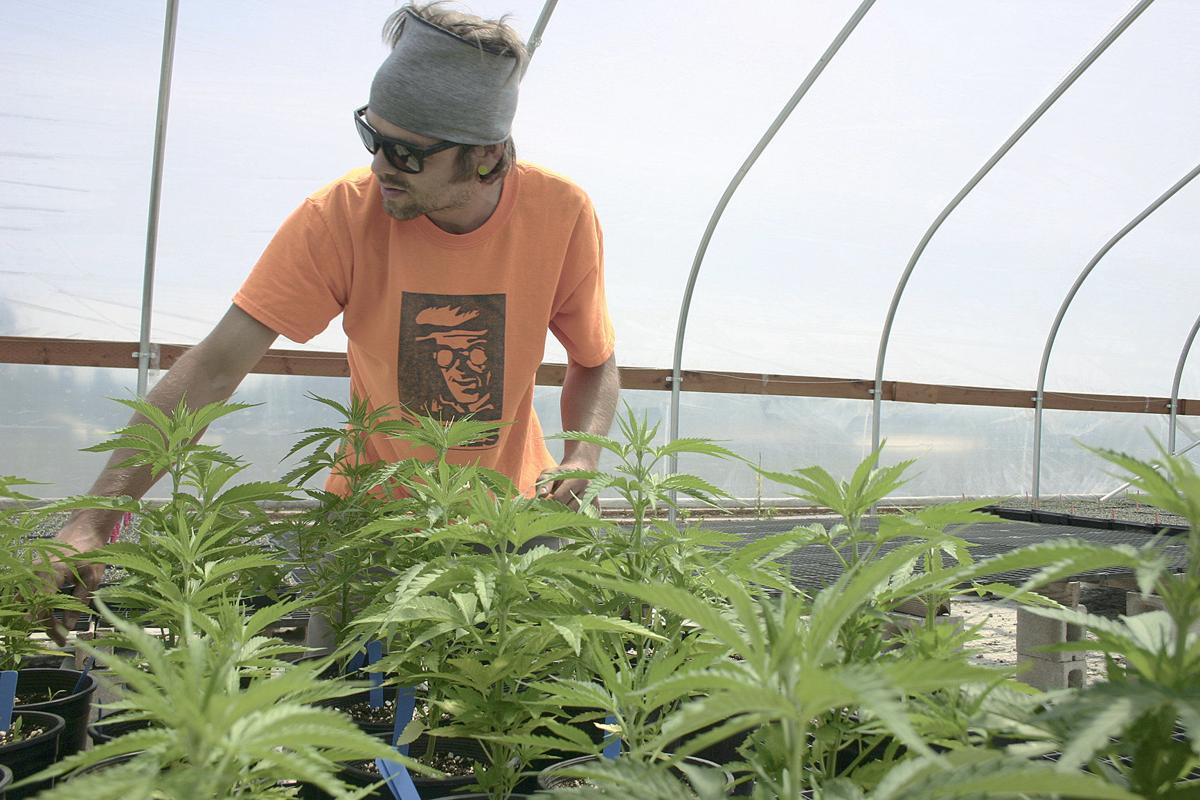 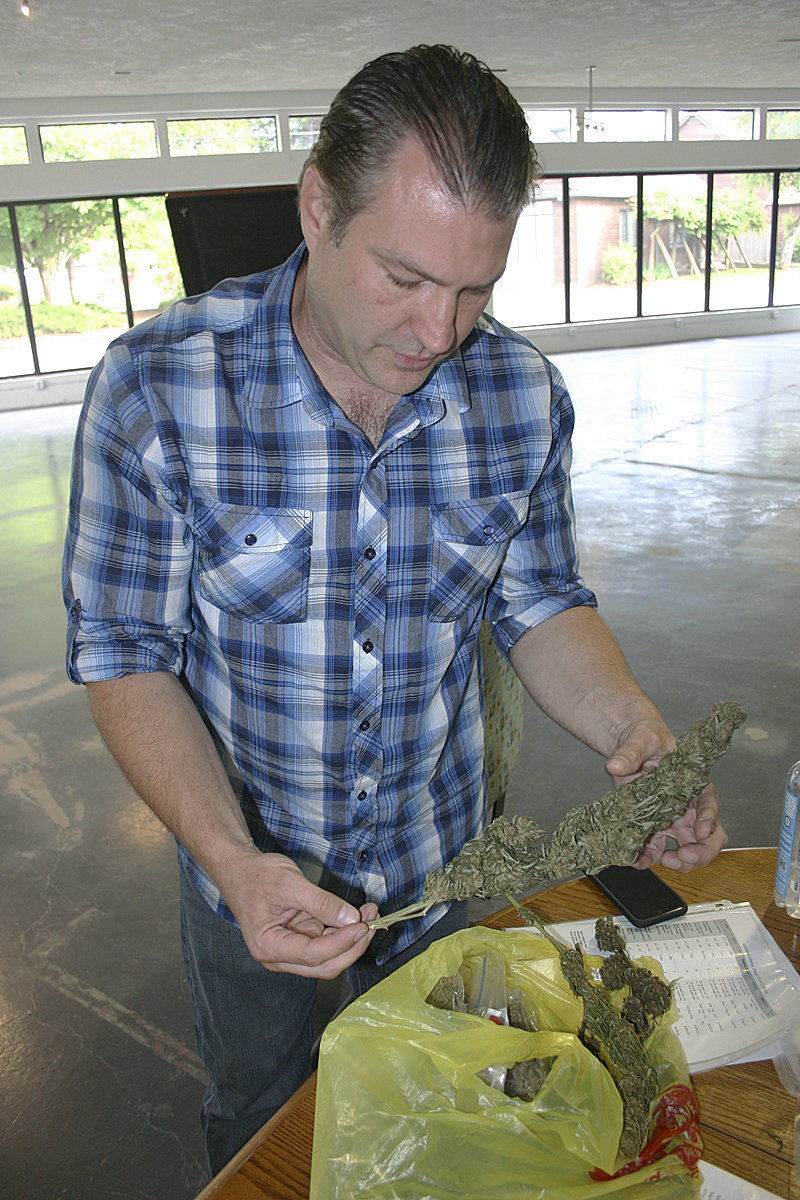 Anthony Rushford, a hemp seed geneticist for Northwest Hemp Commodities, said he has developed more than 200 hemp strains, including plants that can be harvested by machine. 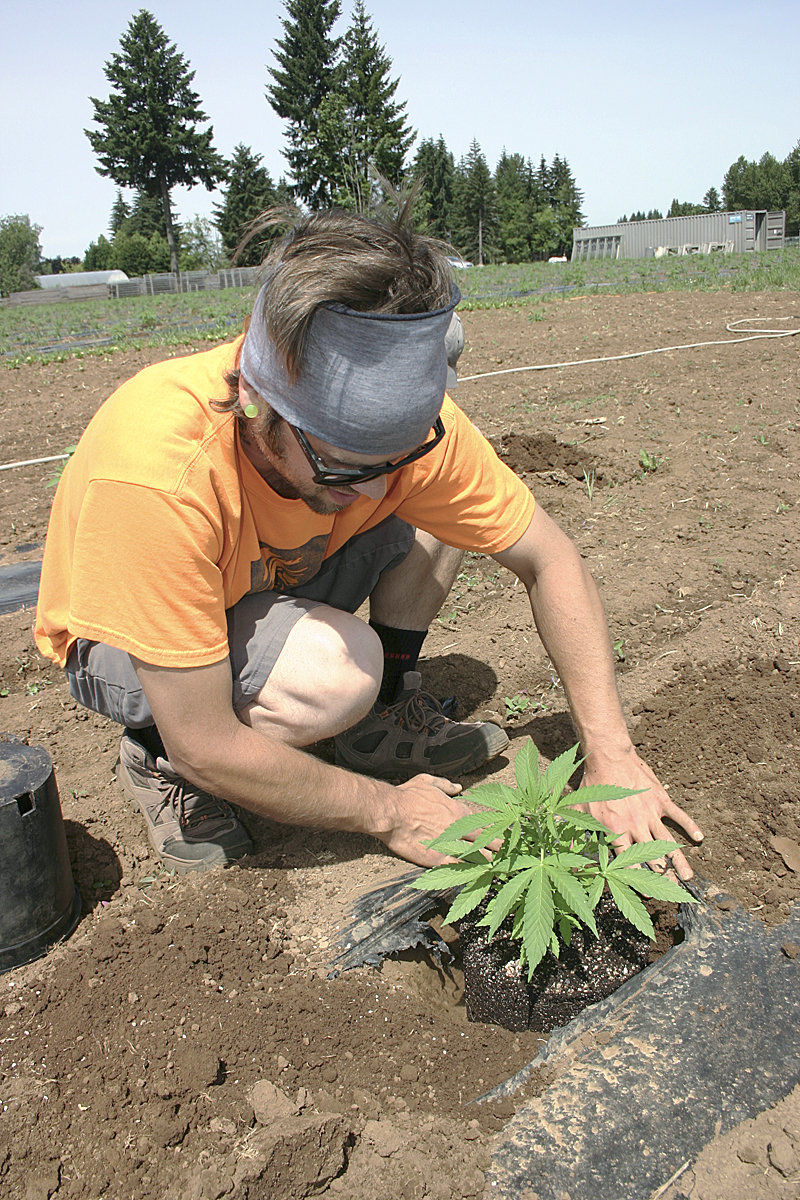 Dustin Ash transplants a hemp plant from the greenhouse to the field June 12 at Oregon Fusion's research farm. 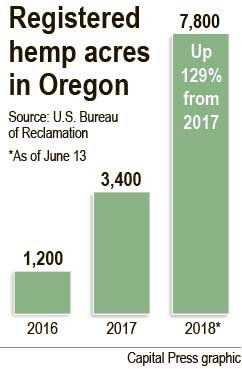 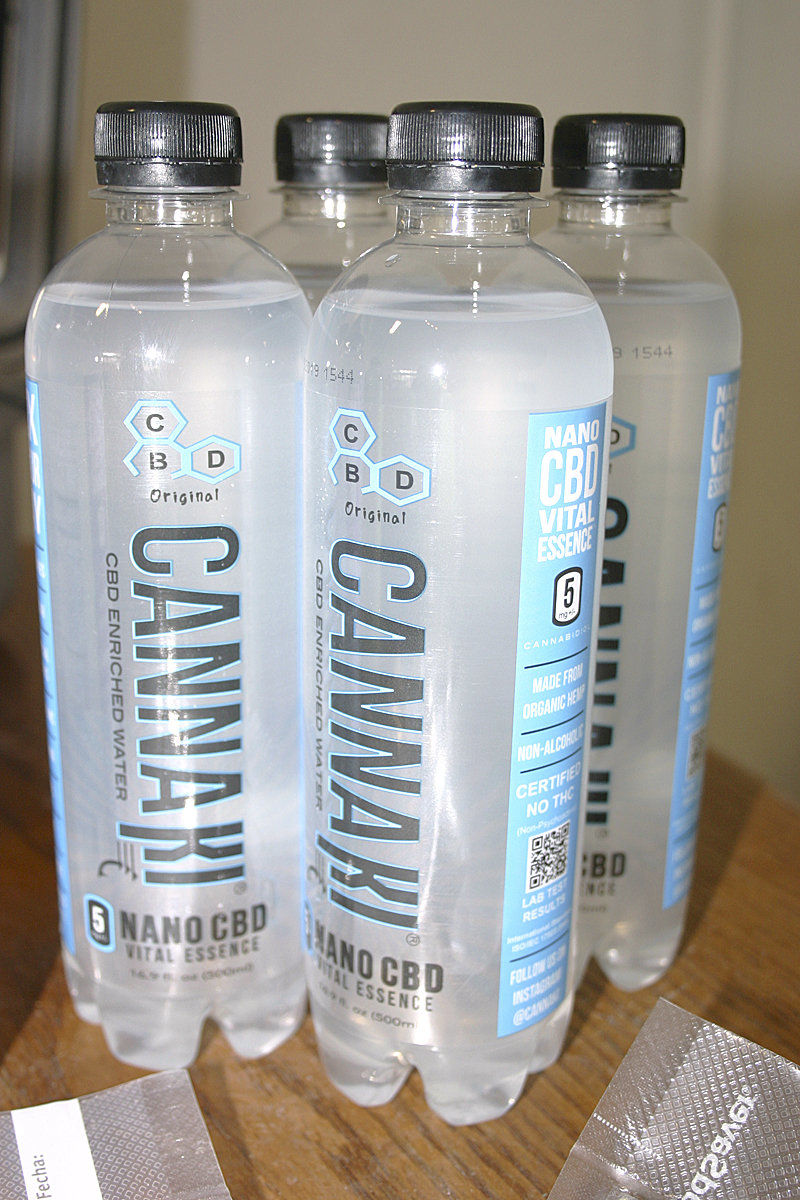 Northwest Hemp Commodities, which formed in February, plans to open a storefront in Salem, Ore., selling products including its own line of flavored CBD-enriched water.

Cannabinoid, or CBD, oil is one of the main products driving interest in growing hemp in Oregon and Washington. Hemp can also be used in different food products, fiber and building materials.

Hemp flowers resemble marijuana, but with an average concentration of tetrahydrocannabinol, or THC, of 0.3 percent or less.

Anthony Rushford, a hemp seed geneticist for Northwest Hemp Commodities, said he has developed more than 200 hemp strains, including plants that can be harvested by machine.

Dustin Ash transplants a hemp plant from the greenhouse to the field June 12 at Oregon Fusion's research farm.

Northwest Hemp Commodities, which formed in February, plans to open a storefront in Salem, Ore., selling products including its own line of flavored CBD-enriched water.

Planting season for industrial hemp is well underway at a 3-acre farm near Boring, where Adam Kurtz is testing new seed varieties to ensure they meet regulatory guidelines.

Kurtz is entering his third season growing hemp to make products derived from cannabinoid, a chemical compound found in cannabis that reportedly offers health and nutrition benefits ranging from pain relief to reducing anxiety and depression. He began his company, Oregon Fusion, in 2016 with business partner Ed McCauley.

“Here we do a lot of different trials,” said Kurtz, kneeling to inspect one particular strain of hemp named Sour Space Candy. “We’re testing genetics a year in advance so we can offer them to our partner farms.”

Hemp growers such as Kurtz are optimistic about the future of the industry, especially after the U.S. Senate Agriculture Committee last week included the Hemp Farming Act in its latest markup of the 2018 Farm Bill. Sponsored by Senate Majority Leader Mitch McConnell, R-Ky., the provision defines hemp as an agricultural commodity and removes it from the list of federally controlled substances.

A full Senate vote on the Farm Bill could come as early as July 4.

If the House goes along with the Senate, the Farm Bill would provide clarity on hemp’s legality at the federal level. Under the legislation, states would become the primary regulators of hemp production. Hemp farmers could also become eligible to apply for crop insurance, and researchers studying hemp could apply for competitive grants through the USDA.

For 25 years, Kurtz lived and worked in upstate New York as a fresh-cut flower farmer. He relocated to Oregon and founded Oregon Fusion to get a foot in the door of the upstart hemp industry.

Hemp has the potential to be a “major disruptor” in several facets of the U.S. agricultural economy, Kurtz believes.

“We are at its infancy in potential,” he said.

Though hemp and marijuana are both cannabis plants, hemp contains no more than 0.3 percent tetrahydrocannabinol, or THC, the psychoactive component in pot that gets users high. Industrial hemp can be used in several food and health products, fiber, paper, plastic, cosmetics and building materials such as a mixture of hemp biomass and lime known as “hempcrete.”

Oregon Fusion grows hemp specifically for cannabinoid extract — known as CBD — that goes into mints and cigarettes, called cones. Kurtz said he believes consumer demand for the products is only going to increase, and Oregon is already blazing the trail for testing and quality standards.

“It’s like a rocket ship,” he said. “This thing is just exploding.”

McConnell, who also serves on the Senate Agriculture Committee, introduced the Hemp Farming Act of 2018 in April, garnering bipartisan support from more than 25 senators, including Oregon Democrats Ron Wyden and Jeff Merkley.

On June 13, the committee passed the 2018 Farm Bill, which includes language from the Hemp Farming Act. In a statement, Wyden said hemp has proven itself as a “job-creating growth industry with far-reaching economic potential.”

“It’s just common sense that farmers in Oregon and across our country should be allowed to cultivate this cash crop,” Wyden said.

Courtney Moran, a Portland attorney and president of the Oregon Industrial Hemp Farmers Association, worked closely with the senators for more than a year crafting the bill’s language to clarify what she described as “gray areas” in federal law.

Moran said the bill more clearly defines hemp to include any part of the plant — including all seeds, derivatives, extracts, cannabinoids, isomers and salts.

Joy Beckerman, a lobbyist and consultant with Hemp Ace International and president of the Hemp Industries Association, said the bill provides much-needed clarity on hemp’s legal status, opening the door to investors and interstate commerce that will allow the industry to flourish.

Beckerman, who was a key figure in drafting rules for Washington state’s hemp program before she moved to New York, said CBD extract is driving the industry for now, though additional investment could help pay for infrastructure to tap into what she calls the “trillion-dollar industries,” namely paper, fiber and construction.

While there is no official estimate for U.S. hemp sales, the Hemp Industries Association reports that retail sales for hemp products totaled nearly $600 million in 2015.

“This bill is going to catapult the hemp industry in the U.S.,” Beckerman said.

According to the National Conference of State Legislatures, at least 35 states have already passed industrial hemp statutes.

House Bill 4060 established rules for Oregon’s Industrial Hemp Program in 2016. By the end of the year, the state had 70 registered hemp growers, 53 handlers and a little more than 1,200 total acres.

Since then, the program has seen a sharp increase in year-to-year registration. In 2017, the numbers swelled to 233 growers, 176 handlers and 3,400 acres. The same year, the Legislature passed Senate Bill 1015, allowing licensed processors to make CBD extracts.

ODA not only handles registration of growers and handlers, but oversees testing of the product to ensure it does not exceed the 0.3 percent THC threshold. This year, McAninch said the program will also allow private accredited labs to conduct testing.

“We got very busy last year doing that, and we got stretched pretty thin because we had limited staff,” he said.

Meanwhile, the industrial hemp pilot program in Washington state has been slower to gain traction.

Hector Castro, spokesman for the Washington State Department of Agriculture, said the pilot was created in 2016 with a one-time appropriation of $145,000. During the first year, 2017, it registered just four growers, one seed distributor, one processor and one combined grower-processor, raising $8,000 from those seven licenses.

The hemp pilot was suspended during the winter heading into its second year before lawmakers came up with $100,000 to save it. Castro said just one license holder, the Confederated Tribes of the Colville Reservation, has applied for renewal on 120 acres.

“We would need to be in a position where the industry fees could support the program,” Castro said.

Other western states are farther behind the hemp bandwagon.

The state of Idaho does not currently allow the cultivation of industrial hemp. The California Industrial Hemp Farming Act took effect on Jan. 1, 2017, though registration is not yet available, according to the state Department of Food and Agriculture.

Bonny Jo Peterson, a lobbyist for the Industrial Hemp Association of Washington, is undeterred by the lackluster start to that state’s hemp pilot. She said there is “a lot of excitement, as well as interest from farmers.”

If new regulations come out of the Farm Bill, Peterson said she believes there may be as many as 100 licensed growers in Washington by next year.

“There’s a lot of large farmers that are just waiting for it to be viable at the federal level for crop insurance,” Peterson said.

Peterson also said she plans to start growing hemp next year at a farm outside Sequim, Wash., on the Olympic Peninsula.

“My interest is in building materials and paper,” Peterson said. “I see the viability in food, plastics, biofuel and getting rid of fossil fuels. Those are the things that get me excited, and getting farmers back in control of their crops.”

Profits will increase with the development of higher-value markets, Kurtz said.

“We look forward to a more expansive market of products that Oregon farmers grow well, and can see an economic benefit not only to farmers in Oregon, but the state as a whole.”

Rick Walsh, a farmer near Klamath Falls, is planting roughly seven acres of hemp for the first time this year.

Walsh, who had been growing medical marijuana for the last couple of years, said he decided to switch to industrial hemp based on the recent glut of pot in Oregon. An article by the Associated Press reported there are nearly 1 million pounds of usable flower in the system, and an additional 350,000 pounds of marijuana extracts, edibles and tinctures.

“Basically, there’s so much marijuana around that it’s almost physically impossible to get rid of it,” Walsh said.

Walsh said he is growing hemp for the CBD extract, a market he believes will remain profitable for at least the next year or two before more competition enters the marketplace.

“I’m hoping to get in early enough to get some plants and ... prosper,” he said. “Right now, there’s quite a bit of demand.”

Brandon Scales, of Northwest Hemp Commodities, registered his business with the state earlier this year. He and his business partners are growing hemp at several locations statewide and working to open a storefront selling CBD oil extract and products in Salem within the next few months.

Anthony Rushford, a seed geneticist who has bred more than 200 strains of hemp, joined Northwest Hemp Commodities to help create a vertically integrated company, from seed to final product.

“I really think this is going to be a huge thing,” Rushford said. “The possibilities are endless.”

Scales said they also hope to break into the fiber and hempcrete markets as the business develops.

“Every part of that plant has a purpose,” Scales said. “I just see how beneficial it is and how many people it’s going to be able to help, and help the planet at the same time.”